My girlfriend and I decided to go on a quick 2 night trip to Vegas for a quick getaway! Dan graciously offered to watch M while I was gone for the weekend. :)

The main reason for this trip (besides getting away for a little bit) was a food trip! I have long heard about the Oyster Bar's famous Pan Roast and wanted to try this. There's a few other places as well that were on my list so we decided to go for it.

We booked tickets on Southwest, and we stayed at the brand new SLS Las Vegas. They had a pretty good rate since they just opened.

The SLS is a pretty famous/hip hotel chain in the US. I have never been to the one in LA but heard good things about it.

When researching hotels, I noticed that they were opening up a new SLS in Las Vegas. It turned out they were renovating and rebranding the hotel previously known as the Sahara. Interestingly, the Sahara hotel was the first hotel I stayed in when I first came to Vegas with my mom in 2000!

The hotel offered valet or free parking. We took advantage of both depending on how long the lines were.

Check-in was pretty easy, although the check in lady didn't know much about the hotel when we asked for information about parking or restaurants. She seemed confused and mumbled her answer, which was not good. :)

The lobby area was a bit dark and there's small shops/stores, restaurants, as well as casino.


My first impression was that the hotel has a very quirky design.  For example, above our bed there was a poster of people running a marathon?

As they didn't tear down the building, the rooms were on the smaller side (unlike newer hotels where the rooms are more like suites and can fit 10 people!)


The bathroom had a tiled shower and a single sink. As I mentioned the quirky design, you can see for yourself in the picture below. :)

We actually had fun playing at the casino (my first time!) at the SLS, since their buy-in was cheaper and was convenient as we could just go up to our room afterwards. Both dealers that we had were really, really friendly.

Where We Ate in Vegas

Vegas is almost like a foodie town. A lot of famous chefs open up a restaurant in Vegas (Joel Robuchon, Thomas Keller, Nobu Matsuhisa, Bobby Flay, Giada de Laurentiis -- to name a few). There were too many food choices. We didn't really want to do fine dining during this trip, so here's where we ate.

My friend recommended this place as she saw it on Food Network during Guy Fieri's diners, drive inn show.

They are famous for their oxtail fries as well as wonderful selection of burgers.

The oxtail fries were pretty good. The oxtail topping was slightly sweet and very moist. I was a bit disappointed that their fries were just regular fries and nothing unique, but overall this was a good dish.

The patty was very moist and I love all the toppings. It tasted unique and Japanese like (thanks to the furikake)


We both liked this restaurant and glad we tried, although since there's so many food places in Vegas, we probably won't come back here particularly.

When a restaurant has more than 2000+ reviews with 4-5 star ratings in Yelp, you know this is one of a must try restaurant. This restaurant IS very popular and we made reservations beforehand since I know there would be long lines otherwise. The location was a bit weird (shady?) in a strip mall with questionable stores :)

We got early dinner seating (6 PM) and were still full from lunch at Bachi Burger so we only ordered two things.

Looking at their menu, this restaurant was a bit more unique than the typical Thai restaurant. As an example, for Pad See Ew, at most restaurants you can get it with Chicken/Pork/Beef/Tofu. At Lotus of Siam, you can get Pad See Ew with any of the followings: Fried Duck, Fried Seabass, Crispy Prawns, Soft Shell Crab, etc. You get the point. :) Yummy noodle with fried toppings are always better.

The first dish we ordered was their garlic prawns, which was wonderfully crispy and garlicky! :)
I wanted to try the Crispy Duck curry, but my friend was not a fan of curry so we ordered this instead.


The second dish we had was the Crispy Duck Pad See Ew, which was so wonderful with the crispy duck topping!


Food was excellent! [Although I think I can taste the MSG :)]
But I do recommend this place if you want some good Thai food in Vegas.

When I used to travel for work, whenever I went to New York, I would always make a point to visit Serendipity for their famous Frozen Hot Chocolate. It's been a few years since I last had it so I convinced my friend that we had to visit their store in Vegas.


We made the mistake of parking at the Employee parking lot which made our walk VERY long. Additionally, the restaurant was located at the other end. I think we walked like 2.5 miles or something crazy like that!

We ordered the small frozen hot chocolate. It was good, but not as good as I remembered it, so overall slightly disappointing. Not sure if it was just this location that was not that good, or if maybe I have tasted many better things since my days in New York previously?

You can't go to Vegas and not have buffet. Vegas is famous for its buffets. You can find cheap ones that probably only cost $6.99, to nice ones such as Bacchanal at Caesar's, Bellagion, Wynn's, or Wicked Spoon. I liked the buffet at Bellagio a lot, but wanted to try something new, so it was between Wicked Spoon and Bacchanal, and in the end we went with Wicked Spoon which was located at the Cosmopolitan Hotel.

I have never been to the Cosmopolitan hotel, and thought it was nice and modern looking, and I liked that I didn't have to walk through the smoke filled casino to get to the restaurant.


We went at around 10:30 AM and there was already a long line. I think we waited 20 minutes-ish. They have a separate "priority" line, I think for people who were either staying at the hotel, or people who were "invited" by the hotel.

The buffet was pretty humongous. One of the things I heard about Wicked Spoon buffet was that they have some items in individual portion size, which is good for presentation and is supposed to help with portion control.  They also have more "luxurious" items such as bone marrow -- which is pretty rare for buffets.

On my first plate, I went with carbonara pasta, bacon, takoyaki, fried squid skewer, eggs benedict, pancake, and french toast. Most of the food tasted okay, nothing extra special. I was a bit disappointed with the takoyaki and the fried squid skewer as they were cold.


For my second plate, I tried the bone marrow, fried chicken wings, sliced meat, guacamole, and mashed potatoes. Again, everything was just okay.


After my second plate, I moved on to the dessert table buffet. They have a pretty good selection. The chocolate covered strawberries were pretty good, as was the gelato selection. But all the cakes/pastries were all okay and sometimes I feel that the hotel just tried to make different kinds as fillers, but they all look or taste about the same.


All in all, I was slightly disappointed with the Wicked Spoon. I much preferred the Bellagio buffet (although it's been quite a few years since I had it).

Tacos El Gordo is a pretty famous authentic taco place that Dan and I love in Chula Vista (near San Diego/Mexico border). I was happy when I found out that they have branches in Vegas. This restaurant is no-frills, but serve cheap, very authentic Mexican food. I always feel like we are in Mexico when we are inside the restaurant.

They have different lines for the different meats. Unfortunately the lines for the pork was too long (we had to leave soon since we were catching a show), so we just got the beef, which was delicious. Ask for the grilled peppers and onions (it's free, just leave a tip). You can get your own radish on the side. 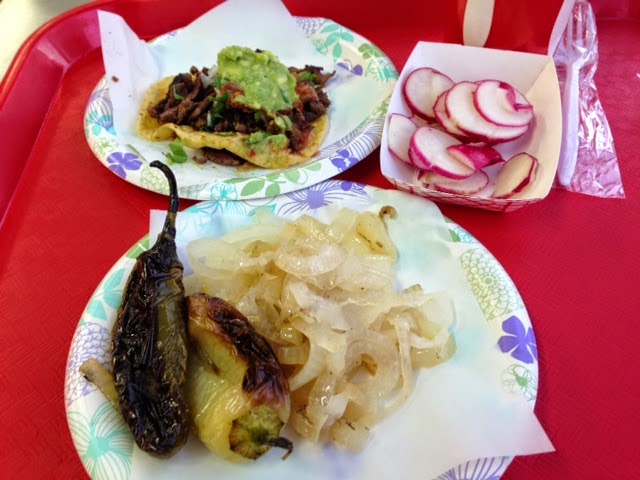 One of the restaurants I REALLY want to try during this trip was the Oyster Bar, famous for their Pan Roast. The restaurant is supposedly open 24/7 and has long lines (1+ hour) at any time of the day (even at 3 AM!).

I made the mistake of putting this off until our last night, thinking it SHOULD be open. When we arrived at the Palace Casino, there was NO line, so I thought, hmmm maybe we just got lucky. As I approached closer, I noticed that the cooks behind the counter were packing their stuff, and then I saw the dreaded, unexpected announcement that the Oyster Bar was closed for Carpet Cleaning until the morning!!!

I was SO disappointed :( since we had to fly out the next morning so wouldn't be able to eat here. There were so many "what ifs" that came through my mind. What if we had come a little earlier? Like for breakfast? What if we came during our first day??