For our second date night in Jakarta, my sister recommended Namaaz, which is a molecular gastronomy restaurant.  Having been to Alinea in Chicago, we were excited to try Indonesia's version of molecular gastronomy to see how it compared. All the dishes would be Indonesian cuisine, which would be interesting to me to see how the chef transformed traditional dishes into various forms.

Namaaz takes online prepaid reservations only, and they serve a maximum of 8 people per night. The cost was roughly $100 USD per person.

There is only one seating per night as they serve everyone at the same time, 7PM sharp. We arrived 15 minutes early and the chef, Andrian Ishak, greeted us at our table. He was very friendly and introduced himself to us and asked whether we had tried molecular gastronomy before. We told him we had been to Alinea before and were looking forward to trying his version. He said he hoped we would enjoy our meal.


It turned out the chef presented each dish to all the tables personally, which I thought was a nice touch. He started out with this phrase:  "What you see is not what you get."  For each course, he gave us time to taste the food and checked back with us afterwards.

There were a total of 19 courses if I remember correctly, and about half were dessert entree. I won't post all the dishes but will highlight some that was very memorable.

The first course looked like raw sliced meat, not very appetizing. :p  But since he said it's not what it seemed, I braced myself and was surprised to taste something very sweet. It turned out to be dehydrated watermelon which was then rehydrated, and sliced in such a way that it looked like raw meat. The watermelon was served with a traditional Rujak sauce. (Rujak is a popular Indonesian fruit salad).

This dish was Satay with charcoal, and when served truly looked like satay with charcoal. However, the charcoal was actually cassava, and the black chars were actually dried squid ink.  It tasted really great too, very similar to chicken satay, but the chicken here was very very moist.

When the chef brought this next dish, I was sure that this was a chicken soup, and wondered why the dish looked so plain. It turns out this was actually fish soup! The actual chicken meat was removed from the bone, and fish fillet was inserted inside the chicken skin. 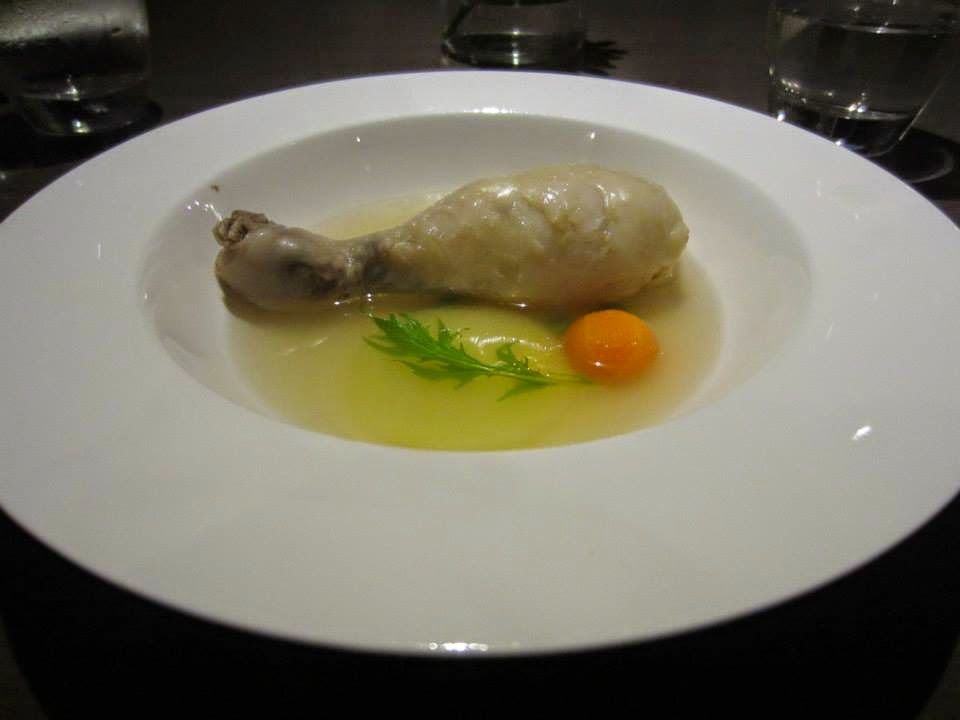 This next dish was a unique take on the traditional kembang tahu. Typically this dish includes soft layers of tofu served with sweet gingery sauce. Chef Andrian made the "tofu" look like instant noodles.

I was so amused when I saw this next dish, which totally looked like a bar of soap! I even thought the towel was edible (turns out it was there just for effect, hehe). So the green soap was actually a white chocolate/mint/butter/biscuit combination that tasted so heavenly. The foam also had a minty flavor to it. I almost wanted to ask for a second serving!! :)

This next dish totally looked like candle! We were instructed to blow out the flame, and then eat everything including the match. This dish was actually a banana inside with some kind of sweet covering.  The "match" was actually a nut.


All in all, we had a very memorable dinner at Namaaz. The dishes were actually quite tasty, and the presentation was very, very clever. It was also very special to me because I could compare the traditional Indonesian dishes to the chef's interpretations.

One interesting thing we noted was that they only served water, no soft drinks or wine/alcohol was available. Probably because the chef wanted us to truly savor the true taste of each dish, though Dan wouldn't have minded a nice glass of wine.

We also inquired about the menu and whether it would change, and he said that they change every "season" which was every 8 months.  Not sure how 8 months constitutes a "season", but ok.

If you happen to be in Jakarta, we recommend checking out Namaaz dining!
Posted by Marcela at 8:37 AM