We arrived 2 hours early to SFO as is customary for an international flight, and I carried baby M using the Beco Gemini carrier, which made going through security a breeze since I could just pass through with her. We tried going to the EVA Air lounge but it was super crowded. Honestly, terminal 2 (domestic) at SFO feels actually nicer than the EVA Air lounge. :p We ended up staying only a few minutes in the lounge, grabbed a few bottled waters, and went to the gate for boarding.

EVA Air calls their business class product, Royal Laurel. They actually don't have first class seats. They only have Royal Laurel, Economy Deluxe, and Economy.  The seat configuration for Royal Laurel reminded us of Cathay Pacific: 1-2-1, with the seats at an angle. 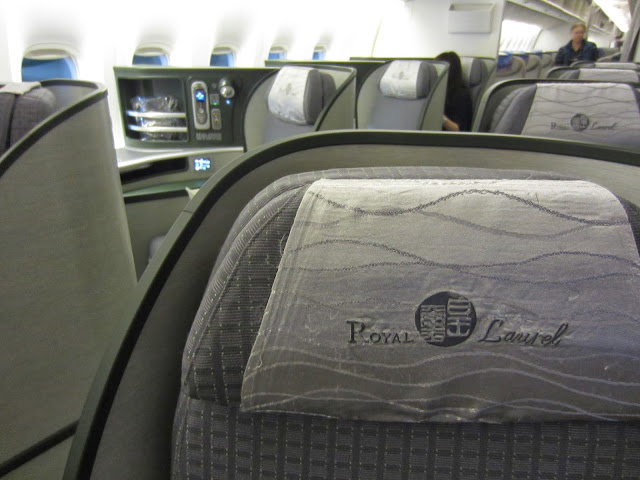 We really like this configuration as it gives a little more privacy. The downside was that this type of seating doesn't allow for a bassinet. The seat does lie down flat all the way which was nice. They provided us with a pillow, blanket, noise canceling headset for use, an amenity kit, and slippers. 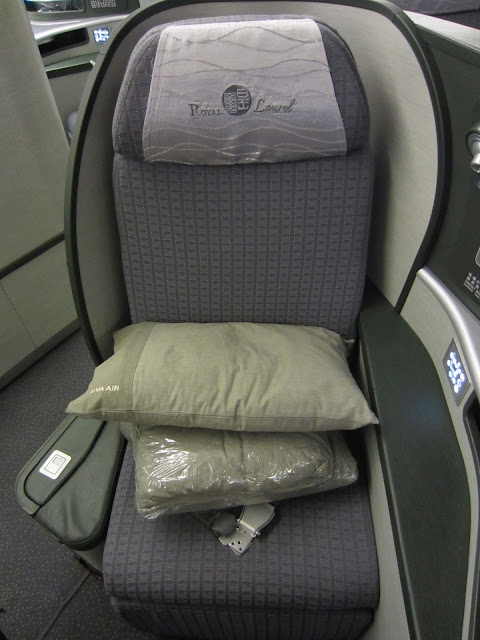 We decided to take turns carrying and holding baby M all throughout the flight. The first leg from SFO to Taipei was a long one, just over 11 hours.  It was really nice having that extra space to be able to comfortably take turns holding our baby, getting up when we needed to, and lying down to rest when one of us was holding baby M. 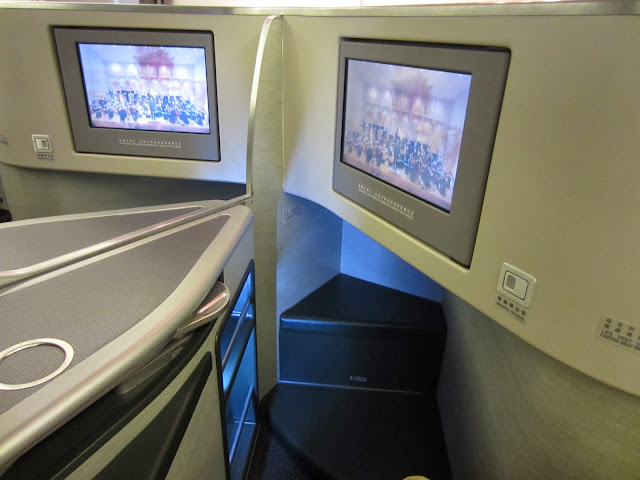 This was probably my first flight in a loooong time where I didn't watch any TV or enjoy the dining experience, because I was too busy carrying/holding baby M to make sure she didn't cry... Dan did get to watch a couple of movies though and ate complete sets of meals, he he... I guess this is the sacrifice of being a mom. :p  I must have been too tired and fell asleep during meal time, and by the time I woke up the meal service was done, and I was sooo hungry. So I asked for a snack and opted for the dim sum plate which was quite yummy. Afterwards I was still hungry so I asked for another dim sum plate. :) 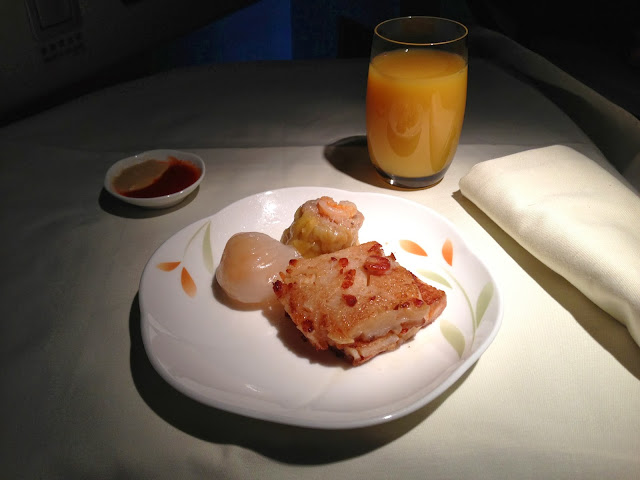 Overall the seat, flight, and food were good...although I would have to say traveling with a baby totally changed our priorities and experience. Gone are the days (at least temporarily), where flying business involves sleeping for 6-7 hours, watching movies, and resting. Now our main priority is to keep baby happy at all cost, including less or no sleep for us. Thankfully baby M did pretty well for her first flight! A couple behind us told us how well behaved she was after the flight! Phew...

After landing in Taipei, we went straight to the Infinity Lounge to get some snacks, shower, and some much needed rest. The lounge appeared to be very new and had a modern/club/futuristic decor to it. 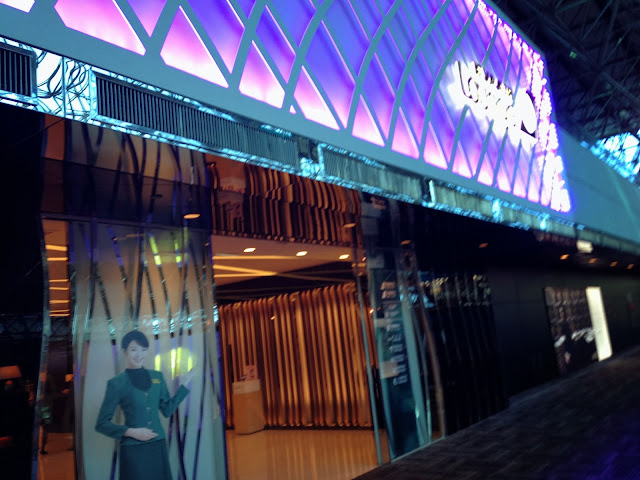 We put our name down for the shower room because there was a waiting list. They gave us a buzzer, and we walked around to look at the food options. We didn't have to wait that long and were given keys to the shower room. The shower room was clean and adequate in size. They provided us with a clean towel, toiletries, etc. The one cool thing I noticed was the heated toilet seat. 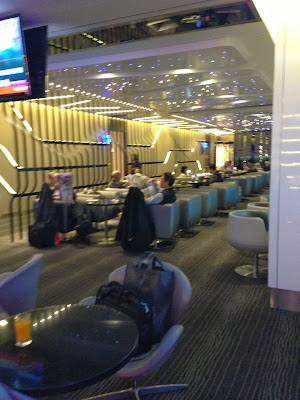 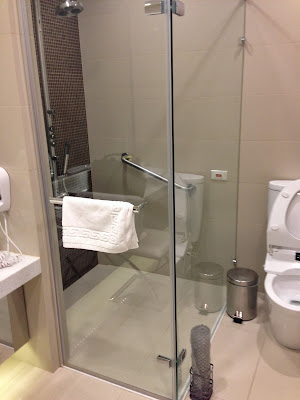 We also checked out the Hello Kitty baby room where they provided diapers, wipes, and a nice sized changing table. We also used the room to wash baby bottles. The room could also be used to feed or pump if needed. Overall EVA Airlines scored by providing this much needed room for families! 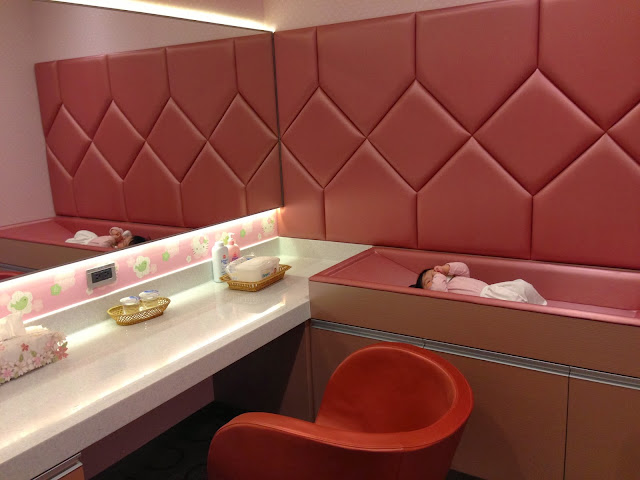 By the time we each took a shower and got baby M ready for our next flight, the 3 hour layover had passed, and it was time to head to the gate for boarding. It's funny how time passed sooo fast in between flights when traveling with a baby. :)

The plane from Taipei to Jakarta was noticeably older, with a 2-2-2 seating configuration. However, it was still pretty spacious. The flight was surprisingly pretty full. We got the bulkhead row and they actually set up a bassinet which was pretty useful. We were able to put baby M in the bassinet for a little bit which gave Dan and my tired arms a bit of a break. :p 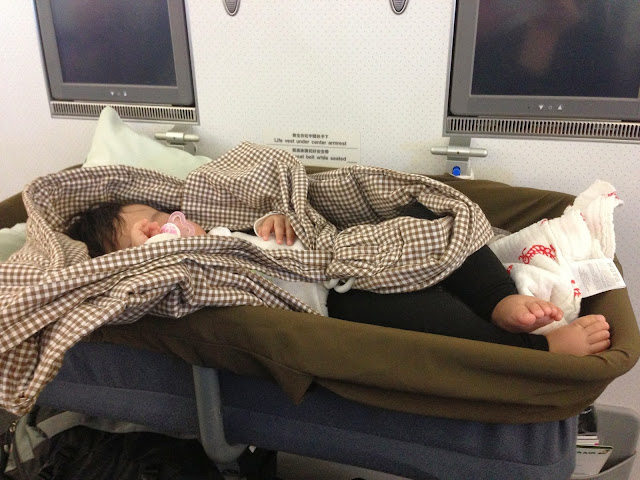 Again, I didn't really watch any TV and preferred to sleep instead while I could.

Service was really good, and maybe a bit better than the first leg. The flight attendants were super understanding of us having a baby. One of the flight attendant introduced herself as a mom and that she would be more than happy to help out as needed which was much appreciated. One of the attendants actually took baby M for a little bit when she was really fussy while I was in the bathroom and Dan was struggling to calm her down.

Total flight was around 5.5 hours, and we were just ready to get to Indonesia! Once we landed, Dan & baby M lined up to pay for the visas on arrival while I passed through immigration and waited for them in the baggage claim area. Our bags were already waiting and we got out of the airport in no time.

Overall, we thought baby M did pretty well for her first international flight! We were really worried beforehand, mainly that she might cry for the whole flight. Thankfully she was pretty good, so hopefully that means more travel as a family in the future. :)

A couple tips when traveling with baby/infant: