Immediately after the wedding, we started to do some research on Maui. We got some great suggestions on activities, restaurants, and other general tips from friends and also from my trusted travel site, TripAdvisor.

Maui had an abundance of activities: snorkeling, biking down the mountain, sunrise tour, helicopter tour, road to Hana, etc. 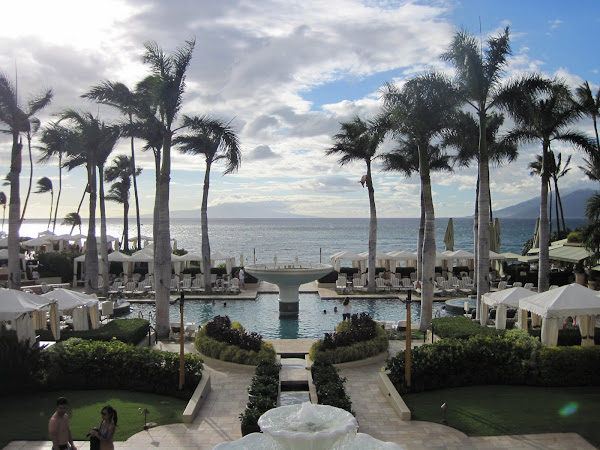 A couple tips:
* If you do the Haleakala sunrise tour (which means leaving your hotel at 3 AM), do it the very next day after you arrive (while still adjusting to the time difference). Also, wear LAYERS and bring hats and gloves since it's really cold up in the mountain.
* Try to do activities in the morning. The trade winds pick up in the noon-afternoon time, and it got VERY windy around the island.
* Go to Ululani shave ice as many times as you can!
* Take dramamine for snorkeling tour, road to Hana, or helicopter ride (as needed).

Finally the day we had been waiting for came. It felt like it'd been so long since our honeymoon, although really it's been only three and a half months :p We got an early flight at 9 AM and arrived in Maui at 11 AM. The airport was FULL (since it was Labor Day weekend). When we got to Maui, we picked up our luggage and went to the car rental to pick up our car. The line was SUPER long. Thankfully it moved pretty fast, and we were out with our car soon enough. We decided to get a convertible since a lot of friends suggested this option. We're glad we did! It was nice to be able to drive with the top down!

First stop was the Geste Shrimp Truck in Kahului, which was really close from the airport. We got the Spicy Pineapple shrimp, and it was excellent. In fact, it was Dan's most favorite food of the whole trip.

Next stop was Ululani shave ice. This place was the top rated shave ice place of all Maui, and it totally deserved the honor. The ice was SOOO soft, and the toppings were home made.

We wanted to do the Haleakala sunrise tour since it seemed to be one of the activities unique to Maui. We decided to do this early on our trip while still adjusting to the time difference. In order to make it to the top of the Haleakala crater by sunrise, we had to leave our hotel by 3 AM. We decided to do the tour so we didn't have to do the early morning drive. We went with Polynesian Adventure Tour and were pretty happy with the experience. Haleakala is the fourth tallest mountain in the world and the sunrise view was pretty amazing. There were a lot of people at the top of the mountain waiting for the sunrise. It was really cold, and thankfully we came prepared. We saw some people wearing sandals and shorts...not smart! :)


After the sunrise trip, we went to lunch at Da Kitchen Express in Kihei and got the Loco Moco, which is a traditional Hawaiian dish: burger patty with eggs and sauteed onions topped with gravy. And of course with a side of rice and macaroni salad. Talk about heavy! It was sooo good though! I've heard that Da Kitchen has the best Loco Moco and they totally delivered.

That night we decided to splurge on dinner and went to Spago at the Four Seasons, which is a Wolfgang Puck restaurant. I was quite excited to try and I read about this early bird promotion for a $49 three course prix fixe menu (between 5:30 PM-6:00 PM), which turned out to be perfect because we also saw the sunset. We were both not that impressed with the food at Spago, but we did enjoy the ambiance and the view.

Another early morning for us! We decided to do the AM snorkeling tour with Trilogy, and we had to be at the harbor by 6:15 AM. The crew at Trilogy were AWESOME and very friendly. They also served good food. We LOVED the cinnamon bun that they serve in the morning. Snorkeling was fun! We went to Molokini crater and turtle town. The water clarity in Molokini was amazing! We didn't see very many fish, but some, and the experience was great. We then went to turtle town and saw a turtle swimming very close to us.


That night we went to the Old Lahaina Luau, which is supposed to be one of the best luaus in Maui. The seating is reserved based on when you made the reservation. We booked it a couple months early and got great seats! Food was buffet, and they served traditional Hawaiian food. The show was pretty good, although I think after a couple of performances Dan and I were pretty bored :p Overall we would recommend this luau though. Everything went very smoothly...great food, great ambiance.

Everyone said that the Road to Hana is a "must-do". We heard that the drive was brutal (600+ turns), and many one lane bridges. Neither Dan nor I wanted to drive, so we decided to ride in a tour. We heard Temptation Tour does a combo Road to Hana/Helicopter tour and decided to do this option. It was definitely pricey, but considering that it included the helicopter tour, we thought it was worth the price. The van was quite luxurious and carried only 6 passengers. The road to Hana was definitely beautiful, but it was pretty similar to what we've seen in other tropical places. On the way to Hana, we stopped by this place called "halfway to Hana" that sold great banana bread. Delicious. Definitely stop by if you do the drive.


After lunch, we were off to our helicopter tour. We were both so excited since this was our first time. We were originally supposed to do the Hana/Haleakala tour for around 40-45 minutes. However, the Haelakala crater was closed that day due to cloudy weather :( so we only got to do the Hana helicopter tour. We got the front seat (yay!) which was great since I was not sure how much we could see if we got the back seat. The pilot actually assigned where to you sit based on weight.


The views from the helicopter were absolutely amazing! The tour ended a little early though (I think it only lasted 30 minutes), but oh well, we still had a great time.

After the helicopter ride, we went to Ululani shave ice (again) since it was close to the airport :) We tried the Haleakala flavor which is a combination of coconut milk and lychee. Mmm...

That night we went to Sansei sushi for dinner. They have a 25% off special if you have dinner before 6 PM. We'd heard rave reviews about this place so had pretty high expectations. Food was good in general but not out of this world.

Wow. Time does flies when you're having fun! Couldn't believe our vacation was almost over already. We planned a pretty "chill" day. We had breakfast at Kihei Caffe (love this place!), and then went to the pool in the morning to relax. Afterwards we got ready for our couples massage at Spa Grande, at the Grand Wailea hotel which was just next door from our resort. The Grand Wailea was a HUGE resort, almost had a disney-esque feel to it, but definitely beautiful! Spa Grande has been rated one of the top 10 spas in the world, so I had high expectations. The spa was definitely beautiful and had lots of amenities, but was a little older than expected. Nevertheless the experience was still great.

After the spa, we decided to visit the "west" side of the island (Lahaina/Kaanapali). We went to the Whaler's Village and visited the Whaling Museum. After that we made a quick stop to downtown Lahaina, which was a cute town with character and saw the huge banyan tree. We also got the ice cream sandwich at Hula Cookies.

For dinner, we went to Mama's Fish House. We made dinner reservations a couple months ago and requested window seating. The view was so picturesque. Food and service were good. Their menu is printed daily, and they even included the name of the fishermen that caught the fish that day. It's that fresh!

When we were waiting for our valet car after dinner, we saw Paris Hilton and her boyfriend. I wanted to take a picture with them but Dan said no :( so we just took a picture of them from afar. That was definitely a pretty interesting experience.

Our last day in Maui :( We didn't really have anything planned except for trying to eat as much as we could...ha. We started off with pancakes at Kihei Caffe, which were delicious! We then checked out of our hotel, went to Zippy's to get the hot Malasadas (doughnut), lunch at Da Kitchen (Hawaiian plate and deep fried spam musubi - which was EXCELLENT), and then Ululani for our last shave ice before leaving. Needless to say, we were both VERY full and happy :)


In summary, we had a great time on our first trip to Hawaii, filled with lots of food, activities, and good times. Where to next? Hmmm...
Posted by Marcela at 10:13 PM