My family wanted to get together over Christmas holiday, and after some back and forth on where to go, they decided on Hawaii. The funny thing is we just got back from Maui a couple of months earlier. But, how can you say no to Hawaii?

Considering my family big appetite for shopping, we decided on Oahu. We felt that they would be super bored on the Big Island or Kauai.


We didn't realize how commercialized and city-like Oahu would be, especially around the Waikiki area. We wanted to stay around Waikiki since it's closer to the shopping malls and also close enough to the beach. The majority of tours also provide free pick up from Waikiki hotels, so we thought it would be a nice base since we were not renting a car.

We arrived one day early to relax. Since we decided not to rent a car for this trip, we took the Roberts Hawaii airport shuttle, which was easy enough (around $15 pp round trip). We booked the Waikiki Parc hotel, which was in a great location, but the hotel was a bit older than the pictures. It truly was in an almost perfect location though, close enough to the beach and only one block away from Waikiki shops.

After dropping off our bags at the hotel, the food adventure began! First stop was Puka Dog. I saw Puka Dog a couple years ago on Food Network and had always wanted to try it. Basically it's a hot dog with fruit relish. The bun is also slightly different than a regular hot dog bun (the hot dog is inserted inside the bun). It was....interesting :) After Puka Dog, we found a takoyaki place just around the corner, which was just ok. We realized that there was a lot of Japanese influence in Hawaii, especially in Oahu. There were tons of Japanese restaurants and Hawaiian people of Japanese descent. 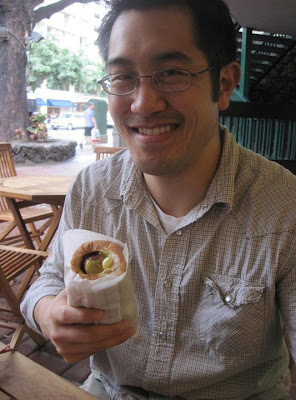 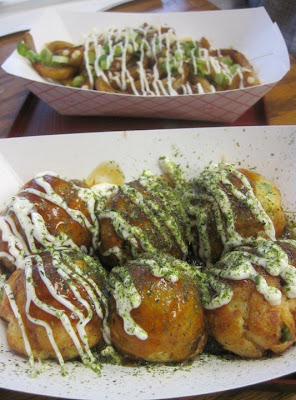 Originally we wanted to go to Alan Wong for dinner, but did not make reservation. Should have known better :p We were not able to eat there and went to eat at Hula Grill instead. Hula Grill is very touristy, and the view was wonderful but food was just blah. We should have done more research and booked somewhere else beforehand.

My family arrived in the morning. After they checked in, we decided to go to lunch at Morimoto Waikiki, which just recently opened in Oahu. Morimoto Waikiki is located at the Waikiki Edition hotel, which is a very modern, luxurious hotel. It's located at the other end of Waikiki, but the hotel itself looked fantastic! It was a bit too far to walk, so we decided to take a cab from our hotel. Much to our surprise, the hotel concierge booked a stretched limo taxi for us. We were nervous on how much it would cost, but it was surprisingly affordable (cheaper than taking 2 taxis). My family had fun riding the limo and took so many pictures inside and outside the limo :p

Food at Morimoto was ok. Maybe we had really high expectations. Price was actually not bad for lunch. After lunch we went to the Ala Moana Mall for a few hours, and then rested and got ready for dinner at House Without a Key (HWAK) at the Halekulani hotel. The Halekulani hotel is actually the sister hotel of Waikiki Parc where we stayed. It's just across the street and the hotel was absolutely beautiful. HWAK's setting was beautiful. Truly made us feel that we were in Hawaii, although the food was just so so.

We decided to wake up early morning to do the Diamond Head hike. My older sister is the only one in my family who is somewhat active...haha...so she wanted to come along for the hike. Everyone else preferred to sleep in. The hotel concierge told us that we could just take the bus to Diamond Head. WRONG! We waited for probably 30 minutes until we finally decided to just take a cab. We didn't wake up early enough to see the sunrise, but the hike was still beautiful. Try to come earlier in the day so it's not too hot. The hike itself is not that hard. We were done in maybe 1 hour? There were lots of stairs to climb toward the end, but wasn't really too bad. The view from the top was beautiful.


We were back at our hotel around 9 AM, just in time to wake up the rest of my family :) We walked to Eggs N Things for brunch. The line was sooooo long and we finally got a seat after waiting almost an hour. Food was pretty good.

We went on the Pearl Harbor Tour in the morning. Dan really enjoyed this particular tour. We were done around 2 PM and then rested for a little bit before heading to a luau. When trying to book the luau, we really wanted to find something economical since there were the 8 of us. When we went to Maui, our luau costed around $100 per person, which was definitely not doable for 8 people! So I found this really economical luau at the Hale Koa hotel in Waikiki for $50 per person, which is unheard of! We read the Yelp reviews and it was decent. After having been to one of the best luaus in Maui (Old Lahaina Luau), we were underwhelmed with the experience at Hale Koa. You only get one watered down drink (vs unlimited at Old Lahaina), and the grounds of the luau was a garden setting (vs beachside at Old Lahaina). Food and entertainment was also very disappointing. However, due to the price, we did not complain :p 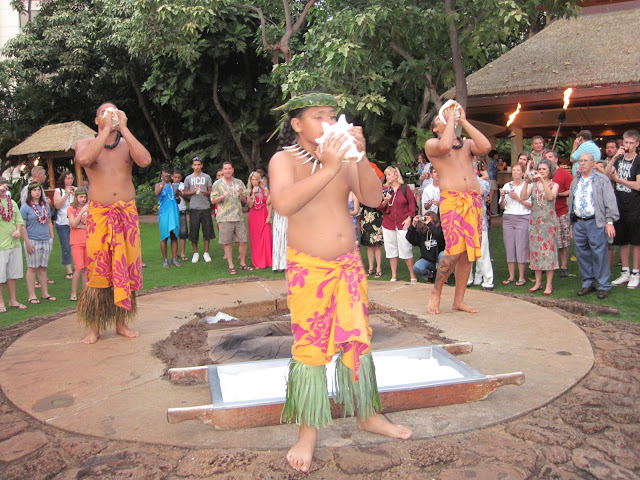 My mom made a comment that the food tasted like "cafetaria" food and that the show reminded her of a wedding in "kampung" - (kampung is traditional village in Indonesia). All in all, we had a great time, but we probably would not repeat this particular Luau experience :) 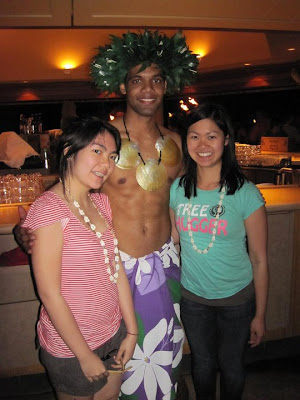 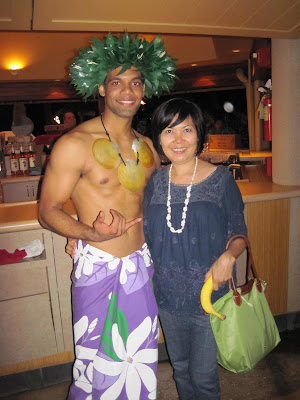 We rented a car for the day so we could go to North Shore, as well as visit some of the food places that were not around Waikiki. We went to the famous Leonardi's bakery to get malasadas (sooo good! especially when it's warm). Next stop was Rainbow Drive Inn. This was by far our best meal in Oahu (try the loco moco). Very low key but food was awesome. We stopped by Dole Plantation on the way to North shore and went in the world's largest maze. It was boring (We think it's really for kids) :p Next stop was Matsumoto Shave Ice. It was disappointing. The syrup was just ok and the ice was rough. Ululani in Maui is MUCH better. Next stop was Giovanni's shrimp truck. It was really good and oily! There were TONS of shrimp trucks all around North Shore, but from what we've heard, Giovanni's is supposed to be the best.


Afterwards we continued our drive to North Shore, and attempted to park at a beach. We were not able to find ANY parking and in the end decided to head down to Waikiki to swim at the beach there. So much for renting a car to go to the North Shore beach :) The Waikiki beach that we were in was very rocky, lots of corals, and the water were not blue (more like brown ish :)
But we still had fun!

Oh so this was Christmas Eve, so we wanted to have a nice dinner. We somehow managed to get a last minute reservation at Nobu via Open Table. Dinner at Nobu was excellent! My favorite was the miso cod and the mochi ice cream dessert. Mmmm.....

Last day in Hawaii. The week went by so fast! We booked breakfast at Ocean House at the Outrigger Reef Hotel which was just across the street from our hotel. The view was beautiful. Food was not bad, HUGE portions (definitely enough to share!). It was a good place to spend our last meal in Hawaii.

Time to plan our next family vacation :)

Some tips and recommendations: