We purchased a bike rental deal from Travelzoo a couple months back and finally redeemed it. We went with another friend couple and picked up our bikes at 10 AM. The rental was from Bay City Bike, and we thought that the bikes were in good condition. We didn't know quite what to expect, but we were glad though that the weather was so perfect! 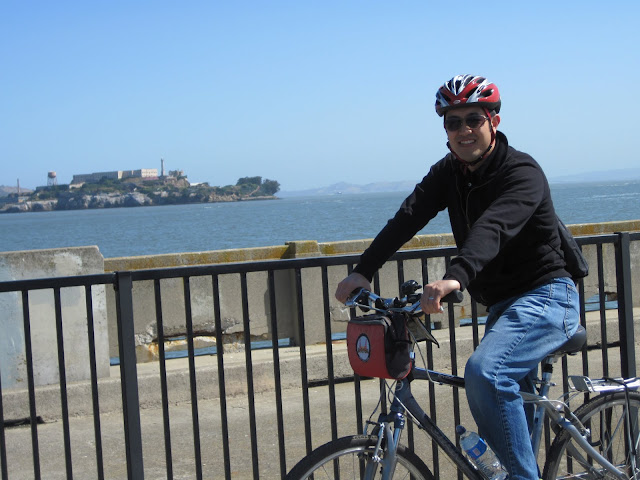 We started from Fisherman's Wharf, and biked passed Fort Mason and the Marina area. There were a couple of hilly areas and the inclines were SOO tough! We didn't realize that the route would actually be quite strenuous. The areas that we had to bike through prior to reaching the Golden Gate bridge was also difficult. As soon as we got to the Golden Gate bridge, the ride was a little easier. There was a slight incline where you had to keep pedaling, but overall wasn't too bad. The wind was blowing really hard though, and the bridge was pretty crowded so we had to be a little careful.

Once we pass the mid point of the Golden Gate bridge, it started to decline so the ride was much easier. After the Golden Gate bridge, we had fun riding down this steep hill, and finally reached this flat area. We thought that this was the end of the hilly part. Boy, we were wrong! The next part was another hill that we had to bike through :( Once we passed that hill, we were finally on a flat area biking to Sausalito.

Our friend recommended this hamburger place called "Hamburgers". There was already a pretty long line forming. They cook the hamburgers on a big grill in front of the restaurant, and you see the cooking as you order your food. Dan & I shared a hamburger and the fries. The burger was simple but good. The meat was very juicy! Afterwards, we went to Lappert to get ice cream. We ordered the white chocolate macadamia ice cream and it was good. Very creamy and lots of white chocolate chunks and macadamia nuts.

We were too tired to even think of riding back :p so we waited in line for our ferry ride. After we got to Pier 1, we rode back to Fisherman's Wharf. For some reason, we started to feel super sore when we were riding back from Pier 1 to Pier 39. By the time we returned our rental, it was already 3:30 PM and we were all super tired.

We then went to Brenda's French Soul Food for a super late lunch. This place was supposed to be really good and reviews said the lines were usually really long. Since we came at an odd hour, there was no line. However, we didn't realize this, they only serve a limited menu from 3:00 PM-5:00 PM. We were a little disappointed since we had specific dishes in mind that we wanted to order. Thankfully, they still served their famous beignets and poboys. We ended up ordering the beignet flight (crayfish, apple, chocolate, and plain), shrimp poboy sandwich, gumbo soup, and red beans & rice with sausage. All the food was excellent!!! We definitely want to come back and try their brunch menu. I missed the Southern Shrimp & Grits, which Brenda's appears to have during their regular menu and hopefully we can try it soon! 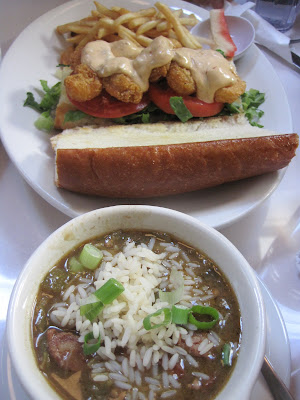 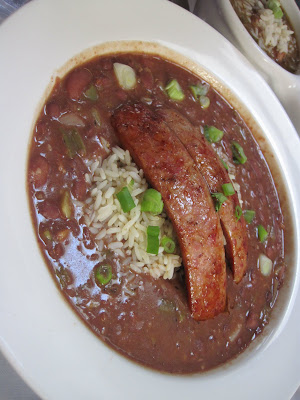 Some tips & recommendations from our excursion: