Since we had such a great biking trip across the Golden Gate Bridge, we booked another biking trip. This time to Angel Island. I have never been to Angel Island, and Dan hadn't been in a long time. So we thought it would be cool to check it out. We went on Sunday of the 4th of July weekend. We picked up our bikes from Blazing Saddles in San Francisco, and then took the earliest ferry from Pier 41 at 9:45 AM.


Someone told us that the Angel Island biking trail was supposed to be easy, so we were expecting a leisurely ride. We're not sure who said it was easy, but it definitely was not! We thought it was actually a lot harder than the Golden Gate biking trip. To add to it, the weather was really sunny and hot that day. The first half of the trail was mostly uphill, with little shade, so it was hard and hot. :( We somehow managed to bike halfway and took a lunch break. Our friend packed sandwiches for lunch which was really good.

During our ride, we noticed a lot of abandoned buildings, which was a little bit eerie. We read some of the board explanations, and it looked like many were old concentration camps for Japanese/German prisoners of wars and/or prisons. Angel Island was also the first point of entry for immigrants coming to the United States from the Pacific side. While we were biking, we saw some segway and tram tours that looked much more fun (or at least easier :p). The last half of the trail was actually pretty easy because it was mostly downhill. 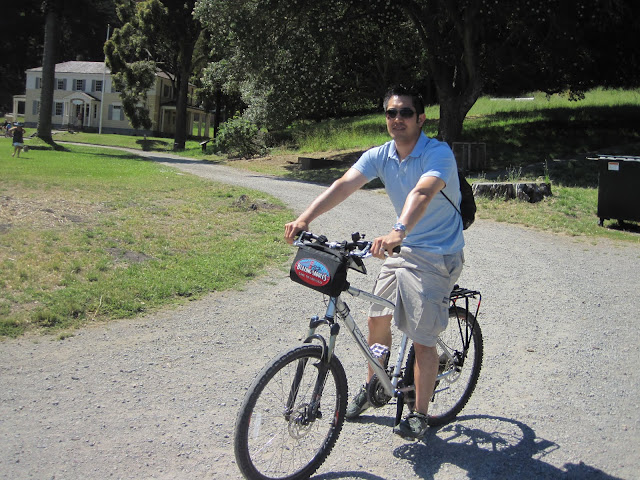 The ferry back to San Francisco did not leave until 3 PM, so we had a lot of time to kill. We waited at the only restaurant in Angel Island until it was time for the ferry ride back. We decided that this was definitely not an easy trip, and we probably won't be biking for a while. :)

A couple tips if you are going to Angel Island: