We stayed at the new Mulia hotel for our first five nights in Bali. I was pretty excited to try out this relatively new hotel in Bali as it had been ranked as the #1 Beach resort in the world as well as #3 on Top 100 Hotels & Resorts in the world per Conde Nast traveler. I first got to know about this hotel from one of my guilty pleasures, the Real Housewives of Orange County. The Wives took a trip to Bali last year and stayed at this very resort!


Mulia is a local Indonesian hotel brand that is known for its quality and good food. The Mulia Jakarta is probably one of the better hotels in Jakarta and is the almost default choice to hold Multi-million dollar weddings for Jakarta's socialites. The Mulia Resort in Bali is relatively new and was quite highly anticipated.

It is located in Nusa Dua which is a more quiet, upscale resort area in Bali. The Mulia is located next to the St. Regis and the Ritz Carlton. I actually like the Nusa Dua area as it is more quiet and not as touristy. However, it is a bit far from places and not as convenient compared to other areas such as Kuta or Seminyak. I didn't mind it though as I liked the seclusion and exclusivity, and being able to enjoy the resort and what it had to offer.


We stayed in the "Resort" part of the hotel. There's another part which is the "Villas". We ended up booking four rooms because there were so many of us. :)  We actually had a bit of trouble booking the four rooms because of limited availability and high prices since we were staying over New Year's.

We arrived mid-day and were greeted with fragrant water by the attendant. The lobby was open air and we immediately felt the humidity. Check-in process was very cumbersome. I think it took at least 30 minutes because they asked for everyone's ID/passports, made photocopies of them, filled out multiple forms manually, and finally also asked for a "deposit" of 1 million rupiah (around $100 USD) for each room per night that we will have to sign for. Since we are booked for 5 nights and 4 rooms, they are basically "holding" $2000 USD on my parent's credit card. I found this confusing and unnecessary, but my parents told me that this was common.


My first impression of the resort was that it was huge, beautiful, and had a more "classical" design (as opposed to modern).  This hotel also did not have many Balinese elements to it. It could have very well been in Mexico or Hawaii, and I wouldn't have known any better.

We booked a regular garden view room for all of us with the exception of my parents who stayed in the Royal Suite Oceans Court room. The hotel was fully booked at the time so we were not able to get rooms close to each other. My parents and I were in building 1 where as my two other sisters were in building 2. The resort was actually quite huge, and it would take around 10-15 minutes to walk from our building to theirs.

The room was actually quite spacious. I'm not sure why, but we got 2 twin beds pushed together. :p  I think maybe I forgot to specify that we wanted a King bed. We requested a baby crib for M, although she ended up co-sleeping with us the whole time! 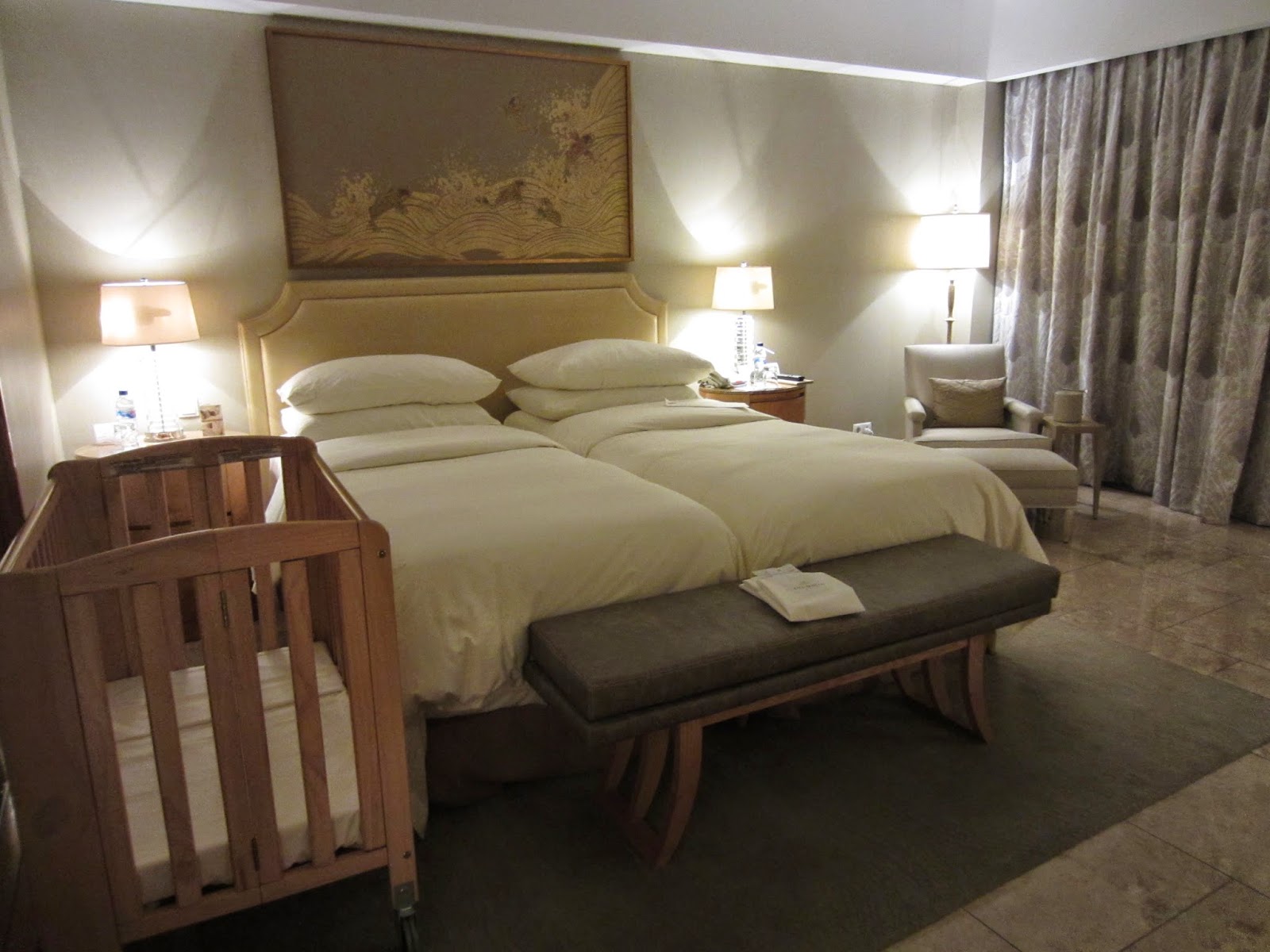 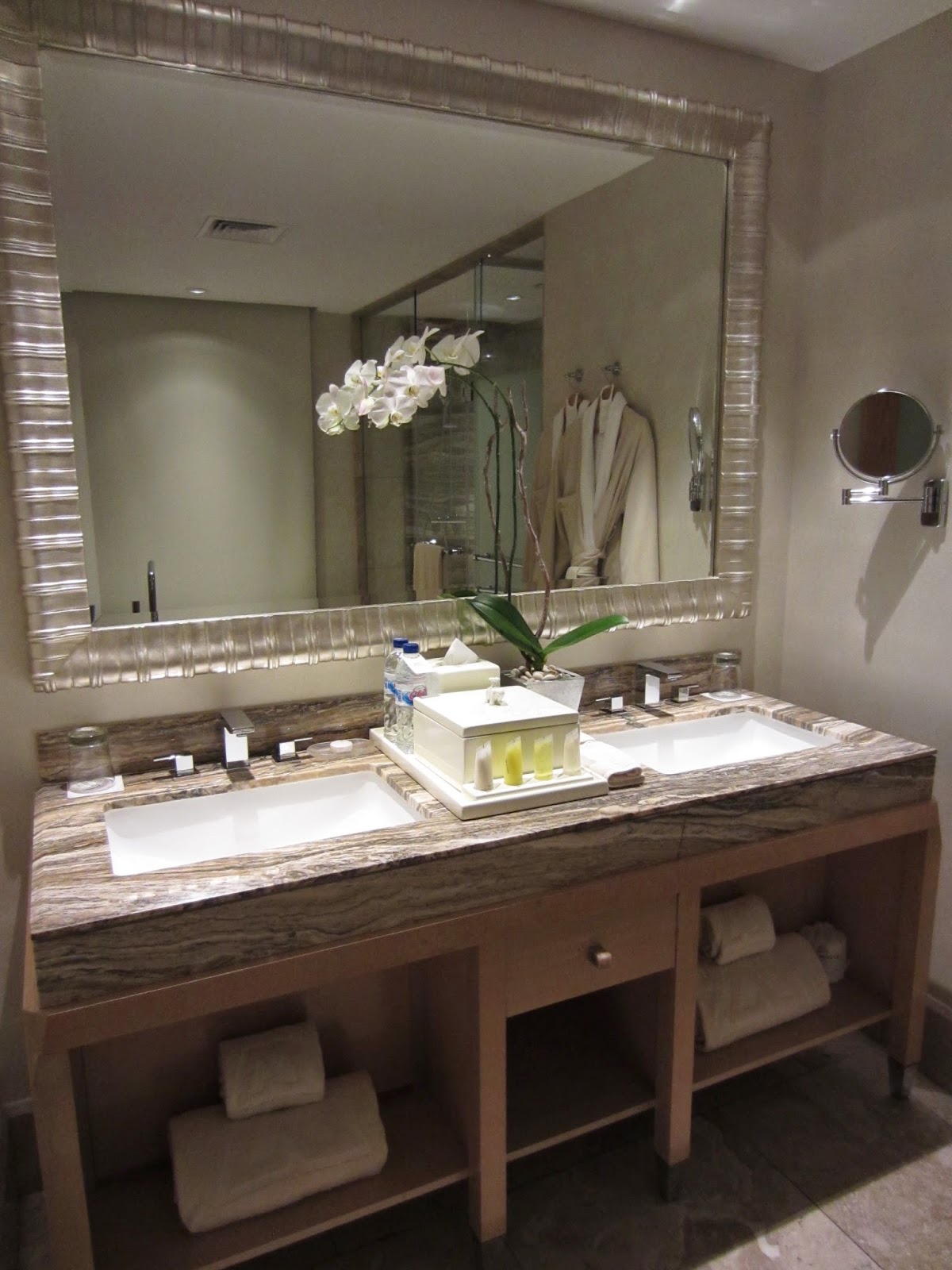 There's also blinds for privacy that can be lifted up which opens up to a glass window that overlooks the room. 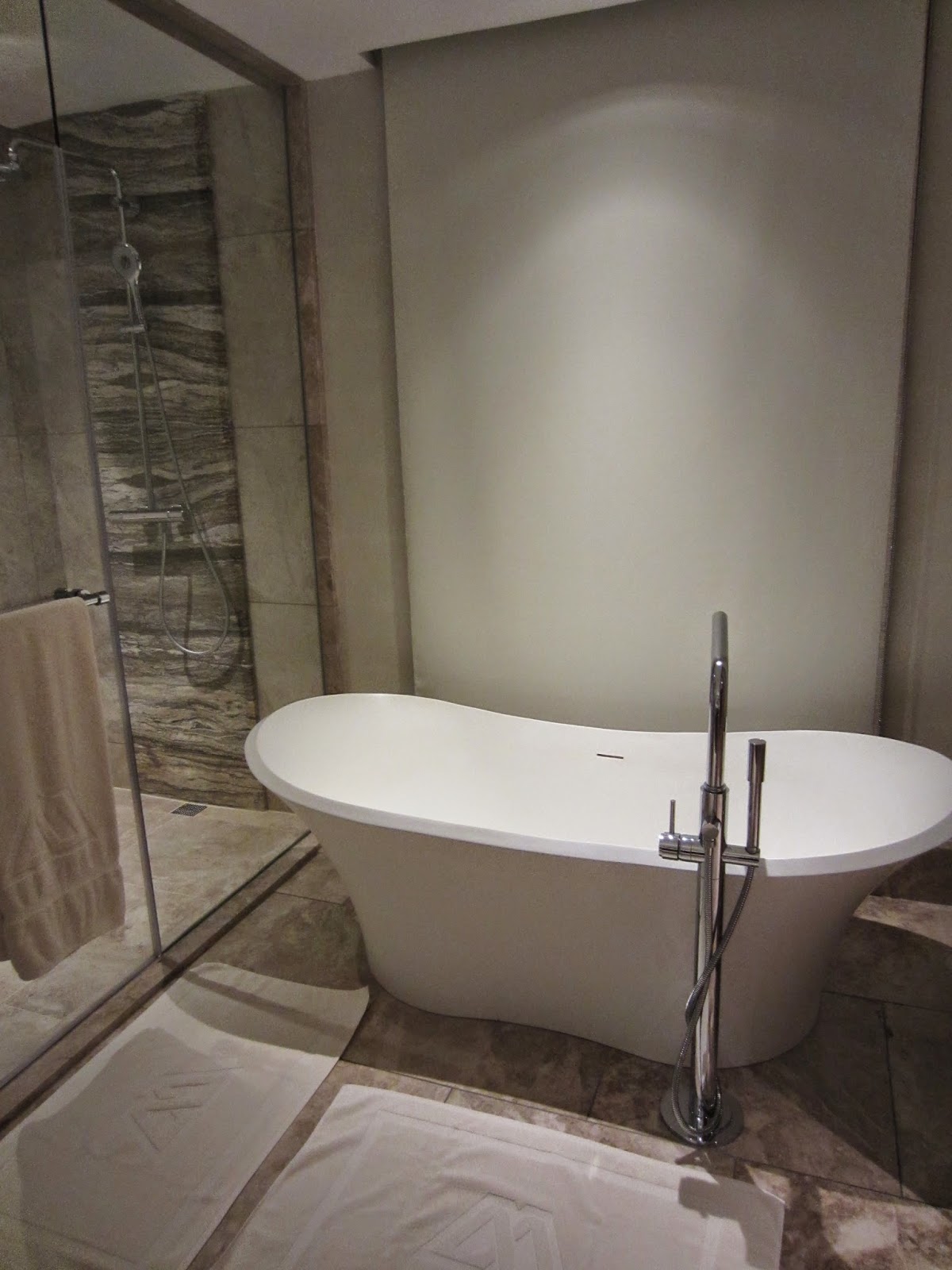 One thing worth mentioning was the super high-tech toilet. The toilet was very advanced/automated - similar to ones in Japan. The toilet seats automatically opens and closes, and there's multiple buttons to flush or clean yourself. :)

One of the great things about the resort being so huge was that it could afford to have multiple pools. They have so many pools (at least four large ones), where it never felt crowded. We especially enjoyed the kids pool for children, and the Oceans Pool for adults.

The kids pool was large, shallow, had some shaded area, multiple fountains, and was just very kid friendly. M loved swimming and playing here with her cousin.


She loved the fact that she could stand on her own in the pool! 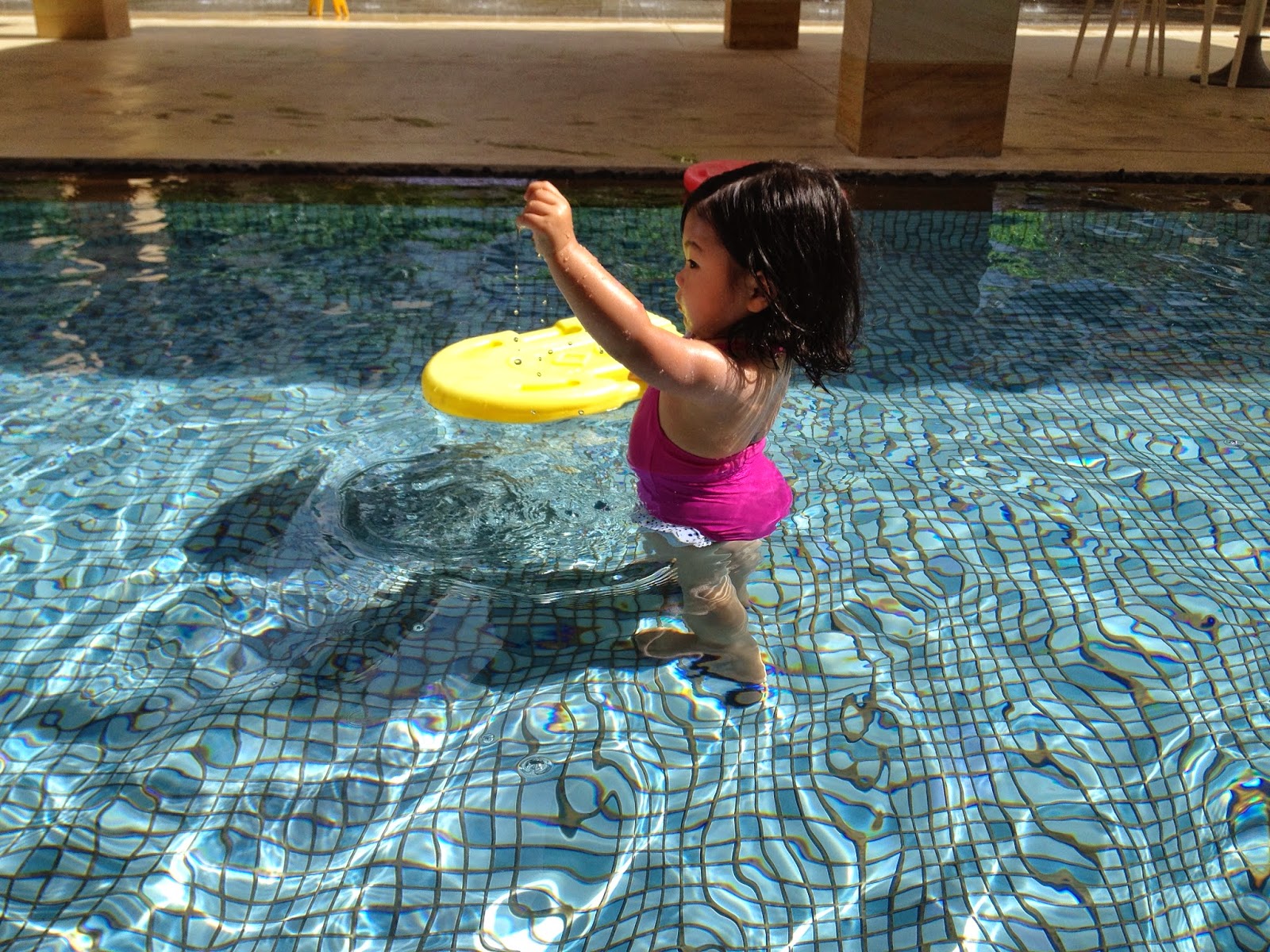 When not swimming with the kids, we really enjoyed the Oceans Pool, which was located in the bottom, closest to the Ocean. It's probably the largest and had a dining area where we ordered drinks and food. I think we spent more time at the pool bar versus swimming...hehe

The beach area was pretty nice. It did feel exclusive because I believe only resort guests have access. So there's not a lot of sellers or people walking around randomly. 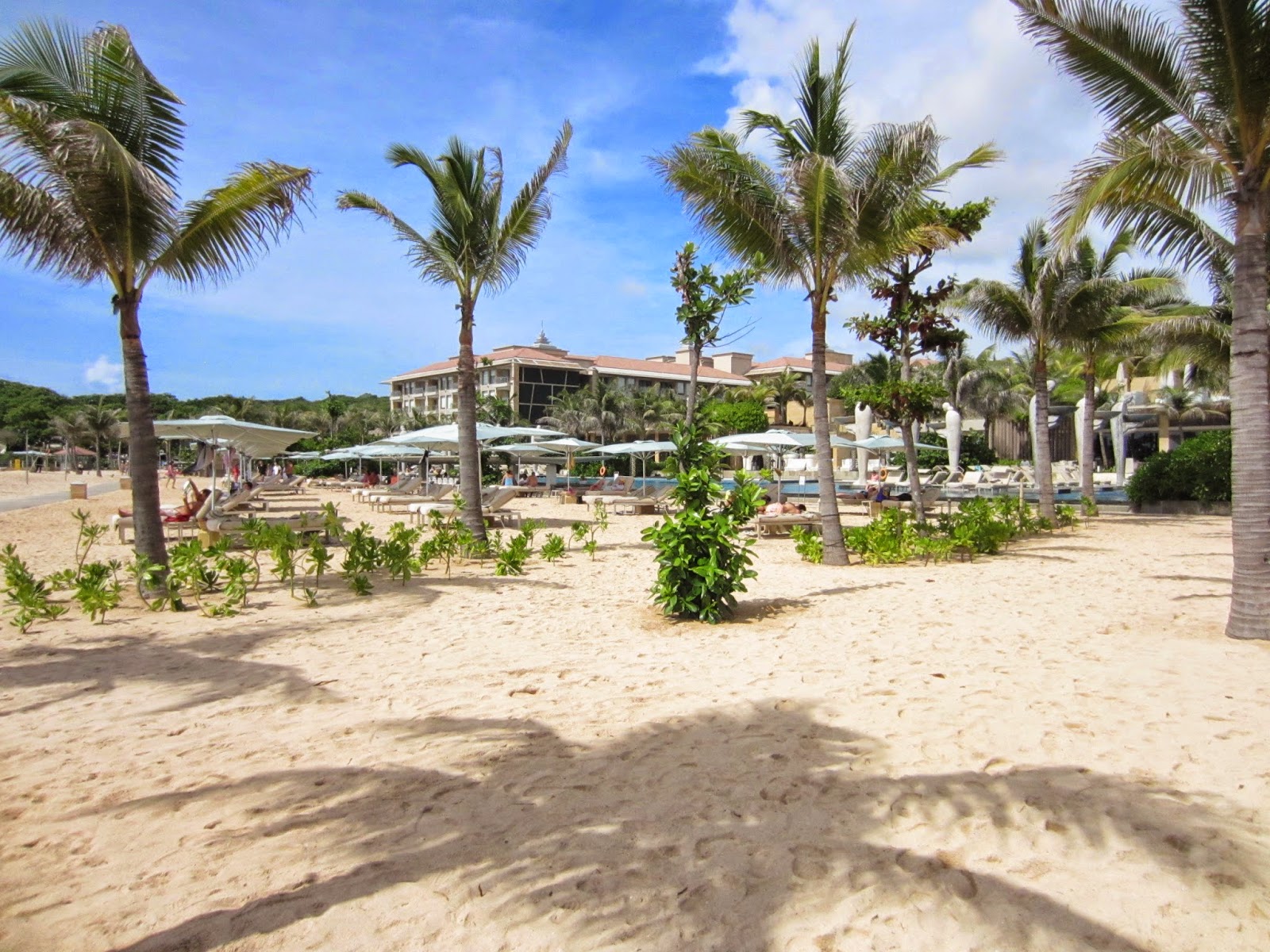 We didn't spend much time at the beach, but we did try the lounge chairs to relax and took a quick nap under the shade which was nice! 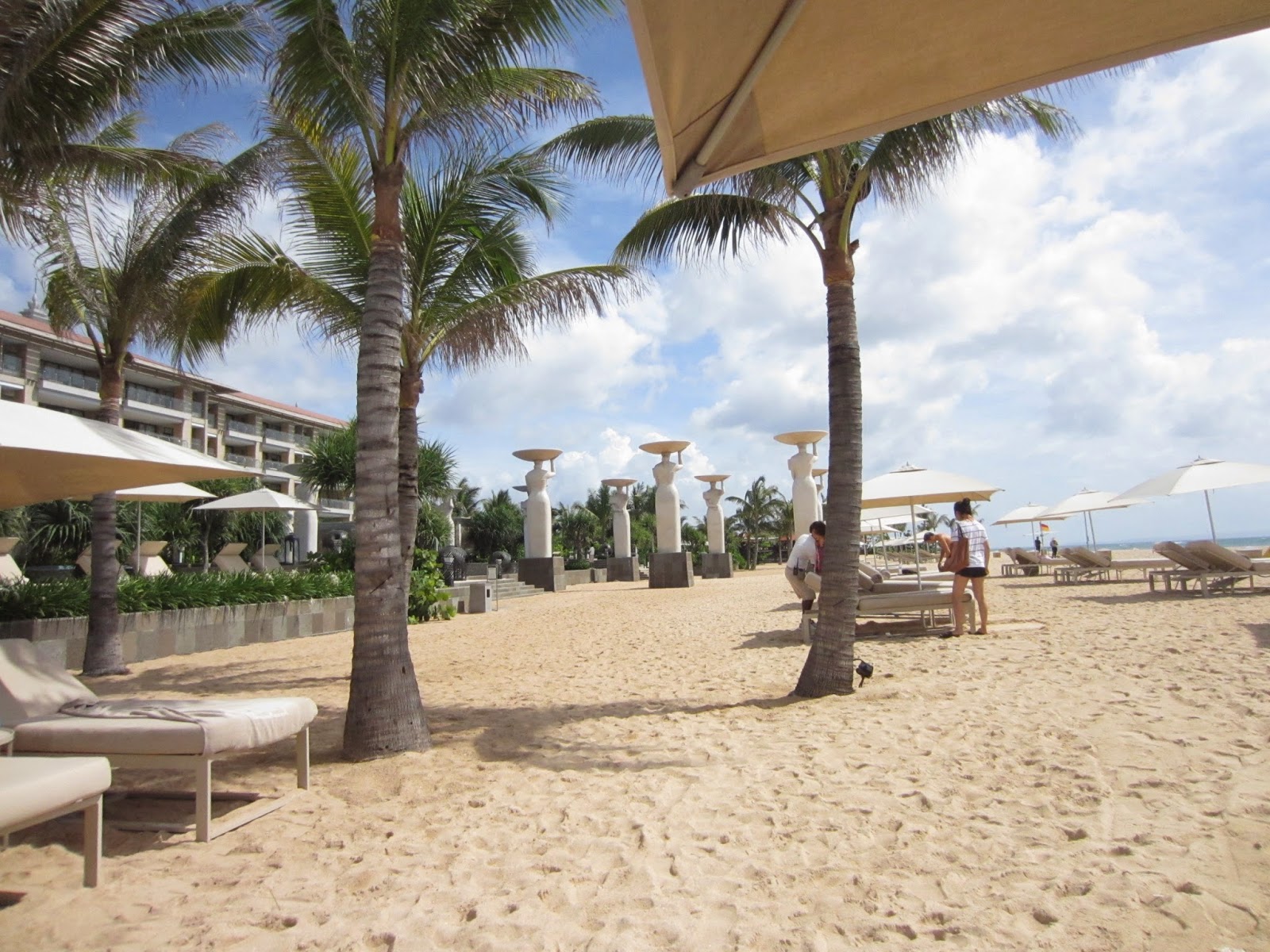 Breakfast was included in our rate and was served at the Cafe. It was huge and plentiful. There were stations for pastries, eggs, pancake/waffle, Indian food, hot food, chinese food, sushi, and fruits. There's definitely something for everyone. We noticed that over New Year's when we stayed, sometimes there's a long queue outside of the restaurant, so make sure to come before 8 am if you are here during peak season.

The restaurant was a little strict with dress code for males. My sister's boyfriend was wearing a sleeveless shirt, and he was asked to put on a shirt over it and was given one by the restaurant to wear!

For New Year's Eve, we had dinner at Soleil. The dinner was included in the booked rate for two people per room. We had to buy an additional seat for my sister's dinner since she was an extra guest in one of the rooms, and the dinner cost $380 USD!  I told her that dinner was more expensive than French Laundry. :)

Dinner was seven courses. It was quite good actually, but a little too heavy.

One thing Dan enjoyed from the dinner was the wine tasting option, as each "taste" was almost like a full pour, so we ended up getting 3 glasses of wine for the price of one taste!

I heard that Soleil serves a mean Sunday brunch. But by the time Sunday cane around, we were all a bit tired of the resort food and decided to cancel our reservations.

Over New Year's, due to the capacity being at maximum, most of the restaurants only offered buffet and they usually cost around $50++ USD per person. For my big family, that equaled to almost $500 per night for dinner, which could really add up. So for one night, we ended up eating at "The Bar", ordering sushi rolls, noodles, etc. to share, and our bill was only $80 USD total for 8 people. Not bad!

As part of our check-in, the hotel included two free drinks at the Skybar, which was located just above Soleil. Dan & I redeemed this on our last night. The setting was actually quite nice as it overlooked the Ocean, and you could look up to see the stars in the sky. But, they closed pretty early (I believe around 11pm).

Mulia has an in-house "deli" which was more like a dessert shop. I loved all the displays. I think they did a wonderful job with the presentation. We tried their version of Lady M's cake, but were very disappointed. :(

I was excited to check out the Mulia Kidz program. They had a pretty nice playroom with different toys and there's a guided activity every hour. They take children three years old and above unsupervised, and younger with supervision. Since we had a nanny while we were in Bali, we dropped M off with our nanny for a couple hours and she loved it.

Mulia Kidz was a great space, although we had a small incident when we were there. M and her cousin were playing in the ball pit area enjoying themselves. There was a boy who was probably 8 years old, watching them play and played around them. All of the sudden, this boy undressed himself and exposed himself in front of the kids. My sister and I witnessed this whole thing and panicked, grabbed our kids, and removed ourselves from the ball pit. We immediately notified the Mulia Kidz staff and it took three people to calm the boy down and force him to put his pants back on!

Afterwards we felt that the staff didn't really try to supervise the boy. So this incident made us feel a bit uncomfortable, and we ended up not coming back to Mulia Kidz after that. I felt that the staff should have tried to address the incident better and provide better supervision.

We enjoyed our stay at the Mulia. The resort was beautiful, and I loved the pools!
Food was also generally pretty good, although after a few days we did get a little bored with the options.

I do have several comments about the hotel that I felt they could improve on:

Tips if you are staying at the Mulia: