This is a continuation of our London & Paris trip. You can find the full trip itinerary here.

We pre-booked an airport transfer for around 50 pounds from Heathrow to the Radisson Blu Mercer Street Hotel (which turned out to be a great price, cheaper than taxi!) and arrived around noon. There were a ton of Radisson Blu hotels around London. I chose this one because of the location, right in Covent Garden which turned out to be a great base spot while we were in London.


The hotel itself doesn't have a "grand" lobby, as it is situated in a pretty central area where the buildings were older and not that big. Check-in was easy enough and supposedly we were upgraded to a larger room.


Our room was in the corner, so maybe we did get an upgrade.  It did look a little bigger than the regular rooms on the website.  It still wasn't that huge but considering we were in a pretty central location, it made sense why the rooms were smaller in general.


There's a separate seating area, and bottled water was included free of charge and replenished daily and/or during turn down service, which was very nice. 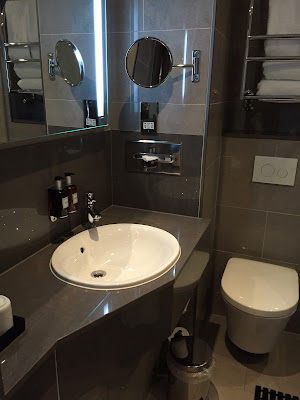 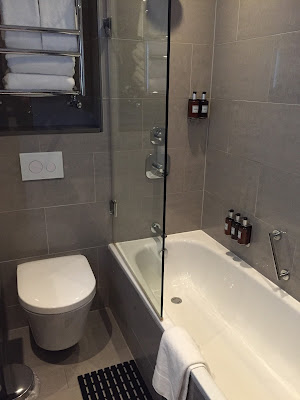 The bathroom was a little on the small side -- one interesting thing was the soap, shampoo, and conditioner, were in refillable containers, which I guess is somewhat more eco-friendly rather than the typical travel size disposable containers. :)

As I mentioned, this hotel was truly in a great location. It's within a few blocks away from the Covent Garden tube station (although at the time of our stay, this station was closed for renovation) and the Leicester Square tube station was not that far away. There's plenty of shops/restaurants/small markets within walking distance, as well as the actual "Covent Garden" and theatre district. The hotel was also not too far away from Soho, Chinatown, and Piccadilly Square. All in all, I felt that this hotel was very centrally located and a good base for exploring London.

The hotel itself was nice -- not luxurious or anything like that, but clean enough and overall a good value. Did I mention that the location was great? :)
Posted by Marcela at 9:40 PM