We flew to Punta Mita via Alaska Airlines. Even in economy, I felt that the leg room was pretty good. We ordered some in-flight food--chicken banh mi sandwich and the cheese plate--and the sandwich was probably the most delicious paid economy in-flight food we've had! It was warm and so delish! The sandwich cost $7, and we thought it was pretty fair definitely worth it for airplane food.

M did pretty well on the flight; she played with her new sticker book and was also on the iPad a lot. :) She also took her afternoon nap during the 3.5 hour flight.

We pre-booked transportation from the airport to the St. Regis which cost 1700 pesos (around $120 USD) one way. I figured it was a safe option, so we didn't have to deal with looking for taxi when we arrived. It was definitely a great option as they were waiting for us, had an umbrella ready (it was raining), and even allowed us to make a stop at Walmart to buy water and snacks. The driver was also very professional, dressed in uniform, and spoke good English. I definitely highly recommend considering this option.

I also requested a car seat for M which they had ready (although the quality seemed a bit questionable and also looked quite old :p), but it was still nice to at least have it included.

The drive took around 45 minutes. Punta Mita was actually located inside a gated community, they checked for our name before letting us in, so it did feel somewhat safe. The whole complex looked very manicured and upscale.

We arrived at the resort and were welcomed in the reception area. As is common in other St. Regis hotels, there was not a check-in desk. In this case we were welcomed with a cold hand towel to cool down and a drink choice of either iced tea or margarita.  The host directed us and provided our stay information in the open air lobby/seating area. Afterwards we were whisked to our room via a golf cart.


The welcome area/lobby was beautiful with views of the ocean. We really felt like we were on vacation as soon as we arrived!

Our building was next to the kids swimming pool, and not too far from the lobby, which was nice. The room was a good size; to me it felt almost like a suite. There's a small foyer area as soon as we walked in.


To the right was the bedroom area with small desk and TV, as well as a lanai with garden view and a peekaboo ocean view. 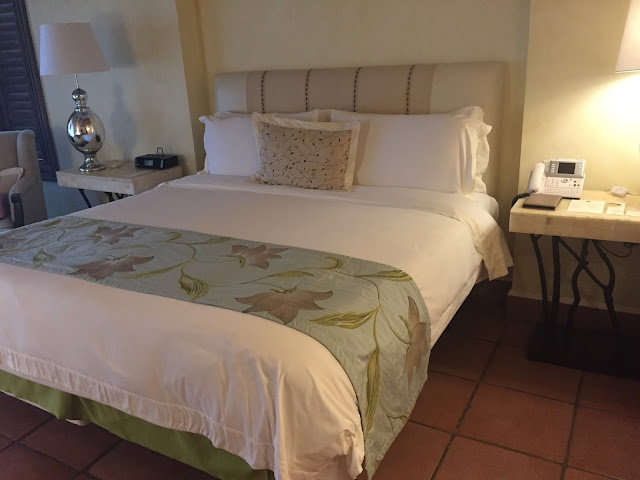 To the left of the foyer was the huge bathroom with dual sinks, a bathtub and indoor + outdoor shower areas.


The room was in good condition and did not look worn down.  The resort is still somewhat new. (I think 7-8 years old?)

We got a welcome voicemail message from our butler but didn't really use much of his services during our stay. I almost considered calling them for the complimentary tea service and free garment pressing, but ended up not doing it.


We really loved the room, and it felt bigger than just a room, more like a mini-suite or bungalow.

There were several pools around the property. We went to the family pool which was right by the beach. They had some floaties for the kids available in the pool, which was nice. The pool was a good size, but there was hardly any shade. We came in September which was one of the hottest months, so it was too bad that there's not much shade around the pool. 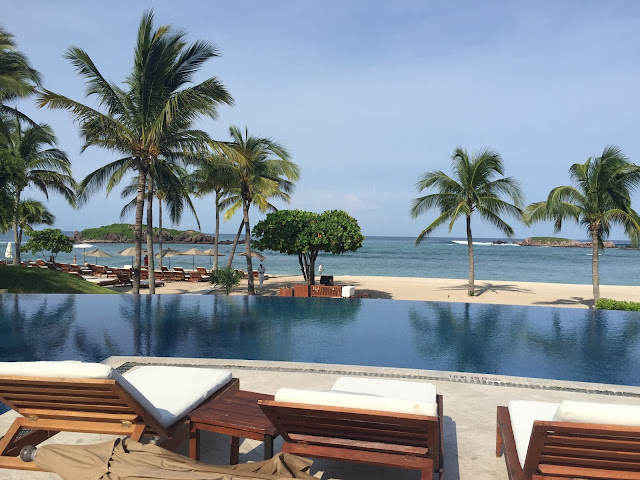 Right by the pool, there's a kiddy fountain play area which M loved! They also had sand toys available, and she had a blast. 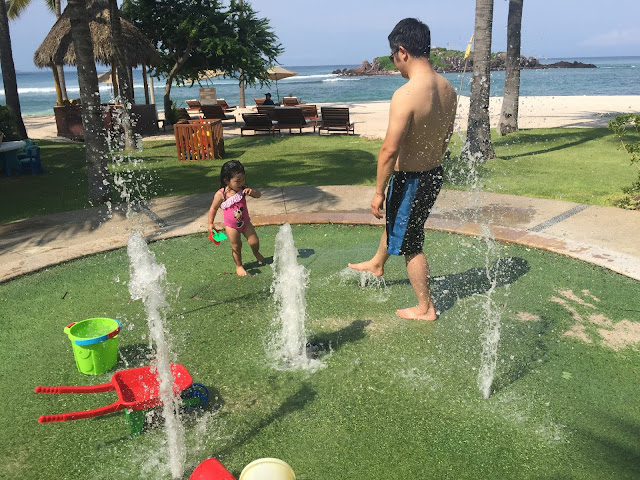 Nearby they also had a small kids table setup for morning activities. M did water painting on ceramics, and she really enjoyed it. I really felt that the resort really tried to cater to kids and families, which was great for us.

Another one of M's favorite was the Kids Club. It was actually located on the other end of the resort, near the spa and gym area. The kids club was actually a bit run down, which was a bit surprising for the St. Regis. There were not that many toys, and even the ones that were available looked very used and old. Nevertheless, M still had a blast. She got introduced to play doh and she loved it so much. When it was time to return to our room she didn't want to go, the attendant allowed us to take one play doh to the room, which was a nice gesture.

For our first night, it was raining really hard so we ended up ordering room service. We shared a pasta dish and chicken nachos. They were both pretty good.

We added the breakfast package for our stay (I emailed the concierge in advance).  The cost was $20 USD per person plus taxes and service charge. I highly recommend this option as breakfast would have cost double that if not already included in the room rate. The breakfast buffet was at Sea Breeze restaurant, which had indoor and outdoor seating. We always sat inside (air conditioned) to keep cool.

One thing to note: Breakfast was actually served until noon. So we could have had a later breakfast, skipped lunch, and gone for early dinner (but we didn't).

Carolina was the fine dining option and apparently very popular; reservations are recommended. We didn't end up eating here since we had our toddler-aged child with us and wanted something more casual. I had heard great things about this, so I would recommend checking out.  :)

Mita Mary was their restaurant on a boat by the beach. It looked really cool but because it was so hot, and the fact that they only had bar seating, we did not eat here either.

Sea Breeze was the main restaurant where breakfast and lunch were served. We had lunch here once, as it was the only option with air conditioning!! All other options were either by the pool or beach with no AC!  :)

Transportation to other places

The St. Regis had onsite "taxi" service available 24/7. When I say taxi, I mean luxury SUV.  :) We took this to grab dinner in town one day, and also to transfer to the Four Seasons resort after a few nights. One thing to note at the St. Regis, the taxi service was run independently, so we had to pay either cash or credit card directly to the driver.

We had a really wonderful stay at the St. Regis. Service was generally pretty good, and everyone was very helpful.  Our room was huge and gorgeous, and I had never been to a place where kids were so welcome and catered to.  It was fantastic overall!

A couple other notes from our stay:
Overall, we loved this resort and would highly recommend it to others.
Posted by Marcela at 10:44 PM