After two wonderful nights at the St. Regis, it was time to move to the next property, the Four Seasons Punta Mita. We were both very excited, as we had never stayed at a Four Seasons before and had heard a lot of wonderful things about their personalized service.

We took a taxi to the Four Seasons, which was located inside the same gated community.  It was maybe a 5-7 minute drive from the St. Regis.

My first impression was that the property was noticeably older than the St. Regis. The lobby area felt more like a typical hotel lobby.


We were welcomed by name with a cold towel and then escorted to sit down in the seating area. We were given a juice welcome drink, and M also got one in a plastic cup. They also welcomed M by her name (they had asked for names when we made our reservations).  It was a really nice personalized touch.

Similar to the St. Regis, they transported us to our room in a golf cart. Our driver/host was very nice, and throughout our stay he always addressed us by our name every time he saw us. He mentioned that we could call for a ride 24/7, and so we actually did quite often. The hot and humid weather was a little too much sometimes, and the property was actually quite big. Our room was in the Iguana building, which was a bit further away from the lobby and restaurants, so getting rides on the golf cart was pretty helpful.


The Iguana building was located next to the Kids Club and the entrance to the lazy river, which was super convenient. However, as I mentioned, it was a bit further away from the main lobby. But we did like the fact that it was very close to activities for kids.


One thing to note was that each building had its own laundry room--washer & dryer machines with detergent.  We took advantage of that to do two small loads of laundry.

The room was a good size, but coming from the St. Regis, it did feel smaller. It's basically a regular hotel room size, whereas the St. Regis was definitely larger.

We also noticed that the bed was smaller than at the St. Regis. The decor was a little bit older, but everything was in good condition and clean.

The hotel provided a very nice welcome gift for M, which included both regular and swim diapers, wipes, baby bath set, turtle stuffed animal, and foam letters that spelled M's name. She also got a welcome snack basket--chocolate milk, cookies, and jellies which she loved. 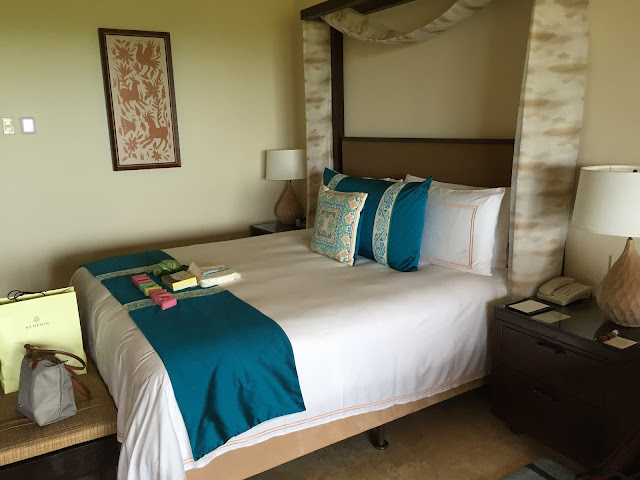 The grounds around the property were very lush, as you can see in the view from our balcony. Our room was the garden view, the entry room category. We did have a small peekaboo ocean view. We didn't use the balcony much though as it was so hot out.

The bathroom area also looked a bit dated, but also in good condition and clean. There's a shower area, a tub, and dual sinks. The bathroom amenities were L'occitane brand which was nice, and they even provided after sun healing balm.

Breakfast was included in our Travelzoo package (which would otherwise cost around $100 for 2 people). Breakfast was at Ketsi restaurant, the open air restaurant near the lobby. The view from the restaurant was nice, although we typically did not sit near the edges because there were a few birds who were pretty aggressive. Even for breakfast, I saw on a couple occasions the birds eat off the buffet table!

The breakfast spread was pretty good. There's the typical egg station, pancake/waffle/french toast, bacon/sausage, cereal, fruits, pastries, etc. The one unique thing that the Four Seasons had was a fresh juice and smoothie bar. I always got the smoothie of the day which was always delicious. My favorite was the banana/peanut butter/soy milk smoothie!


Service at Ketsi was typically pretty good. They were very accommodating of M. In addition to bringing a high chair, they always provided her with a set of Hello Kitty utensils, a bib (which she never wanted to wear), and a sippy cup with milk.

They had a pretty good selection for kids meals that we usually took advantage for M. One thing to note at the Four Seasons, kids under 5 eat for free. We didn't know at first but soon were explained this wonderful benefit by one of the servers.

For our first night's dinner, we went to Bahia, located by the beach at the Four Seasons. The food was mostly grilled. We ordered the skirt steak and grilled octopus, and both were wonderful! The skirt steak was very tender, as was the octopus!

Again, M's food was completely comped, which was nice!

I believe that dinner for us cost roughly $70 USD.

Another onsite restaurant was Aramara, but it was closed during the nights we stayed there.

The Kids Club at the Four Seasons was definitely much better than the one at St. Regis. It was more adequately staffed, and the toys seemed to be in much better condition. They also had planned activities for older kids. Since M was still young, one of us stayed with her whenever we went.

They also had an option to hire a baby sitter if you wanted to. I believe they cost $17/hour with a 2-hour minimum. During my stay there I saw a couple kids with the baby sitters, so the parents could enjoy some adult time.


We could also order food for the children that would then be charged as room service. I ordered lunch for M one time, and again it was comped!

One of our most favorite part of the Four Seasons Punta Mita was definitely the lazy river! They had inner tubes and noodles available to float on which was nice. This pool was sooo relaxing and unique. Dan and I would take turns watching M while the other floating around for a lap and then switch off :)

Service at the pool was generally pretty good. They always brought a small cooler with iced water bottles (free), and we could always order food in addition.


The main family pool was located near Ketsi, and was just breathtaking. See the picture below that I took on my iPhone!


There's also a separate adult only pool which was very private and quiet, but I didn't think it was as nice because there weren't any ocean views, and it's not by the beach. 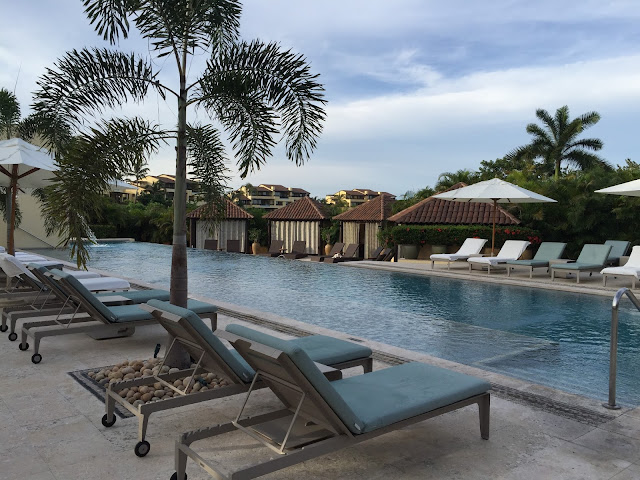 One standard item at each pool was the "sunblock" station where they had multiple types of sunblock to choose from! I also noticed that the restrooms were air conditioned, which was really nice as the temperature was just too hot otherwise. 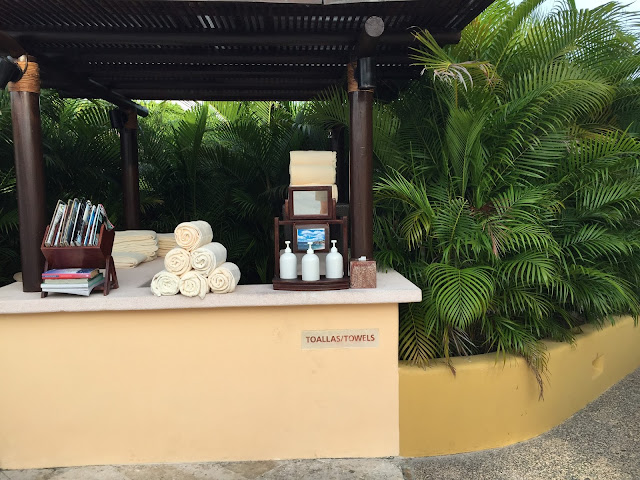 Every few hours, the staff would bring free little "treats" around. I think we got small smoothies, fruit, and other cold drinks.

We planned on spending a day at the on-site beach, but ended up only staying maybe 20 minutes. It was just too hot!! We ended up going back to the pool to cool off. :)

M had a great time though. They had free sand toys for kids to use so she had a blast. 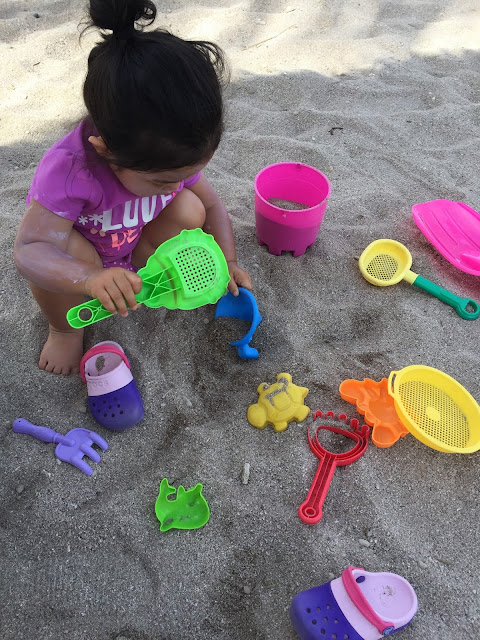 We were glad to finally try a Four Seasons resort after hearing so much about it. Service in general was a little better/more personalized than the St. Regis.