This trip was booked somewhat last minute, and we didn't do a lot of research ahead of time. I usually find myself to over plan our trips, so this time I wanted to try a different approach of very little planning. I did get some recommendations from friends and did look at Yelp beforehand to get some ideas of where to eat.

As far as activities, there's actually tons of outdoor things to do in Kauai such as zip lining, paddle board, hiking, snorkeling, etc. We really wanted to try paddle boarding but when we went in the winter, the waves looked pretty rough and so we decided to nix the idea. In the end, we ended up doing almost nothing besides relaxing by the pool, which was not bad, but totally different from our usual jam-packed travel style. :) I think the only "activity" we did was Waimea Canyon.

Here's a summary of some of the food places we tried and the few activities we did.

Our first stop after we landed at the airport was the Shrimp Station in Kapaa. Kapaa is the largest town in Kauai and a lot of restaurants. We were thinking that this place would be similar to Giovanni's in Oahu or Geste's in Maui, which are shrimp trucks, but this place was actually a sit down restaurant. 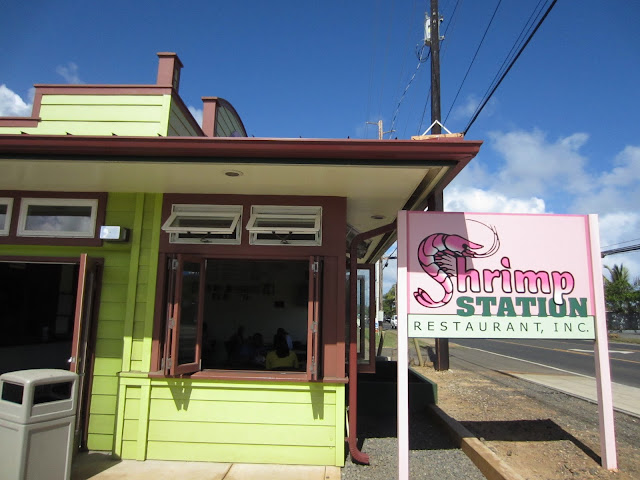 The prices were a bit more expensive, but I guess things in Kauai in general are pretty expensive. :) 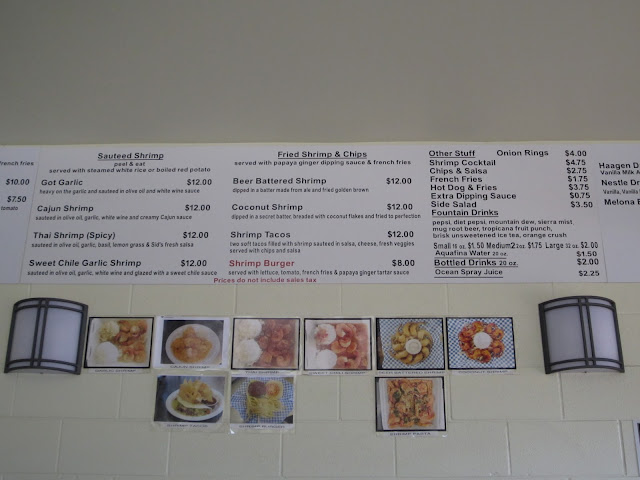 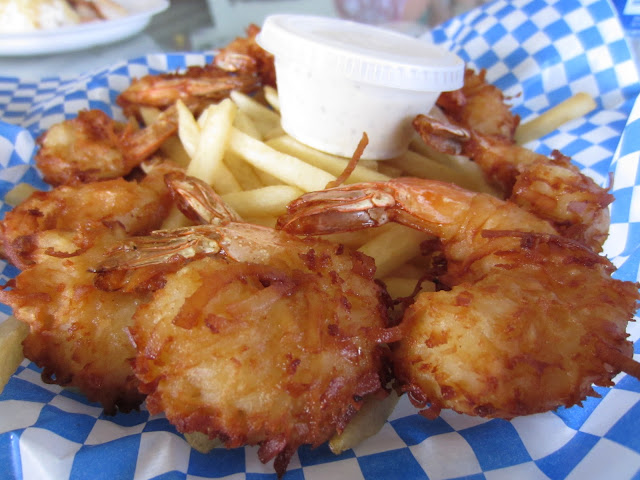 We also got the garlic shrimp, which surprisingly was very creamy in a white wine sauce and not as garlicky as what we would expect. 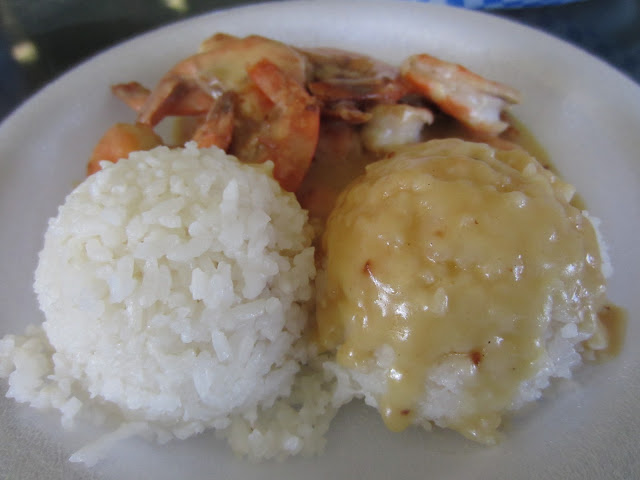 Overall it was pretty good, although we still liked Geste's the best and Giovanni compared to this place.

For dinner, we didn't want to drive all the way up to Kapaa where most of the restaurants were and wanted to find something near the Sheraton in Koloa. We booked dinner at Josselin's and I thought it would be nice to have a "lighter" meal since this restaurant serves tapas style food. The restaurant was located at the shopping center pretty close to the Sheraton.

They are famous for their duck tacos with pineapple salsa which we ordered and really enjoyed. The taco shell was actually fried wonton, so it was definitely unique.


We ordered a couple other things: pumpkin ravioli, short ribs steamed bun, and the braised pork belly--unfortunately they were all very mediocre and not that memorable. :(  Overall I am not sure if I would recommend this place. It was not bad, but we were just not that impressed. Prices were also on the higher side. One thing that was memorable about this place was they had a sangria cart with different flavors such as lychee sangria.

One of the things recommended for tourists visiting Kauai is the drive to Waimea Canyon. I think it took around .5 hours one way from our hotel to reach the Waimea peak. There were a couple lookouts on the way, with our favorite being the Waimea Canyon Lookout. 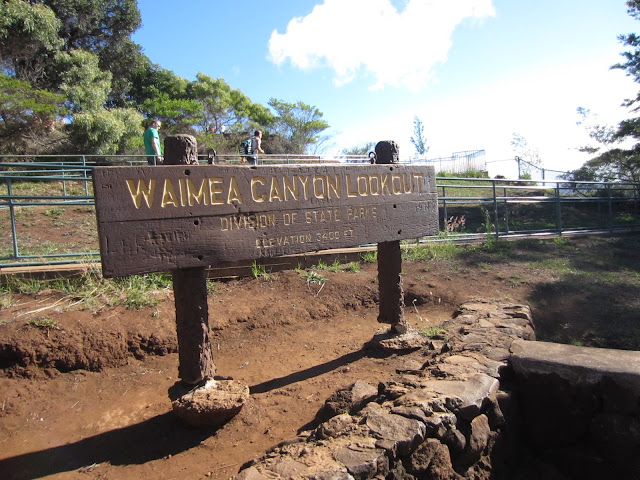 I've seen many many pictures of the canyon, and it was funny when I saw it in person, it felt "smaller". :) It was still really, really nice though. 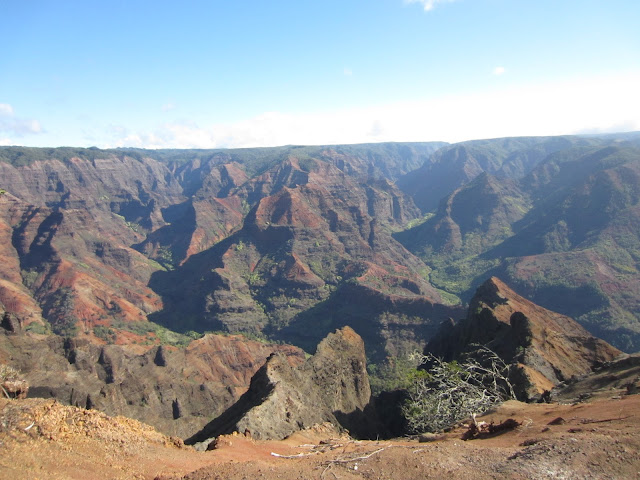 We went to another lookout where we could see the side profile of Napali coast and the ocean. 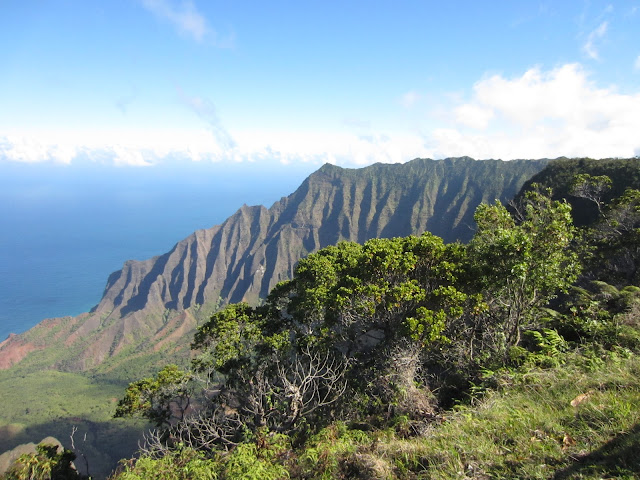 There's also lots of hiking trails around if you choose to do some hiking.

After the canyon, we stopped by a shave ice place. The reviews of this place on Yelp were pretty good, and apparently there's 2 Jo-jo's and this one was the good one! 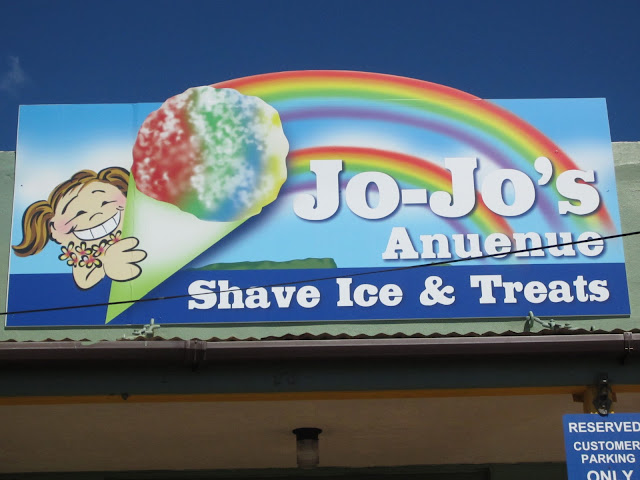 We ordered shave ice with the extra macadamia nut ice cream in the bottom (you must get that option!). The ice was pretty smooth and we give this place a pretty high mark. Ululani Shave Ice in Maui is still our all time favorite but this place was actually pretty good. 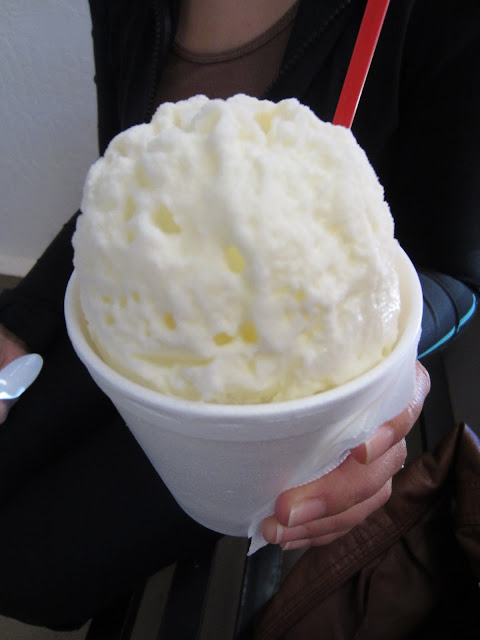 On the drive back from Waimea, we stopped by Kauai Coffee Company. 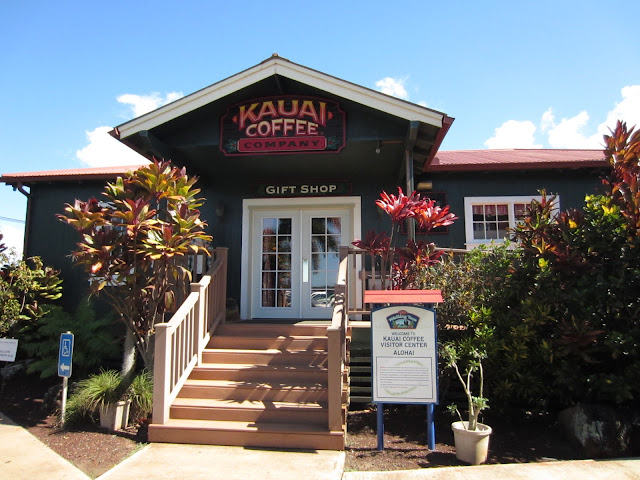 They have a visitor center that sells gifts, coffee, and snacks. There's also a sitting area with a recorded video showing how coffee is processed. They also provided free self-serve coffee samples at the visitor center. 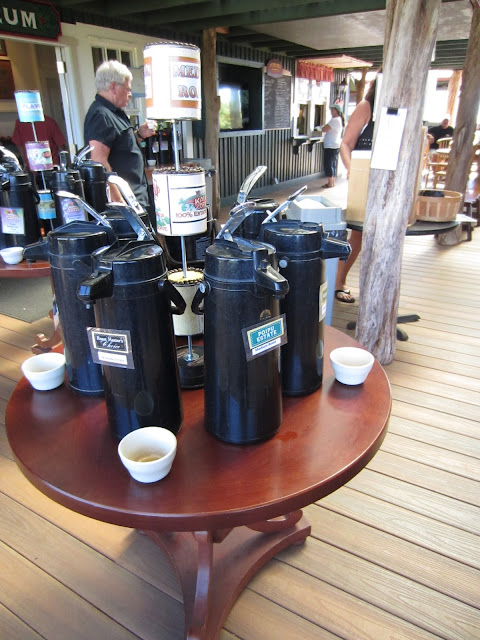 There's a small museum at the back which was free of charge where they show some coffee processing equipment. 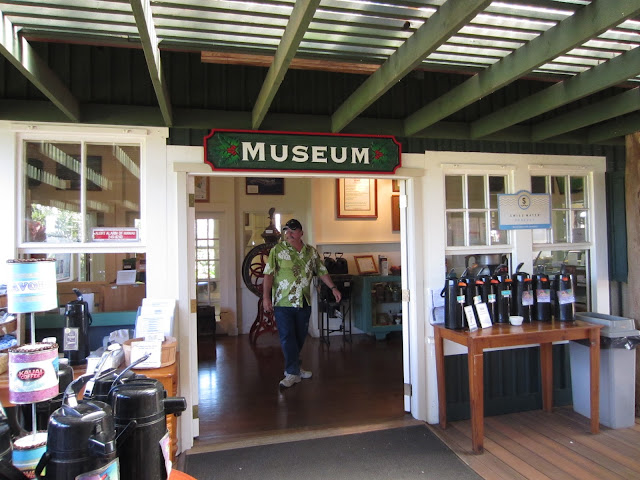 There's a trail that you can follow which they call the world's largest wall-less coffee maze, but it was just way too hot for us so we decided to forgo the trail. 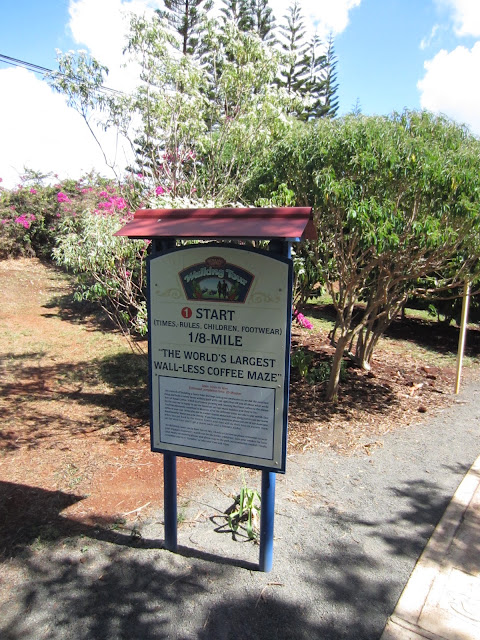 That's the name of the place, and we're not saying that this place was the best. :p I think we both preferred Jo-Jo's better, but this place was really close from our hotel in Princeville, so we decided to give it a try. 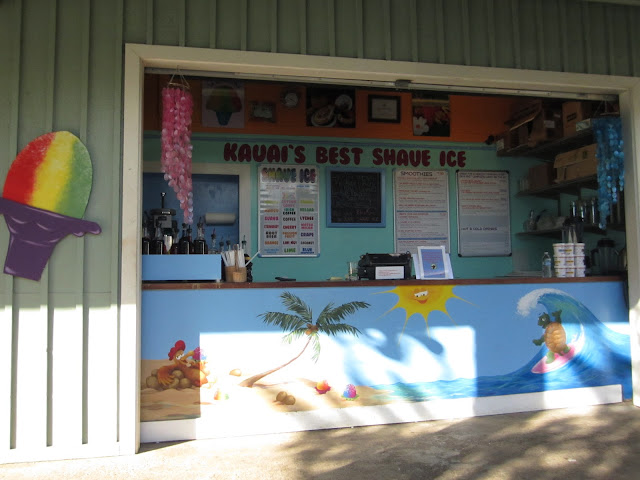 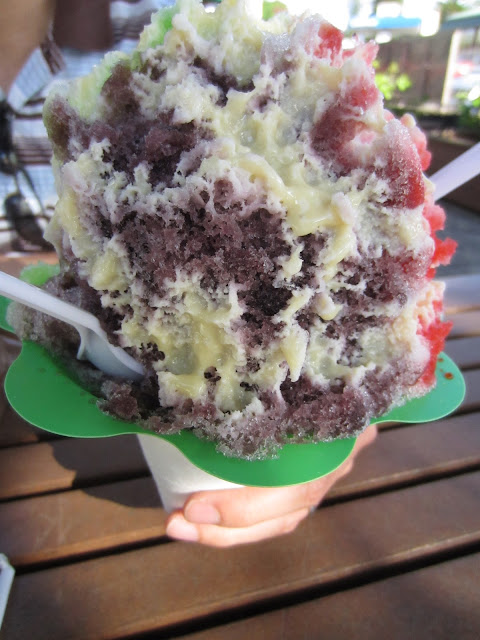 I read reviews of this place on Yelp and had really high expectations. I LOVE mochi (which is like a sticky rice cake) and heard about the Kauai Mac Nut taro mochi cake and I had imagined in my mind that this would taste really good. Unfortunately, it really disappointed me. I had a bite and regretted buying the whole cake. Dan ended up eating most of it. 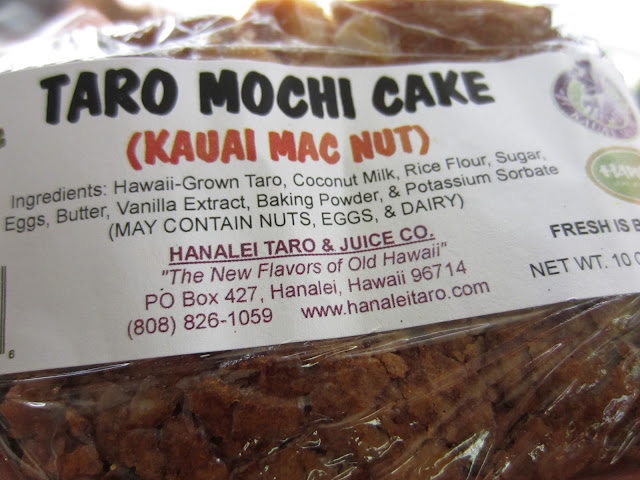 We also tried a taro smoothie juice with strawberries and pineapple. It was not bad and was a bit thicker because of the taro. 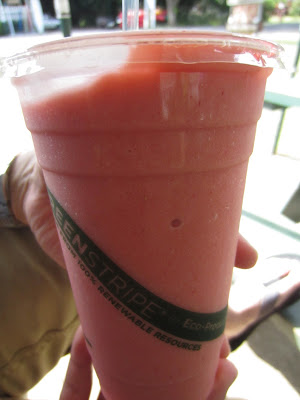 Saimin is a traditional Hawaiian "ramen", and this place is very famous for its Saimin. This was our last stop before we drove back to the airport since it's located close by the airport. 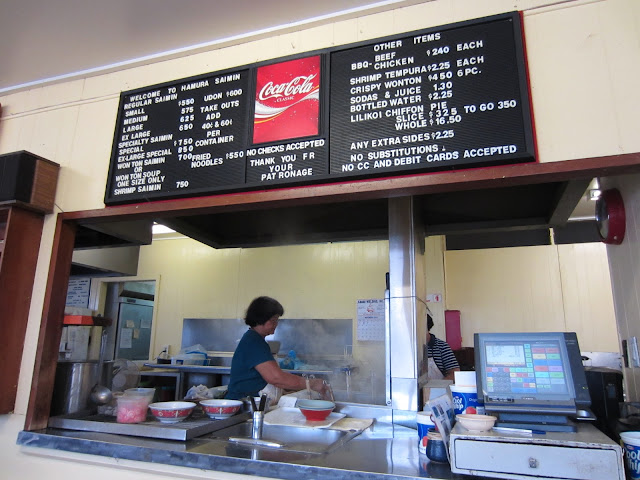 The restaurant was very small and low key, and we sat on stools and could see the busy kitchen in action.


We both ordered the specialty saimin which comes with veggies, hard boiled egg, roast pork, won ton, fish cake, and chopped ham. The broth was a seafood broth. The saimin was decent, but I think I had higher expectations for it. First of all, it was not the most pleasant experience eating hot food in hot tropical weather. :p But I guess I'm comparing this to ramen in the Bay Area which is different... so maybe it's an unfair comparison. 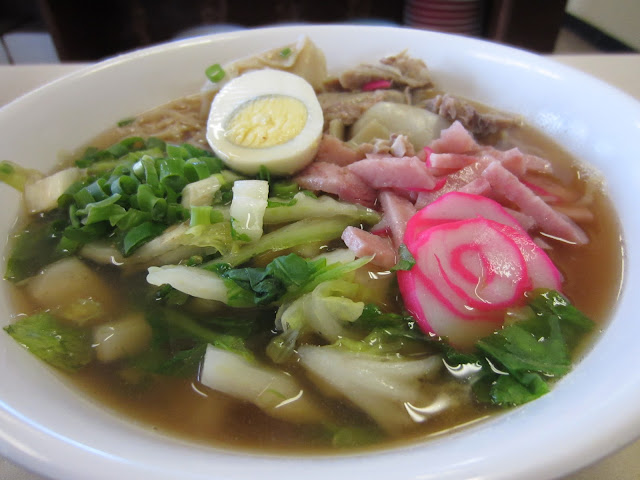 Overall we were both disappointed with the food in Kauai. There's not very many restaurant options, and the ones that were rated very highly on Yelp (4+ stars), I probably would rate 2-3 stars. There are definitely much better options in Oahu and Maui. Kauai is a smaller island and therefore there aren't that many options which is understandable. However, the two things that are always good in Hawaii are shave ice and spam musubi. :)

As far as activities, you can be as active as you want or do close to nothing which was our approach this time around. It probably would have been nice to do at least 1-2 activities while we were there, but for one reason or another we ended up not doing much this time around.