I found it interesting that Alaskan Airlines was actually one of the bigger airline operators from the West Coast to Hawaii. You would think that Alaskan Airlines only fly to Alaska...hehe. They actually had really great options and offered many direct flights from the Bay Area. We love flying from SJC since it's super convenient for us, so we found dates that worked for a direct flight from SJC to LIH.

Check in was easy. There was a separate line for first class, and there was no wait. There was also a separate security line upstairs for first class/premier travelers, which was nice. I started my trip off buying coconut water from one of the convenience stores in the SJC terminal. I thought it would be a good way to get in the island mood. :)

Apparently the flight that day was full, which made sense since it was the Friday before Veterans Day, so there were probably a lot of people who wants to take advantage of the long weekend. We boarded early and I quickly took a shot of the first class cabin before everyone boarded. 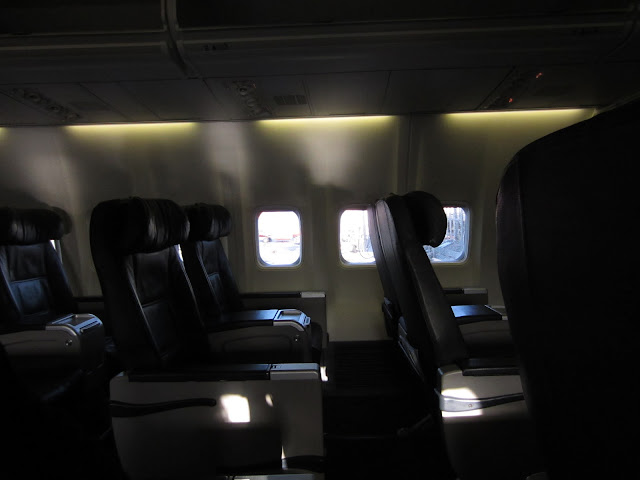 The first class cabin was pretty spacious for a domestic airline. The seating configuration was 2-2 and there were 4 rows in total. Dan read from Seat Guru that the first row actually had a little less legroom, so he booked us in the second row. 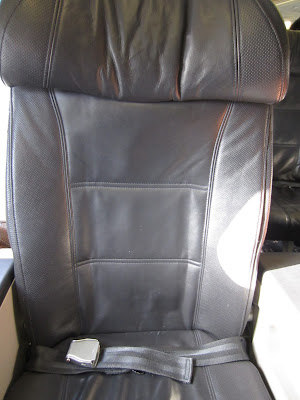 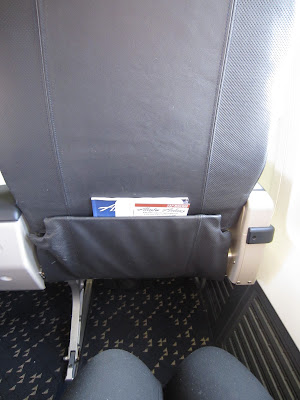 We were offered drinks shortly after taking our seats. I went with their specialty drink: POG (Passionfruit, Orange, Guava), and Dan got the POG Mimosa.

They also distributed an "Island Snack Mix" which consisted of dried sweet pineapples, roasted sesame crackers, and macadamia nuts. I thought the snack mix was pretty good, definitely a nice change from the typical peanuts/crackers.

Since this was a morning flight, the meal service was breakfast. And I actually prefer breakfast food on airplanes. I feel like it's probably the hardest to mess up, and typically they are pretty good. The menu looked quite promising. The flight attendant announced that they only had 8 of each meal, just enough for everyone, so really if you can get forward seats you're better off in terms of getting your first meal choice. 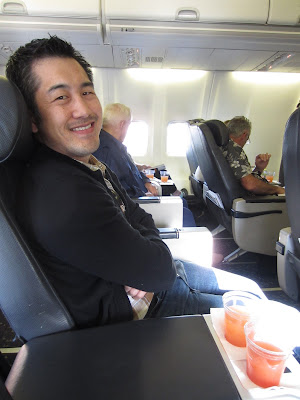 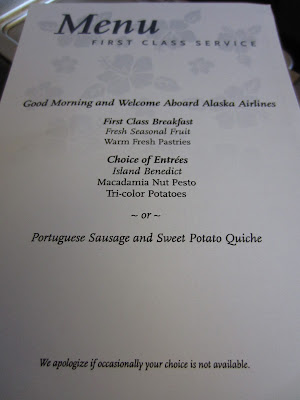 We decided to order one of each, Dan got the Island Benedict and I got the Quiche. The breakfast also included fruit platter. 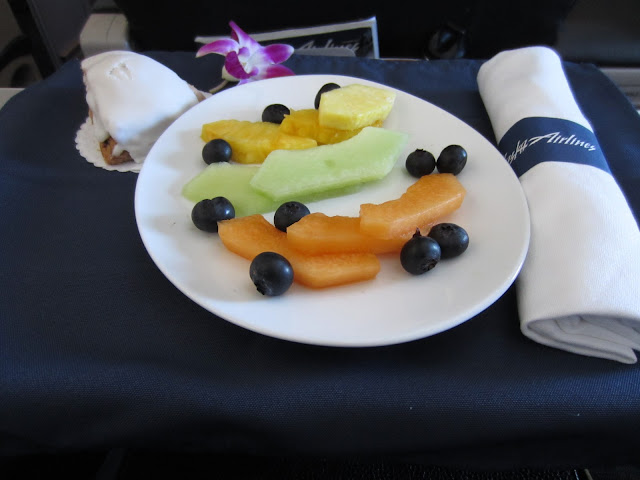 The Island Benedict was definitely very unique, a bit different from a regular eggs benedict with hollandaise sauce. The egg was scrambled and the sauce was macadamia nut pesto, served with tri-colored potatoes. I actually enjoyed it even though it's not your typical benedict. 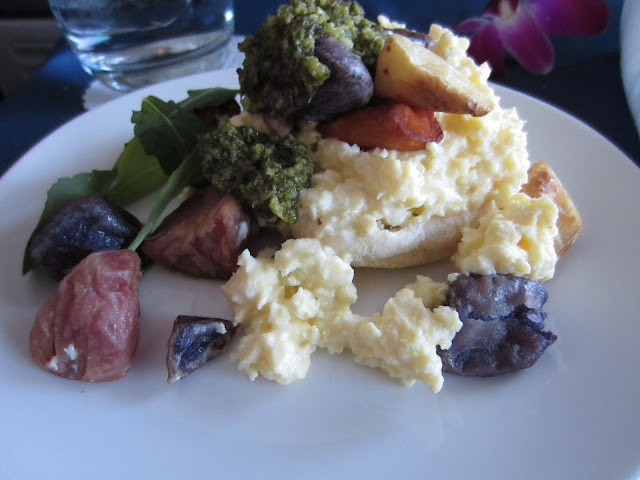 The quiche was also quite tasty, even though the crust was all broken, haha, but still tasted pretty good. There were pieces of Portugese sausage, and it was served with asparagus. 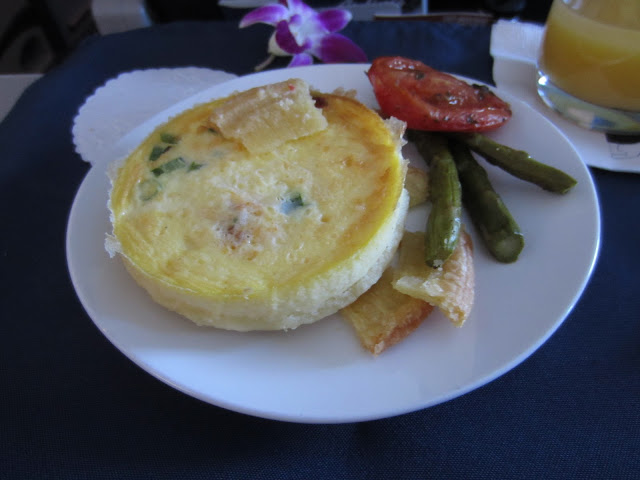 Overall, I thought both dishes were quite good, especially for airplane food.

During the 5+hour flight, the flight attended distributed a personal entertainment system. It actually had quite a good selection of movies. The only downside is that they gave us these cheap earphones (not the noise canceling one), so it was really hard to listen to the audio. 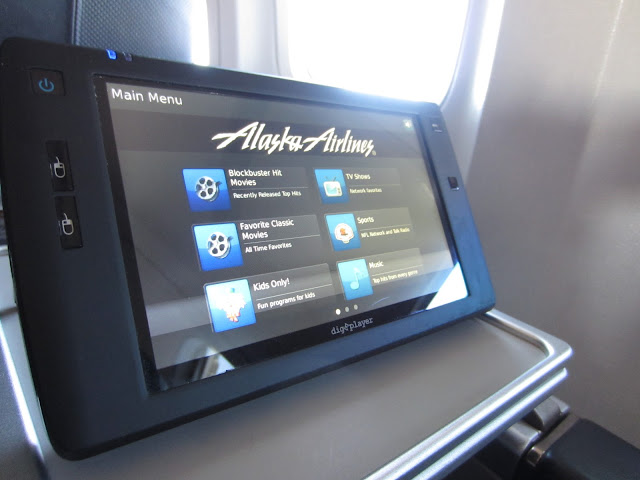 We both slept on and off during the flight, and finally landed in the beautiful island of Kauai! 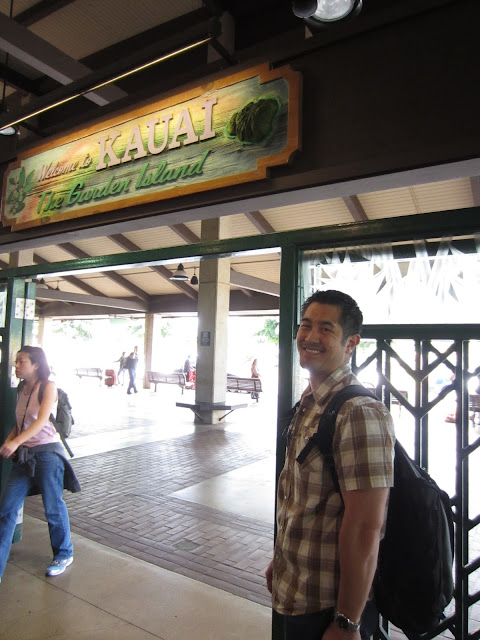 Next Post: Sheraton Kauai Resort
Posted by Marcela at 11:10 AM