I booked the Chichen Itza public tour for our third day. We haven't done a "public" tour in a while since the last few were private tours with our family. I forgot how painful and slow big bus tours were. First off, we were picked up very early from our hotel at 7:15 AM, only to be dropped off at a meeting point where we had to wait 45 minutes for other passengers from other hotels. Once the bus came, we boarded. The bus was completely full; thankfully we boarded early so we were able to sit together.


Our guide was named Ruben, and he was actually very funny, entertaining, and informative. The journey from Cancun to Chichen Itza took around 2.5 hours. Apparently the ruins were located in a different state from where Cancun was. On our way, we stopped by a cenote which is an underground cave with natural spring pool.


There are lots of cenotes in the area because the grounds are very phosphorous and do not hold water, so there were no streams of river or lakes in the area. All the water was found underground in these cenotes. The Mayans believe that the cenotes were where you communicate with the underworld. During this stop, we were allowed to swim but Dan and I both chose not to and just dipped our feet. Legend says whoever touches the water makes them 10 years younger!


After the cenote, we were taken to a small village with a huge souvenir shop for an obligatory stop. We didn't really want to buy anything so it felt long. Then we had buffet lunch at the restaurant in the village.

We then went to Chichen Itza and arrived in the afternoon. We were assigned a local guide named Jose who was excellent. His English was flawless I would have thought he was American. A couple of interesting tidbits about Chichen Itza: 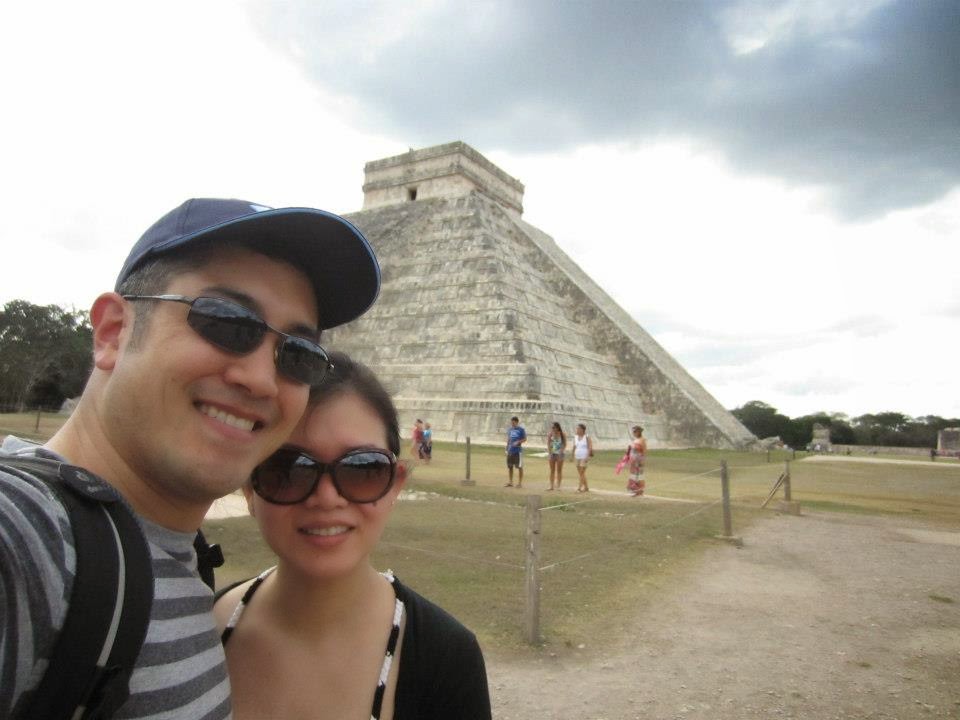 Overall we were glad we went, but make sure to wear good walking shoes since there's lots of walking involved. Also, if you can, try to either book a small group or private tour. The 40+ bus tour just didn't work for us. There's lots of waiting involved and mandatory stops we didn't care for.

Next Post: Cancun Day 4: Pool Time & the Superbowl
Posted by Marcela at 8:10 AM