We recently visited family over two weeks--one week in Jakarta and one week in Sydney & Melbourne.

We flew Cathay Pacific Airlines, this time in Economy, since we booked it somewhat last minute and were not able to find 3 seats in Business class. We knew it would be a long flight, but we also thought it would work out better in Economy as M could sleep and lie down in between us. And it would be easier to pass her back and forth.

At check-in, the agent acknowledged Dan's One World Emerald status and gave us access to the business class lounge. Unfortunately, it didn't come with an automatic upgrade as well. :p

The flight was loooong.... It took 14 hours, and M only slept partly. So we had to entertain her most of the way. Since she's older now, she's able to watch TV or iPad, which kept her occupied for a little while.

We had a short layover in Hong Kong (about 1 hour), which I thought would be enough time to relax at the lounge and shower. However, after I showered, we had to run directly to the gate as they had already started boarding! This was possibly the shortest and tightest connection ever. Thankfully we made our flight to Jakarta.

After we landed, Dan went through immigration, and he no longer needed to pay for a visa on-arrival because the purpose of the trip was personal, visiting family and not for business.

The main purpose of our trip was to visit family; my parents and my sister & her family live in Jakarta.

We mainly stayed in South Jakarta where they live. Our days were filled with trips to the mall, visiting my sister's condo, and meeting up with friends.

My sister's son is around M's age, cousin L. They had so much fun playing together -- cousins really do have a special bond, and it was really neat to see them play and grow together.

M had her second ever haircut! She almost cried, but thankfully her cousin sat next to her and they showed Barney on the TV. :) Aside from the haircut, M enjoyed the many choo choo train rides at the mall.

Here are some of restaurants we ate in Jakarta:

After one week in Jakarta, it was time to go to Sydney. We flew Qantas direct from Jakarta to Sydney (red-eye flight), and arrived early morning Sydney time. My sister and her husband picked us up after we landed, and took us to a famous breakfast place called The Grounds.

The Grounds is a pretty unique restaurant. There were stands for different foods, and there was a mini-zoo with live animals. M enjoyed having a look at the animals.

We stayed at my sister's house in the Darlinghurst area, which was pretty close to the city center. There's lots of cafes & restaurants around her neighborhood, which we ended up eating at frequently. I noticed there were lots of smaller, local restaurants, but the food quality was superb.

For lunch, we went to the Chiswick at the Gallery. The restaurant had a nice view of the water & city, and we noticed that everyone was very nicely dressed (which later turned out to be the norm in Sydney!). The restaurant is a farm-to-table concept, with bigger main dishes to share. The steak and the fish were amazing, and almost everything we ordered was very good. Food tasted fresh and perfectly cooked. We highly recommend this place. 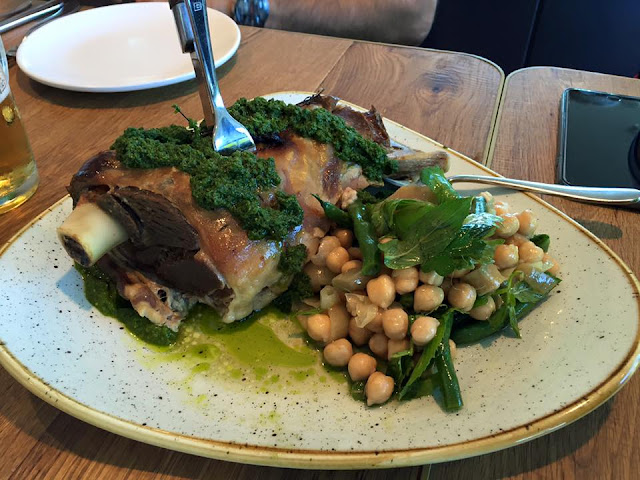 We went to the Sydney Fish Market on a Sunday. The Fish Market was actually pretty "clean." I imagined fish lying around everywhere, but they actually had a pretty nice building with lots of restaurants & markets inside. They also sold other food besides seafood (like fruits and juices!).

My favorite thing at the Sydney Fish Market was this "Japanese stall" that sold scallop aburi, which essentially was scallop on the shell with melted cheese over rice, grilled to order. There was a little bit of a line but it moved pretty quickly. I noticed that the people selling the scallops were actually Indonesian, as they were talking to each other in Indonesian! I almost said hi but I didn't. :)

Tables were all first come, first served, outside seating. We saw a lot of people ordering the chili crab, so my father asked my sister to order it for us. It turned out to be around $350 AUD! I was shocked, haha. We saw SO many people ordering, so we thought it must be somewhat affordable. I was thinking maybe $50-$60, but not $350! It's funny because almost every table ordered this dish! It was pretty good, but I think very overpriced. I still prefer the scallops. :) 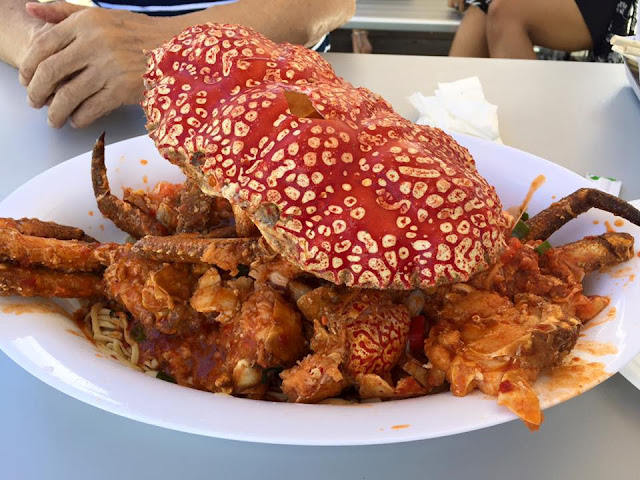 We also got some coconut water on the shell, which was so refreshing and delicious.

One afternoon, my sister rented a minivan and we drove to Bronte Beach. Originally we planned to go to the famous Bondi beach, but it was just too crowded.

The beach was beautiful, but also very crowded. The interesting part was that there's a public salt water swimming pool right next to the ocean.  Apparently this was pretty common in Sydney, which I thought was cool.

To get to Taronga Zoo, we rode a ferry boat from Circular Quay. It was a short ride (12 minutes), and the ride was beautiful--great views of the city, Opera House, and bridges. Once we got to the zoo area, we took the public bus up to the zoo entrance at the top of the hill. The zoo tickets were a bit pricey (I think around AUD$46 per person). The weather was a little warm at the time, but it wasn't too hot or humid like in Jakarta.

The zoo itself was actually quite hilly. There were some parts where it was uphill. We went straight to look for the kangaroos and koalas.

We first went to the kangaroo area. I was surprised that there wasn't actually a fence in between us and the kangaroos! I was worried that they might jump at us,  hehe...

M was so excited to see the koalas, so we took her to that section. (She said koala was sleeping).

The best part of the zoo (for me), was the giraffe area. From there, we had an amazing, beautiful view of the water & city skyline behind the giraffes, so unreal! 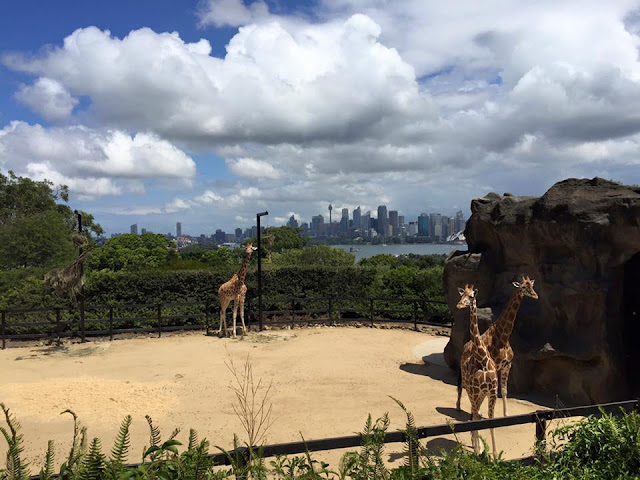 Overall we had a nice trip to the zoo, and would definitely recommend it (especially if you have kids)!

We had dinner at Bennelong, a fine dining restaurant inside the Sydney Opera House. We could tell the architecture was unique from inside the restaurant.

We were actually slightly underdressed, but we called in advance and they said we did not need to dine with formal attire.

Food was a bit on the expensive side, served fine dining style. Taste-wise, it was just okay, but we were really paying for the experience.

Another day, we spent around the downtown area, specifically at Westfield Sydney. There's a lot of shopping malls around, and some areas were no car zones, which was nice.

We met up with friends of ours who moved from the US and now lives in Sydney. It was good to catch up with them over lunch at Chat Thai (which served excellent Thai food!).

I was fairly impressed at the food selection on the 5th floor of the Westfield Sydney. They had Tim Ho Wan, Din Tai Fung, and Ippudo on the same floor! These are all highly coveted restaurants that usually have super long waits at other locations in the world. I was able to buy the famous pork bun at Tim Ho Wan Sydney for no wait! :) 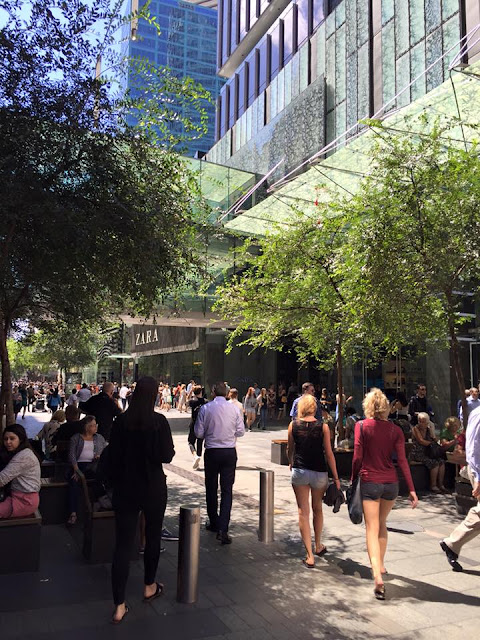 I read about the Wiggles museum in Sydney, and thought it would be nice to take M there since she enjoys Wiggles' songs. It turned out the place was called the Powerhouse Museum, and they had a Wiggles exhibit.

We took a taxi from the Westfield to the museum, which was not too far from downtown. The Wiggles area was not overly huge, but it was nice enough. There was the big red car that M thoroughly enjoyed and asked to ride over and over again. They also had a "fruit salad" section where kids could cut toy fruit and mix them in a bowl.

The one unique thing in Australia that we have not found in the US is Babyccino!
One day, my sister bought M a babyccino, and we had no idea what it is. We soon discovered almost all cafes in Australia serve frothed milk, served in a mini cup for kids. How genius! They were usually free or cost very little.

M LOVED sipping on her babyccino, and asked for it every time. :)

After Sydney, we went to visit Melbourne for 2 nights. Both my sisters previously lived and went to school in Melbourne. I had visited once before as well and remembered it as a beautiful city. We really didn't have much time in Melbourne, so we spent the majority of the time around the main city area.

My sister booked a 2 bedroom suite at the Olsen Hotel in South Yarra. The South Yarra area appeared upscale and very nice, but was quite a bit away from the city. The hotel itself was pretty nice with modern decor, although we had a small incident where housekeeping didn't clean our room very well. They ended up comping us free breakfast, which was appreciated. 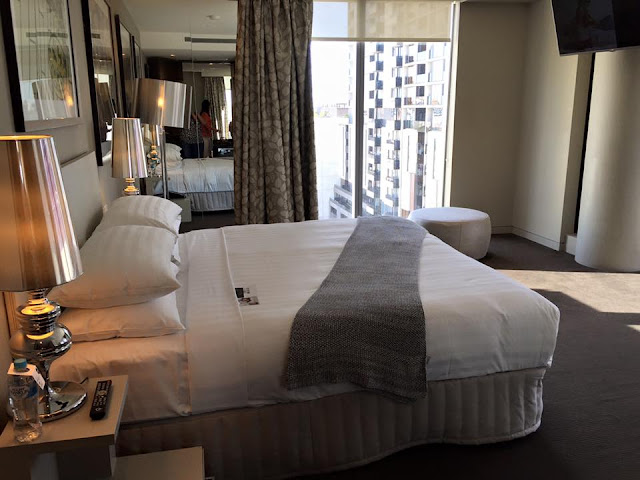 We went to the David Jones store, downstairs to the food hall area. It reminded me very much of Harrod's food hall in London. There's plenty of ready made food options. I tried some chicken katsu roll, which was actually pretty good. Their fruit selections were very good as well. 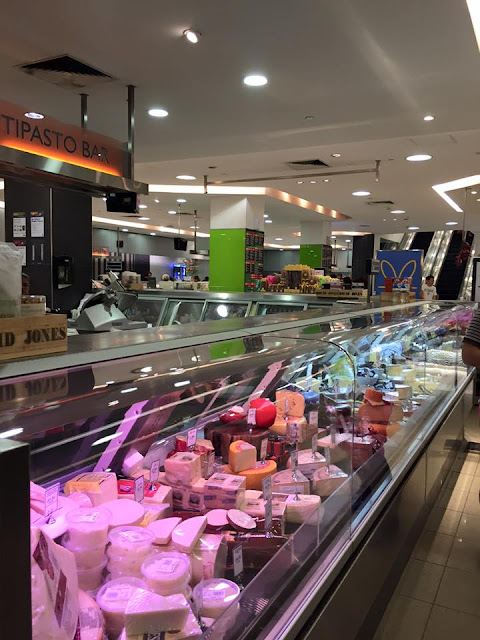 After the food hall, we went to Mekong Vietnamese restaurant, which is very famous in the city. I saw pictures of many famous people, including Bill Clinton who apparently had 2 bowls of soup here. :)


Travel back to SFO

This lounge was probably the nicest one we have ever been to. The area was very clean, bright, and spacious, with views of the runway & airplanes. There was a full service, sit down restaurant. Dan ordered a sandwich and chicken fingers for M. We also ordered ice cream for M's dessert.

I was also able to book a quick 20 minute spa appointment. They actually had a full spa with individual treatment rooms, which was pretty crazy! The treatment was really wonderful. I wish we could travel like this more often!

The flight itself was around 13-14 hours long, but the timing of it was perfect. The flight departed at 3 PM. M actually took a little nap early on, then woke up for a few hours, then slept the whole rest of the way back to SFO! So Dan and I actually got some rest and watched movies. I ended up watching 2 full seasons of the Silicon Valley TV show during this flight.


We really enjoyed our time in Indonesia and Australia. It was nice to be able to visit both places to break our trip up. We actually liked Australia more than we thought we would. It had the familiarity of the US (and the cleanliness), though it still felt like a different country with its own uniqueness. Australia was also very kid friendly!