Dan had a two-week work trip to Malta, and I decided to tag along for the second half of his trip. Dan's parents were kind enough to watch M for the week. The plan was for me to fly into Paris, where Dan would meet me to spend the weekend, and then fly together to Malta.

The majority of the lodging was covered by Dan's work. We only had to find hotels for 2 nights in Paris and 3 nights in Malta.

I had always wanted to stay at the W in Paris, and they had cash & points availability for 10,000 points + 180 USD per night. For Malta, we were deciding between the Westin or the Le Meridien, but went with the Westin, which costs 12,000 points per night.

I was able to find last minute airline availability using miles, which was great, because otherwise plane tickets would have been too expensive.

We stayed for 2 nights at the W Paris Opera. I really wanted to try this hotel and loved the location. It literally is across the street from Galleries Lafayette. The Metro station is not too far away, and it is actually in the same general area as our hotel last time, the Park Hyatt Vendome. 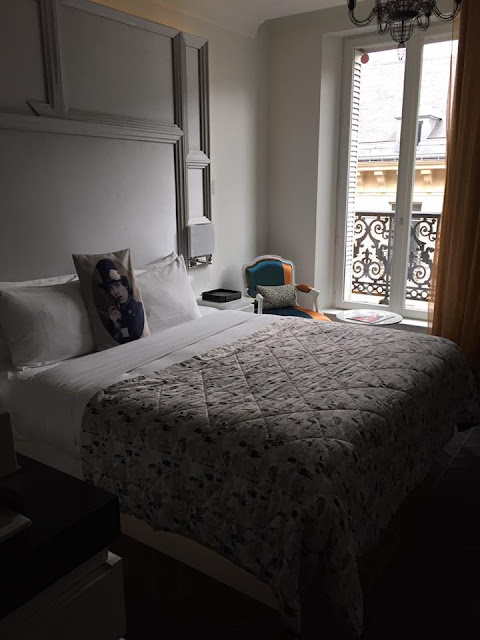 We booked transport from the airport using intershuttle, for 55 euro one way. The pick up was prompt, and the vehicle was clean and big. I'm glad we did this option as opposed to finding taxi at the airport.  It was so much more convenient and less hassle.

The check in area is really small and tight, and there isn't a lobby per se, but there is a seating area/cafe.

The room was a little tight and the shower setup was a little awkward. It made me feel like I was in a cruise ship shower. All the toiletries were the typical W toiletries, similar to the one in Bali. I wished the packaging was a little better, since at this price point, it looked a little cheap.
We didn't have breakfast included in the package, but it was close enough to Eric Kayser bakery where we grabbed some pastries.

I did a little bit of shopping in the morning, and then we went to Angelina for their famous hot chocolate. It's still as good as I remembered. :) 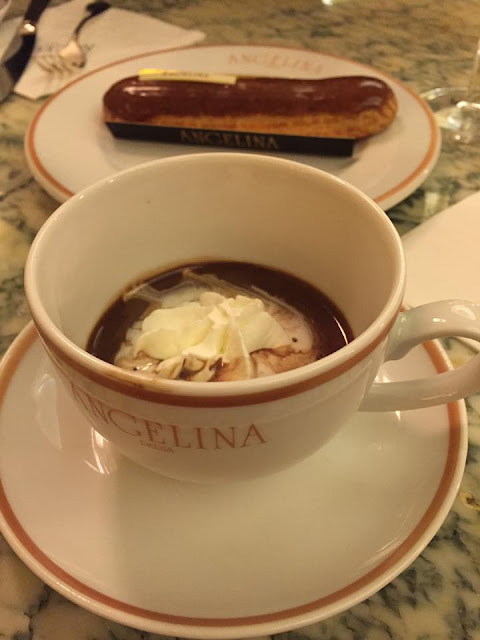 Dan got a praline eclair but he wasn't that impressed with it.

We then went to the storefront to get some gifts for M's preschool teacher.

We walked around this area and found the La Droguerie creperie which is supposed to be famous. There was a small line when we started, but it grew to be quite long! We got the jambon frommage and the Nutella banana almond crepes.

We both preferred the jambon frommage, which had a crispy cheese crust. 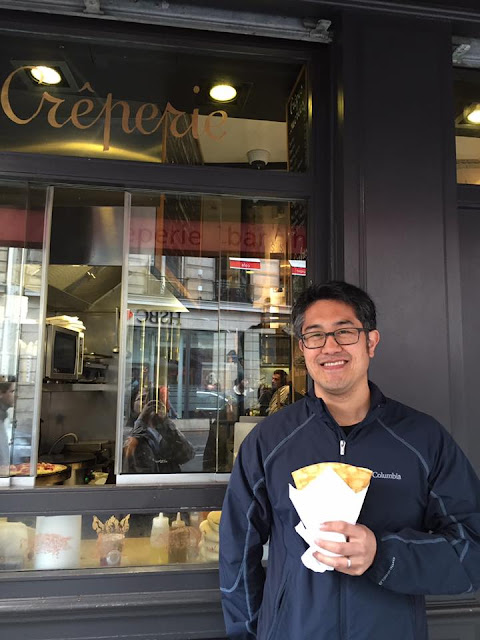 We wanted to check out L'as du falafel for their famous falafel, which happens to be on the same street, but they were closed for Passover.

Le relais de l'entrecote is a very famous restaurant in Paris that only has one thing on the menu: steak frites (steak & fries).  During our last trip to Paris, we didn't get a chance to try this restaurant. So this time we wanted to make sure we did.

We went for dinner around 8 PM, and there was already a small line outside. We waited for around 30 minutes to get seated. The restaurant was full and lively, with the servers being all women dressed in French maid outfits.

Since there is only one thing on the menu, they only ask how you would like your steak cooked. I chose medium, and Dan chose medium well.


The meal included a small salad with walnuts, which was pretty good. It was tossed in a creamy horseradish sauce.

The steak and fries came with a generous green sauce. Dan really enjoyed his steak. They also provided a second serving. After that, we were both really full. 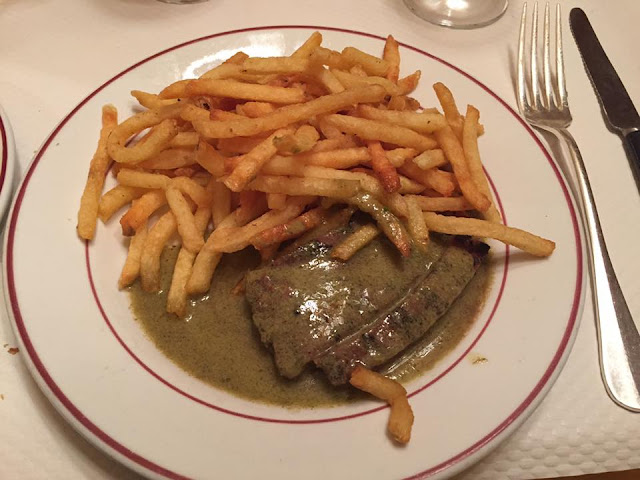 Afterwards we looked at the dessert menu, which surprisingly had a big selection! I thought it was funny that they had a full dessert menu but only 1 dinner menu!

Total for dinner (including a glass of wine) was 68. Each steak dish was around 21 euro, which we thought was pretty reasonable.

This is probably our most favorite restaurant in Paris. We actually went twice during this trip (and once last time).

This restaurant is more like a bar, standing room only, with awesome wine selection and great small dishes to share. There are pictures of each dish (the menu) hung from the ceiling, and almost everything we tried was delicious!

Our favorite dish here is the foie gras burger. It's cooked just perfect (almost raw actually), and with the foie gras the burger tasted so indulgent. 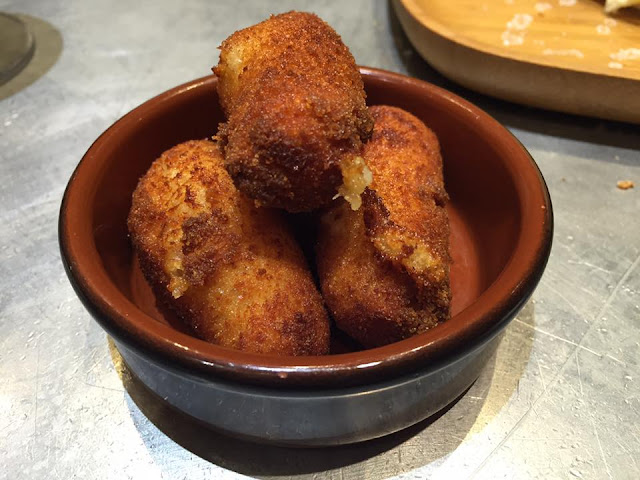 We also liked their ham croquette and fish croquette. The croquettes were so creamy on the inside and crispy on the outside!

We tried the artichoke, beef sandwich, croque Monsieur croissant, pork sandwich, and they were all fantastic.

The other star dish is the bread and the bordier butter on the side. They serve a huge blob of butter to be shared. It is massive!! And probably the best butter ever! 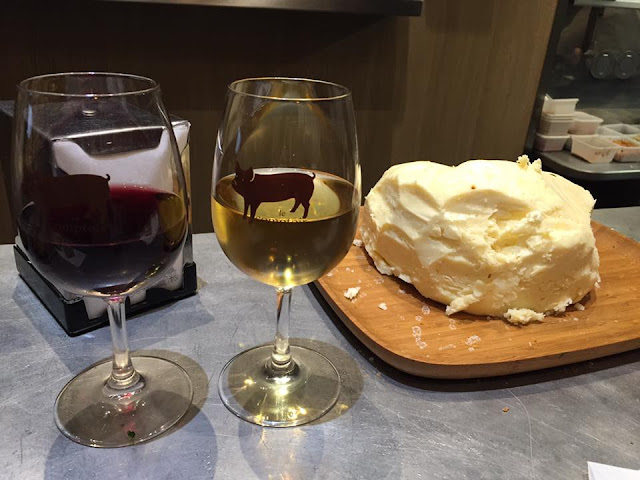 Outside of the restaurant, they also sell crepes to go which was also excellent!

Since we were not able to go to Musee D'Orsay last time, this time we really wanted to make sure to check it out. There was a huge line when we came, and we probably waited around 30 minutes to purchase tickets and enter.

The Museum is not as big as the Louvre and much less overwhelming. 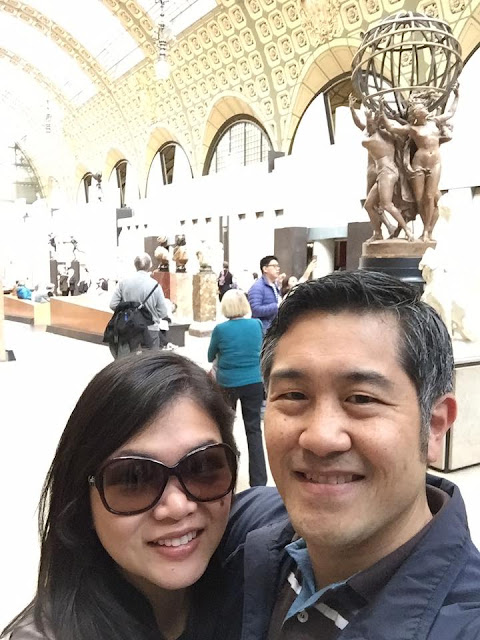 After 2 short nights in Paris, we flew to Malta. Dan had been there the full week prior for his first conference. We took Air Malta from Paris and went straight to our hotel.

For a few days while Dan was at his conference meetings, we stayed at the Intercontinental Hotel. The location was pretty good, close to the hustle and bustle, as well as the beach. There were some shady areas close to the hotel, but I just try to walk passed it. :)

The hotel was a little bit older and outdated, but I think the location was very convenient.

Once Dan finished his conference, we extended our stay for a few days at the Westin Malta. The Westin was actually not that far from the Intercontinental. The overall feel of the hotel was more like a "resort", and felt more upscale. The lobby was beautiful. We felt so "relaxed" as soon as we checked in. As a comparison, the Intercontinental felt more like a business hotel.

The room was also a little outdated, but we had a gorgeous view of the pool & ocean, and they upgraded us to a junior suite with Dan's SPG Gold status, which was nice. 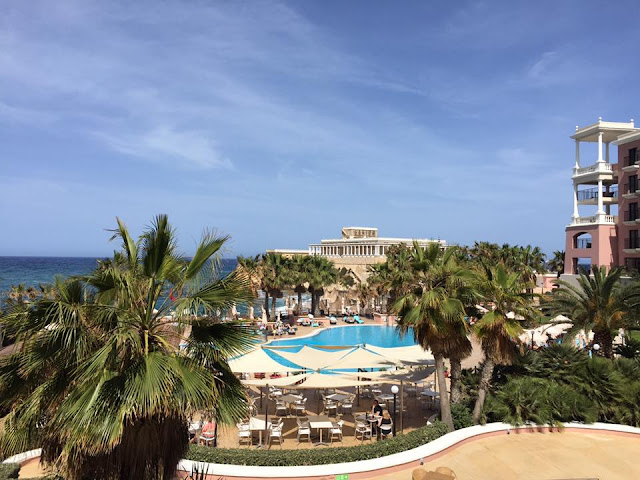 I wasn't really sure what to expect, but was excited to try something new. I was introduced to my therapist, who walked me into this big marble room that felt like a steam room (but very mild steam). She then took me to a separate area where there was a marble bed where asked me to lay down.

The first step was exfoliation using this rough cloth. She then put soapy foam all over my body, and then did a little massage & shampoo, and then rinsed with warm water. It was a very interesting experience, as it felt like I was getting bathed by someone, which is not something I'm used to.

Hop on hop off bus

Dan already did the Hop on and off bus tour during his first week in Malta, so I went by myself one afternoon.

I got picked up at the Paranga beach club, which was around a 5 minutes walk from the Intercontinental. The bus comes every 30 minutes, so I didn't have to wait too long for it. The whole end-to-end trip took around 4 hours! This was probably the longest hop on/off bus tour I'd ever been on. And that's not including getting off; this was 4 hours of just sitting.

There was a beach club a short walk away from the Intercontinental. The ambiance reminded me of Mykonos, as you are sitting by the beach and the restaurant was decked in all white.  I had dinner by myself since Dan was working, so that wasn't fun. :p

Shopping Mall in Front of the Intercontinental

While Dan was busy working, I went to the "mall" a few times to get some items. The mall was very, very small, and they didn't have a great selection.  But it was nice to walk around to kill some time.

We went to downtown Valetta, which is the biggest city in Malta. It is very beautiful, lots of narrow streets and old buildings. There is a nice view right by the garden & cannons overlooking Malta.

We saw a lot of tourist crowds from cruise ships during the day, and at night the whole city was almost empty once the cruise ships left! 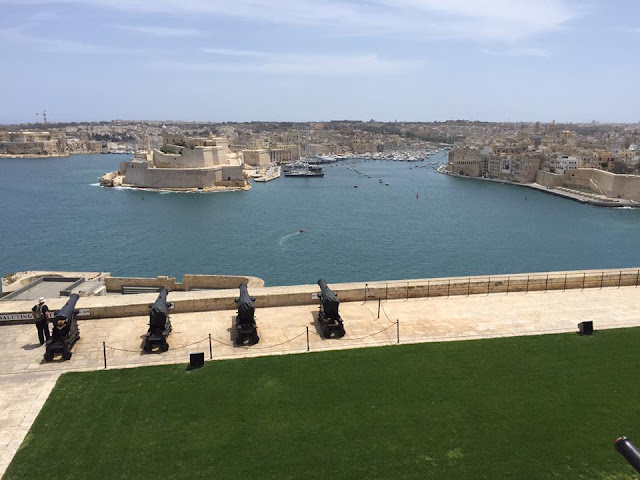 Mdina is the "old town" , and the previous capital before Valetta. The taxi ride cost around 25 euros each way from our hotel. Mdina is much smaller and quieter compared to Valetta. We had lunch at a restaurant with great views overlooking the island.

This is the main fish market in Malta. On Sundays, they also have other items besides fish where the locals would come and shop (for household items). 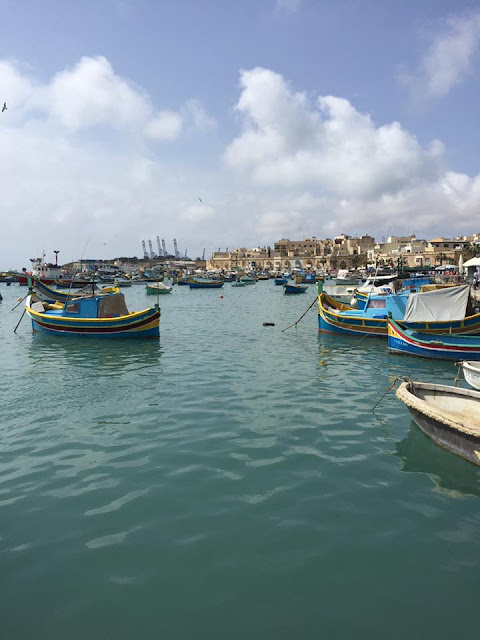 Blue Grotto is one of the main tourist attractions in Malta. We took this small boat that fit 4-6 people, and the guide took us into a couple grottos, where the water was crystal clear and super blue! It was a little scary as there was a little bit of wind, but overall a great experience. 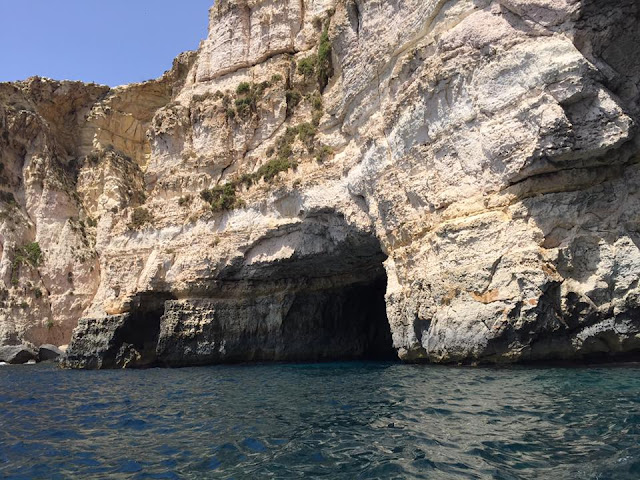 Overall it was a great, quick, trip to Paris & Malta. We didn't take M with us this time, and it was a lot harder than we thought. We found ourselves talking about her all the time, and perhaps this was a little too long for us to be without her. :)

Malta is a nice destination, although I think one week for me (and 2 weeks for Dan) was perhaps a bit too long. You can probably see a lot of the things we did in a few days, so I wouldn't recommend staying for more than a few days.

I would have to stay that the people in Malta are very nice, and I felt safe. Almost everyone we met spoke English which was helpful.
Posted by Marcela at 7:05 PM