We were picked up promptly at our hotel at 9:30 am for our Barcelona city tour. We booked this tour from Hola Barcelona, which was highly recommended from Trip Advisor. Our guide was Jean Pierre, a Frenchman who migrated to Spain some 20+ years ago. He was very nice and passionate about art and history.

We drove passed Passeig de Gracia, the Rodeo drive of Barcelona, which was actually not that far from where we were staying. Our first stop was Casa Batllo, which was a house designed by Gaudi. We heard so much about Gaudi and this was the first of his works that we saw in person. The house facade was very interesting, very sensual and curvy. Gaudi's design is very unique and different compared to other architects during his generation. We learned that Gaudi was a devout Catholic and was married to his work, so he never married a woman. A lot of his work has Christian references as well as nature. As you can see on the roof of Casa Batllo, it looked like the scales of a dragon. We went to visit another house that he designed just down the street called Casa Mila. 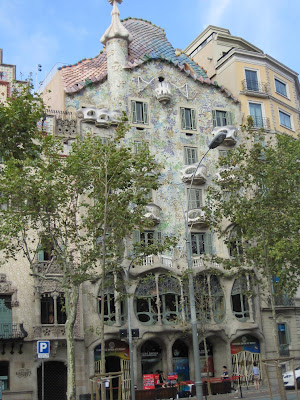 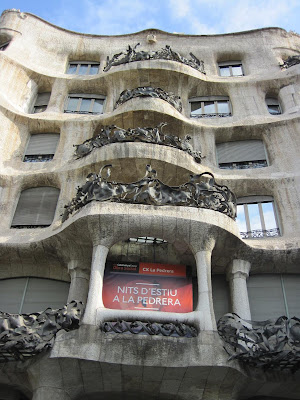 Next stop was la Sagrada Famiglia, or the holy family. This is probably Gaudi's most famous work. When we arrived, we were all amazed by the beauty and the size of the church! Little did we know that the church is actually not nearly done. He never actually finished, so continuous work is still being done with a planned completion date of 2026. There were approximately 3 million visitors last year and with a ticket entrance of 14 euros, they must have enough money to continue building.

Our next stop was Parc Guell. This "park" was originally built as a garden city project, where rich citizens could buy a lot to build a house. The project started in 1900 and was declared a failure in 1914. They were able to only sell one house! Gaudi also had a house here. The park was very unique and there were a lot of Gaudi's work all around.

We went to Montjuic with it’s amazing look out point over the city! We also got to see our cruise ship docked on the port! It got us really excited! Turns out this was our last stop, and we then got dropped off at the port to start our cruise.