Cinque Terre is a rugged portion of coast on the Italian Riviera. The literal translation of Cinque Terre is "The Five Lands", and it is composed of five villages: 1. Riomaggiore, 2. Manarola, 3. Corniglia, 4. Vernazza, 5. Monterosso. Our guide explained that these villages used to be poor fishing villages, and life for the people there was very hard. They have just recently become a somewhat major tourist destination. Now their life is supposedly better due to the revenue from tourism. Some fishermen were now selling souvenirs or opened drink/coffee shops. Not sure if this is true or not, but supposedly Cinque Terre's popularity was partly due to Rick Steves, an American travel writer. We found a video of Rick Steves' travel journal to Cinque Terre which we thought was very informative. Click here to view.


We pre-booked an all day tour to Cinque Terre with a quick stop in Pisa with Joe Banana Limos, a private tour company in Italy. The shore excursion from our ship was outrageously expensive, and surprisingly it was cheaper to do a private tour than to do the big bus group tour via the cruise. So it was almost a no brainer for us to go with a private tour--it's cheaper, we have our own private van and guide, and we don't have to wait for other people in a huge group!  Our guide was Lorenzo, whose English was surprisingly good. Turns out he lived in Australia and New Zealand for a couple years, so it made sense why his English was good. We didn't realize it at the time, but the drive from Livorno to Cinque Terre was about 1.5 hours one way. 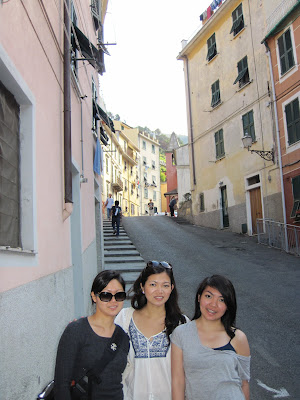 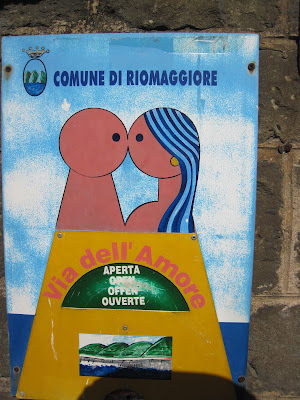 Getting ready to walk the "Path of Love"

The reason why we chose Cinque Terre as our excursion was because half of my family had been to Florence and Pisa before (which is the most popular shore excursion out of Livorno), so we wanted to go somewhere that was new for everyone. I heard about Cinque Terre from one of my well-traveled coworkers and after looking into it, was sold immediately. Looking back, we were glad we chose to visit this small jewel!


The first town we visited was Riomaggore. We followed the Via dell'Amore / Lovers Path. This path connected Riomaggiore with Manarola. The Cinque Terre towns were extremely isolated until the last century. Villagers rarely married anyone from outside their town. After the trail was established, it became lovers’ meeting points for boys and girls from the two towns. The walk was pretty easy for the most part. The view was absolutely beautiful! We noticed a lot of locks on this path, apparently they symbolized couple's love locked forever.

Once we got to the second town, Manorola, we were going to take the ferry to Vernazza (town #4). Unfortunately, the ferry service that day was not running because of choppy waters. There is no port whatsoever, and the so called "ferries" are really water taxis--very small boats. So we ended up taking the train, which was easy enough. We went directly to Vernazza, skipping Corniglia.

Vernazza was bigger than the first two towns. We saw a lot more souvenir shops, and there were restaurants alongside the water. We ate at a restaurant called Cucina Aperta Tutto Il Giorno that turned out to be excellent!!! We loved the lasagna pesto and the gnocchi with pesto. Apparently pesto sauce was invented in the region (not in Cinque Terre per se, but in the larger region of Northern Italy). After lunch, we did some souvenir shopping and then our guide picked us up from Vernazza to go to Corniglia.

Corniglia was the only town of Cinque Terre that was not on the water. Instead, it is located on the top of the cliff. The drive there was torturous and definitely not for the faint of heart. We didn't really have much time here, so we walked around the town for 15 minutes or so, and we got a lemon granita which was excellent and so refreshing! Afterwards we went back to Livorno. We were hoping to make a quick stop in Pisa but the guide said we didn't have time. Boo.

We all loved Cinque Terre and would love to come back some day and explore the area more. Here are some tips based on our experience:
Posted by Dan and Marcela at 7:00 PM