It was nice to have a sea day after 3 shore excursions in a row! We wanted to take the day easy! Dan actually signed up for a poker tournament and won some money, which I then spent on Spa treatment and a new wallet...ha ha.

The Norwegian Epic is a pretty big ship, and there are activities throughout the day that can keep you busy. Here were some of the activities that we did during our cruise:

When we heard about the ice bar on board the Epic, we thought it was pretty cool. There's a $20 fee but you get 2 drinks. They also serve non alcoholic drinks for children. You get a 30 minute time slot to spend at the bar. We checked in and were given gloves, a coat, and 2 drink tickets. The bar area was actually REALLY small. It was pretty cold inside but the coat and gloves helped. It pretty much felt like you were in a big freezer. 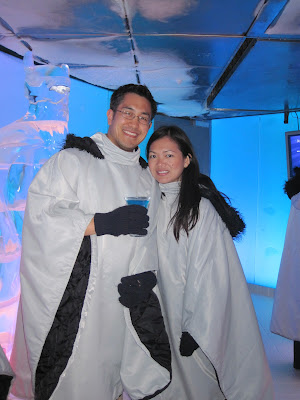 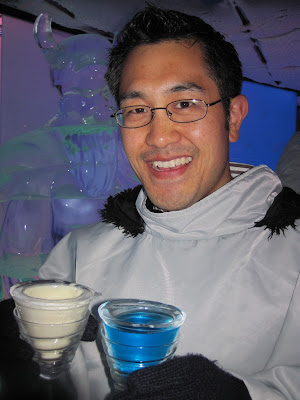 
The teppanyaki specialty restaurant was one of the extra charge restaurant we tried. It was $25 per person which was a pretty good deal we thought.


My sister and boyfriend had previously tried this restaurant a previous night, and they recommended it. They also said that their cook was really funny and the food was good. Typically there do some demonstrations such as throwing/catching the cooking utensils, eggs, etc. Apparently this guy always failed at everything he did so he broke eggs everywhere, but it actually made for a fun night. So we booked a reservation for the whole family and specifically asked for this cook!

Needless to say he delivered. He was really friendly, funny, and he failed at every demonstration he did, but we all really enjoyed him!

3. Dancing with the Epic Stars

This was probably one of our most favorite game shows we watched on-board. My older sister is a competitive dancer so we wanted to enroll her in the competition. Turns out they choose the competitors randomly for people who signed up, and she didn't get chosen. :(

However, we had so much fun watching the dance competition. Basically they drew names of passengers who signed up and they paired them up with the on board staff. Every round there was a different music/dance style (country, hip hop, waltz, etc.) and then the contestants would have to bust out their best moves. Since there was literally no practice, and the contestants were not all dancers, their moves were REALLY funny! We really enjoyed watching this show.


As we mentioned previously, we really recommend getting the weekly Spa Pass. It's really nice to be able to relax at the spa after a full day exploring the different cities. I also got two treatments at the spa, which was nice, although a little expensive.

We watched a couple different shows while on board the ship. The first one was the Cirque Dreams and Dinner show which was pretty good! The second night we watched the Blue Man Group show which was excellent - especially considering it's "free".

On one of the nights, we watched a Legends show where performers imitated stars, Shakira, Whitney Houston, and Elton John. We later found out that my dad thought that all the performers were the real deal! He made a comment that how expensive watching these performers in a concert in Jakarta! Ha, ha... We had to tell him the bad news that they were not real, just the ship's version.


Our most favorite show would have to be the Maestranza Spanish Ballet (Flamenco). We'd never seen anything like it before and were amazed! We got seated on the first row and Dan actually got picked to dance on the stage for a little bit. :p