We celebrated Valentine's Day with dinner at Cyrus.  Cyrus was one of the restaurants that I had been wanting to try for a while.  It has 2 Michelin stars, and a couple of my friends who went said that they actually preferred it over French Laundry (which set my expectations a bit high).  The only other 2 star Michelin restaurant that we have been to was Manresa for our engagement dinner a couple years ago, so we were excited to try another 2 star place. 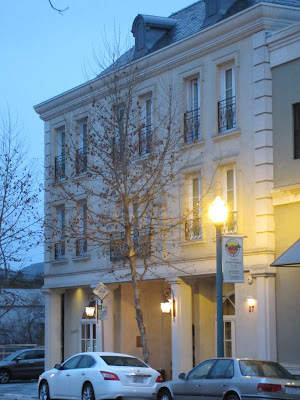 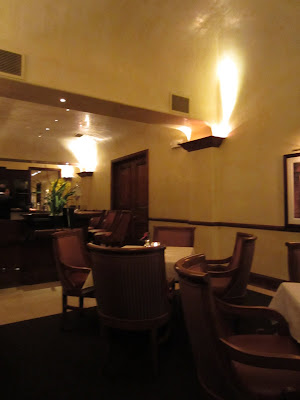 Cyrus was located inside the Les Mars hotel in Healdsburg, which was just a few blocks away from our hotel.  We walked to Cyrus from our hotel, although it was raining a little bit that night. Thankfully our hotel provided a complimentary umbrella for us to take. We didn't come that dressed up so when we peeked inside the restaurant, we were worried that we came under dressed. But since we were eating in the bar area anyways, we braced ourselves and tried to be confident entering the restaurant with not-so-formal attire.

Reservations are supposedly easier to get then French Laundry.  However, we planned on eating in the bar area so didn't make reservations.  We noticed that some high end restaurants actually serve similar menu items from the bar, and since we just spent a fortune at our French Laundry dinner not too long ago, we figured the bar would be a great way to try Cyrus without spending too too much. Plus, we didn't feel like eating a 5-8 course meal served at the main dining area this time around, so eating from the bar sounded like a good alternative.


The pricing for the bar area was pretty reasonable.  The portions were supposedly quite small, so the waiter recommended ordering 3-4 courses each.  We ordered 3 courses each, and it was actually filling enough.


The kitchen actually provided several amuse bouches....the first one was a straw filled with lemon candied powder, which reminded us of...powdered candies.  :)  The second one was a shitake mushroom soup/broth, tasted like...mushroom broth.  :p  Both of the amuse bouches were so-so.  We were not blown away by what we had eaten so far.


My first dish was the white pumpkin tagliarini, and this was probably my favorite dish. The coddled egg yolk was served on the table.  The noodles were very soft and somewhat reminded me of ramen, but I'm sure it's not ramen.  :p  It's a soft pasta served with crunchy squash seed for a texture contrast.  The sauce tasted cheesy and very creamy--a bit on the heavy side.  We also ordered the black truffle for an extra charge.  It was good, but to be honest, I couldn't really taste the truffle all that much.


Dan's first dish was the pork belly.  He really liked this dish--very simple and clean.  The pork belly was very soft with a slight crunch from the skin.  There were small bits of kim chee which Dan said was actually pretty good.  The dashi also had a slight kick.


I don't think we'd ever had beef cheek before, but decided to give it a try.  It was cooked a little too rare for our taste.  We also noticed that the cheek was a little richer and had a different texture than other beef cuts.  I could only have a little and gave the rest for Dan to finish.


We also felt the duck breast was a little too rare for our taste.  So definitely speak up in advance if you prefer to have your meat cooked differently.  We were not aware that both meats would be cooked on the rarer side.  The bamboo rice tasted like risotto and looked like there were pieces of foie gras.


For our third course, Dan ordered the assorted cheese plate, and I ordered the butterscotch "sundae." The cheese plate was good, but all were on the stronger / harsher side.

The cheese course actually came with quite an accompaniment. There were several bread and crackers choices, apricot butter, and fig/nut composite type thing.

My dessert was the butterscotch sundae.  The sundae was probably one of the best "fine dining" desserts I've had in a while.  The vanilla "ice cream" was not really an ice cream; the consistency was more similar to a semi freddo.  It tasted more like a cold cream than an ice cream. There was a chocolate/cookie soil on the bottom with some toffee/nuts, and the popcorn tuille had a slight salty taste to it.  Combined, it was the most perfect taste!

Links to our Valentine's Weekend in Healdsburg Trip Report:
Introduction