We have a "tradition" to go to a steakhouse for Dan's birthday. It's funny, but there aren't a lot of really good steak places around here. And we felt like we've been to a number places so far, so we're running out of places to go. :) Let's see--we have done Morton's, Ruth Chris, Arcadia, Spencer's, Birks, Forbes Mill, and Alexanders--so we wanted to go somewhere we haven't been. We decided to try Fleming's Steakhouse this time around. I had been to Fleming's a LONG time ago, when I was in college, and remembered it as being really good. Thinking back, it was when I was in college when I didn't have that much experience eating at nice restaurants. :p At any rate, we were set to give it a try.

Dan joined the Flemings' mailing list, so we actually got an offer for a $25 credit. The timing was perfect! We booked a Saturday night dinner which was easy enough to reserve online. Fleming's is located in Palo Alto, at the Stanford shopping area. We arrived on time and were promptly seated in a nice booth. They also acknowledged the note on the reservation that it was for a birthday, and let us know that they would be giving us a special treat.

We ordered the Fleming's Salad, Lobster Tempura, Filet Mignon, and the Fleming's Potatoes. They brought out the bread which was served warm. I always really appreciate places that serve warm bread! 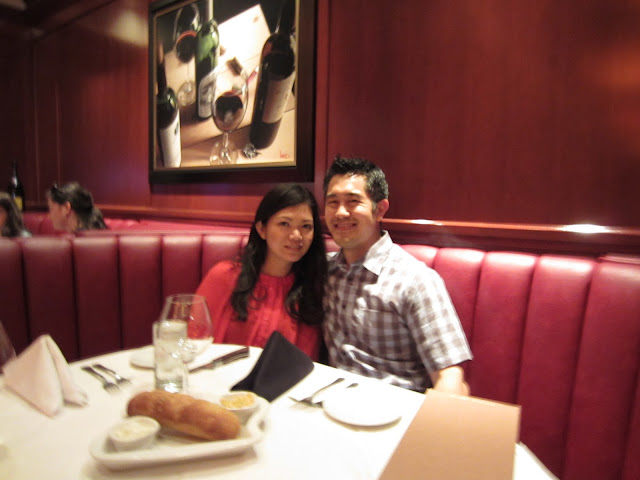 And they actually split the salad for us, which was nice. The salad itself was ok, nothing special. It had lettuce, candied walnuts, dried cranberries, tomatoes, onions, and croutons.


My lobster tempura came next. It was quite good and I was surprised that the size was actually pretty big, even though it was considered a "small plate/appetizer". There was a mayonaise-y dipping sauce and a small side of Asian salad which really complemented the lobster tempura.


The filet was actually just ok. We didn't enjoy it as much as we thought we would. It probably isn't fair that our last great steak was at Peter Lugers in Brooklyn, so our bar was set a bit high. The meat just wasn't as soft and juicy as we would have liked.


The Fleming's potatoes were actually quite good. It was actually the house specialty and tasted like cheesy scallop potatoes.

We were contemplating whether to get dessert or not and finally decided to go for it! We got the molten chocolate cake with vanilla ice cream & chantily cream. The chocolate cake was good, and we surprisingly really enjoyed the chantily cream. It was served cold and tasted almost like ice cream. We're usually not big whipped cream fans, but this one was just quite special.


At the end of our meal we got a box of chocolate truffles for Dan's birthday, which was a nice gesture.

Overall it was still a good meal, but we were not blown away. Price was actually pretty reasonable - especially considering the $25 credit.
Posted by Marcela at 6:01 PM