I have always wanted to try the fried chicken dish at Ad Hoc, which is one of Thomas Keller's restaurants in the Napa Valley. However, they only serve the fried chicken every other Monday, and reservations are quite hard to get. My friend told me about this fried chicken shack behind Ad Hoc called Addendum, also owned by Thomas Keller. It seemed like a really good alternative, especially considering the more affordable price and that I would not need to make any reservations. 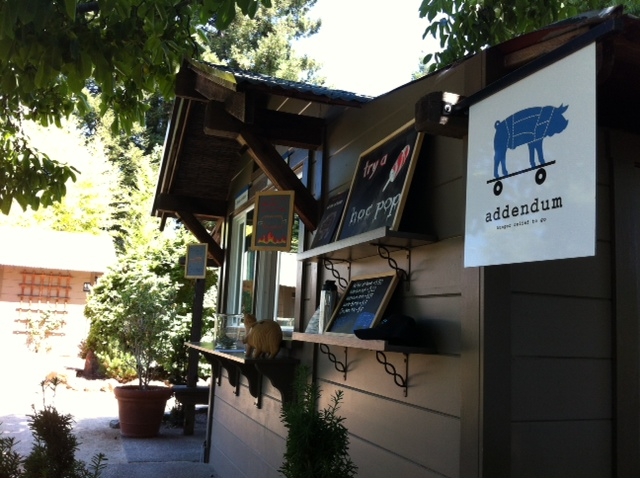 Dan's parents live pretty close to Napa, so on our last visit to their place we took a day trip to Napa and finally made our way to Addendum. The shack only opens from Thursday to Saturday, 11 AM to 2 PM. We were a bit worried about the long lines, so we came a little bit after 11--there was a short line already, but not too bad and it moved pretty quickly.

The shack was located behind Ad Hoc's parking lot. There's a mini-garden area surrounded by picnic benches and trees; it's actually quite a cute area. I also really appreciated the shade! Napa weather can be quite hot during the summer, and even though I like to be outside, I can't be out in the sun for too long. It was nice to be able to sit in the shade. 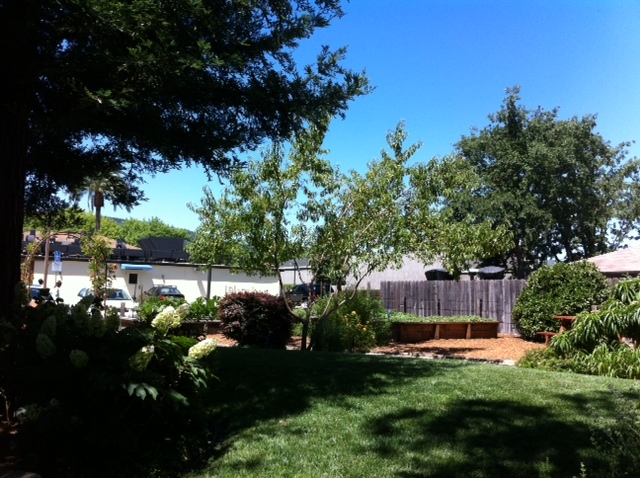 There's only two items on the menu: BBQ pork or the famous fried chicken. We knew that the fried chicken is what people would recommend getting, which we did, but we didn't know if we could eat two orders of fried chicken. So we ordered one of each. Each dish cost $16.50 and comes with two sides that change periodically. During our visit the side dishes were boiled potato salad and corn succotash. We also ordered the Hoc Pop for dessert. Our total bill was about $40 (not including drinks - since we brought our own), which was quite pricey for a picnic lunch. But considering the fried chicken dinner at Ad Hoc is $52 per person before tip and tax, this was definitely a great and (relatively) more affordable alternative. 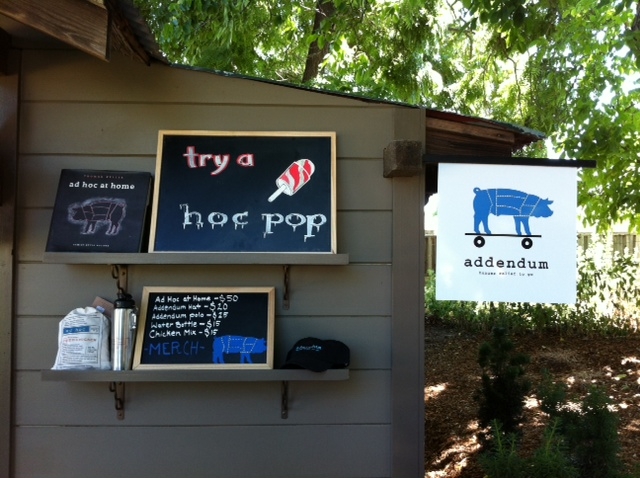 We sat at one of the shaded picnic benches and waited for our food to come. There's a runner who brings out the order in recyclable bag and containers. I think it took around 20 minutes for the food to come. You can also call in advance if you are in a hurry and they can have the food ready for you. 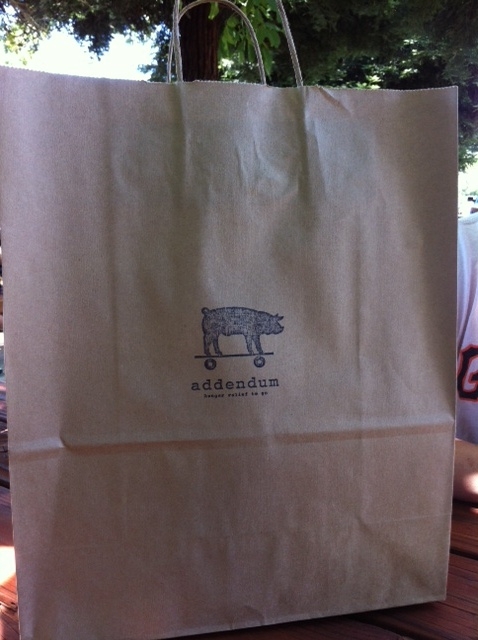 We were really looking forward to finally trying the famous fried chicken, and I was a bit worried that it would not meet my high expectation. After all, it's just fried chicken. I took one bite, and I understood what they hype was all about. The skin was breaded perfectly and was crunchy, but the inside was very juicy and moist. I didn't even notice that it was actually white meat because it was very very moist. There was also a slight saltiness from the skin, which balanced out perfectly with the yummy cornbread. 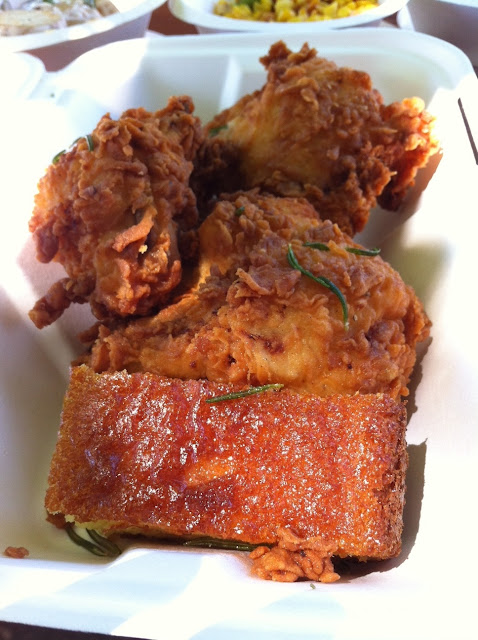 While I was monopolizing the fried chicken, Dan started to eat the BBQ dish--pork short ribs, which was also served with corn bread. He really enjoyed the ribs. I liked it too; the meat was definitely very moist, but I prefer my rib with wet BBQ sauce. This particular one was a dry rub, so I didn't feel it was super tasty and a bit mild for my taste. 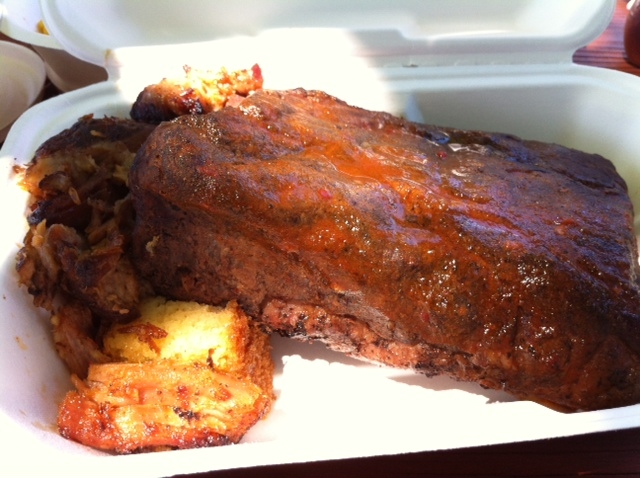 Both the side dishes were quite good. They were very simple but good dishes and the perfect accompaniment for our picnic lunch. 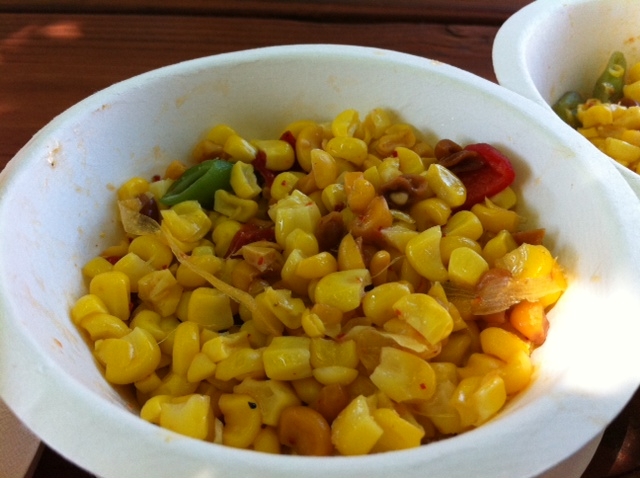 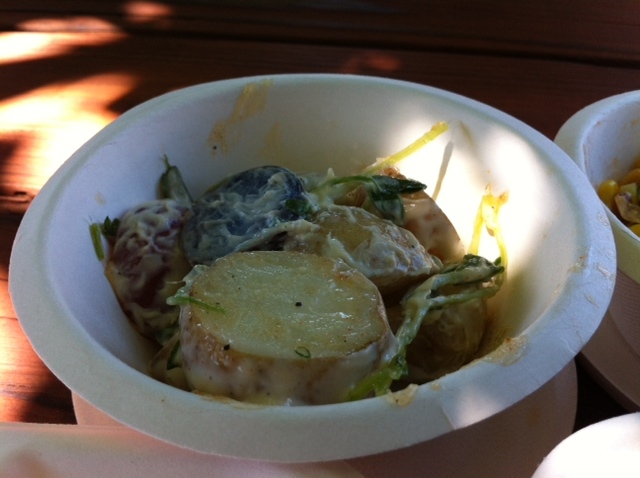 The portion size was quite generous. I think ordering one of each was a tad too much for us (although we still managed to finish).

We picked up our hoc pop dessert, which was their homemade push pop. I think it was pineapple coconut. It was very mild and actually not too sweet. We both felt the hoc pop was just ok and for $5, quite pricey. But again, this is Napa. :) 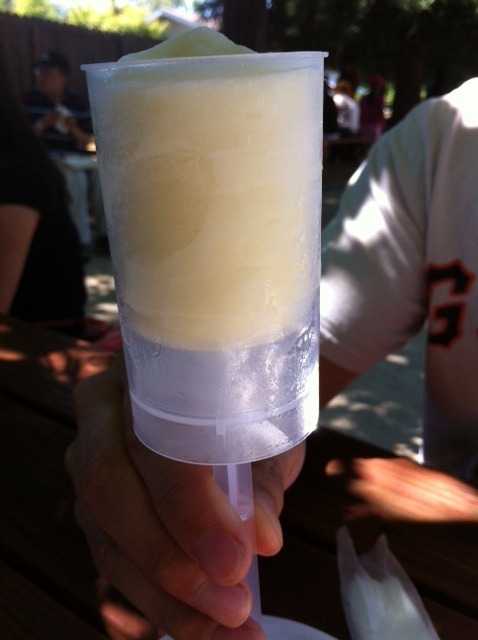 Overall we had a really enjoyable picnic lunch at Addendum and would highly recommend it. Be prepared to spend about $50 for a two person meal. We were there in the summer and the lines were not bad at all. If you have always wanted to try Ad Hoc's fried chicken but haven't been able to get reservations, come here instead!
Posted by Marcela at 2:10 PM