Michael Buble is one of my favorite artists. We missed him when he had a concert in San Jose a couple years ago, so when Dan heard that he was coming back, we snatched up tickets right away. We had been so looking forward to this day, and he definitely did not disappoint. 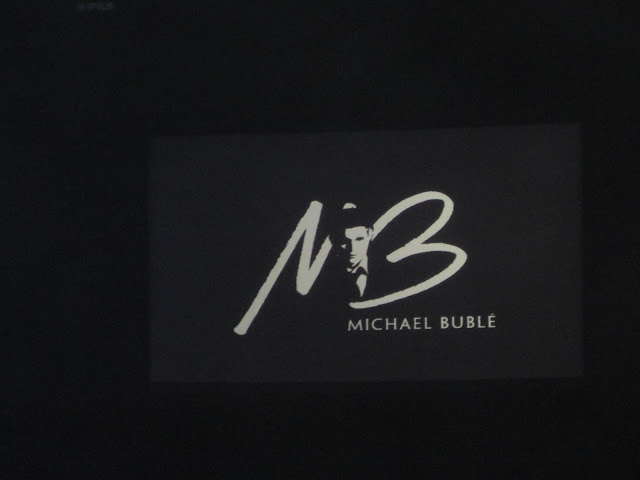 We started with dinner at La Fondue, which is obviously a fondue restaurant. :) Originally we were going to grab dinner at Arcadia Steakhouse, one of our favorite restaurants in San Jose. But we decided to switch it up last minute, since we had not been to La Fondue. We had a pretty good experience at Rok Bistro a couple of weeks ago. La Fondue is located in Saratoga, and valet parking costed $8. Thankfully we found public parking 1 block away for free!

We were seated in a very dark room, which we later realized was the "couples" room, since the tables were all tables for 2. When we went to the bathroom, we passed other areas for families and larger groups, which had better lighting. Our dining room was very dark where we could hardly read the menu. We're guessing they are trying to make the ambiance romantic.
We ordered a la carte and chose the following:
The first entree was the 4 Cheese fondue. The cheese fondue came with bread and vegetables to dip. The server mixed the cheese and champagne on the table so it was cool to see. The cheese however, was a little disappointing. There wasn't a whole lot of flavor and the champagne taste was a little too strong. We realized that we prefer a sharper cheese for fondue (like cheddar).


The sirloin was pretty good, and they gave a large portion. We were definitely full, and it was more than enough to share! As we mentioned before, our dining room was very dark, so it was hard to know whether the meat was cooked or not so we just guessed. :p

Even though we were full, there's always room for dessert. We ordered the Danger Mix dark chocolate, with English toffee bits. Dessert was definitely fun to eat and deliciously rich and heavy. Dan really enjoyed the dark chocolate mix!


Overall we thought the restaurant was alright. It's probably on par with Melting Pot, and we surprisingly preferred the Rok Bistro in Sunnyvale. Dinner took almost 2 hours and we headed directly to the HP Pavilion for the highly anticipated Michael Buble concert!


We sat in section 102, row 11, which were pretty good seats....well, good enough for what we were willing to pay. :p The opening act was Naturally 7, an interesting, no instrumental background accompaniment music - a capella band, and they were awesome. We were both very impressed with their crisp, amazing performance. It totally sounded like they were playig actual instruments in the band although it was all human voice.


Michael Buble came on stage around 9 PM. He was such a great performer and had a great sense of humor. He poked fun at the audience, at himself, and at his band members. He seemed to be a very genuine performer who really appreciates his fans and enjoys what he does, and obviously very good at what he does.


In the middle of the concert, he started walking toward the middle section of the floor, and started performing right there. We secretly wished we had one of the middle floor seating so we can see him closer!


The performance ended around 11 PM and he earned his standing ovation. We both had such a great time and would definitely come again to his next concert. :)