Our friend who is a Yelp Elite invited us to a free Yelp event in Palo Alto. We RSVP'd and luckily got a confirmation (apparently not everyone who RSVP'd got accepted). The event was held at the Garden Court hotel in Palo Alto, and it was a Hawaiian theme. We have never been to an event like this before, but we expected lots of good food since it was hosted by Yelp. We registered at the check in area, and there was a suggested donation to a non profit organization. We obliged to be nice...hehe. Some people who came really dressed Hawaiian, with leis and hair flower.

Our first stop was the shave ice machine. It's self serve and was a little disappointing. More like sno-cone, nothing like the real Hawaiian shave ice. I guess it's free so can't complain too much! We saw our friend and chatted a bit, and she said there was not that much food....hmm...

There was a live band playing Hawaiian music which was a nice touch. We walked around the first floor area and decided to check out the 2nd floor where there supposedly was more food. The 2nd floor was also surprisingly small, and there wasn't much food. :( We got 2 slices of mediocre pizza, a few items from the veggie platter, beef teriyaki satay, and a chocolate dipped apple. It sounds like a lot but it really wasn't.

We came back down and surprisingly bumped into an old friend who lived nearby and who has been to a couple Yelp events like this. They said this time the food was not as good as usual.

We then checked out the chocolate fountain, got some coconut water, and headed outside. FINALLY we saw something that interested us, a s'mores bar! The s'mores bar was setup very nicely (compliments of Li'l Puffs)with miniature tiki torches. We tried some of the marshmallow flavors (chocolate, rasperry, passionfruit), and then made our own s'mores! I made one with chocolate + hazelnut + raspberry marshmallow. Dan had one with peanut butter + Ghirardelli chocolate + vanilla marshmallow. We roasted the marshmallows so they turned out warm and gooey. They were so good we got a 2nd serving! 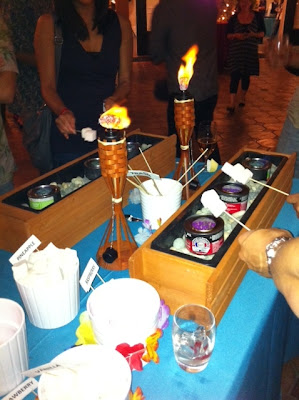 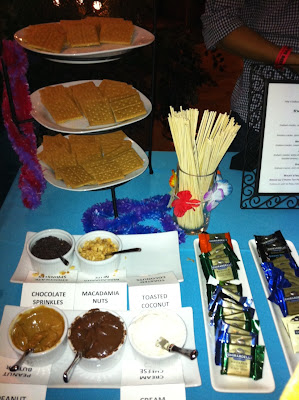 I thought that the marshmallow tasting made the event worthwhile. Otherwise, we probably wouldn't come to another free Yelp event. :p

Afterwards, we walked around downtown Palo Alto and checked out the Borders store that was going out of business. Surprisingly we found some pretty good deals.  5 books for around $25!