We brought a Groupon last year for dinner for 2 at Supperclub in San Francisco. I had heard about this restaurant before and was intrigued by the concept of eating on a bed. The deal was about to expire, so we booked our dinner this weekend. We did not really know quite what to expect, and boy, we had a pretty interesting experience. :)

Seating was between 7 and 7:30PM. We arrived shortly before 7 and found plenty of street parking. (yay for free, easy street parking in SF!) The area around the restaurant was a little sketchy. The first thing we saw were these hanging gold shoes outside of the restaurant. Hmm...if this was an indication of how the night would go, we were definitely in for a unique experience. There was already a line formed outside of the restaurant--apparently they were not letting people in yet. We only waited for a couple minutes and then the host let us in. As soon as we entered, there were hanging gold shoes and a bathtub filled with records and random gold stuff. Interesting...


The host then greeted us and assigned our seat. There did not seem to be a method on how he/she assigned seats. The host was an over the top, overly outgoing transvestite. "She" was very loud but friendly and yelled, "Love you!" to everyone who came in. :p


After checking in with her, we were assigned our "bed". We were directed to the bar area where they served drinks with very interesting names such as One night stand, Morning breath, Tuck me in, etc. I got the "Lullaby" which had some pomegranate juice and blueberry. Dan got a normal glass of Chardonnay wine.


After hanging out in the bar area for about 30 minutes, we then proceeded to the dining room, which was a 2 story room with huge wraparound beds. We were both kind of excited to be eating on a big bed! Ours was on the first floor, bed #27, on the left side, behind the DJ table. Our seating was ok but there were a couple times where we were not able to see the performers since our view was blocked by the speakers and/or DJ. There was a couple who got assigned probably the worst seat in the house, which was the back corner seat, behind the stairs. They probably couldn't see much at all. :(


There was popcorn with spicy tabasco sauce waiting for us on our mini table. The popcorn was pretty good (Dan didn't like it as much since it was soggy, but I enjoyed it quite a bit). The waiter went around to get more drink orders; we decided to stick with water. The 2nd floor customers got served food first. We patiently waited for our first course which was a fava bean soup with creme fraiche and corn bread muffin with honey butter. We really enjoyed the corn bread muffin. It was very moist and tasty! The fava bean soup was creamy and a little heavy, and had a slight curry hint which was surprising. 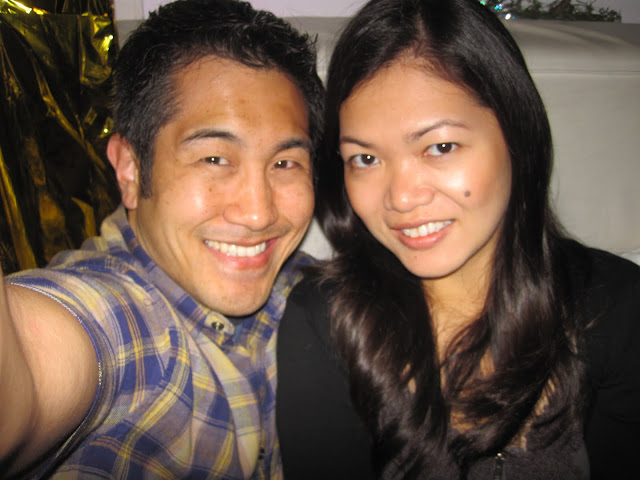 In between meals there were different performers. The first performer was a singer, and we both thought she was really good. Our favorite performance was probably the trapeze artist who was very flexible and strong! :) 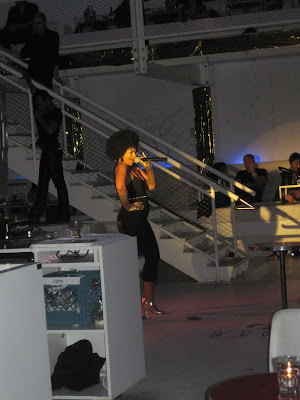 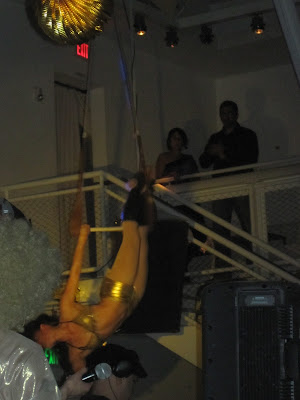 The 2nd course was shrimp & sausage grits served in a doggie bowl. I almost lost her appetite... ha ha. It was fun eating out of the doggie bowl. We thought that this was the main course, but then it turned out the 3rd course was BBQ chicken with potatoes. By this time we were already full. During this time we saw a middle eastern type dancer and a trapeze act (she was really good!).


Dessert was butterscotch pudding (excellent) while we watched our host stripped down...sorry, no picture here! This was probably the most "interesting" performance of all...ha ha.


Overall, the food was ok, but we had a great time and were glad we went. However, we would not recommend this place for children, anyone under 21, or "conservative" people since there were some pretty risque stuff here.
Posted by Dan and Marcela at 10:26 PM