Dan had talked about checking out a San Jose Giants baseball game, which is the minor league affiliate of the San Francisco Giants, his all time favorite sport team ever! By chance, we saw free tickets at our local Trader Joe's grocery store for a Monday game. We picked up the free tickets and ended up going tonight. Coincidentally, Barry Zito (one of the SF Giants starting pitchers) was on assignment with the San Jose Giants and he started that game.


The stadium was a LOT smaller (of course). It looked like a high school baseball field. We saw a lot more kids in this stadium. Since the stadium was really small, there really wasn't a bad seat. Since we had General Admission cheap seats, we got the bleachers/unassigned seats down the right field or left field foul lines. Even then, we thought they were pretty good seats. This was probably the closest ever we'd get to see a major league pitcher pitch. :)


We walked around the ground to check out the food scene and was pleasantly surprised with the selection. The concessions inside the stadium walkway was pretty standard, pretty sad looking actually, but all the food vendors outside looked promising. There was a pizza stand, wine stand, Gordon Biersch garlic fries, Lagunitas IPA beer, and a BBQ place. We split a pizza which was cooked to order in a wood fire oven. After a couple innings, we went for another food run. I got the churros from the churro guy which was AMAZING! It's very unassuming, but it was probably one of the best churros we've had (#1 is at Joya in Palo Alto). It was served warm and very crunchy on the outside and soft and light on the inside. Mmm... Dan got the BBQ back ribs which was also surprisingly good. We even considered that the food here was probably better than at AT&T Park. Maybe it's because we had such low expectations? But we were pleasantly surprised.... 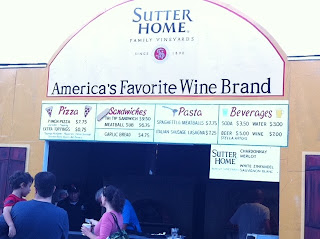 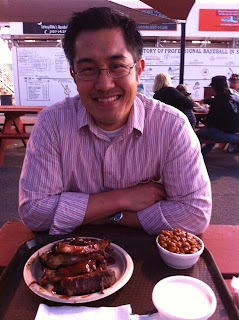 We didn't stay that long and left after the 6th inning since it was getting cold. It was definitely fun, and we would probably go back...and have another churro or two. :)
Posted by Dan and Marcela at 10:57 PM