I had never been to Palm Springs before, while Dan has gone a couple times a year (before we were married) with his BFF. So when we were faced with expiring hotel voucher coupons, we decided to go to Palm Springs as our destination!

Palm Springs is famous for their golf courses, spas, and shopping. It is also famous among older people (we saw a lot of nursing homes), probably due to the mild weather (at least in the winter time). The greater Palm Springs area included Rancho Mirage, La Quinta, Indian Wells, etc. When driving around, we noticed that the buildings in Palm Springs were older, and there were no tall buildings at all. In the downtown area, almost everything was 1-2 stories high. There's almost no new construction, so the whole area felt like an older town. The surrounding areas were actually quite new, and in a way, a little nicer.

We arrived REALLY late on Friday night, like midnight, so by the time we got to the hotel, we were really tired. Since we flew Southwest Airlines, we actually flew into Ontario airport, which was about a 1 hour drive away from Palm Springs proper. For this trip, we actually succeeded in not checking in our luggage. It's been too long since we did not have any checked luggage, and it actually felt good not having to wait for our luggage, especially since we arrived really late! I made a mental note to TRY and not check our luggage for short trips like this.

We stayed at the Riviera Palm Springs, which was an older hotel but has been nicely renovated. I actually liked the retro decor throughout the hotel. As I previously mentioned, most buildings in the Palm Springs area were older, including our hotel. They did a really good job with the renovation though. 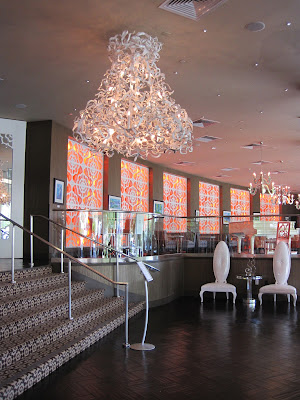 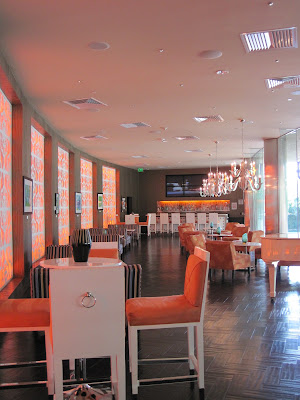 Our bedroom was a little bit on the small size, but the retro-chic decoration made up for it. The bed was HUGE and there's a flat screen TV as well as a small refrigerator. We were in building 7, which was towards the back of the building. We self parked which actually turned out better since there was parking close to our building. Valet would have otherwise cost $20/day. One thing to note, in addition to valet (if you choose to do so), the resort charges a daily resort fee of $26 in addition to the room rate--something to keep in mind.


The bathroom area was also on the smaller side, with a tub and no separate shower. But it had been nicely renovated, although the tub started to show some sign of aging.

Since we got in really late the night before, we woke up a little later and ate breakfast at the hotel. We shared the breakfast flatbread and the pancake. The flatbread was quite yummy. It was scrambled eggs & canadian bacon, over flatbread, topped with hollandaise sauce. It reminded us of Eggs Benedict. When it came, it was served with these potato balls, which Dan thought was similar to Gregoire's fried potato balls (which has the BEST creamy potato balls you can imagine) - but, it turned out to be just a regular potato, not Gregoire's version. :p


We wanted a nice, relaxing weekend, so I didn't over plan on activities! Palm Springs is known for golf/spa and shopping. Since I don't golf, we nixed that option. I would have loved to do a spa day but finally decided against it since we already had a spa day planned for my upcoming birthday. When researching, one of the top activities on Trip Advisor for Palm Springs is biking.We found a highly recommended bike rental place called Bike Palm Springs. We went there and there was a BIG group in front of us (10+ people), so we ended up having to wait for a while before we could get our bikes.


The bikes that they had were all in really good condition--probably the nicest bike rental conditions that we've seen. We were really happy with our bikes, and we chose the upgraded one with the hand brakes (vs. the manual back-pedal brake). The bike rental owners gave us a map and showed us the trail that we could go on. I was happy to hear that it's FLAT in Palm Springs. :) After our previous biking trips to Golden Gate and Angel Island, it was nice to know that this bike ride would be much easier!


We were unable to find the Coachella trail that the owner suggested, which was supposed to be nice since it would be a dedicated bike lane. So we ended up doing the Tahquitz Canyon loop, which was nice, but there were some busy roads involved.


We ended up biking for around 2-3 hours, and towards the end Dan was ready for lunch! We rewarded ourselves with burgers! Ha ha. I found this place on Yelp called Tyler's Burger which was supposed to have the best potato salad! and really good burgers of course. We went around 2 PM and there was still a line. We managed to snag the last potato salad of the day (yay) and it was really good! Most potato salads are too mayonnaise-y, but theirs was mostly potato with the right amount of mayonnaise and a slight crunch from the celery.


We waited a while for our burgers since the restaurant was pretty crowded. We started of eating our potato salad, and finally the burgers arrived. They were definitely good, although not the best that we've had.


After lunch, we planned on relaxing at the pool and swim for a little bit. Unfortunately, the weather was getting chilly, and we were not brave enough to swim (although the pool seemed to be somewhat heated). So we ended up taking a nap at the pool and then got ready for dinner!


A friend of ours recommend Johannes for dinner. The restaurant was located in the downtown area, close by to where the burger place was. The vibe of the restaurant was pretty trendy and somewhat more upscale. Their menu was interesting since they had Spaetzle and Wiener Schnitzel, which made us thought that this was a German restaurant, although the rest of the menu didn't look German-ish. I later found out the chef is Austrian, so it all made sense afterwards.


We ordered a salad appetizer and the cheese spaetzle. Oh my gosh, the cheese spaetzle was sooo good! It's probably one of the best dishes I've had in a while. It tasted somewhat like a macaroni and cheese, but a more sophisticated version, and the combination of the spaetzle and the crunchy onion rings worked so well! I basically finished the whole "appetizer" and gave Dan only a couple bites...:p


By the time our main entree came, we were almost full from the salad & the spaetzle. I could only take a couple bites of my crispy duck, which was excellent. Dan finished half of his schnitzle before giving up.


When we were walking to the restaurant, we passed by Ben & Jerrys and noticed that they carried the infamous Schweddy Balls ice cream. If you haven't seen the Saturday Night Live's segment on Schweddy Balls, you can watch it here. Dan was really excited to finally find it, so we came back after dinner for our ice cream fix!


The ice cream itself is vanilla with a hint of rum, rum chocolate balls and malt balls. It actually tasted pretty good! Dan said this was one of the highlightsof the trip for him. :)

We had breakfast at Cheeky's, which was quite popular it seemed like. We got there around 9 AM and got seated immediately. A line started forming about 10 minutes after we arrived.


Apparently the menu at Cheeky's changes weekly, and they serve organic/locally sourced ingredients when possible. When ordering breakfast/brunch, we always try to order 1 savory and 1 sweet to balance it out. This time, we ordered their Custard egg with homemade sausage and cheesy biscuit for Dan, and the Waffle with banana and nutella for me.


Food was pretty good. The ingredients tasted very fresh, and I've never had sausage that doesn't taste frozen. This sausage taste almost like a hamburger. The biscuit was wonderful, and I loved the consistency of the egg scramble. The banana nutella was pretty good, but it taste almost exactly like you would imagine, nothing out of this world. :p

After breakfast, we stopped by the Southwest Church in Indian Wells for a quick Sunday service. Dan usually visits this church whenever he's down here. After service, we went for a quick bite at Bouchee. They are famous for their grilled artichoke & gruyere panini, so that's what we ordered.

After lunch, we had a couple hours to kill since our flight wasn't until later that evening. I wanted to check the Palm Springs Aerial Tramway, since it's listed as the #1 attraction on Trip Advisor. Dan reluctantly agreed. :p From the main entrance, we drove in for about 2-3 miles. And at this point I could tell that we are already at a higher elevation. We parked our car and walked to the main building. This walk was actually quite tiring, maybe because I'm out of shape. :(


The tram runs every 15 minutes and costs $23.95 per person. The floor of the tram actually rotates so passengers get a well rounded view of the area. The journey up the sheer cliffs of Chino Canyon was about a 10 minute ride from the Valley Station – elevation 2,643 ft. – and ending at the Mountain Station – elevation 8,516 ft.

By the time we got to the Mountain Station, we could tell that the temperature dropped by about 30 degrees. There was actually snow up in the mountains. The mountain area is actually a state park, and in the summer, you can go camping, hiking, picnic, etc. In the winter, you can do winter activities (snowshoeing, skiing).


Originally we wanted to walk around a bit, but the 40 degree weather was too cold for us since we didn't really come prepared.


In the end, we're glad we went, but probably we won't go back to this attraction. I can see how it would be a nice trip for families who live around Palm Springs to take their kids to see snow by just riding up the tramway.

The Palm Springs area was surprisingly a lot smaller and the buildings were much older than I originally imagined. The majority of the people we see were older couples or gay couples.

Palm Springs itself was quite small, and unless you are really into golf/spas, there really isn't much else to do. If we go back, I would probably make it into a spa trip.

As usual, our trip revolved around food. :) Some of our food highlights from the trip:
Until next time....