For the rest of our stay, we stayed at the new Element by Westin near Times Square. The hotel location was probably about two blocks away from Times Square. The surrounding area by the hotel was probably not the greatest, but we didn't mind. Prior to staying here, we didn't know that Westin had another brand called the Element, but we were open to trying it since the hotel looked pretty new. 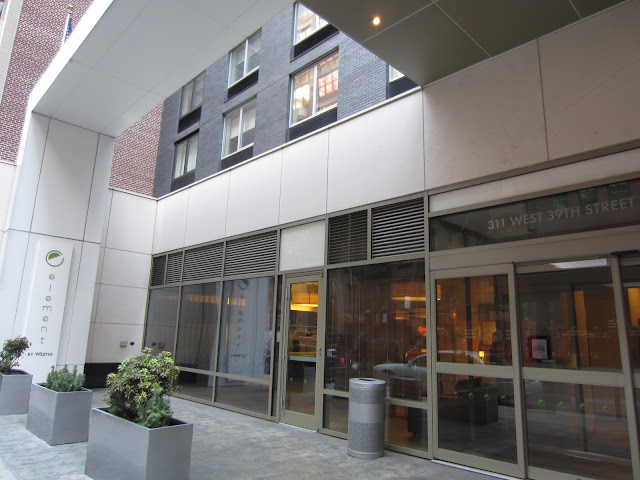 It looked like the Westin brand was trying to market this hotel as a modern, eco-friendly hotel. It seemed to be geared more towards business travelers. They provide free breakfast, free wi-fi, and free cocktail hour from 5-7 PM, which was a really nice touch.

The lobby area was very simple - there was no grand lobby with high ceiling - it was just a regular first floor lobby with big blocks and long tables. Check in was quick and efficient; we actually got to check in early when we got there around noon, which was nice. 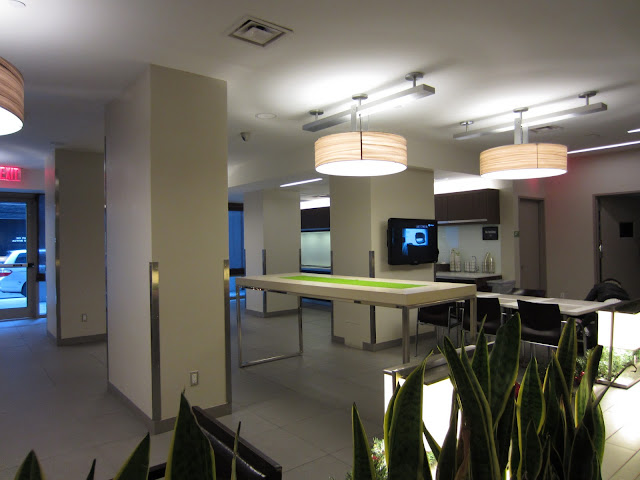 Even though there's no lobby, there's a really nice seating area right next to the lobby where people could sit down, check email, etc. This was also where they held the cocktail hour in the evening and served breakfast in the morning. 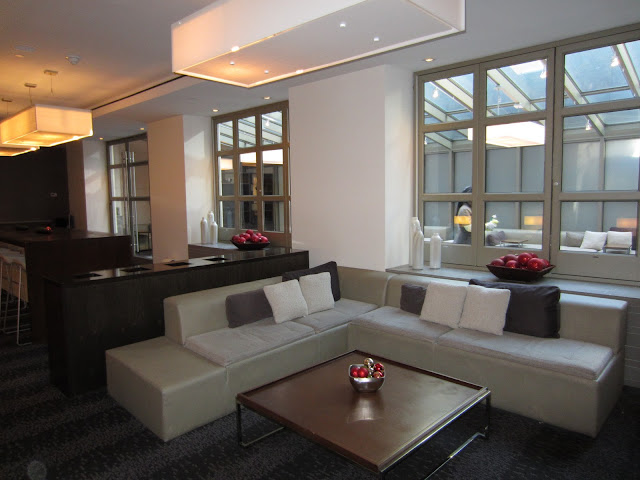 We got a corner room, and it was a pretty good size for New York city. From what I understand, all rooms comes with fridge, microwave, dishwasher, coffee maker, sink, and a full set of pots/pans, mugs, spoon, forks, etc. This hotel would be perfect for a longer stay with this kitchenette area. 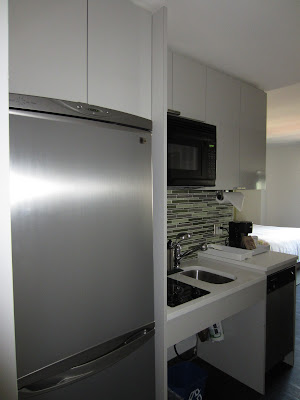 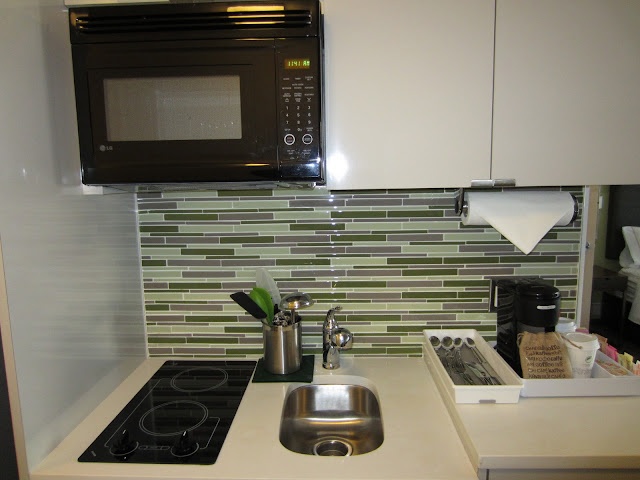 We really loved the modern style of the hotel and how new and well kept everything was. It was such a nice upgrade from our earlier stay at the Roosevelt. 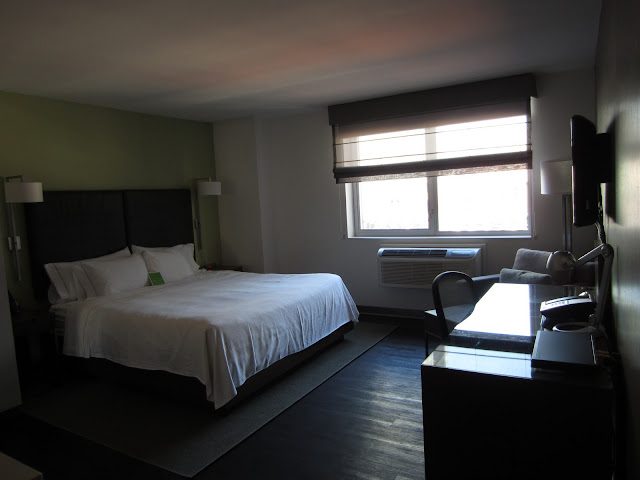 As customary to other Westin hotels, it came stocked with the Heavenly bed. 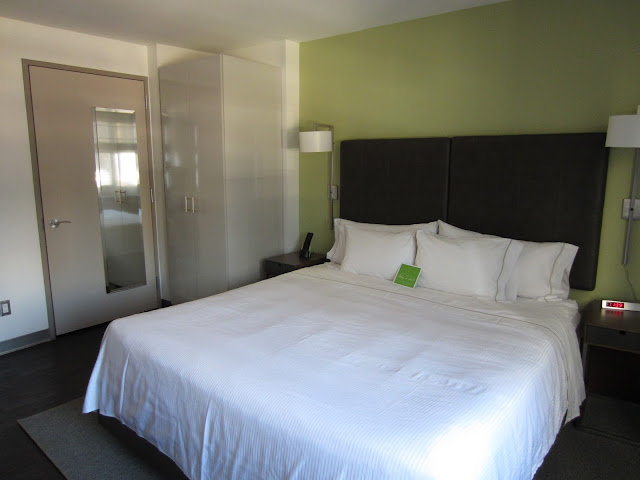 The decor was very zen like, lots of neutral colors, mostly browns and greens. Another thing that was unique at this hotel was that they provided a DVD player - which we really don't see much at hotels. 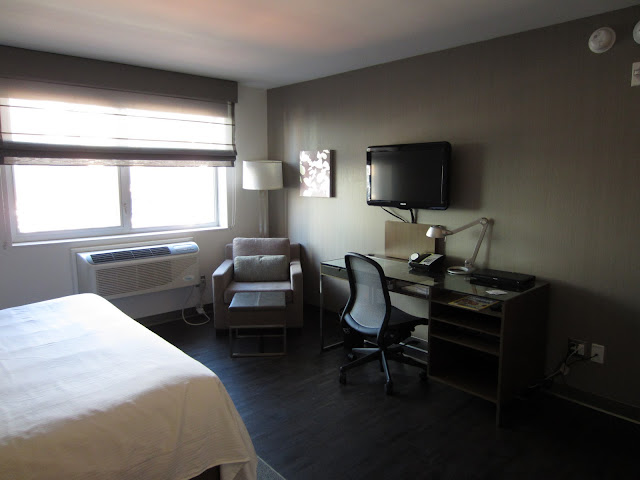 We noted the railings around the bathroom and realized that this was probably a wheelchair accessible room, and that probably explained why the room felt bigger than a typical New York hotel room. 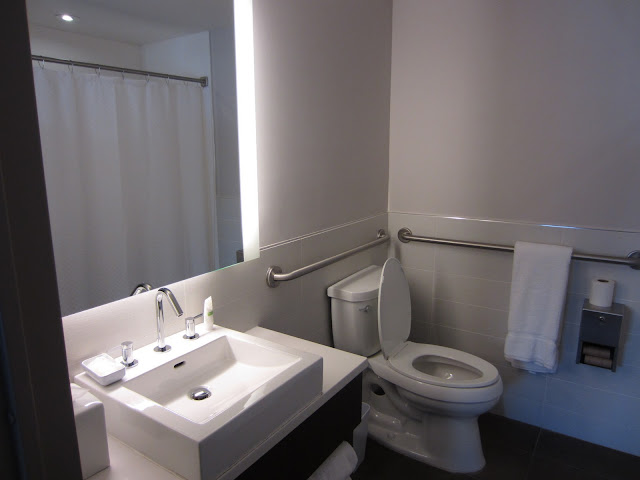 Some of their eco friendly features that I noticed included having a shower gel/shampoo dispenser vs small bottles/packs, no plastic lining on the trash can, and separate recycle bins in each room.

We did check out the cocktail hour one day, and they actually had a pretty good beverage selection--wine, beer, and soft drinks--as well as a hot dish and cheese and crackers. 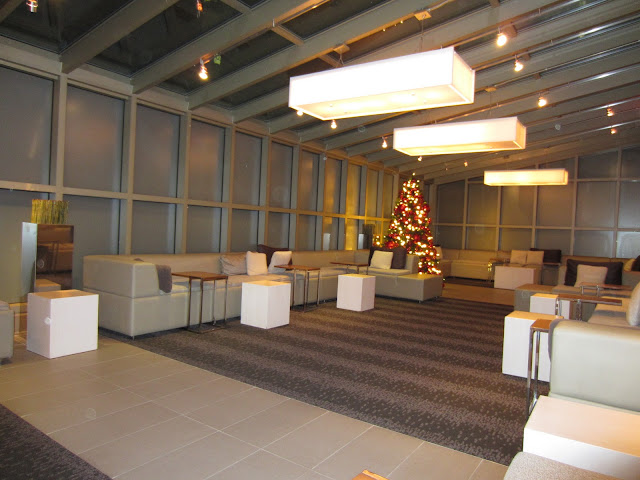 Overall we really liked the modern style of the hotel, as well as the nice touches that they provided such as free wifi, breakfast, cocktail hour, and also to know that they are trying to be eco friendly. Service was also good in general. The one thing that did not score well in our book was the slow elevators. This hotel was 40 stories tall with around 10 rooms on each floor, but there were only 3 elevators. We felt like we waited a while every time for the elevators.

Considering everything, we really enjoyed our stay at this hotel and would definitely put this at the top of our list when visiting New York City in the future!
Posted by Marcela at 11:26 PM