I was contemplating where to go to lunch. There were still a number of places still on the list to try, but since I had to venture out on my own for lunch (Dan had a work lunch), I didn't want to go too far or take too long.

I decided to go back to Shake Shack, this time to Madison Square Park, which is their original location. I wanted to visit the place where it all started, enjoy the Shroom burger, and sit outside. Looking back though, I should have probably visited a different place and not eat Shake Shack twice in one week. :p


I came around 11:45 AM, and also found NO line! Hmm, maybe those long lines are only in the summer? Nonetheless, I was happy that I wouldn't have to wait hours for this. :)


For this location, there was no inside seating; it was all outdoors. I first thought it would be nice to sit outside and enjoy the park, but boy I was wrong!

While I was waiting for my food, I noticed there were squirrels all around the park which seemed normal. However, I heard this girl screamed and saw this fat squirrel eating her fries right in front of her! She tried to shoo the squirrel away but it wouldn't budge! Not sure what she did but it finally left her alone...but then, it found another victim! While another girl was getting a drink, the squirrel ate her fries! When this girl came back to her seat, she also tried to make the squirrel go away, but it wasn't as easy.

For some reason the squirrels in this park were very aggressive and a little scary. The squirrels actually visited almost every table, and people just left or finished their food quickly.


I ordered the Shake Stack (burger + shroom), fries, and diet coke. The Shake Stack was a little too much in my opinion. It was basically a burger with the mushroom/cheese patty on top of a meat patty. I should have just stuck to either the regular or the shroom burger.


After seeing what happened, I grabbed a seat at the park bench (away from the Shake Shack eating area) and made sure to stay very aware of where the squirrels were at all times. I ate my meal in peace for about 2 minutes before a squirrel came and almost attacked me! I ran away and quickly finished what I had.

Needless to say, this particular Shake Shack location was not my favorite. It's probably because it was low season that there wasn't too many people, so the squirrels don't get as much food from the trash can, maybe? I don't know, but they were just way too aggressive.  They were also probably twice the size of regular squirrels--probably from eating all the junk food!

After all the squirrel drama, I made a quick stop to unwind at Eataly, which is an indoor Italian market owned by Mario Batali. It was actually really nice, and I could imagine spending some time to browse around.  But since I was there during my lunch hour and had only limited time, I only walked through the store quickly. The entrance area was the dessert/gelato area. I'm wondering if that's a marketing ploy to actually get people in the store. :p

This was probably the largest Italian market that I have ever seen in the US. There were various sections for wine, meat, cheese, dessert, pasta, etc. There were also various eating areas, and the food looked pretty good. Too bad I was still too full from Shake Shack. :) 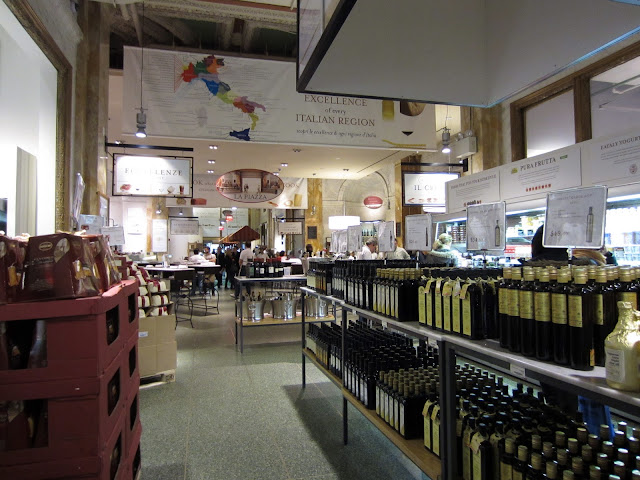 I really liked the ambiance at Eataly. It felt somewhat "gourmet" and high quality. I came across a section for cured meats which reminded me of a similar sighting during our Barcelona trip this past summer.

It was great to have visited this store. Next time I'll have to come with an empty stomach to actually try what all Eataly has to offer.

Before heading back to work, I made a quick stop at Wafels & Dinges which was conveniently parked in front of Eataly! 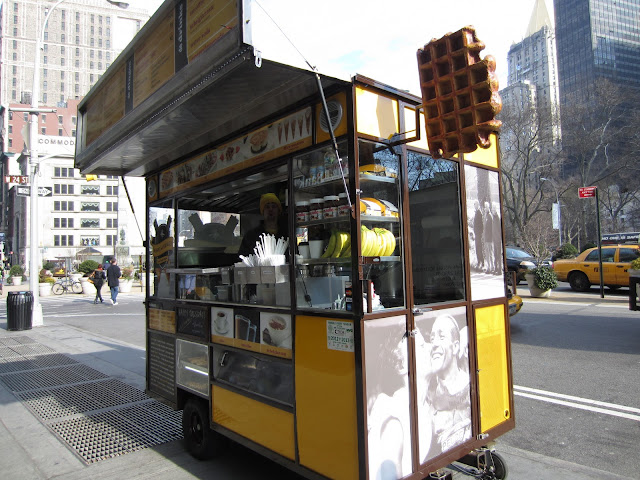 I wasn't originally planning on getting a dessert (or maybe I was?). I remembered seeing the name during my Yelp research, so I couldn't just pass it up since it was right there in front of me! 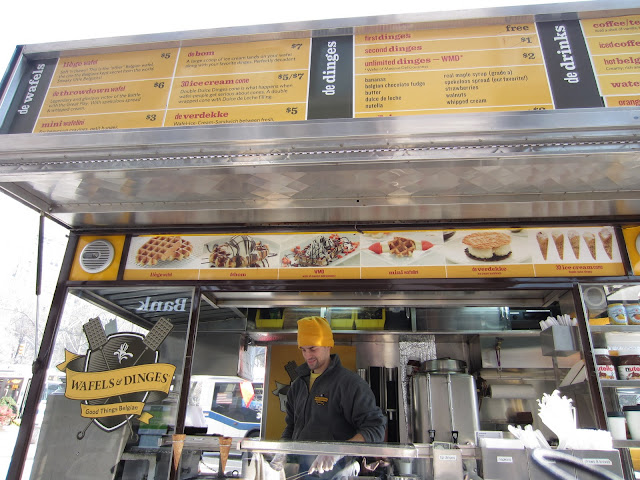 I was still pretty full from Shake Shack, so I got the mini wafel (notice the Dutch spelling for waffle?). The mini wafel actually came with 2 toppings; I chose the spekuloos and vanilla ice cream (+1 dollar for the ice cream). I asked for a sample of the spekuloos and it tasted like a dutch caramel. If you've had stroopwafel before, it almost tasted like the stroopwafel filling. 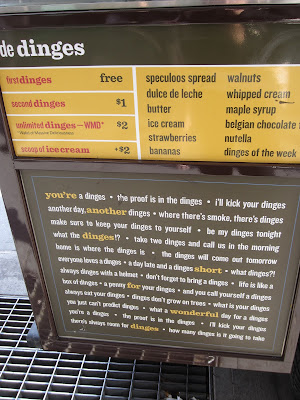 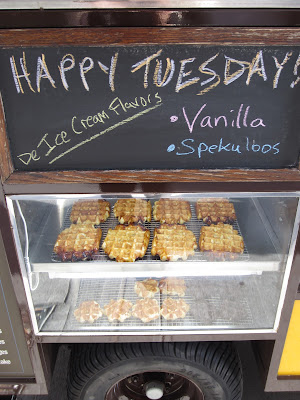 The wafel was served warm with smeared spekuloos and it had a slight crunch. I definitely enjoyed it with the ice cream. I'm glad to have found this place by accident, but my all time favorite is still the Waffle Mania Truck in the Bay Area.