After what seemed like a very long journey (it took us about an hour from our hotel due to subway construction right in the heart of Downtown Manhattan), we finally reached the Doughnut Plant a little after 9AM. I was worried that there would be a long line, but there was actually no line at all. The shop was much smaller than I originally thought. They only take cash, so come prepared. There wasn't actually much of seating area. There were 2 separate seating areas, which had doughnut patterns and a small bar with 2 seats. 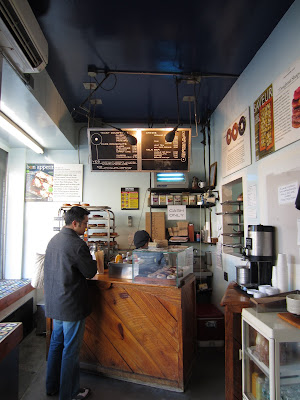 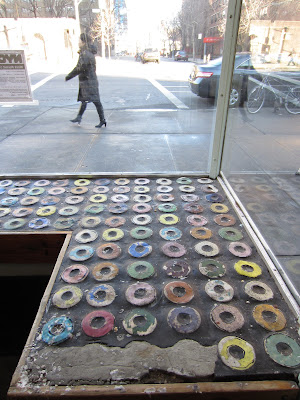 The daily specials were displayed outside on a chalk board. As soon as we came in, we also saw displays of their doughnuts. Interestingly, not all the doughnuts have similar shapes like Dunkin Donuts or Krispy Kreme. Some of their doughnuts were square and huge, some were regular size and round, and some were small without any holes. 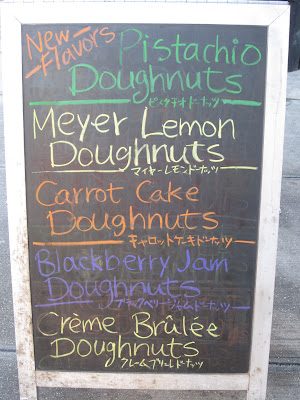 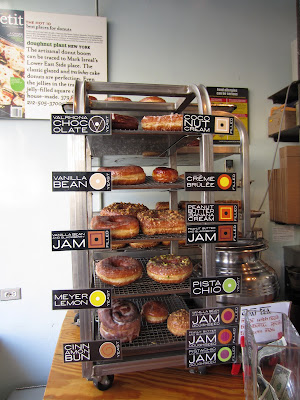 We ordered the Peanut Butter and Jelly, Creme Brulee, and Tres Leches doughnuts. I was expecting the doughnuts to be warm since it seemed like they were making them freshly on site. However, they were not served warm. :(


The peanut butter and jelly was probably our least favorite. It tasted like a big bready doughnut with jelly filling and peanuts on top. However, the creme brulee and tres leches were quite good.  The creme brulle was probably our favorite of the three! It had a crunchy sugary top, and a creme filling. So unique, and it was the perfect combination of doughnut and creme brulee. The tres leches doughnut had more of a cake consistency. A friend of us later mentioned that Doughnut plant is more known for their "cake" doughnuts. So, if you do decide to visit Doughnut Plant, maybe try their cake doughnuts + the creme brulee.

Cafe Habana was actually located in the same general area as Doughnut Plant (within walking distance), so we went ahead and got a second mini-breakfast (or rather snack). They are known for their grilled mexican-style corn. They actually also had a to go counter next door which wasn't open yet, so we went to the cafe.


The cafe looked cute and was quite packed. Thankfully we were able to get seated immediately.  The seating area was very small and the tables were so close together we basically felt like we were eating with our neighbors and could hear their conversation.


The ambiance of the cafe was casual and very down to earth. It made me feel like we're in Miami (or Cuba?). The waitresses were all very nice and friendly .


Since we literally just had breakfast and weren't too hungry, we shared one order of grilled mexican corn. Looked like almost every single table ordered at least one.

We really liked the grilled corn, and it was definitely a great "snack". This place will be on our list the next time we're in NY.

After Doughnut Plant and Cafe Habana for breakfast, we were hoping our hotel room would be ready so we could take a quick shower and nap before lunch, but unfortunately no rooms were ready for check in. :(  So, we hung out at the hotel, and then went to lunch at Peter Luger. 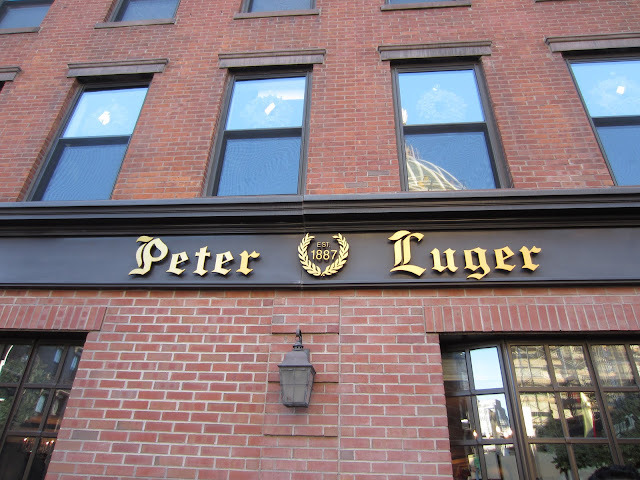 Dan LOVES a good steak so when we were finalizing our New York trip, I suggested that we include Peter Luger since we had heard so much about it. I called to make reservations about a few weeks before and was glad that we were able to reserve a table for lunch.

Peter Luger is located in Brooklyn, which is a little bit of a trek from mid town Manhattan. Originally we were going to take taxi, but Dan thought taking the subway would be very doable. It ended up being a little troublesome due to construction and having to transfer lines, but we made it just in time!

There was a long line when we got there, but thankfully we had reservations so we didn't have to wait too long. The restaurant looked very "old school", starting from the manual reservations on paper, all male waiters wearing white shirts, black bow ties with aprons, and no fruffy decorations or fancy plating.

We ordered the bacon appetizer, creamed spinach side, and the porterhouse steak for two. While we waited, I nibbled on their onion bread and surprisingly really liked it even though it wasn't served warm! Then the bacon appetizer came, and it was basically a really thick cut of bacon. It was pretty good, but not out of this world.


We were originally going to order the steak for one and share, but when inquiring to the waiter which cut it was, he said it was a sirloin. Having read on Yelp that the recommended cut was the Porterhouse, we ended up ordering it the steak for two.


The Porterhouse was HUMONGOUS! It came sizzling hot and the plate was really hot, too! There was a sirloin cut and the filet cut which was slightly more tender and moist. The steak was cooked perfectly, and it had this slight crisp on the outside! We'd never had steak where the outside part was crispy, and we really enjoyed it.

The creamed spinach was the perfect accompaniment. It was so smooth and perfectly seasoned, and didn't feel heavily creamed, but had this surprisingly creamy texture. I would really recommend getting the creamed spinach here!


After our main course and side, we were way too full so didn't get dessert. They gave us 4 Peter Lugger chocolate coins with our bill. :) 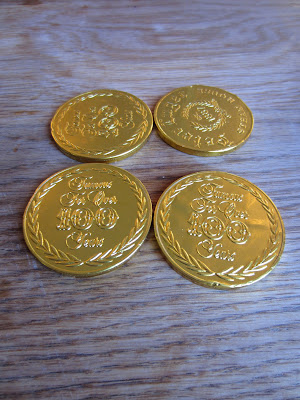 The meat was definitely high quality. It was very good and memorable, although probably not the best that we've had. Dan said it'd be #3 on his list of best steaks he's ever had (#1 at Le Villa Mahana in Bora Bora, and #2 at Gumbos in Austin, TX).

The price was quite reasonable, our total bill was $118 before tip. They only accept cash, check, or Peter Lugger credit card, so definitely come prepared!

Momofuku is one of David Chang's famous restaurants, and we definitely wanted to check it out. They do not take reservations, so we just had to come a bit early and hopefully we're able to get a seat. We chose Momofuku Ssam Bar to visit, which was one of the more "casual" restaurants of the chain along with the Noodle Bar, although I wouldn't really describe the restaurant as casual. Apparently "Momofuku" means the "Lucky Peach", hence the peach icon for the restaurant.


We arrived at Momofuku Ssam Bar around 7 PM, and there was a 45 minute wait. The host directed us to the bar area which was connected to the main restaurant. It was definitely a good way to wait, rather than waiting outside. It looked like a lot of restaurants in the area discouraged people congregating outside while waiting; we saw similar notes at other restaurants. The patrons we saw there were young professionals in their late 20s, early 30s, who came quite dressed up-- or young couples enjoying a hip date night.

Since we were a bit hungry, we ordered the famous pork bun as well as the fried hominy appetizers from the bar. The pork bun was really good! Very simple, but excellent. The bao is very similar like the bao you would get at Chinese restaurants. Inside, the bun is smeared with hoisin sauce, 2 big slabs of tender juicy pork, and pickles. The fried hominy were basically corn flour fries, which was served with a creamy mayonnaise sauce. The pork bun and fried hominy appeared to be the more popular items in the bay area, since we saw many others in the bar order these same dishes.

Hominy is dried corn kernels; this particular dish tasted like big corn fries. The taste by itself reminds us of corn tortilla in a mushy/fried form (like pieces of tamale). It was actually pretty good - especially with the creamy mayo sauce!


After about an hour or so, we were finally called to the main area. We actually had to share a table with a random party, but I guess that's ok. :) At this point we were already a little bit full, but we still wanted to try a couple items from the menu.


We ordered the spicy rice cakes with sausage, mackerel sandwich, and the mixed green with XO sauce. The spicy rice cake was really good! It's basically korean dduk, but I think they deep fried them since they were really crispy! It's similar to this Korean dish called dduk bokkee, but with a modern twist.


The mackerel sandwich was really good as well. The ciabatta bread was toasted, and there were crispy shallot as well as some refreshing pickles. The mackerel was lightly breaded, and the whole sandwich was served warm. It was surprisingly very delicious.


We were unimpressed with the mixed greens-- way too salty for our taste, and we were really full at this point. So, we don't recommend ordering this! :)

Price was actually not bad - I think our total bill was around $70 (including drink and appetizers from the bar). We definitely had a great first impression of the Momofuku chain. For dessert, we went across the street to try Momofuku Milk Bar.

Even though we were really full, there's always room for dessert, right? There was a Momofuku milk bar directly across from the Momofuku Ssam bar. The store was really small, but it was packed!