I am usually not a Courtyard Marriott fan. I have had my shares of Courtyard hotel stays when traveling for work to remote places where Courtyard was a decent choice, but given the option, it wouldn't be my first choice. However, when researching online for hotels in Hong Kong, I noticed how modern and clean and reasonably priced this hotel was, around $150 USD which was pretty good for Hong Kong. Dan also had a free one night certificate that we could use for this hotel, so we booked our stay.


We took the hotel shuttle from the airport, which turned out to be outsourced to a shuttle bus company which took many folks to different hotels, so it was not a direct airport-to-hotel shuttle. We had to wait a little bit for the group to arrive, and then we walked to another area to wait for the shuttle bus. So all in all it took quite some time before we got going. The shuttle itself was OK, but not sure if I would recommend it. We later discovered that taking the airport MTR was probably our preferred way of going into the city. It was clean, fast, and cheaper (HKD 160 for 2 person + HKD 30 for taxi from Central station to the Courtyard).

The hotel was located in a very residential area, that was a bit older looking. There were some mini markets around, but there were not restaurants or places to eat around the hotel. The closest option was probably the IFC Mall where the Central train station was.

The hotel was a very tall, skinny building (which appeared to be the norm in Hong Kong). I think there were close to 30 floors. The lobby area was quite small. There were three check in stations and on the other side there's a small to go cafe/counter and the concierge.


Thanks to Dan's Marriott Silver Elite status, we got "upgraded" to a harbor view room, which was still pretty small, but it was fine. The room was bright and clean, the bathroom was also clean and modern, and there was a view of the harbor.


The bathroom was very open though where you can see it through the glass window, but there was a curtain/blind you could lower for privacy to separate the bathroom from the main bedroom. 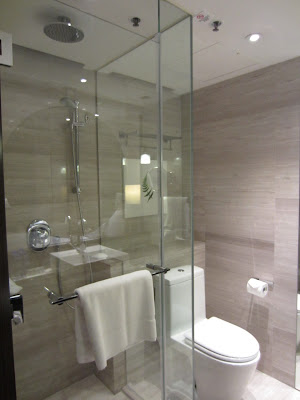 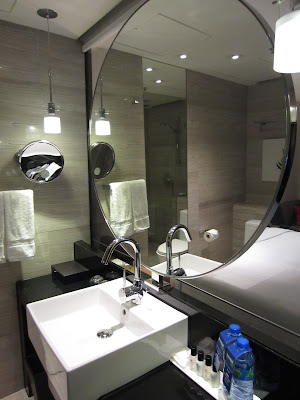 The hotel also provided two complimentary bottled waters which was a nice touch. Service generally was great as everyone was very polite and helpful. There was also a complimentary hotel shuttle bus that ran hourly to/from the IFC Mall. For our first morning in Hong Kong, we wanted to go to the IFC Mall since it was raining outside, so we thought we would just go to an indoor mall and planned to take the shuttle. When the bus pulled in, auto-magically all these people appeared from nowhere and quickly claimed seats in the bus. (I'm pretty sure they were not hotel guests, but residents who lived in the area who wanted a free ride to IFC Mall since the taxi line was outrageous)!

Since the bus was overflowing with people, they had to cut some people. It was crazy! It probably didn't help that we had a typhoon warning that morning, so this was probably the first time people in the hotel were going out. The taxi line was crazy as well. Word of advice, wait outside for the shuttle 10-15 minutes before and stake your claim! :) 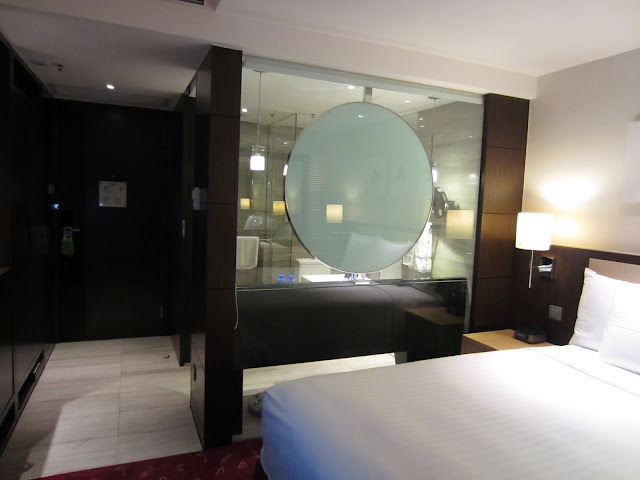 Overall the Courtyard Hong Kong was a nice, clean, modern hotel with good service. We were pretty satisfied with the hotel room itself. The shuttle to IFC Mall is a nice benefit, although be wary of overly eager customers and make sure you wait 10-15 minutes in advance. The rate for this hotel is pretty good for Hong Kong. However, I didn't really like the location that much. It's a little too residential and there's really nothing to do around the hotel. The closest MTR is Central station at the IFC Mall, which means getting around would require either shuttle or taxi to Central station first. I would have loved to be able to walk outside at night and be within walking distance to some night market or cafes/restaurants. Looking back I would probably have paid a bit more to stay in a better area (Tsim Tsa Tsui, Kowloon or Causeway Bay) where there are more things to do within walking distance.