When trying to find award availability for mileage redemption from SF to Jakarta, there was none available for the date we wanted. So I got creative and researched other routes that might work and found pretty good availability through Chicago. It did seem weird that we would fly from SF to Chicago to go to Hong Kong, but since we wanted to use our frequent flyer miles for a specific date we had to be flexible. I figured I would just go ahead and book and at a later date I could switch if a direct flight from SF to HKG became available. Our flight from SF to Chicago was at 6:05 AM which meant we had to be at the airport around 4:00 AM and leave our house at 3:30 AM. Our friend offered to drop us off at the airport which was super nice, but the early departure was a bit brutal. We got to the airport on time and checked in at the AA counter. The lady at the counter was really nice, but she said that she could only check our luggage to Hong Kong and not all the way to Jakarta since our Hong Kong layover was over 12 hours. But she said we can check again with the agent once we got to Chicago.

By the time we finished checking in, the security gate hadn't even opened yet. I don't think I have ever been to the airport so early where security was not even open! We waited for 10 minutes for the security check in to start. We then went to the AA lounge which was quite small but looked nice. One weird thing was that they had a food menu but everything cost money, which I was surprised. I thought lounge food was supposed to be complimentary?


We then went to the gate and boarded seats 3A and 3B, which I didn't realize was actually the first row so we got pretty good legroom. Both Dan and I were so tired by this point so we fell asleep. Full breakfast was offered once airborne with a choice of steel cut oatmeal or cheese omelet.


Dan got the oatmeal and I got the omelet. Portions were actually quite generous, as the main meal was served with fruit as well as a choice of biscuit or bagel. I got the biscuit and it was so buttery and good!! I was supposed to start my low carb diet but the biscuit totally messed this up for me. :p The biscuit was served with butter and jam, and I liked it with the jam. The cheese omelet was ok, a bit too spongy but at least it was served warm. After breakfast I went straight to sleep and didn't wake up until 10 minutes before landing.


When we got to Chicago, we went to the international terminal to get our international boarding passes as well as to check on getting our bags checked all the way to Jakarta. Thankfully the agent said it was possible!

I guess there isn't a Cathay lounge in Chicago so they gave us access to the Swiss Lounge. After security, we went straight to the lounge, and was quite surprised how small the lounge was. There were two main areas, one area faced the runway and was full. The other area was relatively empty when we got there, but got pretty full as time goes by.


Dan was really hungry at this point even though we JUST had breakfast :) so he got some hot dishes. He got breaded chicken, potatoes, pesto pasta and some fruit. The lounge food was actually quite yummy! As time went by, the lounge got even more crowded. We spent 2.5 hours at the lounge before heading to the gate, which was super crowded.


Boarding started with parents with children and elderly, before they called first and business class passengers. We were seated in 19 D and G which were the middle 2 seats, and I thought it was perfect for couples traveling together. The seats looked quite new and I actually loved how private it was. I could still talk to Dan but also still have my privacy. It's also perfect for taking pictures so my neighbors don't give me the evil eye. :)


The business class was probably around 70 percent full. I noticed that behind us were a husband and wife who had a 5 year old son who got to have his own business class seat on the window side. What an awesome life for a kid. :) The seat was quite spacious. There were pillow and blanket provided, as well as "sterilized" noise canceling headphones. 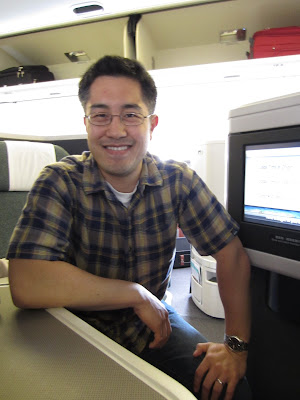 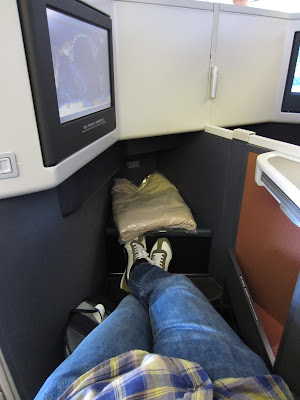 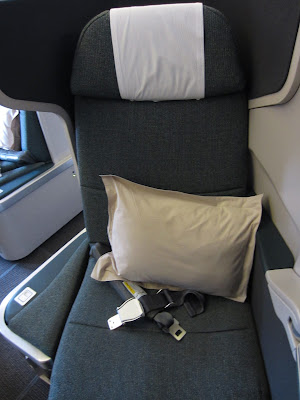 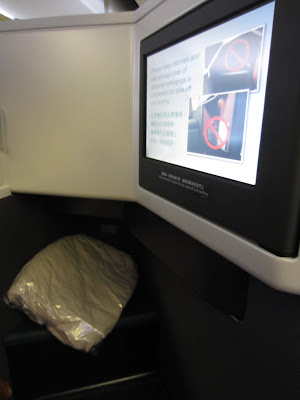 We noticed the lack of an amenity kit but alas, it was distributed a short while after by the flight attendants. We started with orange juice and champagne for our departure beverage and then we both watched the Hunger Games on our own screens.


The menu was distributed shortly, and once food service started, Dan got the chicken and I got the sea bass. Bread was served as well, and I loved that there were multiple choices and that they were served warm. The smoked salmon appetizer was quite good and refreshing, and served with a bowl of salad.


Food overall was decent, although Dan's chicken and my sea bass actually tasted pretty similar hehe. They both had this slightly sweet sauce and tasted somewhat generic. My sea bass was actually quite good and moist, and I enjoyed the fried rice that came with it.


Dessert was this coffee mascarpone cake and I actually didn't like it that much so only had a couple bites. I'm usually a dessert person and would eat almost everything sweet served in front of me, but this dessert just didn't do it for me.


After dinner, we both slept for a few hours. I woke up and was super thirsty so I asked for ice water and ice cream. :) I figured it would be perfect while I watch a second movie, this Chinese movie called LOVE. It was a pretty interesting movie with Vicky Zhou. I think the last time I watched a movie with her in it was probably 10+ years ago!


I had been eyeing the snacks on the menu which were either the Chicago style pizza or this dumpling with noodle, but I wasn't quite hungry. Probably about an hour into my movie the crew started preparing for the second meal service. I asked whether I can forgo the meal and instead have the dumpling. I also convinced Dan to order the Chicago style pizza so I could try it. 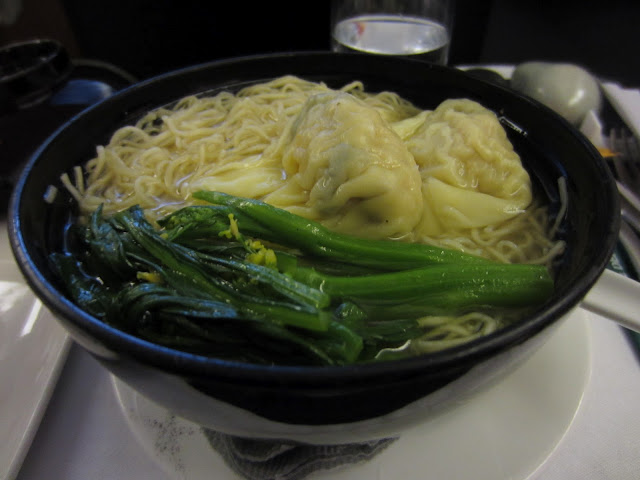 The noodle came with 2 dumplings. The dumplings were not bad, but the noodle tasted very packaged to me. I ended up only eating the dumplings and only had a couple bites of the noodles.


Dan's Chicago style pizza was pretty good. Not quite a real Chicago pizza, but a good snack nonetheless. Dan ended up regretting only ordering the snack and not the full meal since he was still hungry. After the snack I went back to sleep and didn't wake up until they crew woke me up for landing time.

Overall it was a pretty enjoyable flight, although it was quite long, especially considering we had to go through Chicago. Direct flights are still the way to go when possible. We both loved the new business class cabin due to configuration and the amount of privacy. If you're traveling as a couple, we definitely recommend taking the two middle seats. It's really perfect since you can still see and talk to each other, but still have your own space. The window seats would be great for people traveling alone. Service was great as usual for Cathay. This was probably our most favorite business class product so far.