Forced Layover Due to Typhoon Vicente

We knew that there was a typhoon warning that was in effect until 10 AM, and we actually checked with the hotel in the morning to make sure our flight later that day was still on schedule. And at that time, it was. After lunch at Tim Ho Wan, we didn't check again with the hotel and went straight to the airport (big mistake). We took a taxi which cost around HKD 350 from the Courtyard.


When we got to the airport, everything looked relatively normal. It was a bit busy but nothing out of the ordinary. We already got our boarding passes from when we were in Chicago, so we didn't go to the check in gate and went straight to security and then immigration. After we passed immigration, we started to see a LOT of people EVERYWHERE in the terminal, and I could sense something was wrong.

I had never seen an airport this packed before. EVER. I felt like I was at a train station in Indonesia (which are usually super packed). All gates showed flights being delayed, people were sitting everywhere and on the floor. We checked our flight status and it was showing a delay of 2 hours. Not bad, we thought. We went to the Wing lounge, and they had the wall covering closed off, and there was only a small entrance with a man from Cathay manning the door. We showed him our boarding pass, and he said that the lounge was full and they are not taking any more passengers. He directed us to go to the Cabin lounge.

For some reason I thought that there was only one Cathay lounge in the Hong Kong airport, and I also didn't know the difference between all the lounges. We went to the Cabin, and they were thankfully accepting passengers. Although it was very chaotic. The lounge was extremely full. People were sitting on the floor. The line for the lounge agents was around 15 people deep, and we couldn't find seats anywhere. We walked around a couple times and found this video conference room which had 2 open seats and so we sat there for a little bit while still absorbing the situation.


I went in line to see the gate agent, and the person in front of me said he was about ready to punch someone and that it's been frustrating. His flight was supposed to leave in the morning (and it was already 5 PM), and they still had no answer for him. When it was finally my turn, I asked whether there's a possibility to switch to an earlier flight, and if so, whether our luggage will make it with us. She said she can put us on an earlier flight, but the luggage would not make it with us. Dan & I didn't want to risk it so we decided to keep our original flight.

We grabbed some food and finally found better seats in the computer area so we tried to rest as best as we could. I slept for a good hour, and when I woke up noticed that our flight was now showing cancelled. Dan went in line to figure out what's happening, and he came back with 2 new boarding passes for the following morning as well as a hotel & breakfast voucher. We were really, really tired and just bummed with the situation. When we came out of the lounge back to the main terminal area, we saw the gates were even more packed and the line for Cathay's customer service was outrageous-- I heard people had to wait 3 hours +. In a way we were thankful that we had lounge access since lines inside were not as bad.

We tried taking the shuttle to the hotel but apparently all shuttles had left for the night, so we had to take taxi. I was really worried if Cathay provided us with a crappy hotel, so when we were waiting in line for immigration I quickly browsed Trip Advisor for the hotel that was provided, Regal Kowloon. Turns out the hotel looked pretty decent and the rooms quite modern. I breathed a sigh of relief. :) 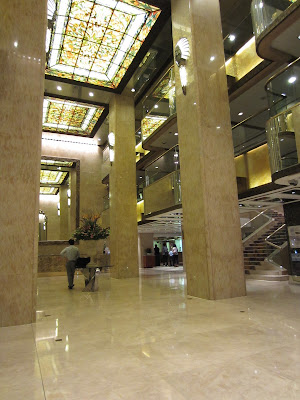 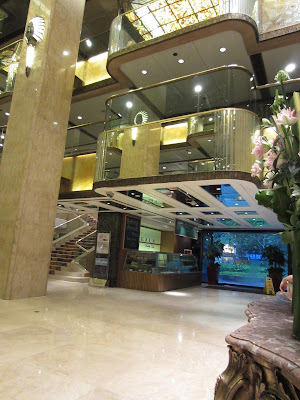 The lobby area was made mostly out of glass and gold, a bit too gaudy for my taste. The hotel itself looked quite old and I don't think the lobby had been renovated.


We got a room with 2 double beds, and they were very firm, which is actually our preference. The room design reminded us of the Sheraton in Munich where we stayed earlier in the year. 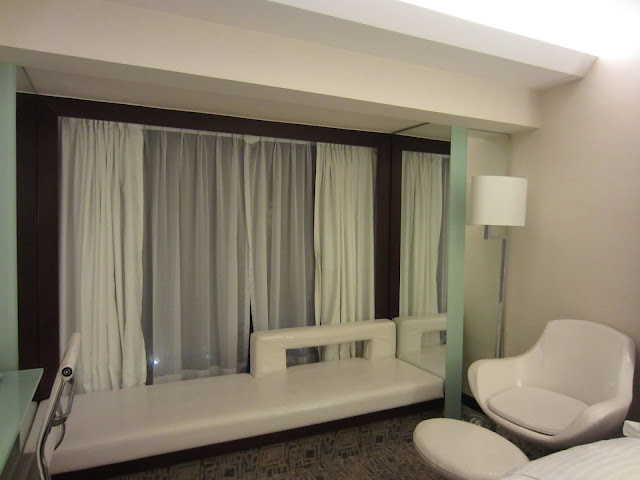 There was a long interesting "couch" next to the window, and most of the furniture was white. 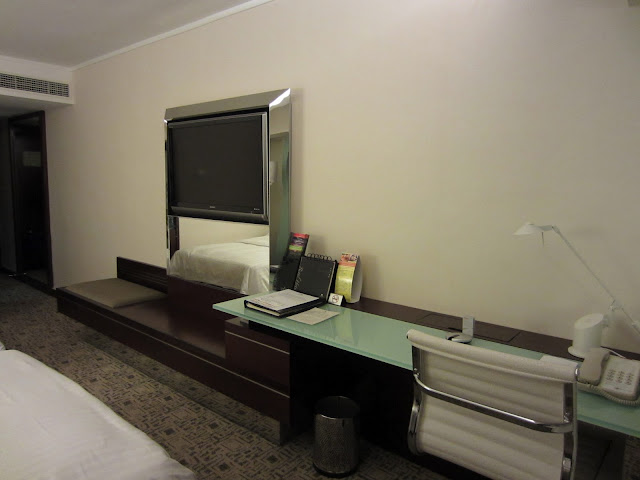 The bathroom was also quite modern, with a bathtub/shower combo. The hotel also provided 2 free bottled waters, similar to the Courtyard. I wonder if it's customary in Hong Kong to do so? What's also interesting was that this hotel had a weight scale (also same as the Courtyard)--wonder why all the Asian hotels have a weight scale in the room. :)


Overall we were quite happy with the hotel that was provided. Probably not my first choice, but for a one night stay comped by the airline, it's not bad. The location in Kowloon was also quite strategic, close to a lot of bars/restaurants and shopping malls. I much prefer this location than the Courtyard. If we go back to Hong Kong, I would probably book a hotel in the Kowloon area.


Next Post: Hong Kong - Jakarta on Cathay Pacific
Posted by Marcela at 9:16 PM