We have been anticipating this flight for a LONG time since it was our very first first class flight ever (thanks to redeeming miles). After spending time at the lounge, we went to the gate around the time the boarding announcement was made. There was already a long line for business class/marco polo card holder; there were probably around 30 people in front of us. The gate agents started checking everyone's boarding pass and passport, and upon seeing our first class ticket, he escorted us directly to the front of the line. Sweet! We felt like VIPs! 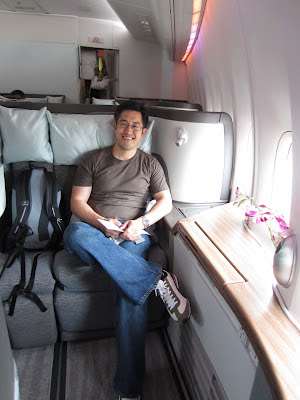 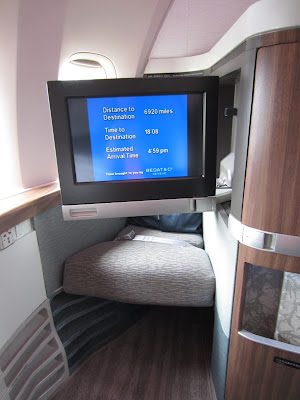 There were 9 seats total in the first class cabin. Each seat was humungous! I sat in 1A while Dan sat in 2A. Looking back, it would have been better for couples traveling together to take the two first row's seats (1A & 1B). 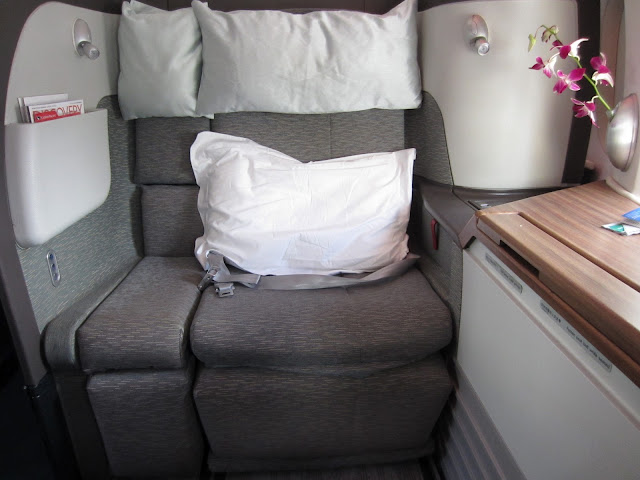 I still can't get over how much space we had. Since we were in the nose of the plane, we could really see the curvature of the plane and the nose directly in front of me. 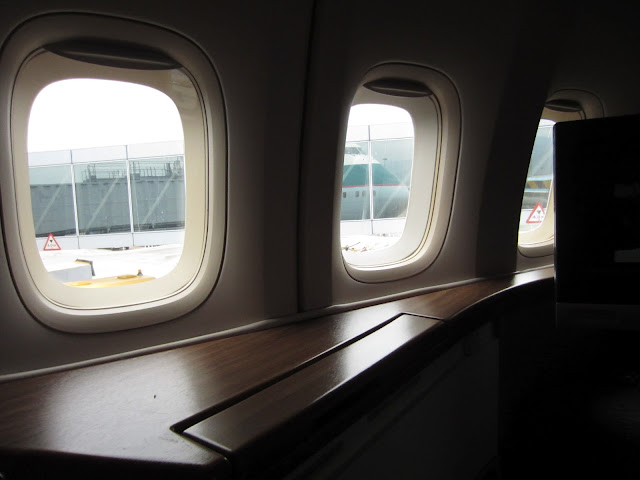 There's also storage space inside the faux wood cabinet, which was handy to store our carry on items as well as clothes if we wanted to change into pajamas later. 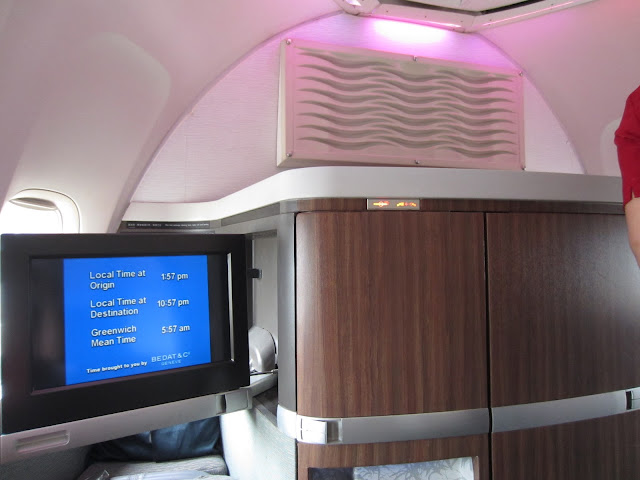 The Shanghai Tang pajamas as well as the amenity kit was later distributed. The amenity kit was really, really nice. The comb for example is made of faux wood and not of plastics that we usually get. We decided to wait until it was time to sleep to change into our pajamas. 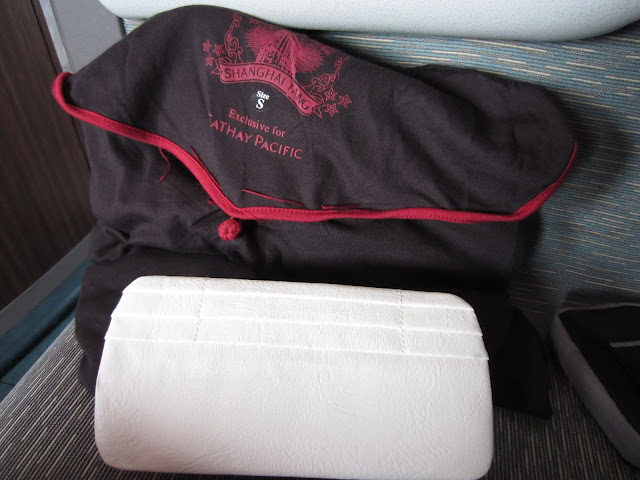 The first class cabin was actually full; most of the clientele were older Chinese/Hong Kong residents from what I could tell. There was one seat occupied by a pilot. 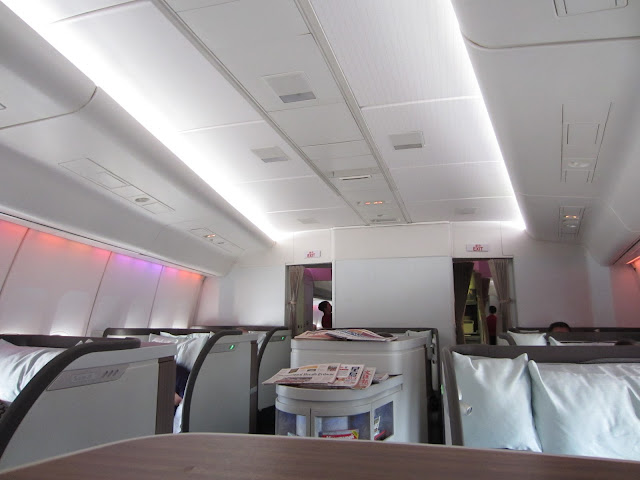 The cabin attendants introduced themselves, and they were amazing. Service was definitely the best we've had hands down. We inquired about dining together since I read previously that it was an option. They said certainly, and asked whether we wanted to dine in my suite or in Dan's. Dan came over and sat on the stool/foot rest in front of me. The flight attendant came and brought a table extension and then setup the table coth with the silverware. 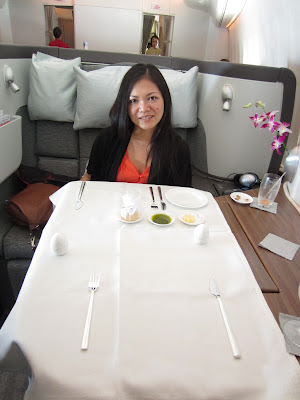 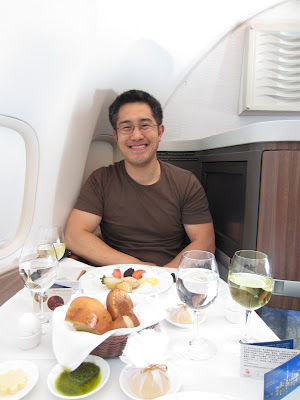 I didn't know this before, but apparently Cathay's first class passenger can order anything off the menu, in no particular order. So if you want 5 appetizers and 3 desserts and skip the mains, you can do so!


We started off with the caviar and the "Tsar Nicolaj" salmon which was really, really good. The caviar serving was generous and I quite enjoyed it. Dan didn't like it as much (pretty salty for his taste), so I ended up finishing his.

Dan ordered the tomato soup which he said was very tomato-ey and not creamy. He said I probably wouldn't like since I typically prefer bisque-style tomato soup.


I ordered the Chinese meal and it was a clear broth with pork, chestnut, and carrot. It was pretty good.


Dan debated between ordering the meat or the prawns, and ended up ordering the prawns. The portion size was surprisingly small, although it's probably good so he didn't overeat. :)


I wasn't actually too hungry at the time, so instead of ordering the main meal, I chose a dish from the "snack" selection which was the hot pot rice. The hot pot rice was served in a clay pot and had chicken, Chinese sausage, and mushrooms. The rice was a bit dry and I didn't truly enjoy this dish as much as I thought I would.


We skipped the cheese course as we were too full, but we always have room for dessert! :) I ordered the black forest pudding with vanilla ice cream. The pudding was very "spongey" - the texture was a bit different from what I expected.


Dan was being good and only ordered the fruit plate for dessert. :)


Each of us then were served various pralines. Yum!


The flight attendant asked whether I wanted to have my bed made while I change to my pajamas, and I said sure! I went in to change and it was actually really nice to wear something comfortable to sleep in. Service was definitely exceptional - upon returning from the bathroom, the flight attendant asked for my regular clothes so she can hang them for me. I slept for a good 6-7 hours and woke up really thirsty. I asked for the Hong Kong milk tea and the egg tarts to enjoy while I'm watching some movies. :)


And then it was time for breakfast. We decided to eat separately this time so we could continue watching movies. :)


Instead of serving a choice of pastries, I was actually given a whole basket filled with muffins and croissants. They were also served warm which made the pastries tasted even better.


The fruit plate was served next.


I read that the scrambled eggs are scrambled on board the plane fresh, so I had to try it! It was really good and fluffy!

After breakfast, we changed back to our regular clothes and we really tried to soak in our last hour in first class. This was truly a very memorable flight!!

Definitely the best flight experience of our lives! We've never been on any other first class flight (other than domestic flights which don't really count). Service was amazingly attentive. Food was really, really good for airline food. The ability to dine together was just really cool - and the amount of space that we had was amazing. It really made the flight feel so much shorter, and this was probably the first flight where I wouldn't have minded if the flight was actually longer. :)

Next Post: Trip Summary
Posted by Marcela at 1:02 PM