We had an extra night in Bali and my mom recommended us to stay in the Ubud area for a change of scenery. Unlike Kuta/Nusa Dua/Seminyak areas which are mostly beach resorts, Ubud is located inland and is known for the beautiful rice paddies and artistic villages.

I usually handle all the hotel bookings for my family. However, sometimes accommodations in Bali give preferential rates for bookings made in Indonesia for local residents, so I had my mom do the booking for us. She booked a 2 bedroom villa at Luwak Villas in Ubud, which I thought was confirmed.

When we got to Luwak Villas after a 1+ hour car journey from Pecatu, we were ready to check in. However, the receptionist couldn't find my mom's reservation. Turned out she never got a confirmation from the villa, she only had proof of her bank transfer payment. Since it was a Sunday afternoon, the corporate office was closed, so they could not confirm or investigate further. The receptionist suggested that we stay at Ubud Green Villas down the street and assured us that they will refund the payment. I briefly checked the TripAdvisor review on Ubud Green and it looked quite promising. We also asked if we could do a site tour before we decided, and it was actually quite nice. We asked them to grab our bags and were so relieved to finally have a place to stay for the night. 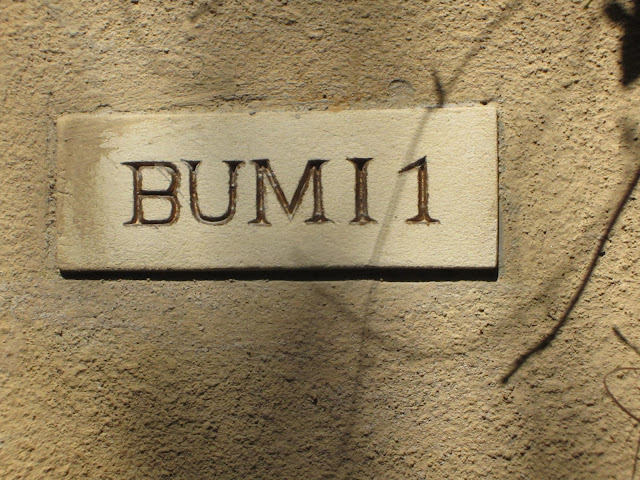 We stayed in a 2 bedroom villa called Bumi 1. Each villa had its own gate/door, which led to this stoned walkway. 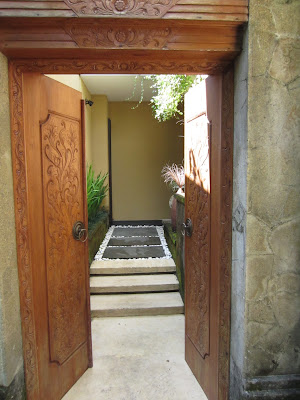 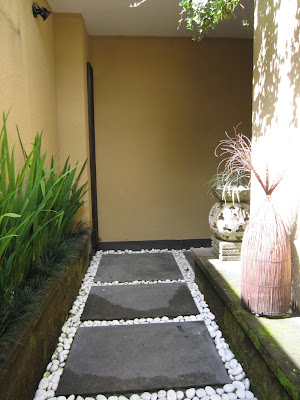 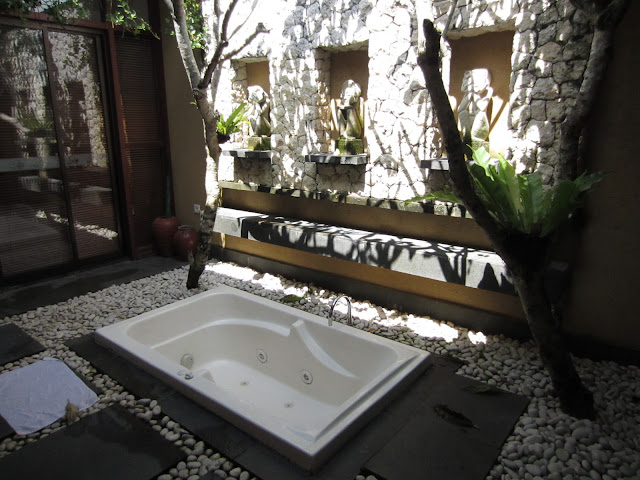 My parents stayed in the Master bedroom, which was a good size and minimally decorated. 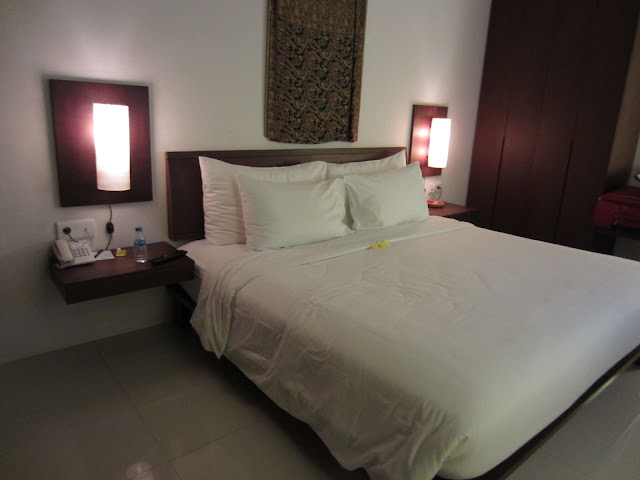 The bathroom included both bathtub and a glass stand-up shower. They provided two free water bottles which was nice.  The bathroom was still in good condition, probably since the villa itself was still quite new.


Dan & I stayed in the 2nd bedroom, which had a tiny twin-size bed, but we somehow managed. I think this was really meant for 1 person...hehe 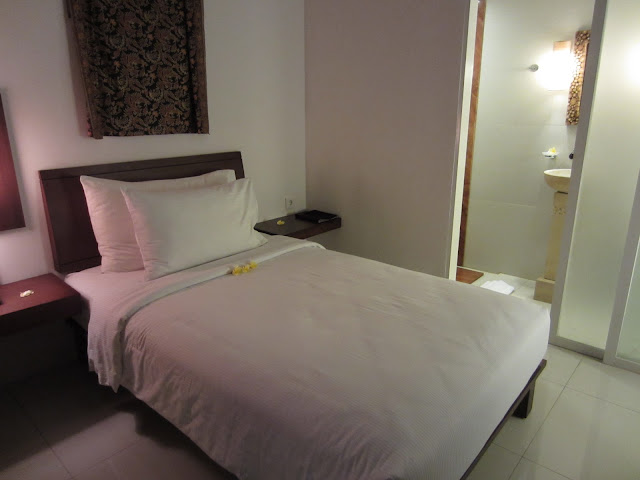 The attached bathroom was smaller in size compared to the master. There's only a shower (no tub) and a sink. What was a bit interesting was that there was no counter space, so it was a bit of a hassle since I had to keep going back to the bedroom to grab toiletries and stuff.


There was a pretty big "kitchen" area in the living room which was nice. 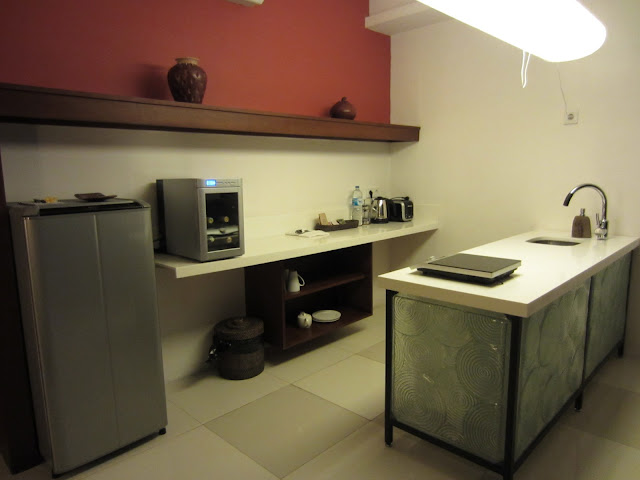 It rained while we stayed there, otherwise we would have taken advantage of our private pool with views overlooking the rice field. 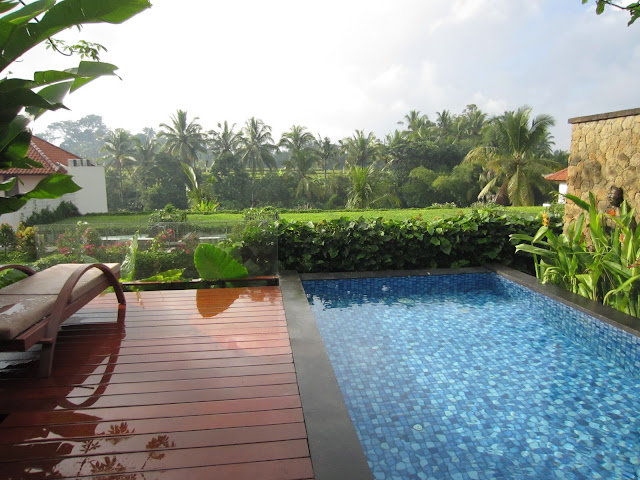 The rate included breakfast which could either be room service or at the restaurant. Since it rained that morning, we asked for room service, so they came and prepared the breakfast for us in our villa. 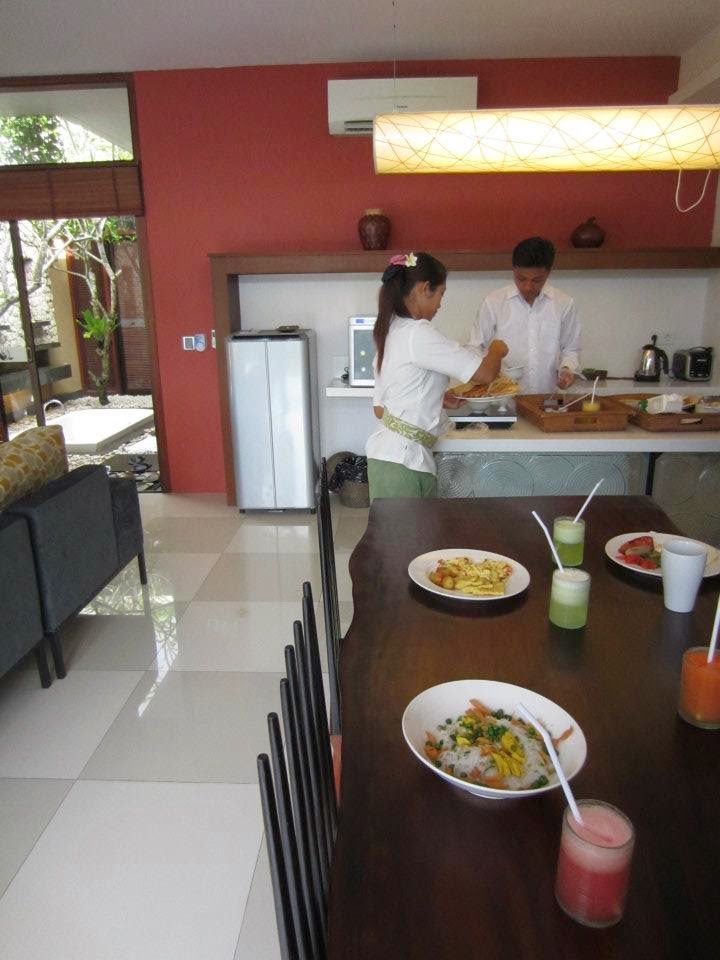 The rate also included daily afternoon tea at the restaurant, as well as a 15 minute massage per person. My parents said I could use their time allotment for the massage, so I ended up getting a 45 minute massage! :)

They also provided transportation to downtown Ubud for a nominal fee of $3 per car, which we thought was very reasonable.

All in all we were quite happy with the villa. It was still pretty new so still felt somewhat fresh and clean. With most properties in Indonesia, maintenance could usually be an issue, so it's always good to find newer accommodations. We had to take off our shoes when we entered the living area (which is customary in Indonesian houses). The "included" amenities such as free massage, afternoon tea, and breakfast was a nice touch. The villa wasn't overly luxurious but was still quite nice. One thing my family said was to let me do the bookings next time. :)

Next Post: Food in Bali
Posted by Marcela at 7:43 PM