We arrived in Munich on time, and after passing security & passport control, we headed to our gate. We were actually looking forward to taking a shower to refresh after the flight from South Africa. We noticed that there's actually a separate business and first class lounge for EVERY gate. So it was not a centralized lounge like we were used too. At first I thought it was a bit of a waste to put so much resource and space for each gate, however it was probably necessary for our A380 plane since the business class took up the whole second floor of the aircraft. 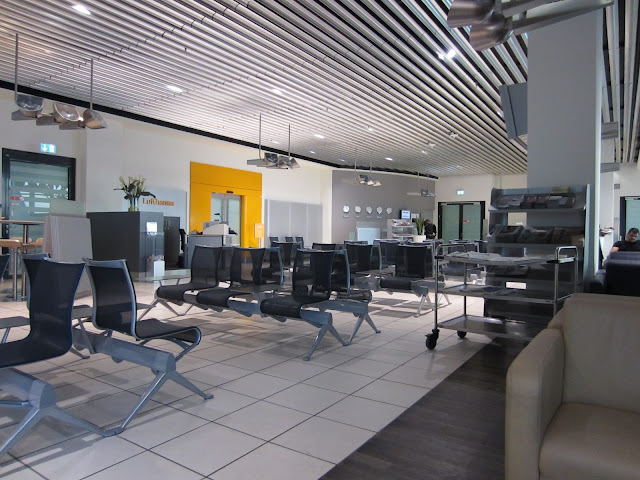 We had about 3 hours to kill, and we were disappointed to find out that there was no showers available at the gate lounge. There's only toilets. But oh well. There were choices of soft drinks, tea, water, wine, beer (of course), fruits, sandwiches, yogurt, and fruit. 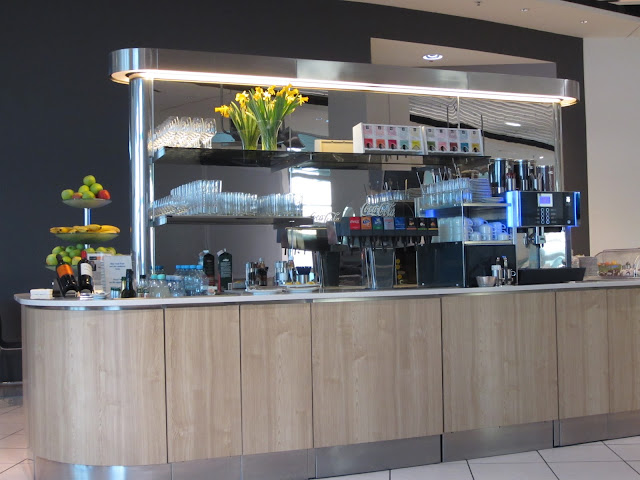 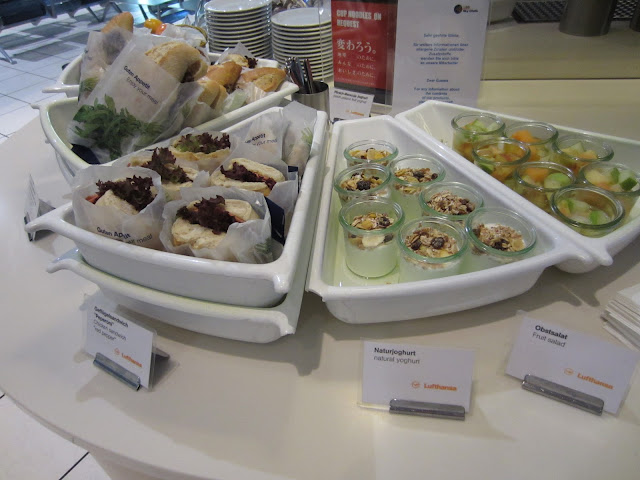 After some snacks and just hanging around, boarding started, and it was nice to be able to board directly to our A380. We saw how big the plane was; it was quite impressive. It looked like the whole upper section was dedicated for business class passengers. And even though we were on the upper floor, since we boarded directly from the gate, we didn't take the stairs on the airplane, so in a way it didn't quite feel like we were on the second floor. We were seated in 11 A & C which was the second row. The seat configuration was 2-2-2. 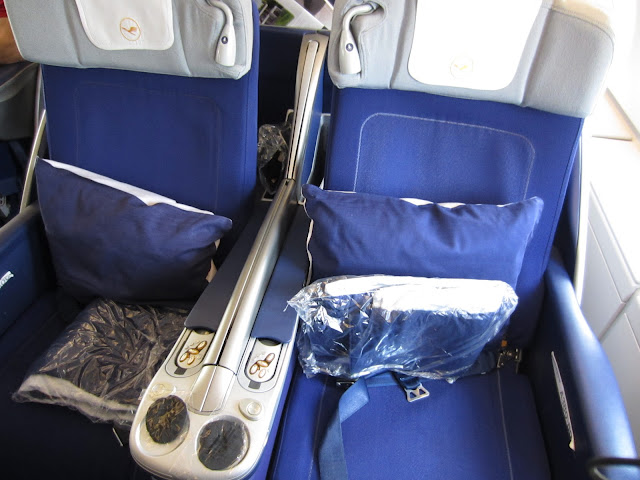 The seats were very similar to our first leg from San Francisco to Munich. It did feel even newer. The only negative was that the monitor was fixed, and we could only move it slightly up/down but not around. 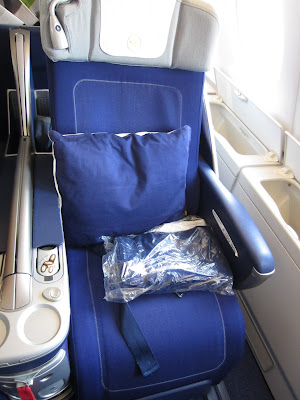 One of the unique things we noticed was an extra storage space below the window which was the smartest thing! Usually I had to stow my handbag in the overhead bin, and it could be quite a hassle. Now, I could just put my handbag inside the storage space right next to me. Loved it!


As usual, I got the orange juice and Dan got the champagne. 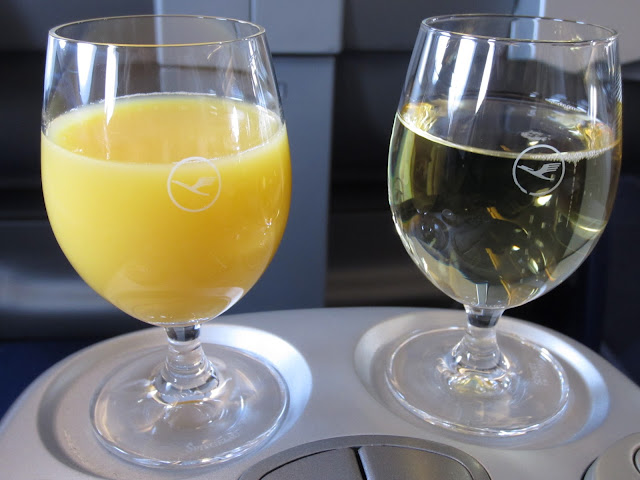 Here's a shot of the menu. Since this was a morning flight, the food service was lunch and then a light snack. 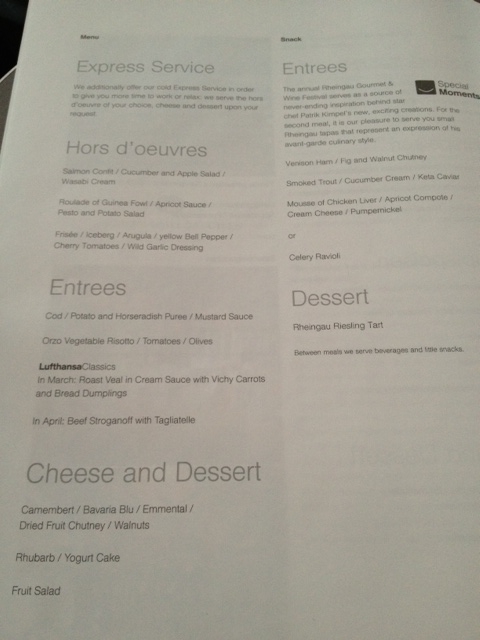 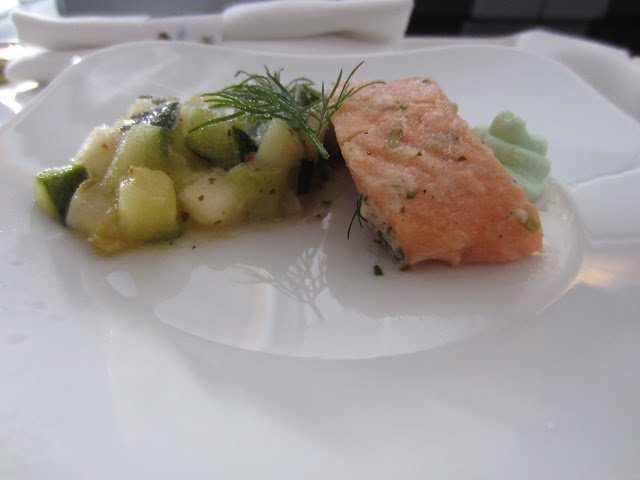 Dan got the Roulade of Guinea fowl, and similar as mine, it was still semi frozen. We also got a pretzel bread each. 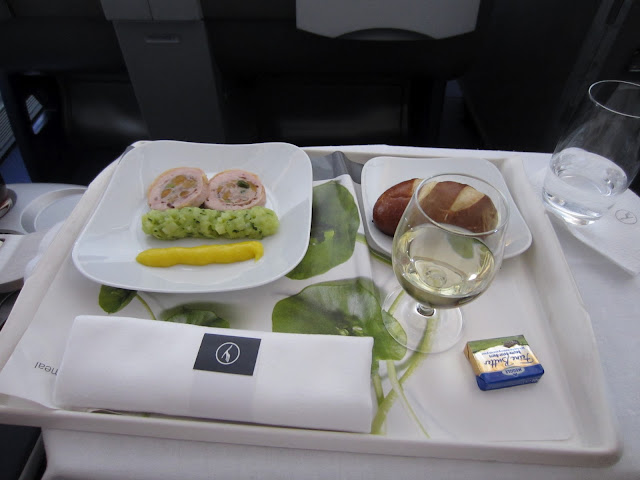 For the entree I got the orzo vegetable risotto, and it was actually quite tasty. I liked how it was cooked, and the sauce was just enough tomato sauce and slight saltiness from the olives. It was nicely done. 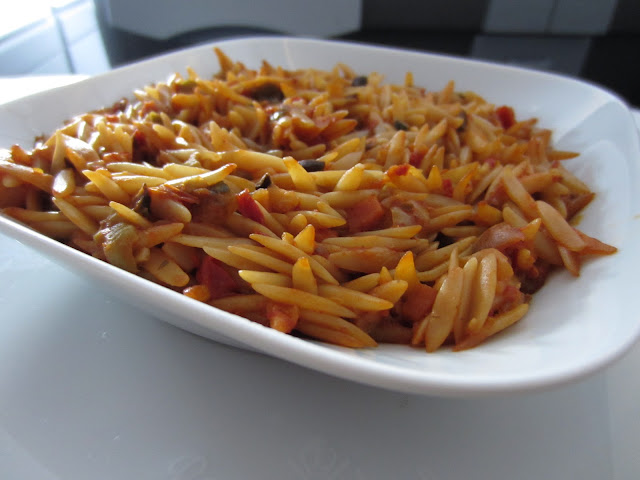 Dan got the cod with potato. It was ok, but it really reminded me of a microwave dinner. 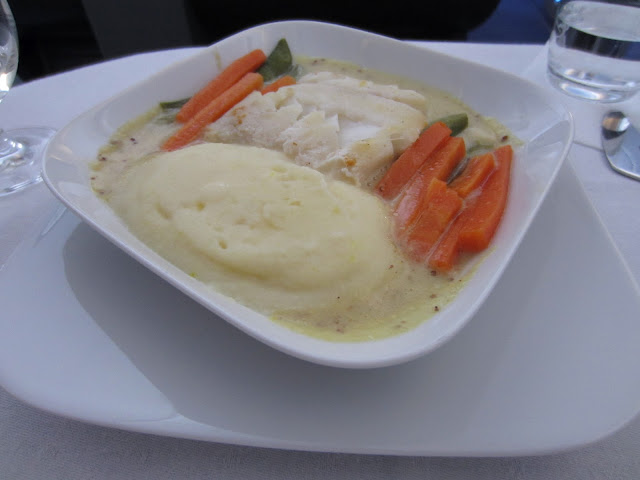 For dessert we got the rhubarb/yogurt cake which was not bad. The mousse was light and not overly sweet. 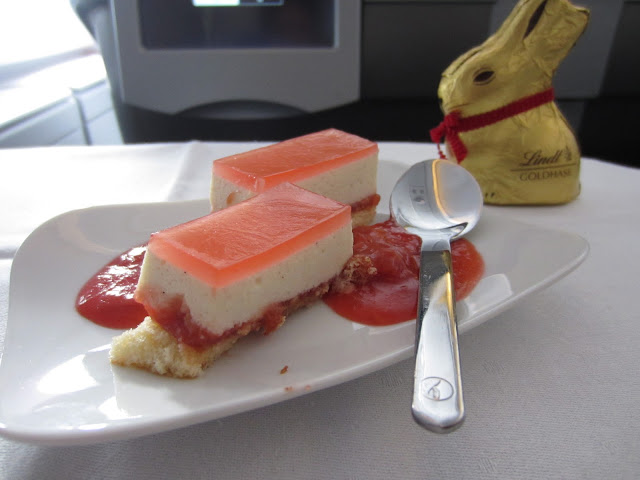 Since it was Easter weekend, we got a chocolate Easter bunny!

We watched a couple movies, took a nap, and then woke up for our snack before landing. I got the celery ravioli and another pretzel bread. The tray also came with the riesling tart. The celery ravioli was not bad, but the tart was a bit disappointing. 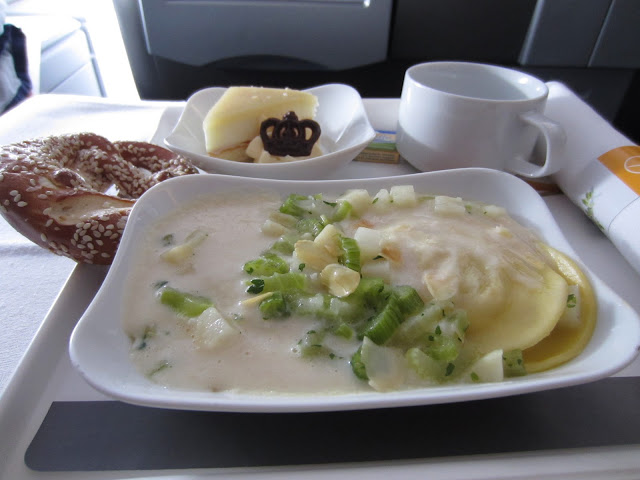 Dan got the 3 small snacks which were:

Hmm, originally we thought that it would be a choice of one of the 3 snacks, but it actually came as a set of 3. When we saw how small it was, it made sense why it was served that way. We were not a fan of these 3 dishes. Everything felt a bit confused, and the taste was just too different for us. It was nice to be able to try Lufthansa's business class product on the new Airbus A380. The seat was quite spacious, and the cabin was pretty quiet the whole time. It helped that the headphones provided were noise cancelling (or at least semi noise cancelling). Service was good and not abrasive. Even though the seat was not fully flat, we didn't mind it. The only minor complaint was that the monitor was not very adjustable so sometimes it's a bit hard to watch shows or movies. Other than that, we really enjoyed our long haul trip in Lufthansa's business class.

Next Post: Trip Summary
Posted by Marcela at 8:48 AM