I was looking forward to my trip back home...although I felt bad leaving Dan for 2 weeks. To compensate for my guilt, I did cook him a bunch of food that I froze, so he won't starve while I was away. :)

For the first leg from San Francisco to Seoul, I was on United. This would be the first time trying their business class, and I was excited to try it. Dan dropped me off at the airport 2 hours before boarding. I spent just a quick 30 mins at the Star Alliance Business Class lounge which was the same one when we took Lufthansa to Munich last month. Boarding started on time and I had preselected an aisle seat on the 2nd floor. When I was about to go upstairs, I was notified by the flight attendant that the luggage compartment for the seats upstairs were broken so I had to store my luggage at one of the lower seats' compartment. He showed me an area where I could store my carry on luggage and then I proceeded upstairs.


There were only a small number of seats upstairs, and I actually really preferred the upstairs area as it was a lot more quiet. I also noticed that some of the seats were backward facing which was interesting. There was plenty of legroom, and the seats were in good condition. It was a bit awkward to be traveling alone since usually I always sit next to Dan. Not to mention my neighbor must have thought I was strange for taking pictures of everything!


The menu was distributed as well as drink and warm nuts. I quite like the warm nuts, and the wine was very mild which I liked too!


The salad with mozzarella cheese was surprisingly good. The cheese was so soft it reminded me of my favorite burrata cheese! The bread was also served warm with butter. However, the spring roll was a total disappointment. It probably had been seating in the freezer for a while since the wrapper was rock hard and did not taste like a spring roll at all. :(


Service on this flight was exceptional. I am used to mediocre service on US based carriers, but the stewardess on this flight was amazing. I think her name was Gloria. For the main entree, I had the beef dish which was so so. I only had a couple bites to eat since I wasn't that hungry.


I was really looking forward to having the ice cream sundae until I realized it was not a sundae, but just a strawberry ice cream scoop in a chocolate shell. :(  It was still pretty good nonetheless. 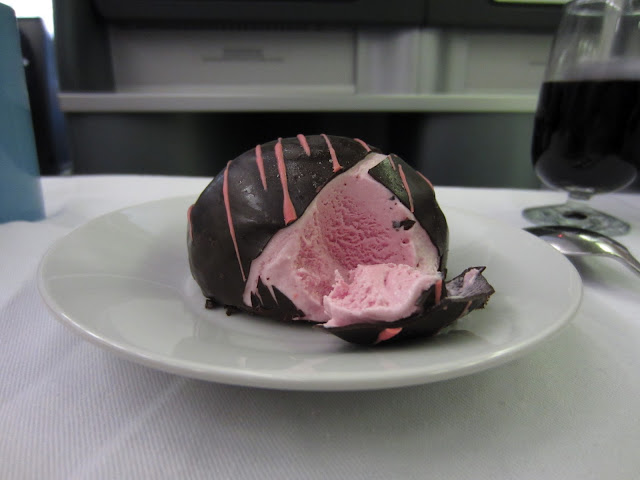 Breakfast was served about 1.5 hours before landing. I had the fruit plate with yogurt and croissant. I loved how the croissant was served warm, and it was quite tasty! 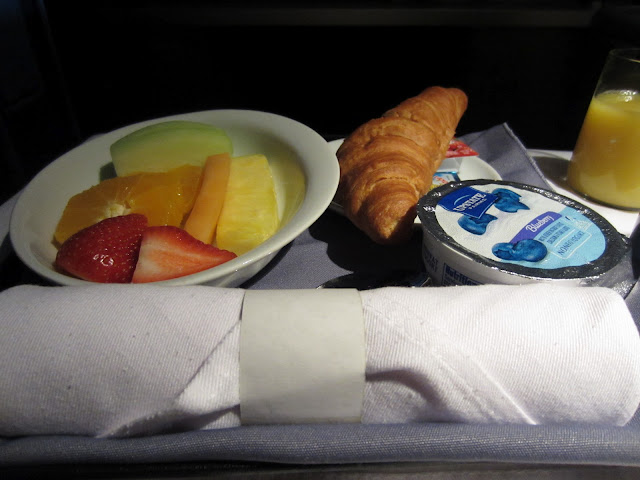 Overall I enjoyed the United flight. I really liked the 2nd floor as it felt a lot more private and very quiet. The seats were pretty new and clean, and it did lay flat. The service was surprisingly good on this flight, and the one thing that they could improve was food quality.

Next Post: Seoul - Singapore
Posted by Marcela at 4:32 PM