The day was finally here! We felt very blessed and were so excited to be able to take this trip! One of the things that Dan was really looking forward to about our trip actually was our flight. That's because we're flying in business class. We usually only travel in economy (although 1-2 times we have been upgraded to business class by chance), but we never paid out of pocket for business class fare. As I mentioned previously, we have been collecting miles/points and had enough to redeem two international business class tickets, and what better way to use it than for our South Africa trip since it's such a long journey.

We got to the airport two hours before our flight. Check in was easy (no line!) and we also got access to the business class lounge. It was for all Star Alliance airlines, so it was quite packed, and a bit old...nothing spectacular.


There were free snacks: fruit, yogurt, cheese, crackers, juices and soda. Dan helped himself to some and I got a cup of grape juice (my favorite kind of juice)!


We hung out in the lounge for one hour before we made our way to the gate. It was nice to board early and not have to fight for overhead luggage space. We were seated in seats 3A and 3B, which was the first row of business class. Our section was actually full. I believe every single seat was taken. 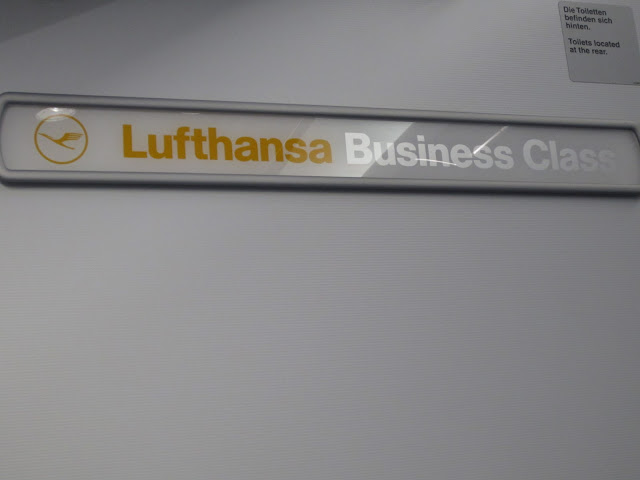 Dan and I were amazed at how much space we had. There was also a section underneath the monitor screen in front of us to store smaller items.


The seats seemed to be in good condition, and even had a massage button (although it was very weak). We were welcomed by champagne, which we took advantage of, and we toasted the start of our vacation!


Dinner service started soon after. We got real silverware, glass cups, as well as tablecloth which was nice. First round was drinks and pretzel snacks. The stewardess then came back to get our dinner order. We had a choice of an appetizer and an entree. I also started to watch "The Descendants" which turned out to be an excellent movie.


Dan chose the chicken edamame salad, and I got the ahi tuna salad for appetizer. The chicken edamame was actually quite good; it was in a creamy curry sauce - it was refreshing. They also served various warm bread which was really good.


My ahi tuna salad was quite good as well...I liked the creamy dressing that came with the salad. For the bread, I chose the pretzel bread which was good. Both appetizers had a slight Asian touch and they were quite nice.


For our main course, I got the miso cod with soba noodle and Dan got the gnocchi with tomato cream sauce. The miso cod was not bad, however I was not used to eating warm soba noodles. They are usually almost always served cold, so it tasted more like a hot pasta to me....it was not bad but I was too full at this point.


The gnocchi was also different; we're used to gnocchi shaped into small pasta balls/pieces. This one was just one big "cake", and it tasted more like polenta, served with vegetables.


For dessert Dan got the fruit plate--is that even considered dessert? And I got the more calorie heavy cheesecake.  :) The cheesecake was surprisingly good, and just the right amount.


After dinner, it was past midnight SF time so we were ready to sleep. We put our seats in sleeping position. It wasn't quite flat, but it was close.  :p We slept pretty well for about 4-5 hours.

Breakfast was served around two hours before landing. I ordered the egg breakfast plate, and Dan ordered the continental breakfast. The stewardess also offered breads, muffins, and croissants. The croissants were yummy and warm!


We arrived in Munich feeling somewhat more rested than usual. It was definitely a nice step up from economy. For long travel, being in a premium class made the experience less tiring, although it still was a long flight. There were less time spent in lines, more spacious legroom and seat (plus not having to worry when the person in front of you reclined). Food was better and felt more like a regular meal rather than a pre-packaged microwave dinner. One thing that wasn't as nice was the restroom. They were the exact same tiny size as the restroom in economy. There seemed to always be a line, although with less people.

After we got our luggage, we met up with Dan's cousin who was actually in Germany for quick drinks at the airport before heading out to our hotel. I looked into a private transfer from the airport to our hotel, but it's quite expensive (60-70 euros) so we took the train instead. The train ticket was 20 Euro for a two person day pass. We took the S8 train to Johanneskirchen station and when we arrived, we were so worried because the station was super small and really dark. We were worried that there wouldn't be any taxis around, and there was no pay phone or anything. Thankfully, we saw one taxi parked in the parking lot, and I was so relieved when he said he was available! Thank God! It was a 10 minute drive to our hotel and cost 12 euros.

Next Post: Sheraton Munich Arabellapark
Posted by Marcela at 4:22 PM