For our first night, we didn't feel like going out to the city center for dinner, so ended up going downstairs to grab a bite to eat at the Arabella bar in the hotel. Dan got a beer, and we shared the veal sausage with pretzel.

The veal sausage was soft and somewhat sweet, probably because we were used to very salty sausages in the US. Oh, and you're not supposed to eat the skin apparently. Our waiter told us how to eat it properly after seeing we just ate the sausage with the skin like we normally do. :)

The pretzel was probably the best we have had, very soft and warm, though a bit salty. The mustard sauce that came with it was also different from regular American mustard. It was a more like honey mustard, a bit on the sweeter side, but paired well with the slightly salty pretzel. Our total bill was 14 euros, not a bad price for hotel food!

The Germans do know how to make pretzels. After our yummy pretzel the previous night at our hotel, we grabbed a quick cheese pretzel from a random bakery in Hauptbahnhof (Central train station) the next morning, and it was SO GOOD! I wish they made cheese pretzels like this in the US!

I loved it so much that we got a 2nd one that day! And after that I always wanted cheese pretzel for breakfast while we were in Munich. Unfortunately, the best one was at this random place which I forgot the name of. :( I tried a couple cheese pretzels from other bakeries/cafes, but they were not as good.

While we were on our Munich Walking Tour, we were given a quick 15 minute snack break, and our guide suggested a quick bite at Vinzenzmurr. We got the schnitzel sandwich, and I've never seen a sandwich where the meat size was twice the size of the bread...haha. It was actually a really good sandwich. Simple but good. The bread was warm and toasty (which I like), and the schnitzel was cooked perfectly with a slight crunch.

It looked like Vinzenzmurr was quite a common fast food place as we saw them all over Munich. So if you are looking for a quick bite, we recommend this place.

After our Munich Walking Tour, we went to this place for lunch and beer. Dan & I both got the same beer (Augustiner) which was really good. I'm not much of a beer drinker but Munich beer is tasty!

Our tour guide explained that the city passed a law that Munich beers cannot contain chemical and had to be pure, and we could definitely taste it.

I originally wanted to order a Radler, which is 1/2 lemonade and 1/2 beer, but the waiter heard us wrong and just gave me the regular beer. But I did try the Radler at a different place, and it was good. They say it's a ladies drink though, not really for men. :p 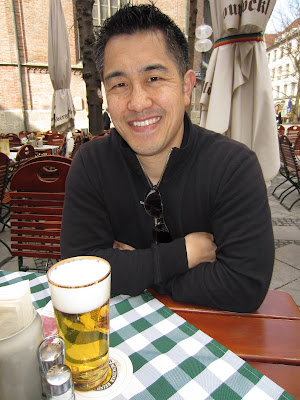 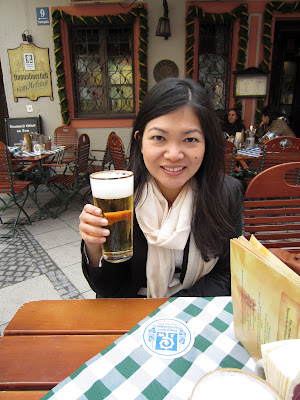 As we were quite tired of eating typical German food (sausages), we went to an Italian place for dinner called Brenner Grill. This place came highly recommended from someone on the Trip Advisor forum and the ratings appeared to be quite good. I made a reservation about a week before online.  The restaurant looked very trendy, and it was really full when we came on a weeknight. Reservations are recommended. Service was super slow though, but overall we would recommend this place.  The restaurant was located towards the back from the main street so it was a bit hard to find.


Dan ordered the calamari pasta, and I ordered the grilled salmon with pesto sauce. The pasta was cooked al dente with perfect calamaris and spicy tomato sauce. The salmon was also great and served with fresh pesto which was wonderful. It's probably the best pesto I have had outside of Italy.  Dan commented that this was his favorite meal on the trip so far.

My friend told me to visit Hotel Sacher and try the Sachertorte, which was supposed to be famous. It is basically a chocolate cake with thick chocolate icing and apricot marmalade jam. 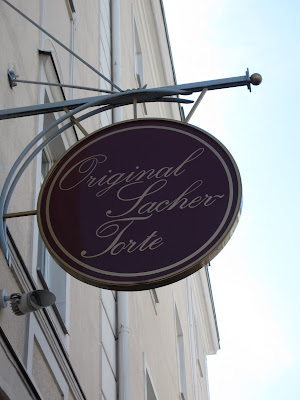 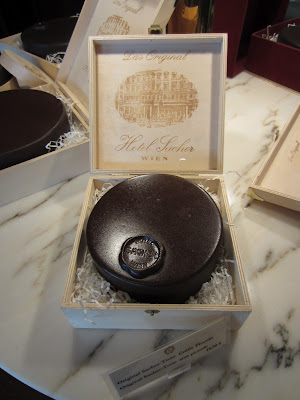 The story on how the cake was invented was quite interesting. Apparently the head chef at the restaurant was out sick and so the assistant chef had to come up with a recipe to entertain some important people who were coming to the hotel, and the cake became a huge hit, and the rest is history.

The hotel's decor was very traditional and a bit old style, but I guess that's part of the charm. 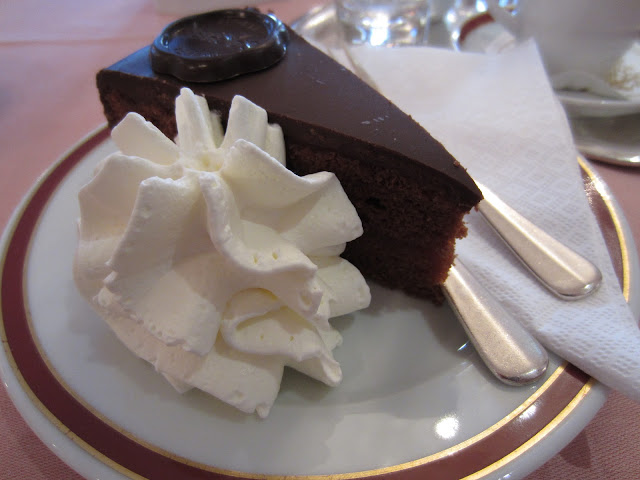 We shared a slice of cake, and we both thought it was just ok. The icing was very thick and sweet, and the cake was a bit on a dry side. But, we're glad we at least gave it a try. :)

This restaurant also came highly recommended for German food. Even though we were quite tired of German food at this point, we gave it a try anyway. 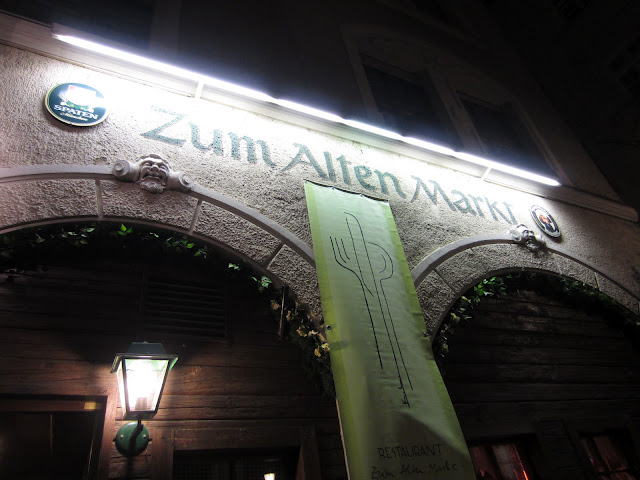 The restaurant was much smaller compared to Brenner Grill. It's nice and has a cozy, intimate atmosphere. Reservations were necessary, and I booked it online about a week before and the owner actually emailed me back to confirm, which was nice.

As soon as we got there, the owner immediately know who we were. I guess they probably don't get that many Asian customers? :p 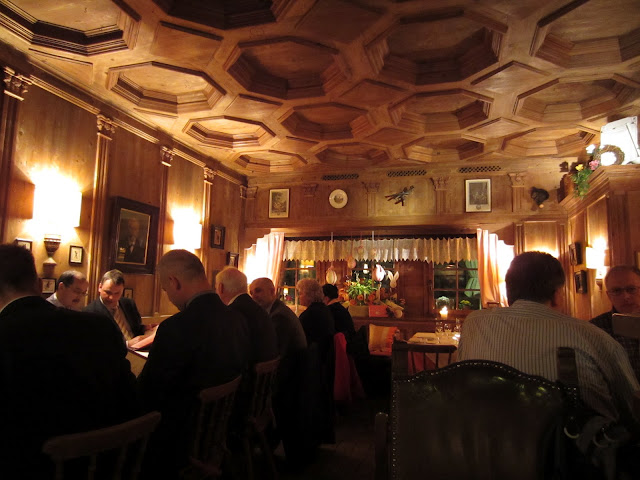 We were promptly seated and the restaurant was quite full at that point. Most of the patrons appeared to be businessmen. Actually, the table next to us were American businessmen.

Their menu appears to change seasonally. I ordered the mushroom and leek pie appetizer, which was actually quite big and definitely enough for an entree. The mushroom pie tasted like a quiche, creamy and delicious! 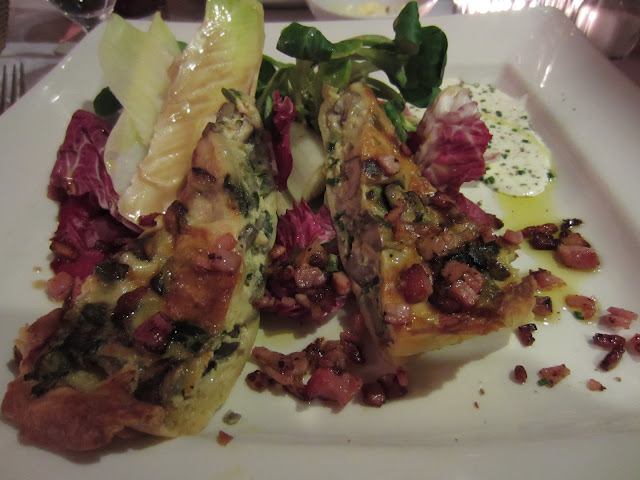 Dan got the pork with noodles. The pork was tender and the sauce was really good. I felt the pork was a bit undercooked, but still a good dish. Overall we enjoyed the food. When we were paying, the waitress asked us how we heard about the restaurant. Like I mentioned earlier, they probably don't get a lot of Asian tourists here it seems like. :) 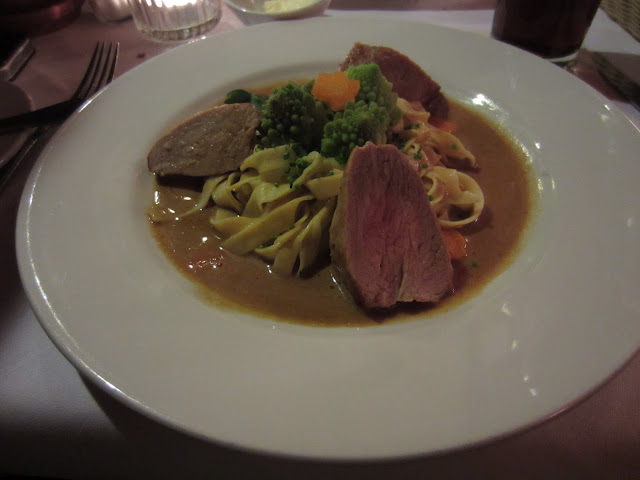 Looks like typical German food consist of beer, sausage, pretzel, schnitzel, and so on. :)
Our guide even told us that if you're vegetarian AND if you don't eat pork, you'll have a hard time finding something to eat in Munich.

Our highlight from Munich's food scene was definitely the yummy beer, the cheese pretzel, and the sandwich at Vinzenzmurr. We enjoyed dinner at Brenner Grill and Zum Alten Markt as well, and would recommend those places if you are visiting Munich.