We arrived at the Johannesburg OR Tambo Airport 2 hours before departure. We looked for the premier check in lane and noticed there was quite a line already. And the line was not moving! We were probably the 5th person in line, and we basically stood in the same spot for 30 minutes, and the check in line was getting longer and longer behind us. Some people started getting antsy but the staff was not helpful at all. I looked over at the Economy check in line, and that was even more outrageous. I overheard that the system was down so they were not able to check in any passengers for a while.

We saw some IT people walking over to the counters and had everyone reboot their system. Finally after around 40-50 minutes waiting the line started moving again! The person at the check in counter was not apologetic at all and didn't even acknowledge that we had waited for a long time. Oh well... The security line was also really, really long. There wasn't a separate security line for premium class passengers. We originally thought we would have time to go to the lounge, but apparently not. Dan was really hungry so we grabbed a quick sandwich after security and then boarding our plane. The seats/cabins looked very similar to our Munich-Johannesburg leg. The configuration was 2-2-2. I still can't get over the fact that we got 3 windows to ourselves and how much legroom there was. 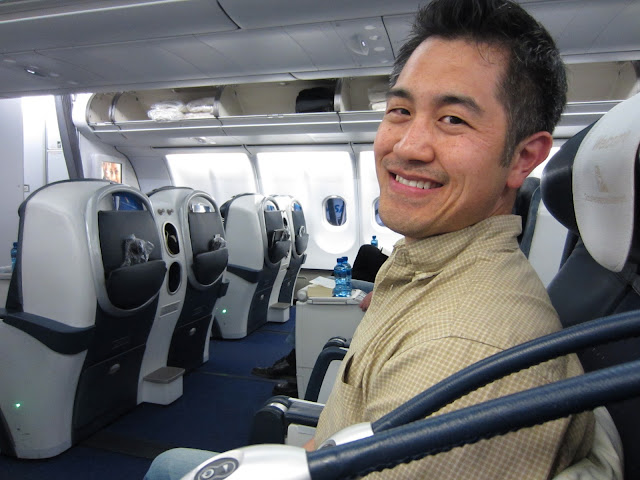 The stewardess came around to offer orange juice/champagne. Dan & I started a routine where I get the orange juice and he would get the champagne.  And then I would pour a little bit of his champagne into my juice to make a mimosa. :) 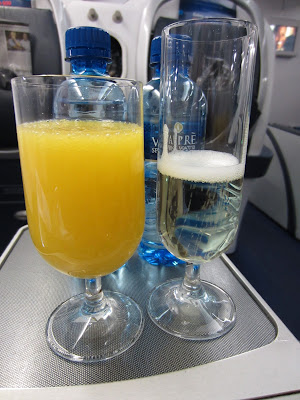 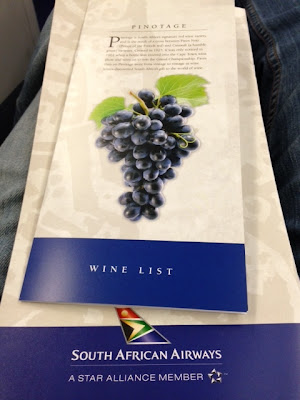 Our stewardess was very friendly. She addressed us by our last name which was a nice touch. I heard her address the people seating behind us also by name, so she must have really made an effort to memorize passengers' names.  The menu was then distributed. Interesting to note that there were a couple menu items by Reuben, who is a famous South African chef. We didn't get to try his restaurant in Cape Town and Franschhoek, but heard great things about them. 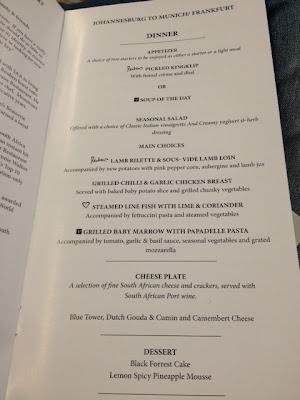 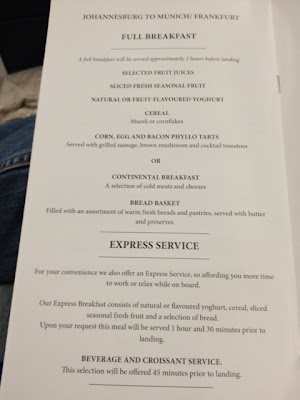 The one thing that they always did in business class was place a white table cloth before every meal, to make it a bit more "formal". And of course, all the glassware and plates were real (not plastic disposables). They started serving appetizers with drink orders. I of course got the grapetiser, which was my last for the trip. :( 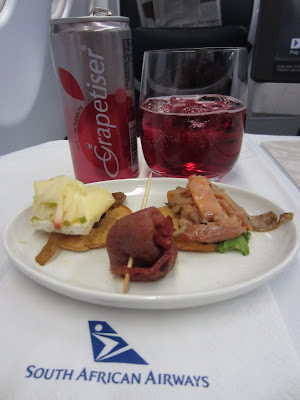 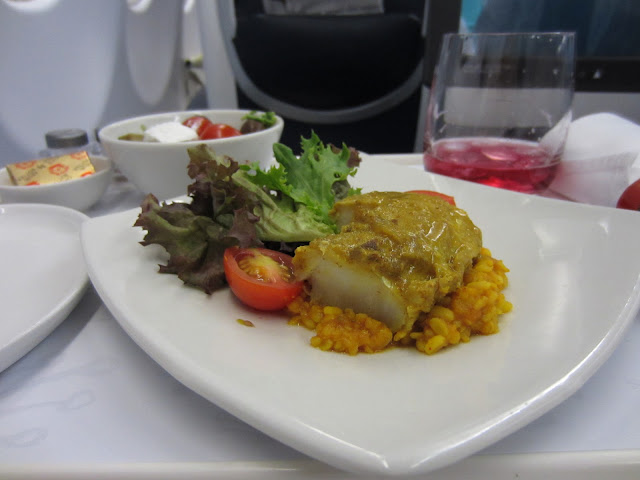 The mushroom soup was of course, creamy and delicious. I finished the whole bowl. :) 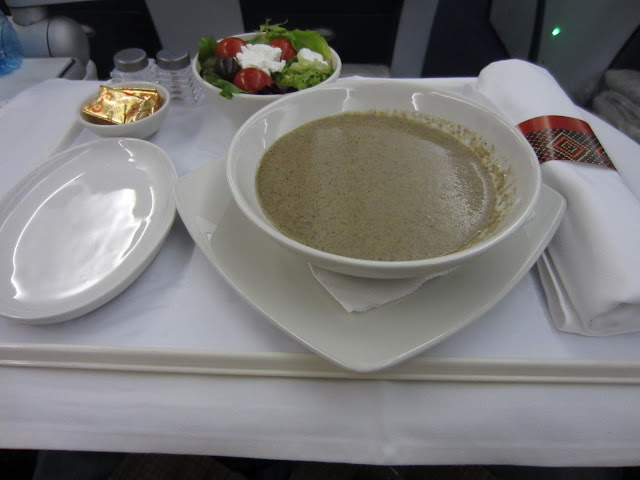 I got the steamed line fish, and Dan got Reuben's Lamb dish. 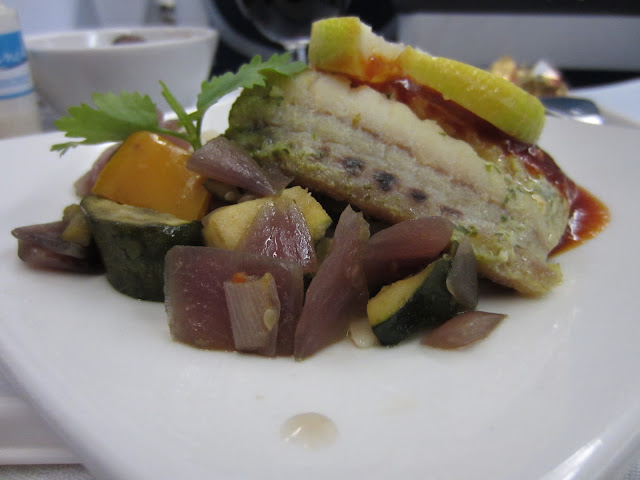 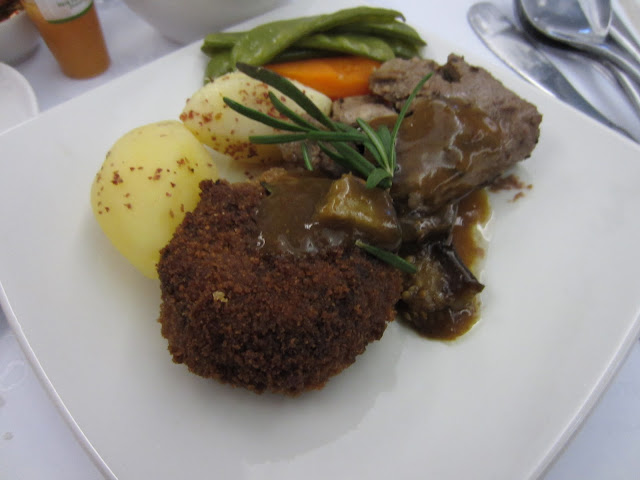 For dessert, I got the lemon spicy pineapple mousse. I was a bit afraid by the "spicy" description for this dessert dish, but I barely tasted any spice. It was actually pretty good and refreshing--very light and not overly sweet. Dan got the black forest cake. 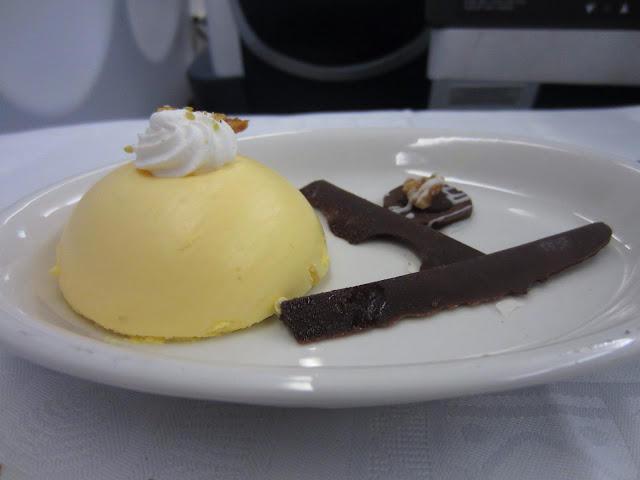 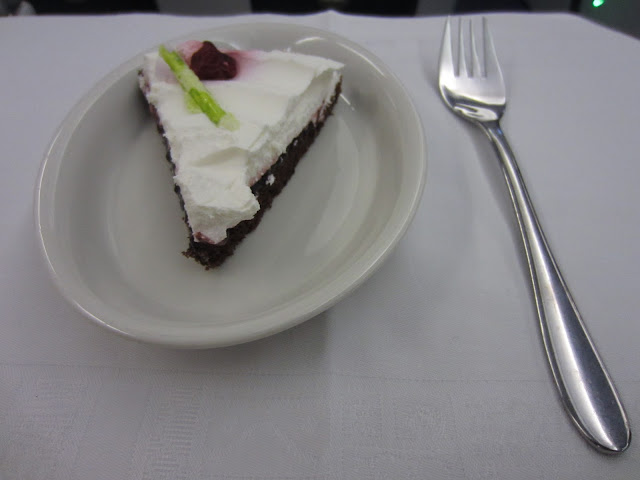 After dinner, pralines were distributed, and they were quite good. We ate them after we woke up in the morning after our nap. :) 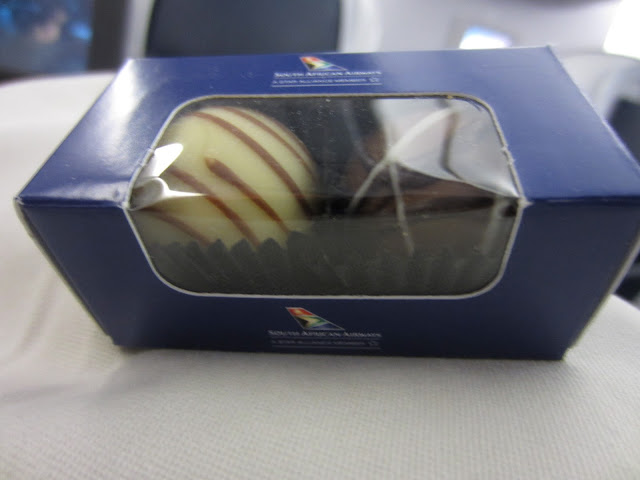 We put our seat into bed mode, put the mattress pad and blanket, and off we went. It's such a luxury to be able to have that much space on a long haul flight! 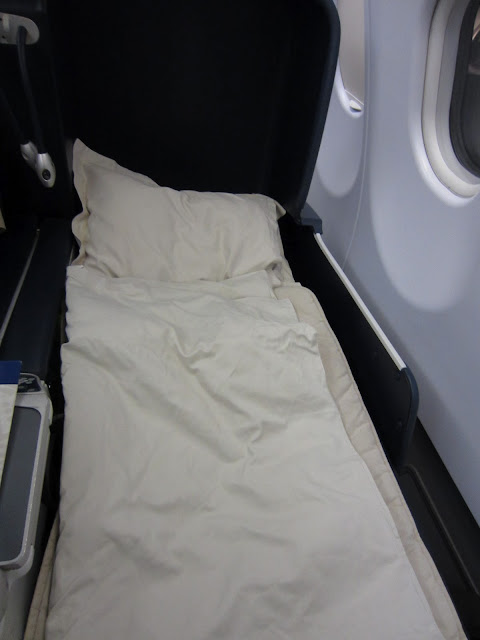 We got around 6-7 hours of sleep, watched some movies, and then had breakfast. We first got yogurt with muesli/cereal. After that we got a choice of hot or cold breakfast. Dan got the cold selection (fruit) and I got the hot breakfast. 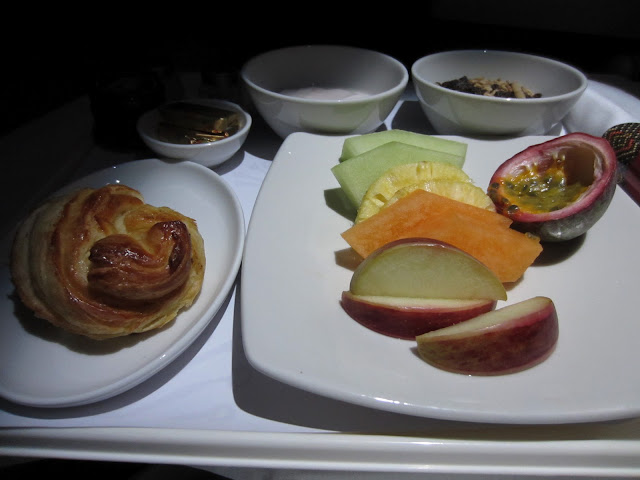 The egg was wrapped in a phyllo dough which was interesting. 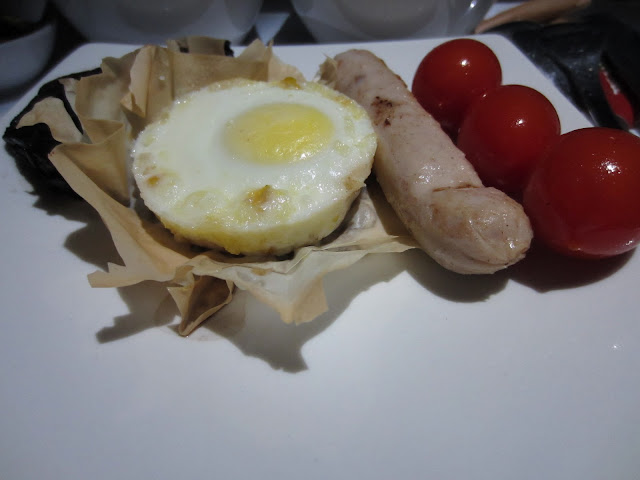 Next Post: Frankfurt - San Francisco
Posted by Marcela at 5:36 AM