This is a continuation of our Munich & South Africa trip. You can find the full trip itinerary here.
A lot of people recommend skipping Johannesburg altogether, that there's really not much to see and that the city was unsafe. We went back and forth whether to spend time here or not and finally decided to spend a one night layover here which would give us enough time to do an afternoon sightseeing trip.

We booked a half day tour with Alan Bilbrough from African Journey based on a recommendation on Trip Advisor. We were picked up around noon from our hotel in a clean Toyota Corolla stocked with bottled water. Alan was born and raised in South Africa. He mentioned that Johannesburg was one big metropolitan city not near any body of water, and the real reason why Johannesburg became such a big city was because of gold.

He drove us through several parts of town with the main destination being Soweto (South Western Township) - the biggest township in South Africa. He explained that the current city center for Johannesburg had moved to Sandton city, and now the original city center was somewhat abandoned. We went through several areas that looked pretty rough and then drove past the city center. The city center did look quite a bit rundown, and we only drove passed it.

We were then off to Soweto. This particular township was a bit different from other townships that we had seen when driving passed through Cape Town. It was actually not as run down and most of the houses were actually made of bricks. Here are some pictures of Soweto: 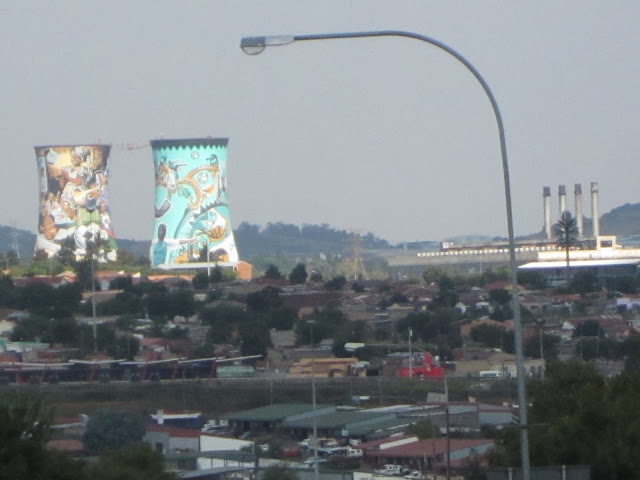 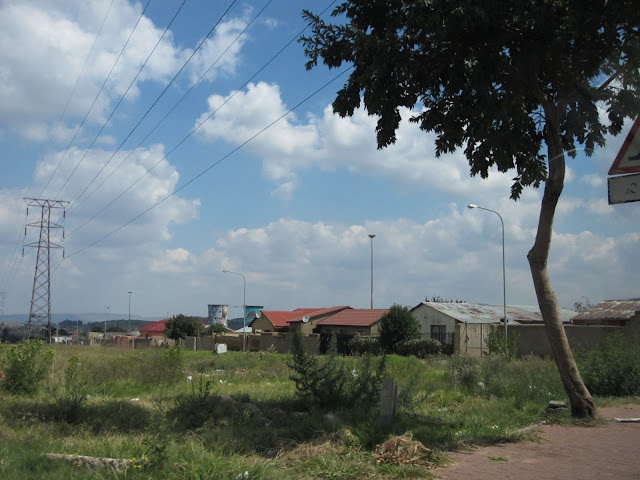 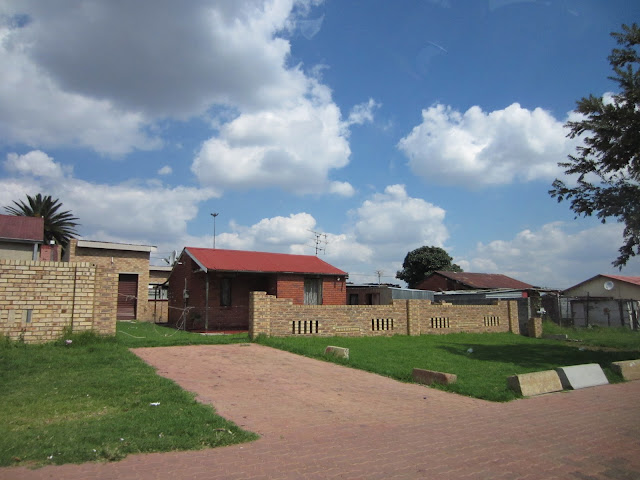 Alan explained that most of the houses used to be government housing during the apartheid era and owned by government, and after apartheid the government gave ownership to the people living in the houses. 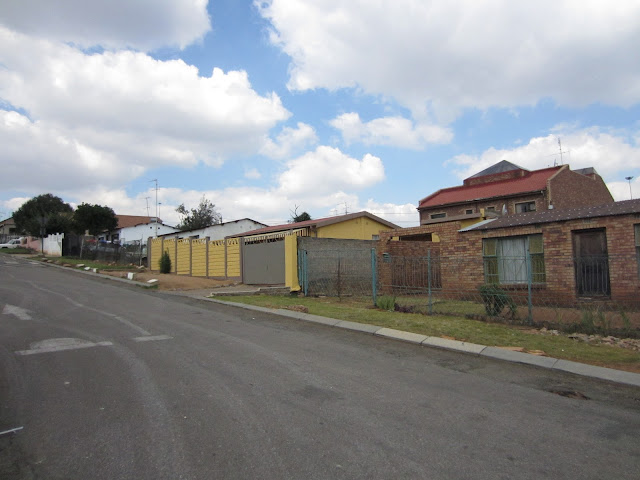 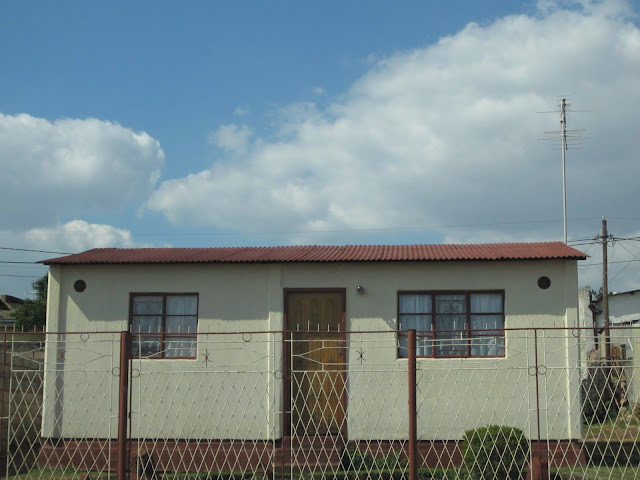 We stopped by Wandie's Place for lunch. Apparently this place is the place to go while in Soweto. We saw pictures of Bill Clinton, Richard Branson, and other celebrities posted on the wall. 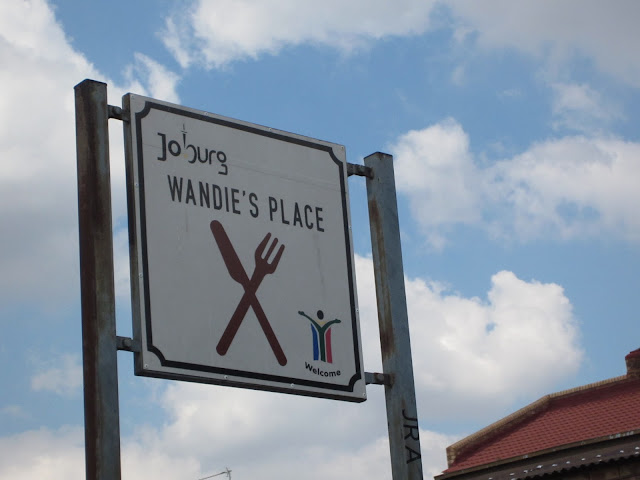 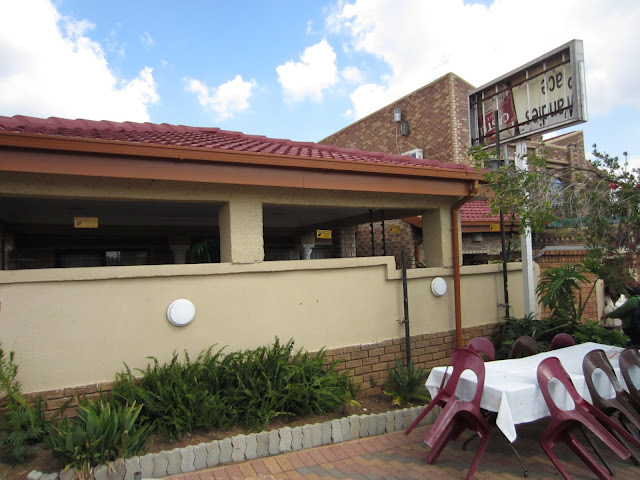 Pictures of famous people, business card, and random notes on the wall. 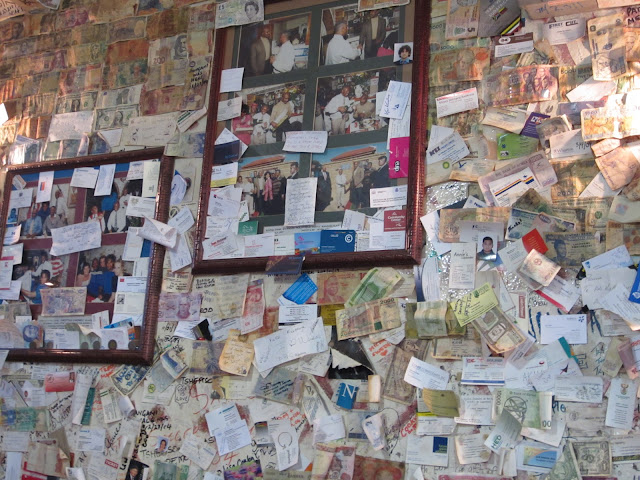 It wasn't too busy when we came and we were seated immediately. The food was buffet style. There were rice, beans, mashed potatoes, green beans, greens, curries, meat stews, etc. 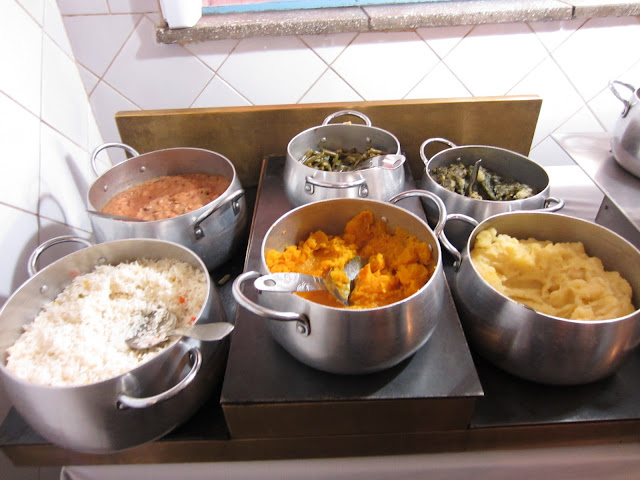 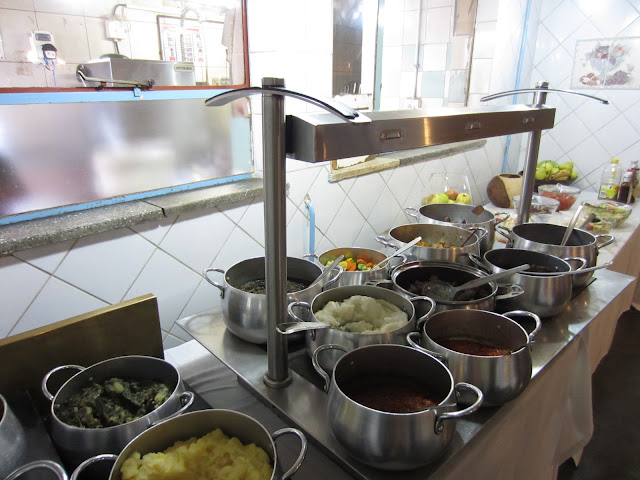 The food was actually pretty good and it was the closest to "African" food that we had during our trip. It reminded us somewhat of Indian food. Food was actually really good we both had a second serving. 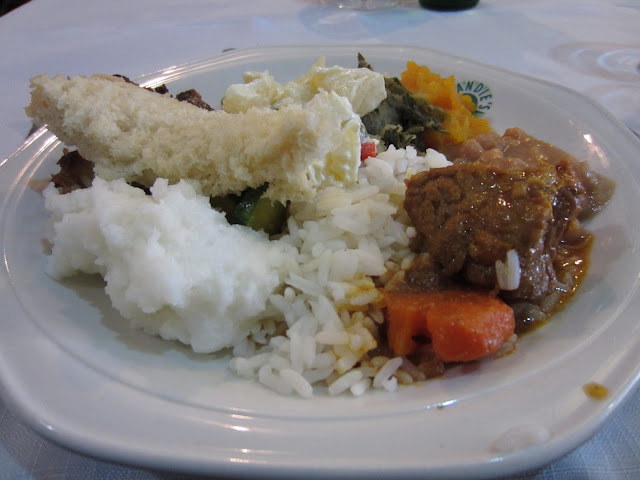 After lunch, we drove passed Mandela's old house that has now turned into a museum. We only saw it from the outside and didn't go in. 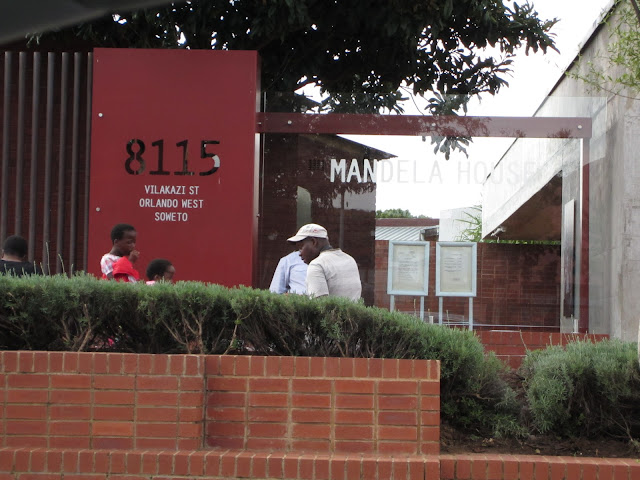 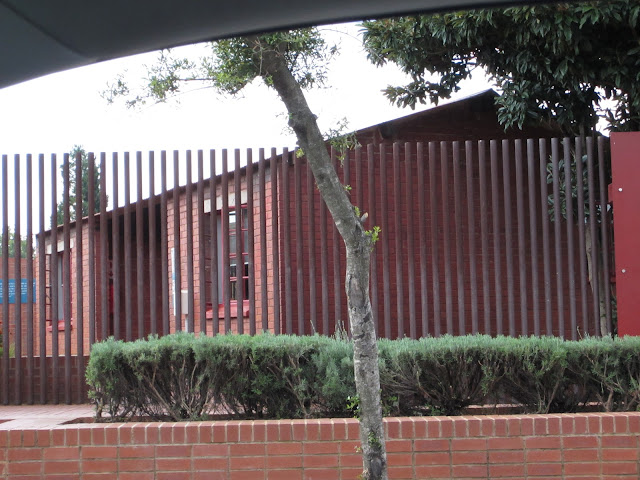 Our next stop was the Hector Pieterson museum. It was a very thought provoking visit. The museum provided some insight about what happened during the apartheid era and the Soweto uprising. You can read more about Hector Pieterson here on Wikipedia. 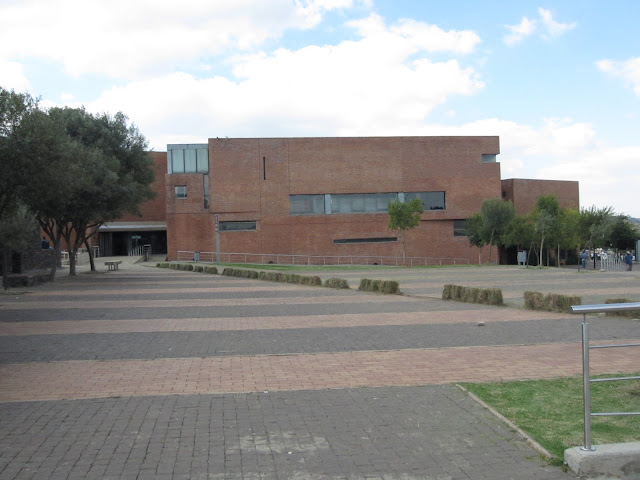 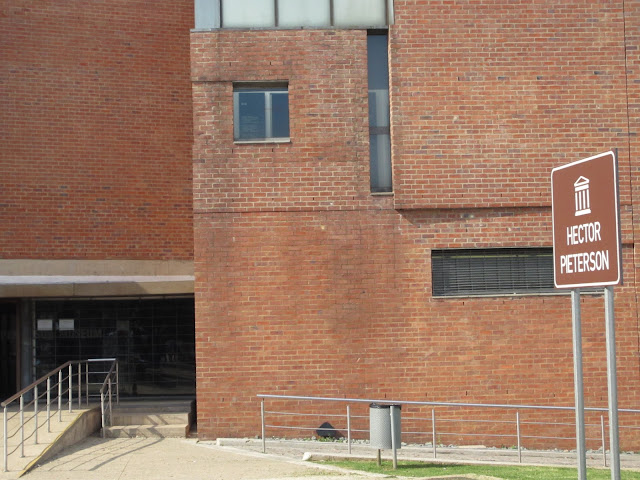 Our last stop was a township called Motsoaledi which is what we imagined when thinking of townships. There was a site guide that took us around--a local who lived in the township. Alan explained to us that the locals were the ones who came up with the idea of the tour as a way to make some money, and for most tourists, this part of the tour was usually the highlight. 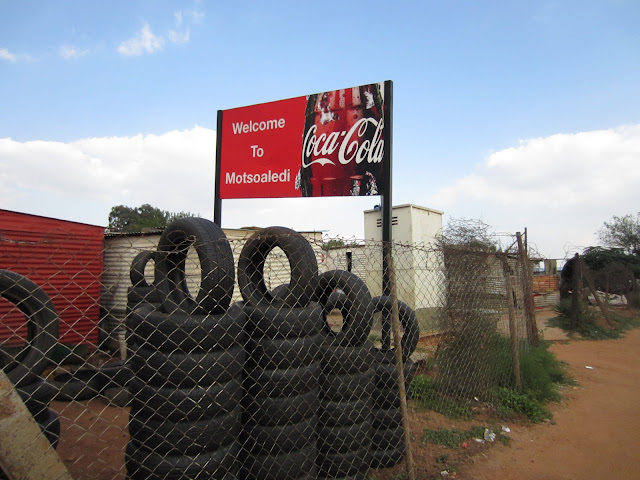 We only had 10 minutes since we had to go back to the airport to catch our flight, so we did our tour rather quickly. We made a visit to the daycare center and saw some kids. 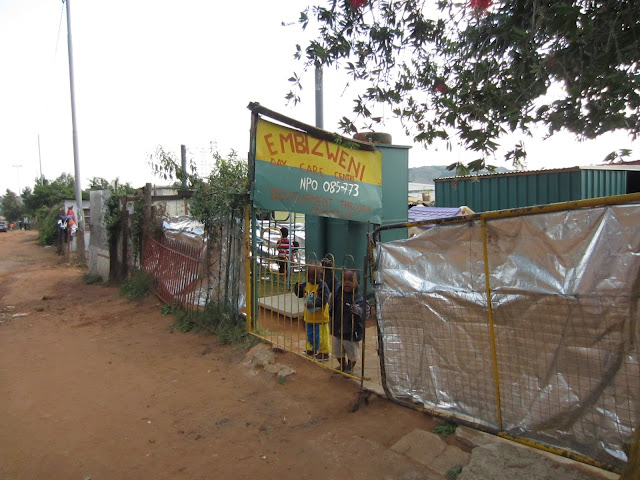 The kids appeared very excited to see us and were very friendly. 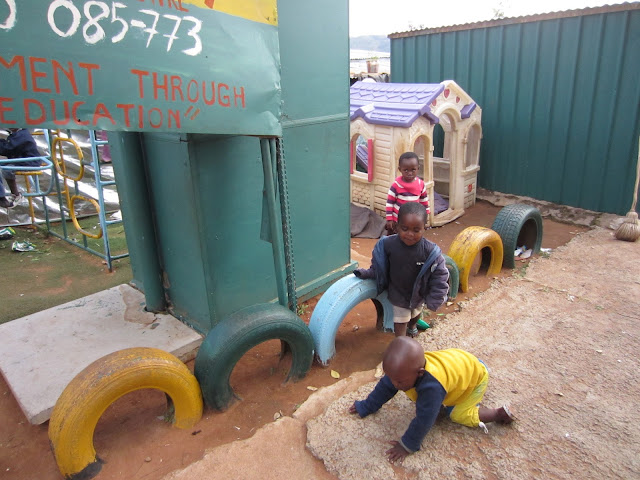 We got a brief tour of the classroom from the teacher. She said they take donations since they pretty much were self running. 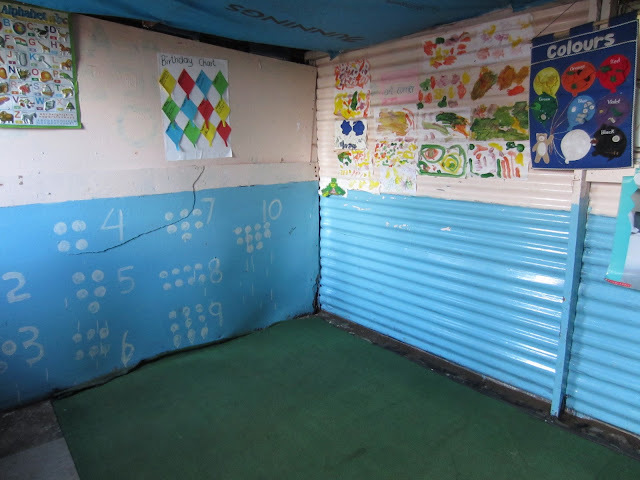 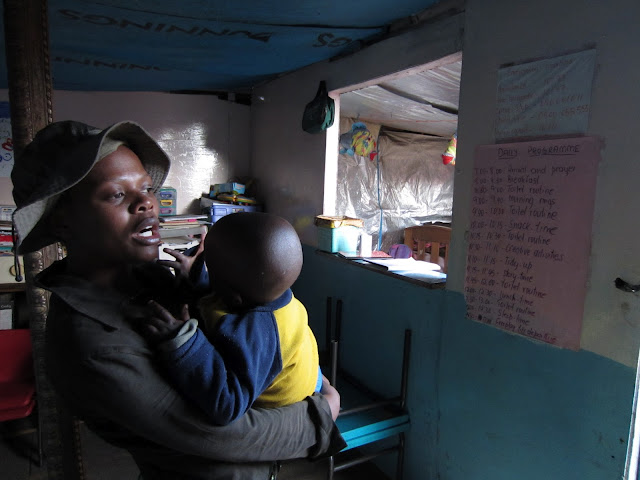 After our trip, we were taken to some makeshift souvenir stands in the dirt parking lot and felt somewhat pushed to buy something -- so we ended up buying one. Hopefully the money got put to good use. :)

We highly recommend our tour guide, Alan, who was so friendly and informative. If you do have a free time during your layover, it would not be a bad idea to do a tour of Johannesburg and Soweto. However, I don't think you need to make a special stop in Johannesburg if visiting South Africa. Though we didn't go to some of the "nicer" areas of town such as Sandton or Rosebank, so we can't speak to those.

Next Post: Johannesburg - Frankfurt
Posted by Marcela at 8:28 PM