For our first full day in Cape Town, we took the Red bus tour, and it turned out to be a great choice. There was a stop in front of our hotel which made it really convenient. Tickets cost 140 rand ($18) per person for a day pass, and I was pleasantly surprised to find that they actually took credit card on board. 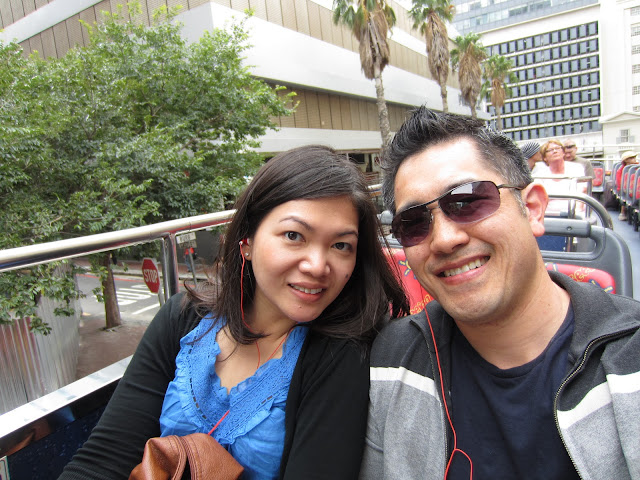 If the weather is nice, of course the preference is to sit up top since you get a better view of everything. We got free earphones and there were jacks along the side so we could listen to commentaries which was nice.

We drove around town, and made a stop at Table Mountain, and then continued on the drive to the beach area which was so beautiful! The beach area looked very nice and upscale, and the beaches were white sand...although there can be great white sharks in the area. :p We enjoyed the HOHO bus, and it was definitely a great way to see the city. 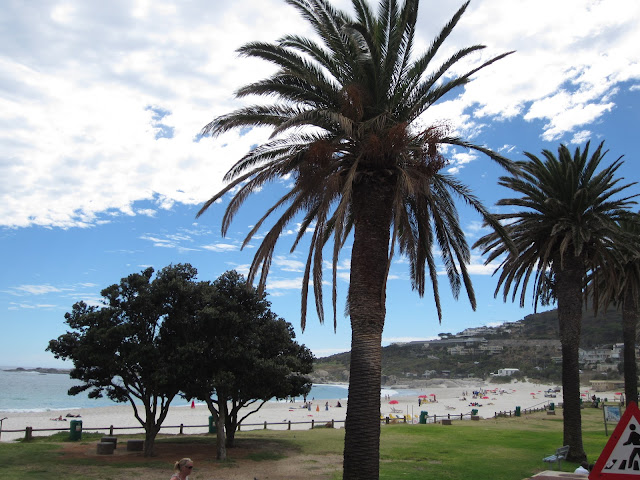 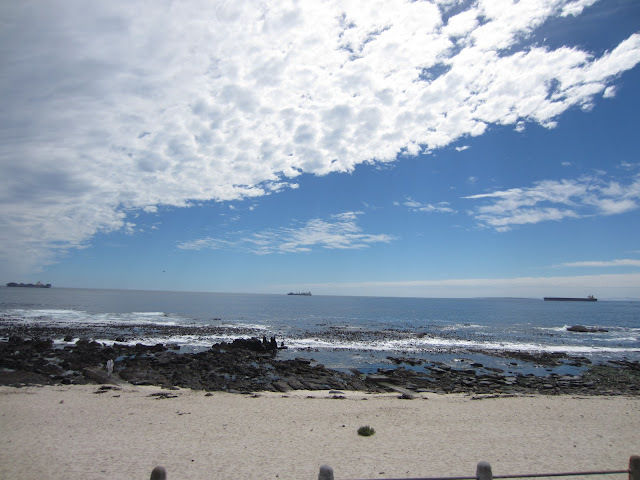 Table Mountain is probably the most popular landmark in Cape Town. It was quite interesting to see a flat mountain, shaped like a table! I heard that Table Mountain can get quite cloudy, so the first chance you get to go up the mountain (like on a clear morning), you should do it!

There were two options on how to get to the top of Table Mountain. We could either take the cable car or hike up. I pretty much knew immediately that we were NOT going to hike up, so of course we took the cable car. :p 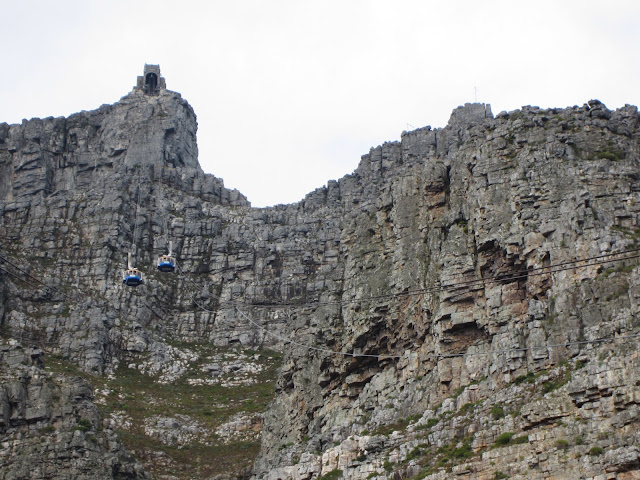 I prebooked tickets online which was good for a period of 2 weeks, and it turned out to be such a time saver. There was a huge long line of people trying to buy tickets, and since we already pre bought the tickets online, we were allowed to go in directly and wait for the cable car. 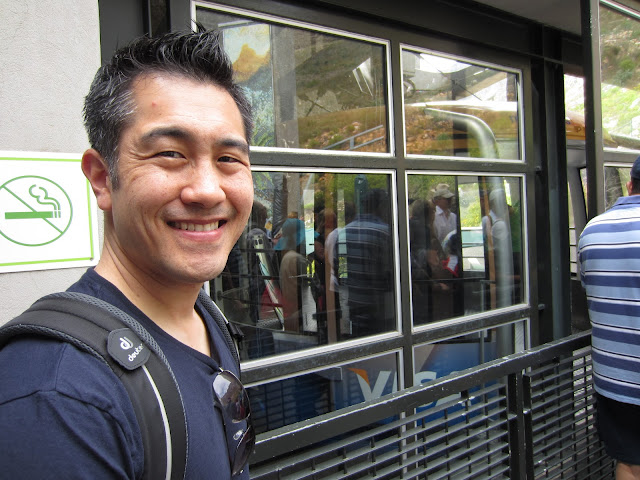 The cable car ride reminded us of a similar ride we did in Palm Springs. The ride up was much faster though and we arrived in no time! (It was not as far up compared to Palm Springs.) 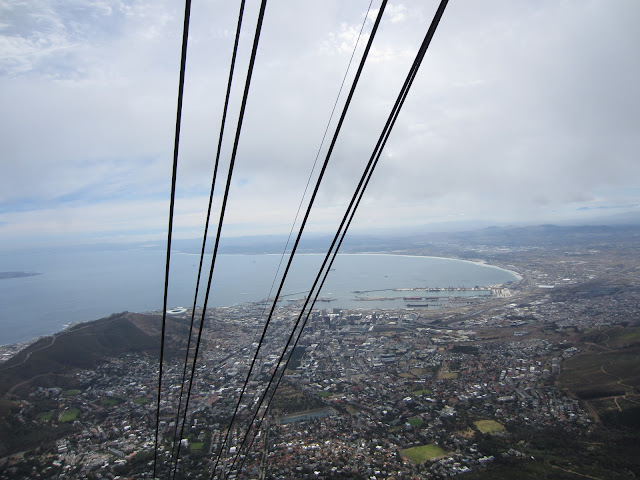 The view from the top of Table Mountain was amazing! We're so glad we were able to visit on such a clear day! It was pretty chilly and windy though so definitely bring your jacket. 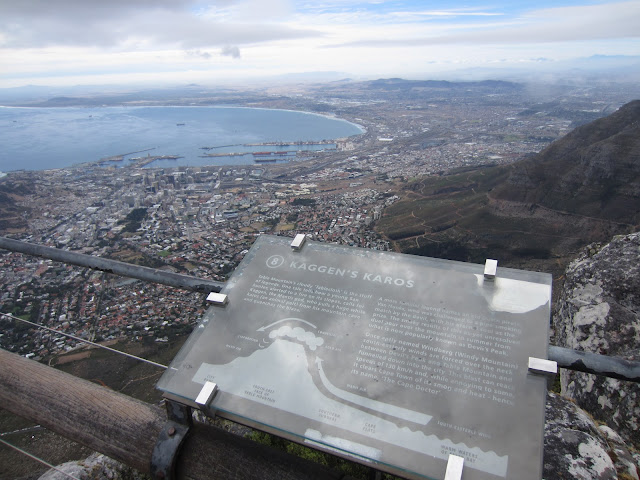 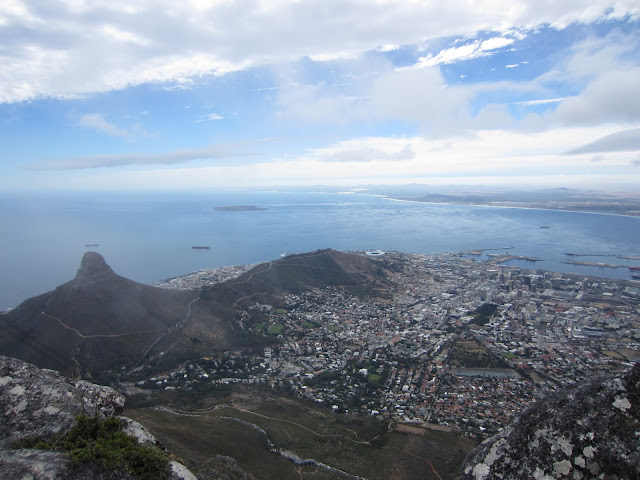 There was only one restaurant on top of Table Mountain, and food was cafeteria style and very so-so. But of course it was really crowded and since Dan was so hungry, we had no choice but to eat there. :p

A Cape Peninsula tour is a must if you are in Cape Town. A lot of people self drive but we really didn't want to drive, so we booked a tour with Ulungele Tour. It was supposed to be a small group tour, but it turned out that day it was just the two of us. So it ended up being like a private tour!

We were so glad we didn't have to drive since the roads are windy. Our guide/driver was Terrence, and he was great! He provided commentaries and useful insights to the areas. Our first stop was Hout Bay with an optional tour to go to the Seal island. Since we're from California and have seen seals many times at Pier 39, we decided to pass.

Our guide actually said that it was probably good that we skipped the seal tour, since we went ahead of all those big coach tour buses.

The drive was definitely very beautiful, reminded us of California coast or the Amalfi Coast. We stopped by Chapman's Peak to take a quick picture.


Our next stop was a beautiful stretch of white, sandy beach. Unfortunately we didn't have time to actually go to the beach!

We then visited an Ostrich farm. There was no fee to visit the farm, as it looked like they make money from the small visitor shop. We noticed that the ostriches were put in pairs, and the male ostriches were prettier (black/white feathers) compared to the females (grey feathers). 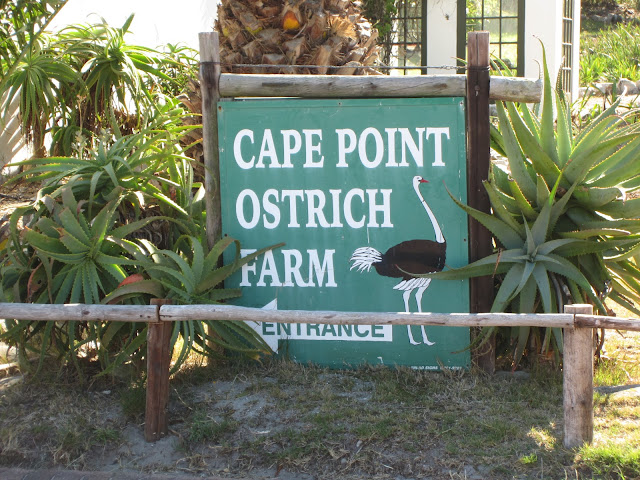 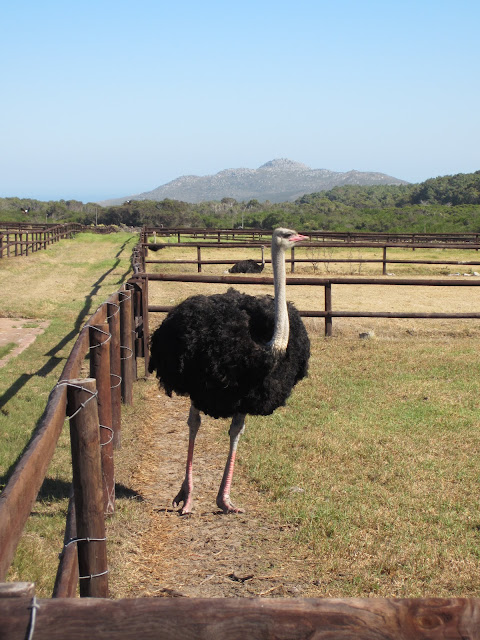 Our next stop was Cape Point and Cape of Good Hope, which was the southwestern most part of the African continent. We noticed tons of Chinese tourists (like 3-4 coach buses full) and we were glad we were ahead of them since it would have taken forever trying to wait to take a picture if we were behind them. 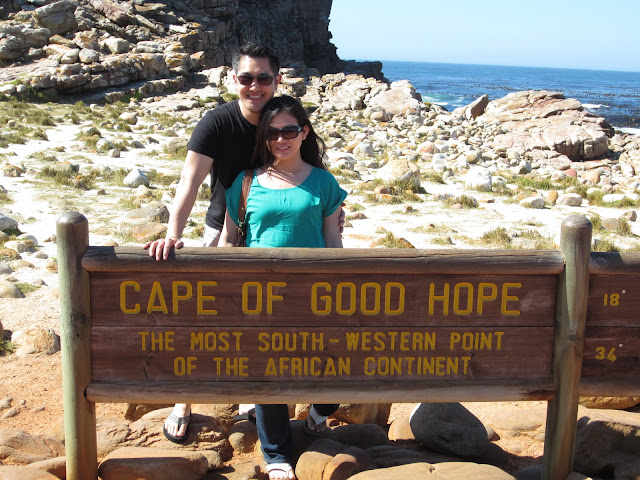 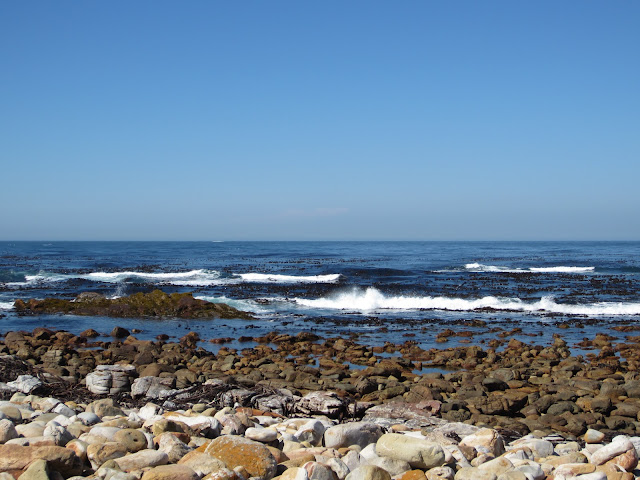 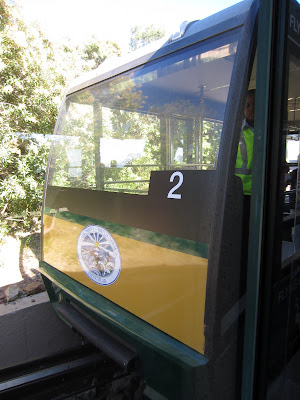 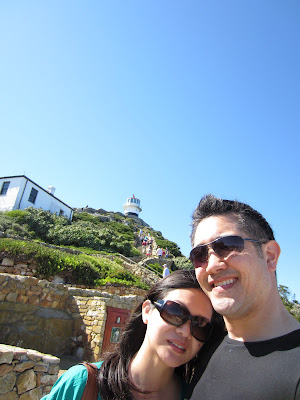 It was a quick 2-3 minutes ride and we were at the top. By the lighthouse, there was a sign that marked the distance from Cape Point to various cities in the world. 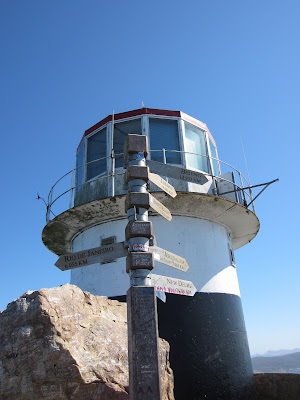 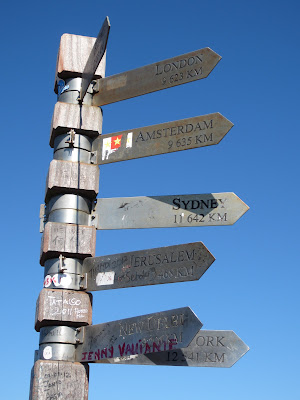 We stayed for a little bit, took some pictures, and then walked down. The walk down was a nice, breezy walk with vast views of the ocean. 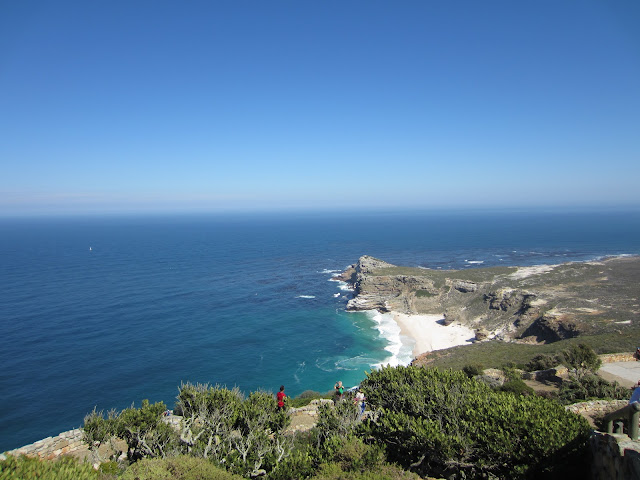 Next stop was Boulders beach which was a famous penguin colony. I didn't know that penguins could live in a climate such as South Africa. I always thought that they only existed in colder climates. Apparently these penguins were indigenous to the area. They were a lot smaller in size than I expected. Also, we could only see them from a platform and were not allowed to walk on the beach itself. 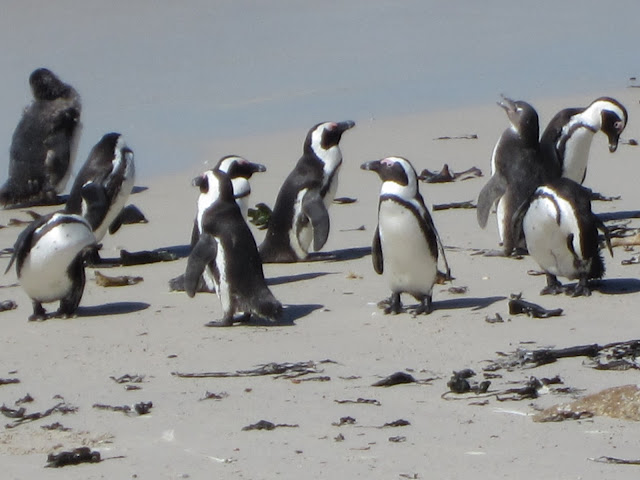 Our last stop on the Peninsula tour was Kirstenbosch Garden. The views of Table Mountain from the garden were amazing, and the whole garden itself was beautiful. There were quite a few families who were having picnics in the garden area. However, other than garden viewing and picnicing, there really wasn't much to do unless you're big into plants. If you have a limited time in South Africa, I would probably say skip this one. It was still beautiful nonetheless. 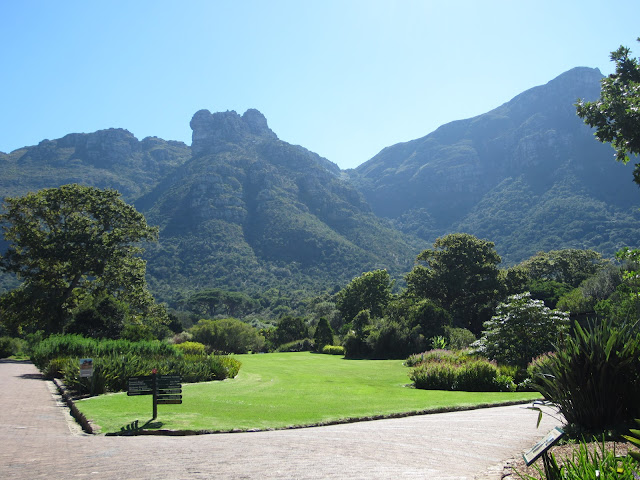 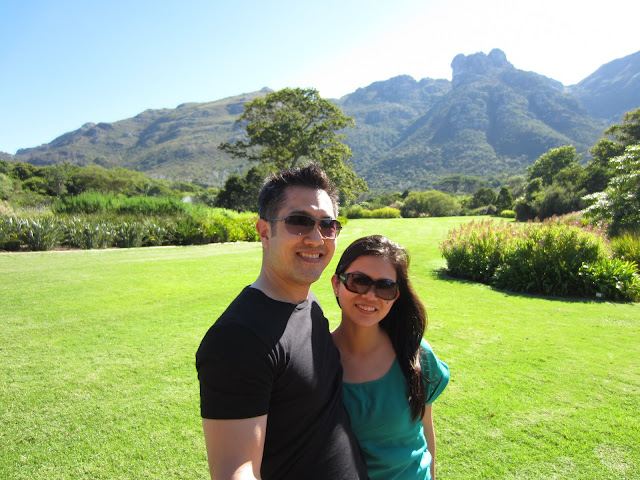 We walked around the garden a little bit, got a cool, refreshing drink (Grapetiser!) and then decided to head back. 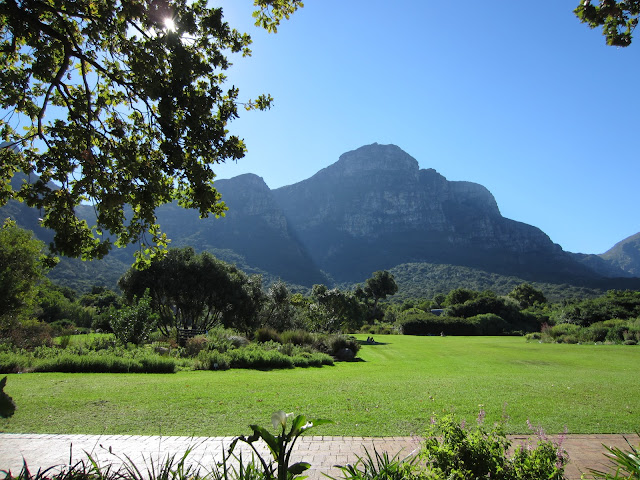 The Victoria & Alfred waterfront is probably the most touristy area in Cape Town. A lot of tours originate/pick up from this area. As is almost everywhere in Cape Town, there's a view of Table Mountain. 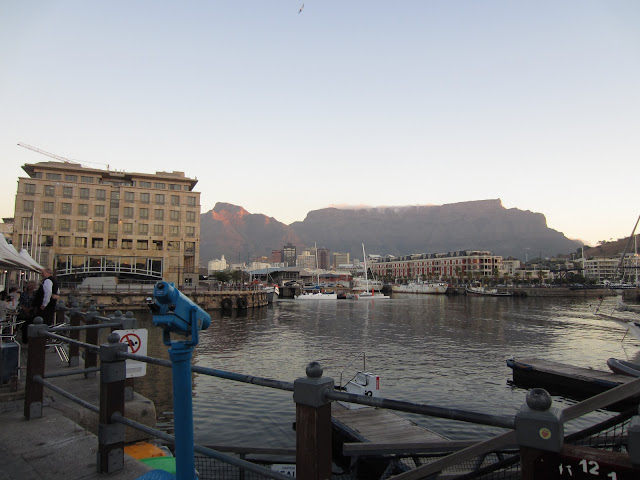 There were a lot of seafood restaurants along the harbor, and there was actually a mall with several fast food options inside as well. 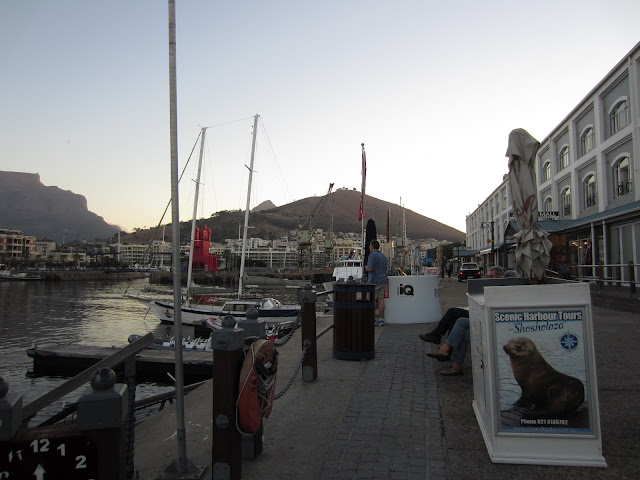 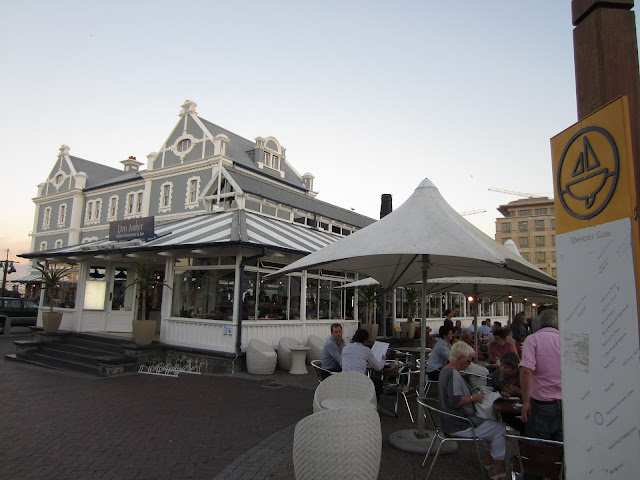 I pre-booked the 9 AM ferry for the Robben Island tour online. It is advisable to book in advance since they sometimes sell out in high season. We took the ferry from the V&A gateway and the ride took around 40 minutes.

The island used to be a leper colony and over time became a prison. It was the place where Nelson Mandela was imprisoned. 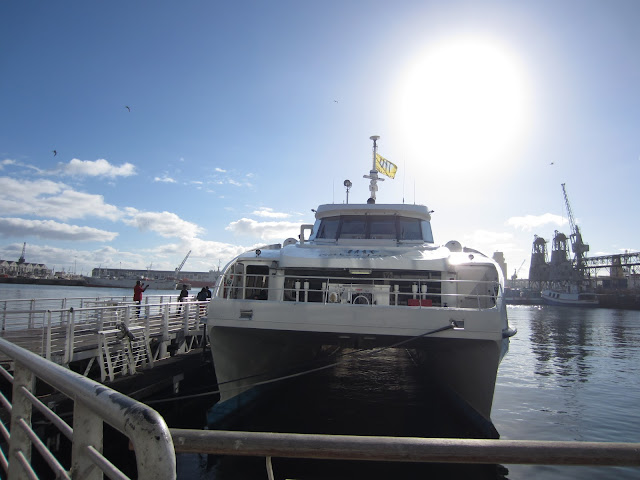 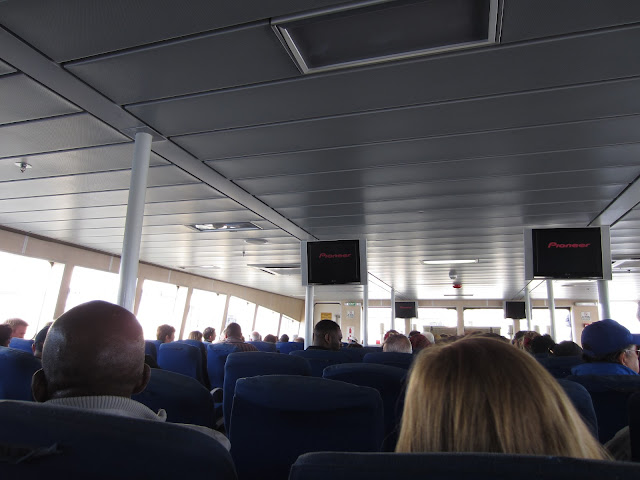 Once we got to Robben Island we were put in big buses and then took a tour of the prison. The guide was a former prisoner who was imprisoned charged for sabotage. He explained their living conditions as well as their inferior diet compared to the colored/Asiatic prisoner. 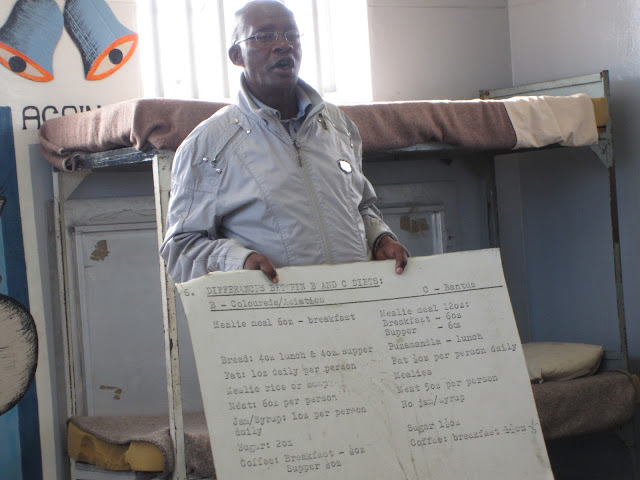 We walked around the various prison buildings and saw Nelson Mandela's old cell. This visit reminded us of our Dachau visit in Munich which we had done just the week before.

Afterwards we went back to the bus for a tour around the island. Overall it's a pretty educational tour, although I felt the size of the group was too big (maybe around 60 people per group?). It would have been nice to have a smaller group. During our visit we noticed there were some minivans which were probably for private groups, so it looked like it's possible to book a private group, probably for a higher cost.

Cape Town had some wonderful sights and we definitely were not bored here since there were so many things to do. Our highlight was definitely the HOHO bus and the Cape Peninsula tour. A lot of people who visit Cape Town also do a shark cage dive, but we were not up for it! :) We were in Cape Town for 4 nights which was probably a good enough time to see the major sights. We didn't get a chance to visit Camps Bay though for a sundowner, or just enjoy the beach and people watch. If you can, try to fit that in your schedule if you do go visit Cape Town!

Next Post: Food in Cape Town
Posted by Marcela at 9:05 AM