For our first full day in Munich, we booked a free walking tour with Sandeman. I was not familiar with this concept before but apparently these "free tours" are common in Europe. The concept is that the cost of the tour is free, and the guide works only for tips. Most of the guides are typically not originally from the particular city. Our guide, for example, was from Ireland but he had lived in Munich for the past two years.

We met at Marienplatz, the city center in Munich. It was beautiful but a lot smaller than what I imagined. Our guide explained that the new city hall (pictured below) ironically is older than the old city hall since the original city hall was destroyed during world war. 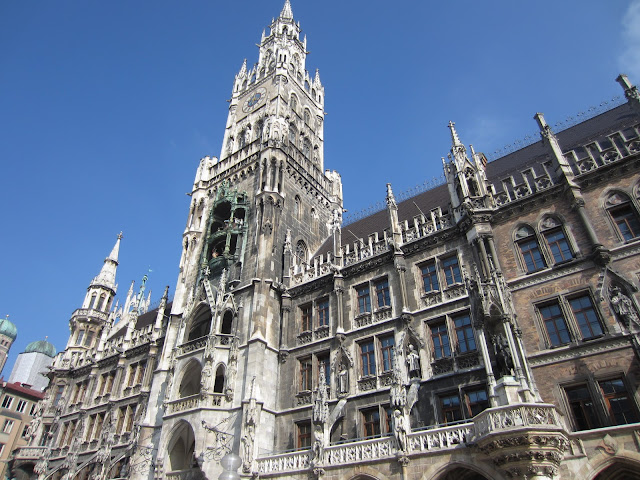 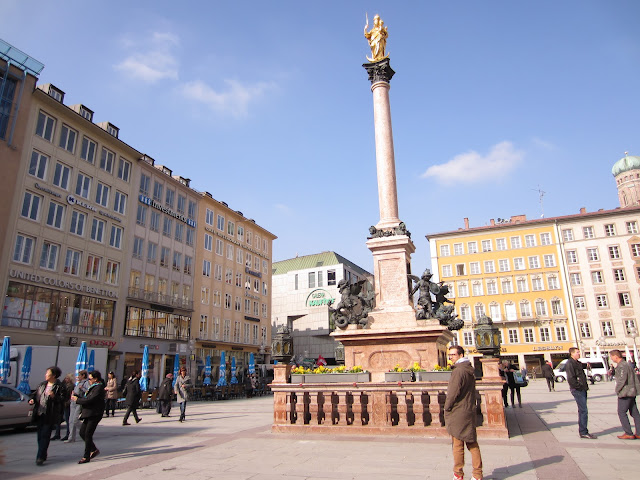 Munich is part of Bavaria, which is a special state in Germany. The people are very proud of being Bavarian and our guide compared it to the state of Texas in the US. 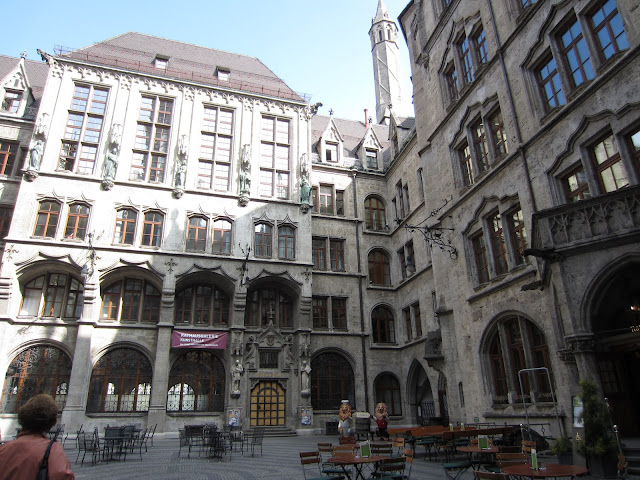 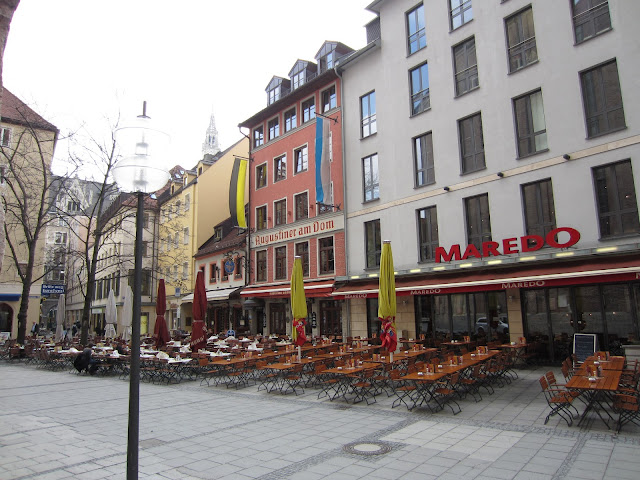 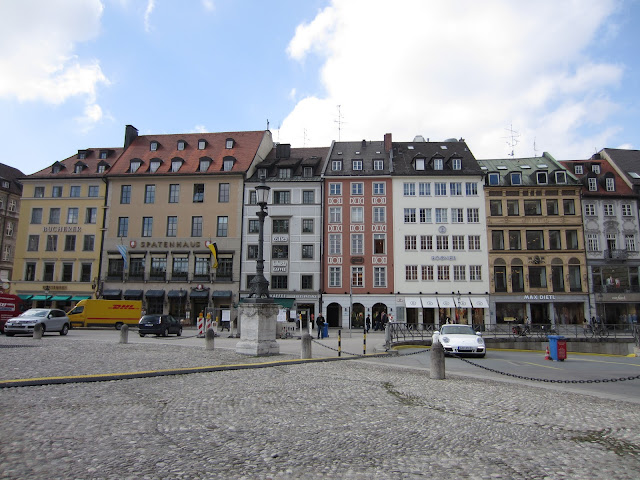 We visited the world famous Hofbrahaus, a popular beer hall. Bavarian beer has no chemicals and it is actually a law not to put any chemicals, hence why the beer tastes so good (so our tour guide said). There are 6 main breweries in Bavaria and our guide's favorites were Augustiner and Paulaner. Beer gardens (outdoor) are popular during summer, and during winter people move to beer halls (indoor).

There was a section where mugs/steins for "regulars" were kept. In order to get a spot to store one's mug, one must be an uber regular. Some people pass down their spot from generation to generation.


Our tour ended at the Viktualienmarkt which is an outdoor market. It's a nice area to browse around and visit all the different shops.


The tour took three hours total, and we thought it was quite well worth it considering it's free. We definitely felt somewhat obligated to be a little generous with tipping since we enjoyed the tour.

We wanted to do the BMW factory tour but the only day that we could do it, they were all sold out. Reservations could only be made by phone. So unfortunately we couldn't do the factory tour, but we did make a visit to the BMW museum across the street.


The entrance fee to the museum was 9 euro per person. We actually came around 5ish and since the museum closes at 6 pm, we got a 3 euro discount each. Not bad! 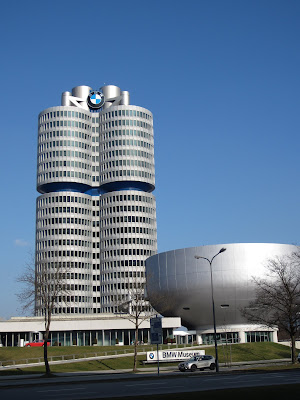 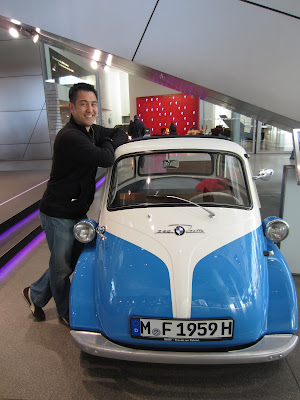 They had a cool display with various balls that changes shapes into different car shapes. 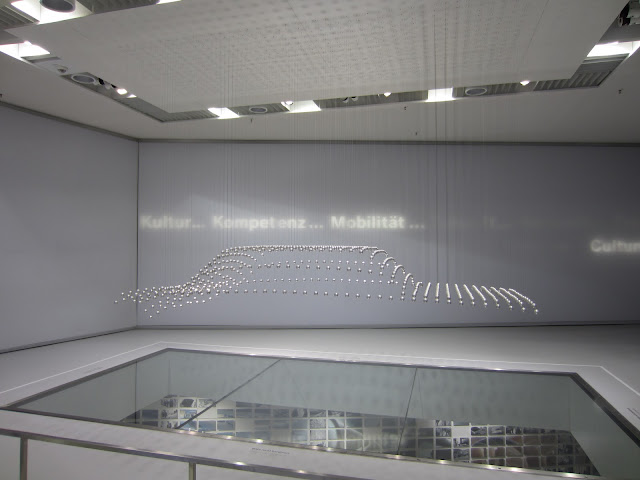 There were displays of the various BMW models throughout the years. 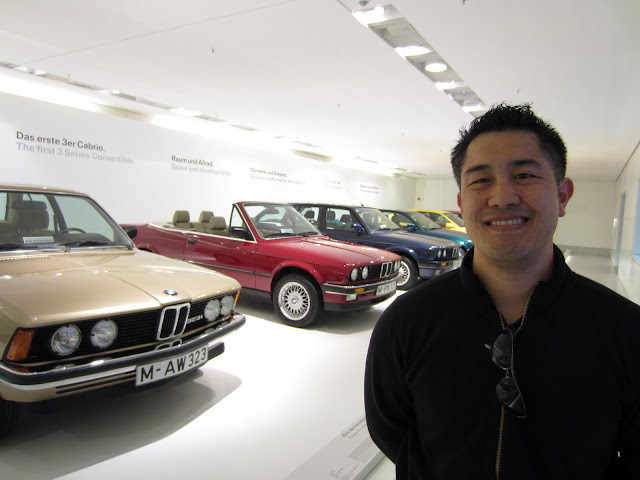 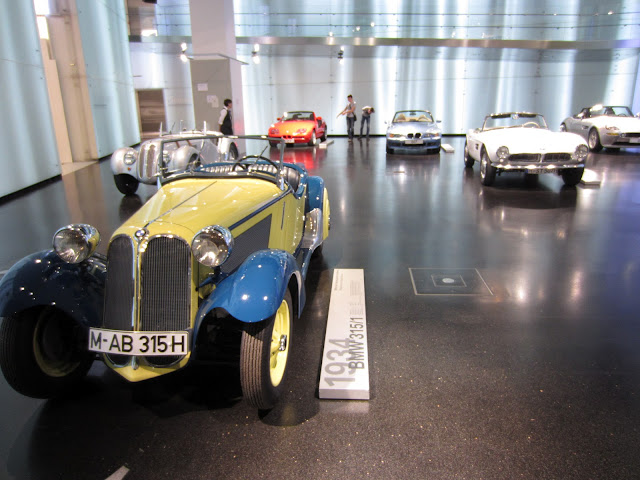 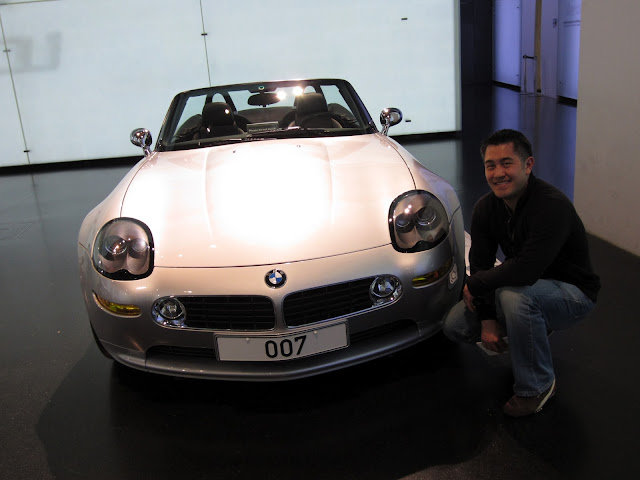 We thought the museum was a bit small and not sure if we would really recommend it. We've heard the factory tour is much more interesting. However, if you are a BMW aficionado, then you might enjoy the museum more than we did.

We booked a Salzburg city tour for 39 Euros per person from the Munich tourism office. The cost actually included the regional train ticket. We met the guide in front of the Munich tourism office at Marienplatz. Our tour guide was a German lady named Astrid. We really liked her as she was very nice and we had a really small group so the experience overall was better. We went to Hauptbahnhof to took the train to Salzburg. The train ride took about two hours one way. We left Munich at 9:40 and arrived in Salzburg at around 11:40 am. 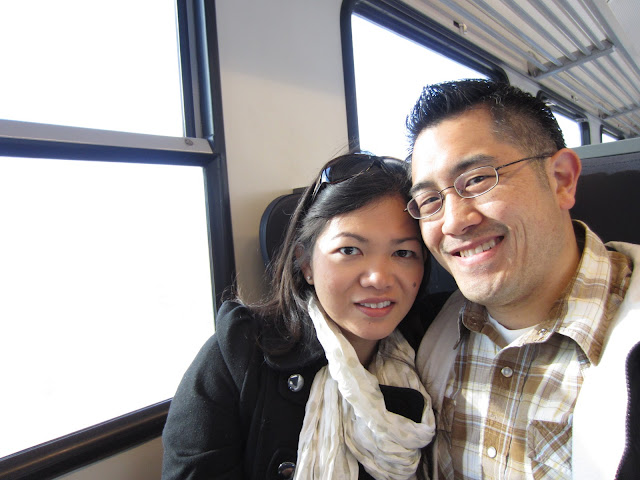 Salzburg is actually in Austria, and the name means salt fortress. In the old days, salt trade was the main income for the city. It was interesting when we passed the "border" as it was just passing over a small river. Our guide took us around Salzburg for one hour and then gave us three hours to roam around on our own.


We visited the beautiful Mirabell garden where some scenes of "The Sound of Music" were shot. Our guide explained that sound of music was not a popular movie in Europe even though it was shot there. But because a lot of tourists kept asking about it, they now have Sound of Music tours. The garden was built by the archbishop who was also the prince of Salzburg, and even though he was an archbishop, he had a lover and had 15 children! The garden was built as a gift for his lover. 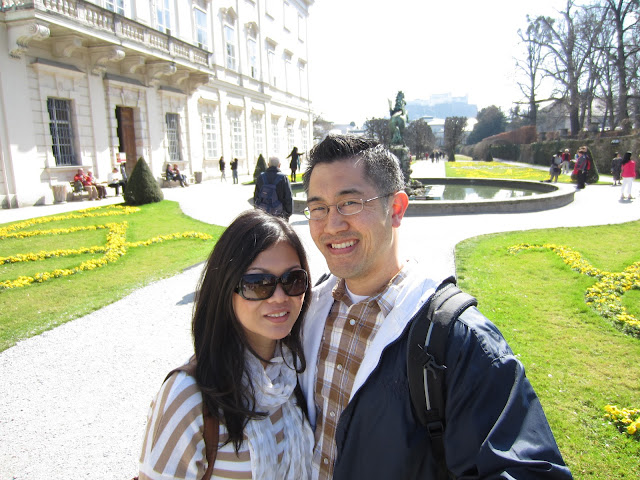 Salzburg is also the birthplace of Wolfgang Amadeus Mozart. We visited his old birth house which is now a museum. 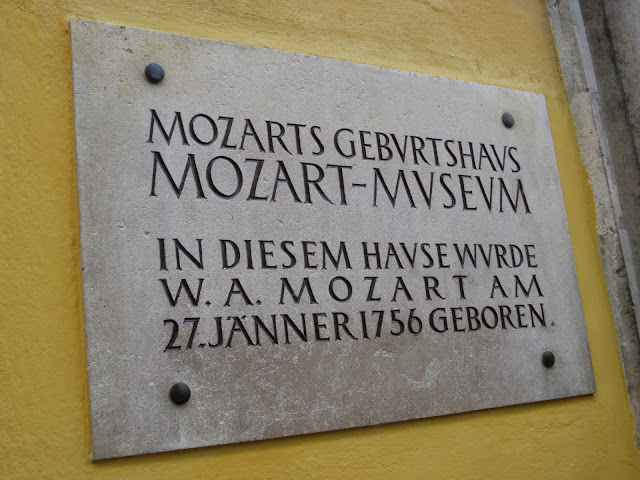 During our free time, we grabbed lunch and then walked around town. We both thought Salzburg was a really pretty town; it reminded us of Sorrento in Italy. We both preferred it to Munich actually, as it was more quaint and picturesque, even though very touristy. We didn't get a chance to visit the fortress up on the hill, but one of the couples from our group went and loved it. Here are some pictures: 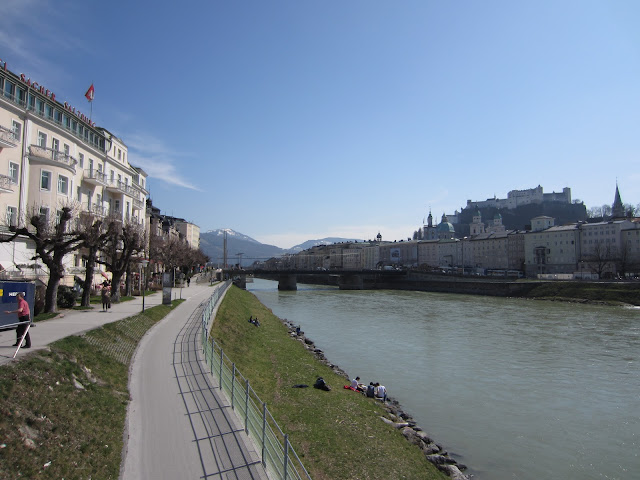 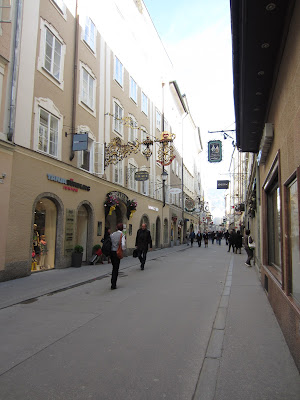 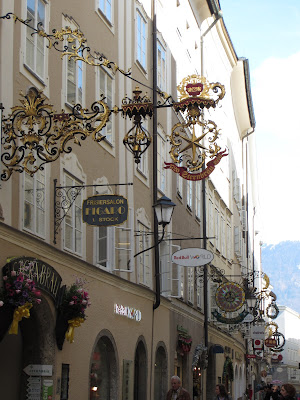 There were lots of outdoor cafe which would be nice to spend an afternoon drinking coffee and enjoying a light snack when the weather is nice. 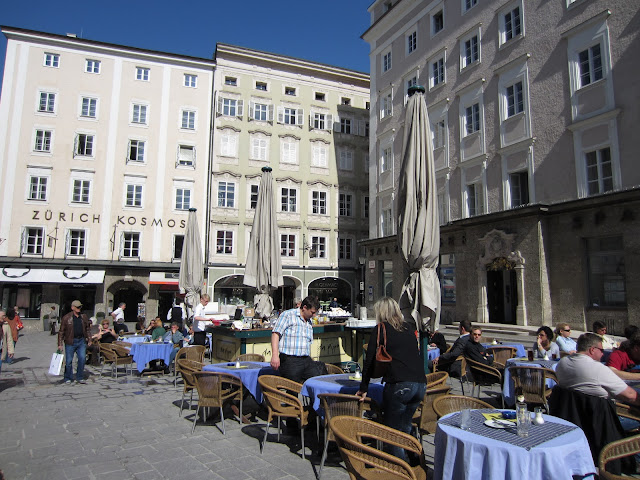 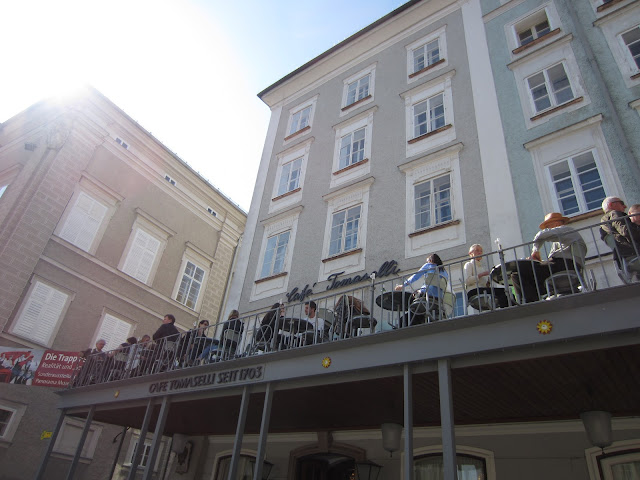 Our guide told us that the Red Bull drink was headquartered in Salzburg and was actually one of Salzburg's biggest employers. The owner is an Austrian men who discovered the drink when on a vacation in Thailand. Interesting tidbits, huh?

We took the train back at around 5 PM and got back to Munich at 7 PM. Overall we would recommend this tour, or you could do it on your own, too. It was nice though not having to figure out the logistics and having a qualified guide to follow :)

The town of dachau is around 10 miles northwest of Munich. It is actually a beautiful town and the local residents lament the fact that now it is mainly known for the concentration camp. We took the Dachau tour from Radius Tours but booked via Viator and actually got it for a slightly cheaper price than the advertised 21 euros per person.

Our guide, Alun, was originally from London but now lives in Munich. We had about 15 people in the group. We met at the Hauptbanhof central train station at 10 AM and took the S-bahn train to Dachau. Once we arrived at the Dachau train station, we took the bus to the concentration camp.


The tour was quite disturbing and sad but at the same time it provided a clear message that mankind is capable of doing great things but also terrible things. It was really hard for me to wrap my mind around how such a thing could happen.


Some summary from this tour:

Overall this was a very thought provoking visit. It was very hard for us to grasp how humankind could do such a thing, but it's probably because we grew up in a very democratic society. The main message was that something like this should never happen again anywhere.

Next Post: Food in Munich
Posted by Marcela at 4:10 PM