We met our ranger, Robin, for the first time after our afternoon tea and snack. He introduced himself to us and was very friendly. A ranger is basically the safari guide, and he is the one that drives the jeep, provides narration, and also points out all the different animals. A ranger is usually accompanied by a tracker. Our tracker was Ernie, whose main job was to find the animals. Ernie sat by himself up front so he could more easily spot animals.

The jeep seated up to 6 people in one vehicle. During our 3 days which consisted of 4 game drives, there were no more than 4 guests which was nice as it gave a more intimate experience.


The drives were really quite nice. During the drive, I just tried to soak in the experience, looking at the vast landscape, enjoying the cool breeze. Dan was a bit more serious in trying to actually spot animals; look at him below! :)

During our first drive we saw 2 cheetahs, 2 lions, elephants, and a tortoise. Our ranger explained that the cheetahs were brothers, and they were the dominant male cheetahs. There were other cheetah in the reserve but they usually hide. I asked him how he knew which cheetahs we saw, and he said he could tell by their size and their face marks.

It was pretty interesting to see how both Robin and Ernie could spot animals from a distance, or find animal tracks to actually trace where the animals were. They were in constant radio communications with other rangers who were also driving around and communicating where the last sightings were. For example, we came into the areas where the lions were last spotted. Robin expertly navigated through the area, found the jeep tracks and magically found the 2 lions.


Since it was getting dark, we went back to our lodge for dinner. I will cover the dinner in a separate post: Food at Kwandwe. After dinner we went to sleep early since we had an early wake up call the next morning for our morning game drive.

We got our 6 am wake up call and then headed out for coffee/tea. There was a thick mist in the morning, so it was harder to spot the animals but we managed to spot 2 giraffes up close.


For our morning snack break, our ranger surprised us with nice crumpets in the bush! They were so tasty.  Our tracker also made us some delicious hot chocolate. 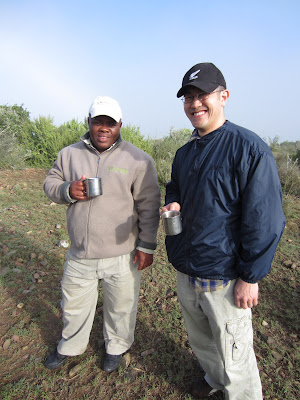 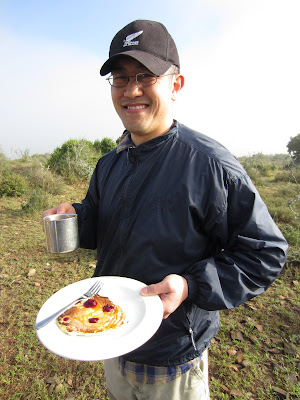 We then headed to breakfast back at the lodge, then Dan and I took a dip at our small plunge pool, and then we took a nap.  After we woke up, it was lunch time, then afternoon tea, and then our afternoon drive.

Unfortunately, the weather forecast said that thunderstorms were coming. We could see the dark clouds around the area, so at first we weren't even sure whether there would be a drive. The weather appeared to be holding up so we went on our drive. We went to look for rhinos and saw 5 white rhinos. We got pretty close to them. It was very exciting and scary at the same time. 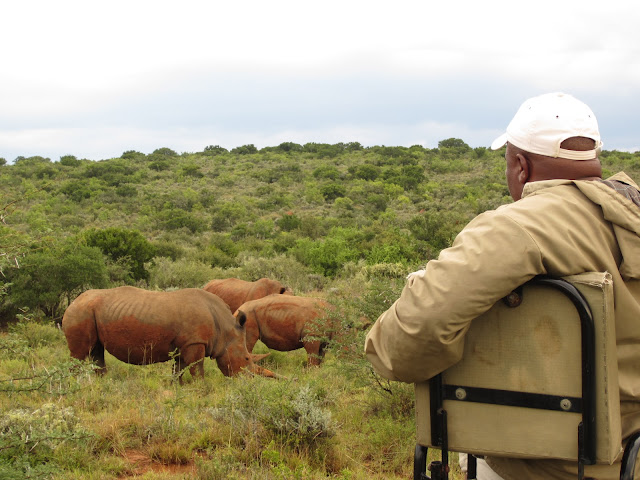 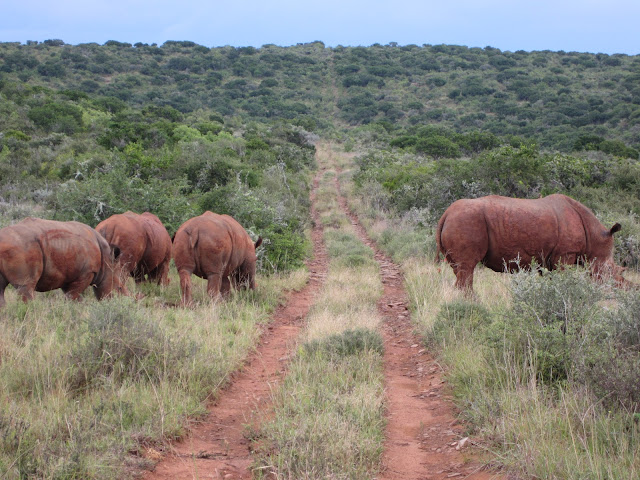 We then wanted to look for buffaloes. We drive for a while to where they were spotted them from afar the day before, and Ernie somehow managed to track the buffaloes from a distance. We came up to a herd of maybe 60 buffaloes, and that was quite amazing. The buffaloes were staring at us, so it was a little intimidating.


The rain started to really come down, so we started heading back. It was thundering and scary actually. We made it back to the lodge wet but ok. :p

We woke up to knocks on our door (personal wake up call) since the telephone lines went down due to thunderstorms the night before. Thankfully this day was nice and clear. After a quick morning tea, we headed out for our game drive.

The first 1-2 hours were a bit slow as we didn't see much. We saw some zebras, kudus, and baboons here and there but nothing big.


While we were on top of a hill about to take a snack break, our ranger spotted cheetah cubs running around. We quickly drove down and watched quietly as the cheetahs passed right by us, and the 4 cubs were playing with each other. It was definitely the highlight of our drive. There was also a herd of zebras next to the cheetahs, and we saw all the zebras ran off except for the male zebra who stayed in between to protect the others. It was quite an interesting scene.


We thoroughly enjoyed our safari experience. There was a good variety of animals, and we had some great sightings. The only "downside" of being in a private reserve such as Kwandwe was that we didn't see a large herd of 20 lions, for example. The reserve was self preserving.  In order to maintain that "equilibrium", they could not have too many "predators" and so the number of lions, cheetahs, and leopards was limited proportionately.  In general, there was a smaller number of animals, so we didn't see a herd of wildebeests or 100 zebras, for example. Though we did see like 60 buffaloes which was pretty amazing.

Some tips from our safari experience:

Next Post: Food at Kwandwe
Posted by Marcela at 7:54 AM