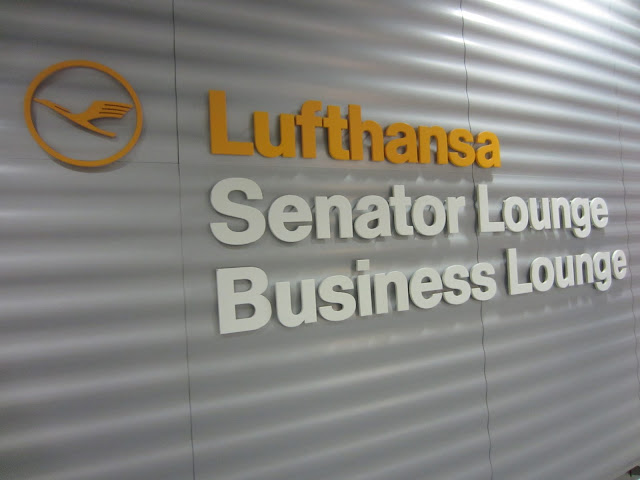 We took the train to the airport and checked in our bags. We waited at the Lufthansa Business lounge and had some Indian food, pretzel, and beer. They also had a couple computers for Internet connection for free. It was nice waiting at the lounge :) 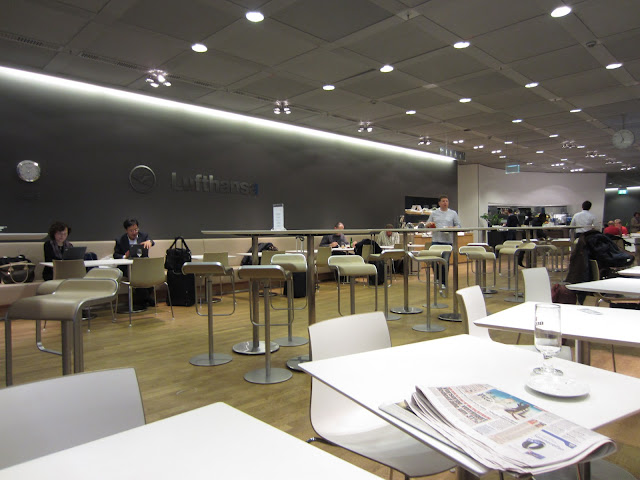 Boarding started around 1 hour before our flight time and this time we were seated in seats 2A and 2C. There was no first class in SAA, only "Premier class" which was like business class. 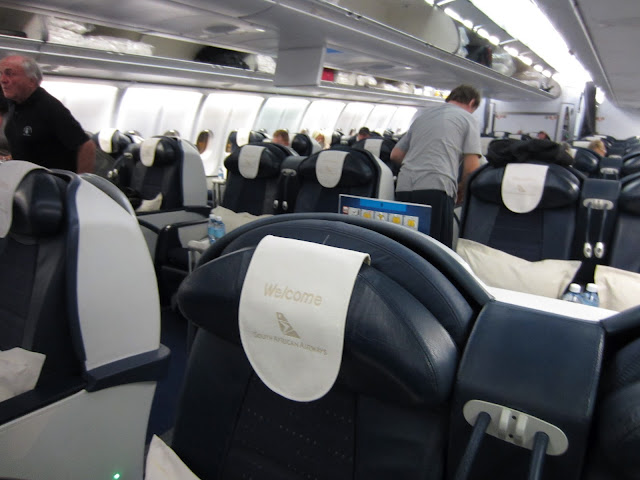 The seats were a little older but the space we had was amazing! It felt even more spacious than our Lufthansa business class seat. I had to really reach over to grab stuff from the seat back pocket in front of us. 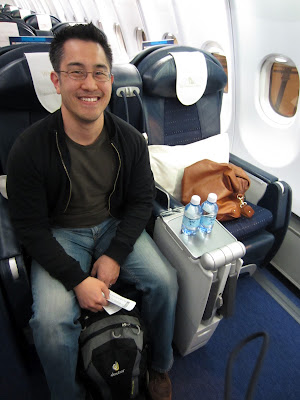 Service was efficient but our stewardess wasn't very warm, and felt a little bit hurried. Anyways, I discovered a new drink that I really liked called Grapetiser, which is basically a sparkling grape juice. It became my favorite drink during my stay in South Africa. The drink was served with the 3 amuse bouches: smoked salmon crostini, ham with cheese, and tomato mozarella.


I ordered the shrimp scampi appetizer and the vegetarian moussaka for the entree.The shrimp appetizer was ok, and a bit on the salty side.


The vegetarian moussaka was quite tasty, although again, tasted a bit on the salty side. I was too full at this point so didn't finish.


Dan skipped the appetizer and had the chicken and rice dish for dinner.


I ordered the chocolate torte, which was actually quite good. Much better than the passion fruit cheesecake.


After dinner we put our seats in sleeping mode and they turned into a fully flat bed. They provided a "pad" as well as blanket and pillow. There's no turndown service though, which was fine by us. It was easy enough to make the bed ourselves. :)


We also used the socks in the amenity kit and the toothbrush. We slept well and woke up around 2 hours before landing. Breakfast was served 30 minutes after waking up. The breakfast fruit platter was served, and then we got a choice of "continental breakfast" or "hot breakfast."

I had a continental breakfast and misunderstood what it meant. I thought, like Lufthansa, it meant muffins, croissants, etc but when it came, it was cheeses and cold meats. Hmm. But the stewardess did bring the bread selection so I got my croissant fix then. 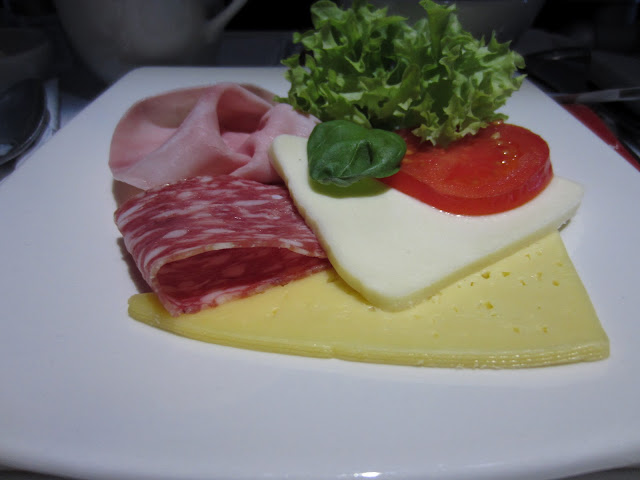 Dan ordered the hot breakfast which was egg, sausage, potatoes, and veggies. 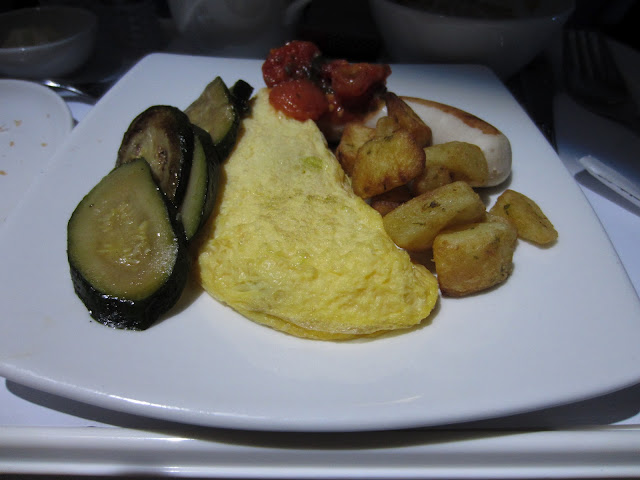 
We were flying to Port Elizabeth which was the closest airport for our safari destination.  Our flight landed in Johannesburg at 8:35 AM and after immigration, checking in luggage, and ATM, we reached the lounge at around 9:30 AM. Our flight to Port Elizabeth was not until 1:05 PM so we had quite some time to kill at the lounge.  We went to the SAA domestic lounge called the Baobob lounge. 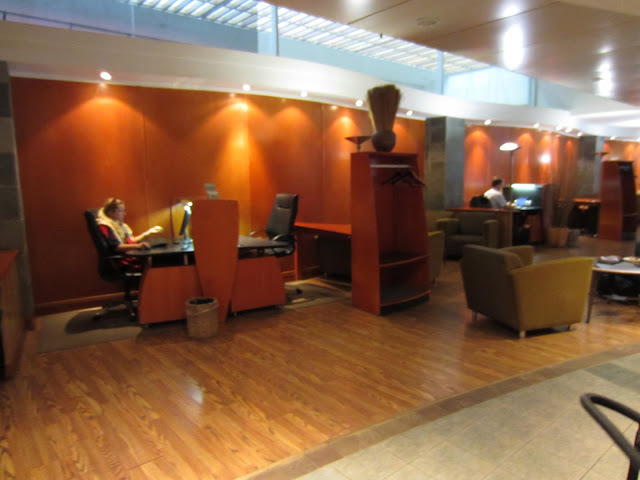 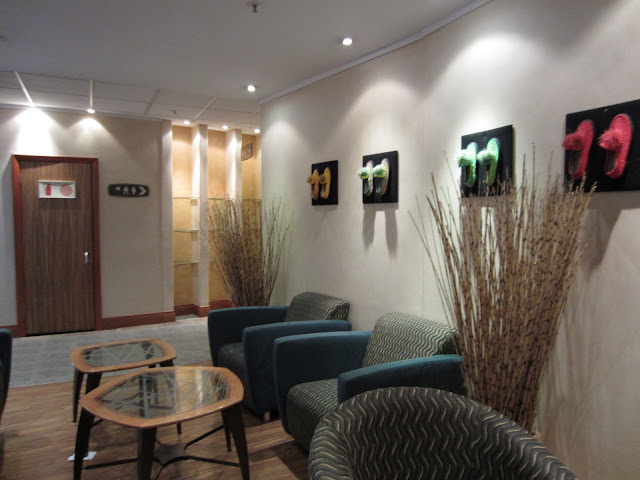 There were 4 available restrooms with showers, and Dan went straight to take showers. He didn't realize that you need to get towels first from the front desk, but it was too late for him. :p I knew better though and got a towel before I went to take shower. It looked like for the most part the showers were occupied since I saw a lot of people coming through with towels.


Food selection in the lounge was so so. In the morning there were some muffins, fruits, and cold sandwiches. Around lunch time they added some soup and cheese & crackers. Drinks were not self service; there was a bar area which was manned. We left the lounge 10 minutes before boarding time and went to our gate.

There was not a separate line for business class, so we waited in line in the regular line. We sat in seats 2A and 2C which was the first row. The business class was the really old style; the plane looked quite worn. The seat configuration was 2-3 which is interesting, and there was probably about 6 rows of business class. 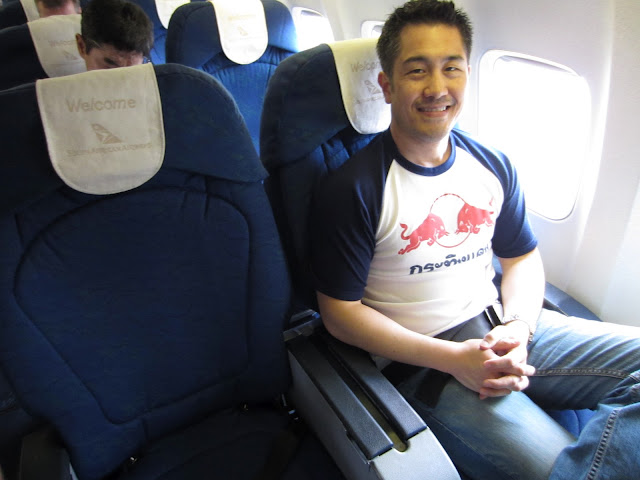 I of course ordered the Grapetiser. The choice for lunch was beef salad or a vegetarian salad. I ordered the beef salad but it was almost inedible, so I only had 1-2 bites. 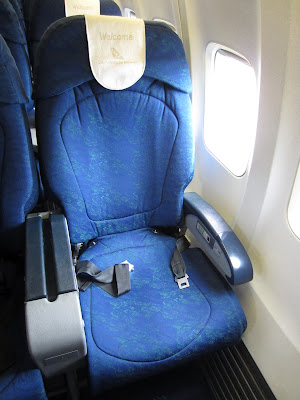 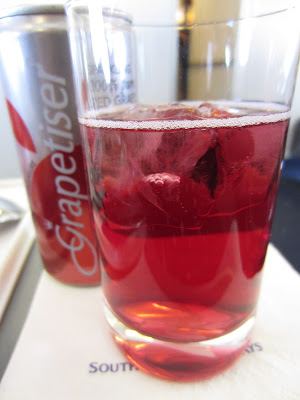 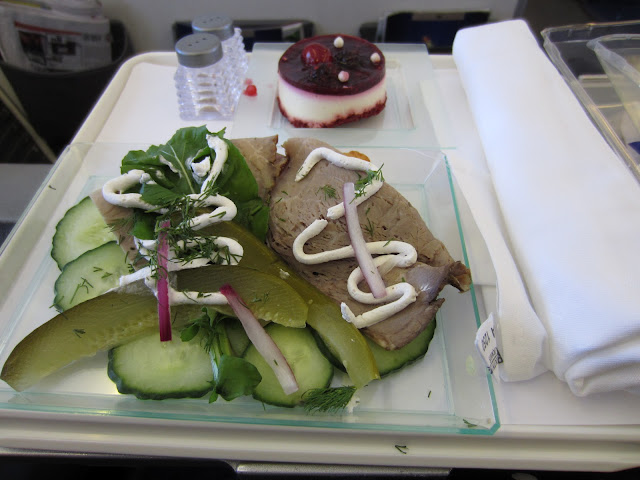 We landed in Port Elizabeth at around 2:45 PM. The airport was really small. As soon as we land, we walked directly to the baggage pickup area. Our hotel had arranged for a pickup from Blunden transportation service. 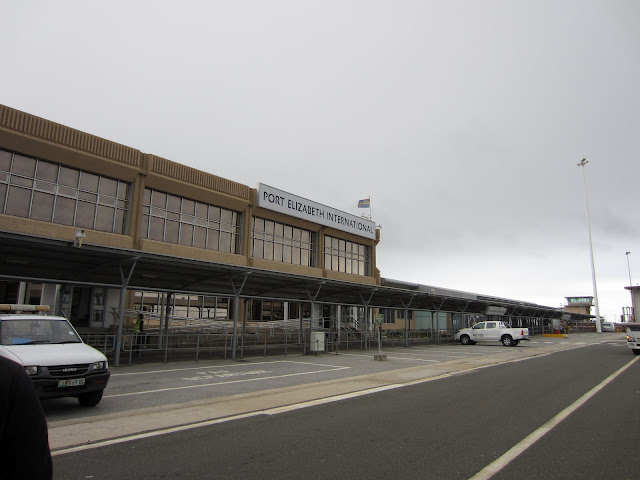