After our unforgettable safari, we were off to our next destination: Cape Town. We've heard so many great things about this city and were excited to explore it. While in Cape Town, we stayed at the Westin hotel. The Westin Cape Town was located in the Central Business District area, directly across from the Cape Town International Conference Center. The hotel was HUGE, and felt very business-like. They provided free shuttle that ran every 30 minutes to the V&A waterfront area, only about a 5 minutes ride.  This was definitely a nice perk since we wouldn't have to take a taxi to the waterfront.

We really liked the location of the hotel as it was a nice base for activities around Cape Town. The red hop on/off tour bus also stopped directly in front of the hotel/conference center so it was easy enough to catch. 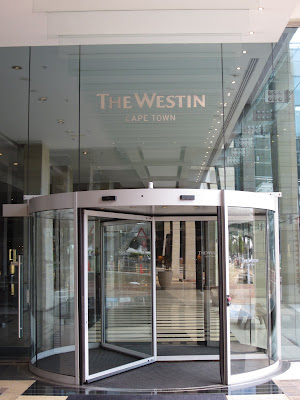 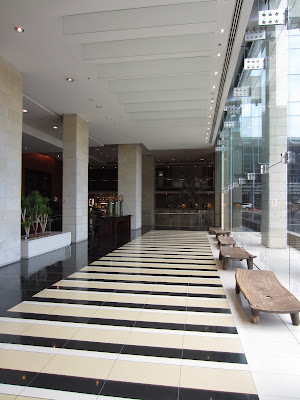 The lobby area had a nice smell to it every time we enter the building, and they provided free non-alcoholic, refreshing drink by the entrance. I always make a point to get a small glass every time we passed by. :)  It was basically a mixed fruit juice drink.

Service generally was pretty good. The concierge was helpful with making restaurant reservations which I always took advantage of since calling the restaurant directly would cost money (because of the phone charges), so I always just had the concierge make reservations for us.

We got a room on the SPG preferred guest floor, which was one of the higher floors. We had to use our room key to enter the hallway from the elevator banks, which was a good security measure. 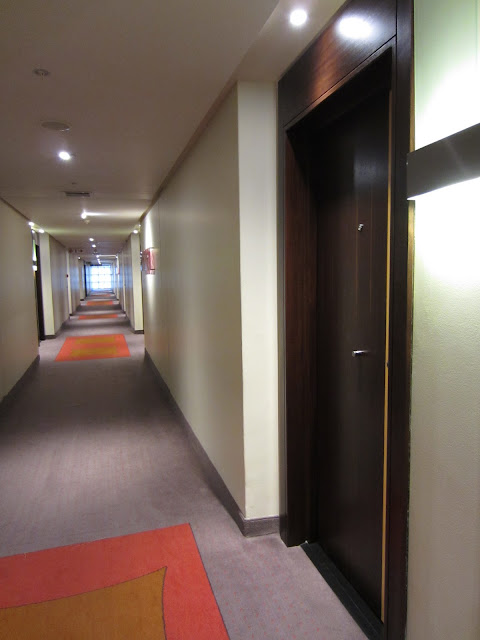 The room was a decent size, and we had a view of the Central Business District and the waterfront area. Our bed was a regular King bed, and it was good to know it wasn't one of those twin beds pushed together. There were green accent walls which was quite bright. 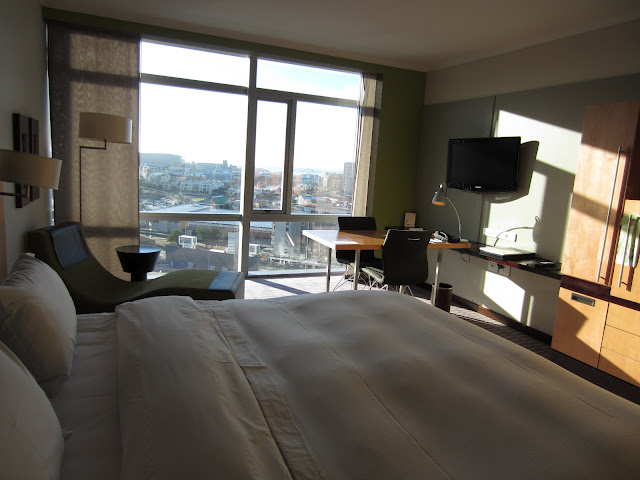 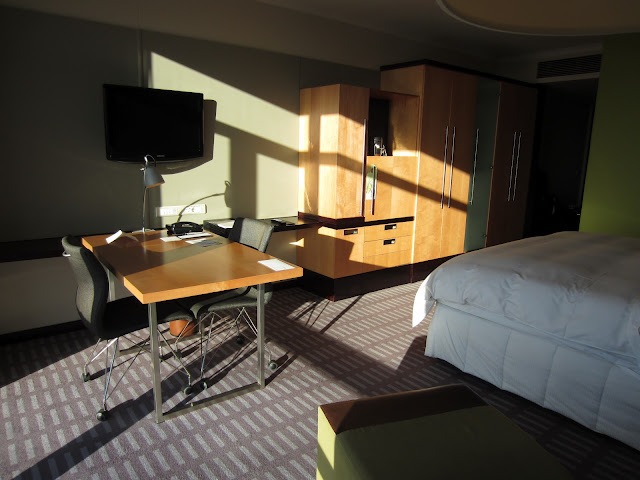 The bathroom was good sized as well, and similar to the bedroom, had green accent walls. There were double sinks, as well as a separate shower, toilet, and bath tub. The bathroom was decent but didn't feel luxurious, probably because of the tiles as opposed to marble.

There was free wi fi which was great, BUT we had to log on every single time we used it, which was annoying at times. I wished that the Wi Fi would automatically pick up instead of us having to enter the code every single time. Nonetheless, it was free, so I guess that's good. :p We redeemed points for our stay and for that reason didn't get the benefit of included breakfasts. Otherwise I believe that breakfast is included in the rate. There really isn't any breakfast place around the hotel, so we had to make sure to get some snacks/pastries for breakfast while we were out and about.

We really appreciated the daily turn down service where our rooms were stocked with water and local made nougats. We enjoyed the nougats so much we ended up buying some to bring back home.

Overall we enjoyed our stay at the Westin. The hotel was a bit too big, very business like, and felt somewhat less personal, but I think the good still outweighed the bad. Service in general was pretty good. We loved the location of the hotel as it was centrally located where we could afford to take naps in between our activities.

Next Post: Exploring Cape Town
Posted by Marcela at 7:04 PM