We weren't sure what to expect of the food at the safari. I thought it would all be meat and potatoes or something like that. Turns out the food at Kwandwe was quite elaborate and was not just simple meat and potatoes.  We definitely did not go hungry at our stay in Kwandwe. They really fed us well!  Food generally was pretty good...definitely better than expected.

Lunch was served between 1-3 PM, and we could choose when we wanted to eat in this time slot. Lunch was served in the main dining area, and there were indoor and outdoor seating options on the deck, when the weather was nice.

As mentioned above, lunch was a three course affair. There was a set menu with two options each for appetizer and entree. They also served bread, and I was always amazed at the perfectly shaped butter. :) 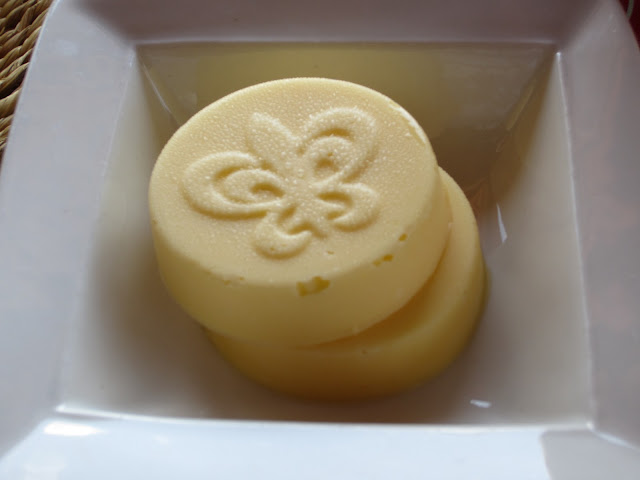 I got the baked tomato and brie and Dan ordered the carrot soup.


For the main entree, I ordered the beef keftas but after trying Dan's chicken/spinach wrap, I liked his food better. So we ended up switching. :)


We then shared one dessert which was poached pear with vanilla ice cream. It was pretty good and we're glad we shared instead of getting our own desserts since we were pretty full by then.

Afternoon tea was not that long after lunch, so we were still quite full. They had fruit, warm cake, granola, and salmon crostini. There was also iced tea and iced milk coffee. The cake was really good and was served out of the oven!

For dinner, the chef actually came out to each of the tables to explain the menu. Similar to lunch, it was a three course menu with a couple choices. As usual, Dan and I got one of each so we could try each other's food. I got the mushroom soup which was pretty good--creamy and not too salty.


I ordered the fish and Dan ordered the lamb shank. The fish was pretty mild and the vegetables were fresh and lightly drizzled with olive oil and cooked with some herbs. I was really full at this point so only had a couple bites.

Dan was amazed at the size of the lamb shank. He said it was a bit too much, tasted pretty good but not amazing.

As previously mentioned, drinks were included.  I had the house white wine, and Dan had the house red. I actually really enjoyed the house wines; they were quite mild which is how I like them.

About an hour or so into our morning game drive, our ranger surprised us when he pulled up to an area and brought out all the equipment to cook some crumpets! He brought the pan, dough, and toppings. Our tracker also made us hot chocolate with Amarula, which was a similar drink to Kahlua, but much lighter. It was so good!


The crumpets were excellent! They tasted very close to pancakes. I put some maple syrup and strawberry jam on top.

We got back to the lodge around 10:30 AM, and guess what?  It was time to eat (again)!  On the buffet table there were various cold meats, smoked salmon, yogurt, pastries, fruit, nuts, and dried fruits. There's also a juice machine and some guests actually made fresh fruit juice, which was cool.


I got some fruit, yogurt, nuts, and muesli. For some reason I thought this was it for breakfast. But lo and behold, Patrick came by to get our breakfast order. Apparently they also serve hot breakfast in addition to the huge spread!


We split an order of the daily breakfast special which was caramelized banana french toast with bacon. It was actually really good. The combination of the sweet toast and caramelized banana paired quite well with the crunchy slightly salted bacon.

We came to lunch a bit later than usual (around 1:45-2pm-ish) and chatted with another couple staying at the lodge who just finished their lunch and said that it was excellent. So we were looking forward to our lunch!

Similar to yesterday, it was a three course option. I ordered the grilled pear and crispy parma ham. I was a bit surprised that the dish was served at room temperature. For some reason I was expecting it to be warmer, but the taste was pretty good. It was an interesting combination having the sweet pear with the salty parma ham but it worked well.


Dan really enjoyed the artichoke salad. It was very refreshing!


My main entree was the duck salad. The crepe was nice, just the right thickness and worked perfectly with the duck. The side salsa salad was refreshing. I enjoyed this dish and preferred this to yesterday's lunch.


Dan ordered the kebab which was served with a pineapple fritter. I don't think I've had a deep fried pineapple before but it was really good. I think I ate almost all of it :)


We shared the white chocolate mousse which was served with baked peaches.  The mousse was excellent; it was creamy and there's small chunk of chocolate, and served slightly chilled.

We felt that we had JUST eaten lunch, but it was already time for afternoon tea. Since we were still full, we didn't have much for this afternoon tea time.

For dinner, there wasn't a printed menu and the chef again came out to explain to us the choices for dinner service.

For appetizer, I ordered the vegetable tempura with smoked salmon. It was very tasty! The tempura was served fresh from the fryer :) and it worked well with the smoked salmon and the refreshing sauce. 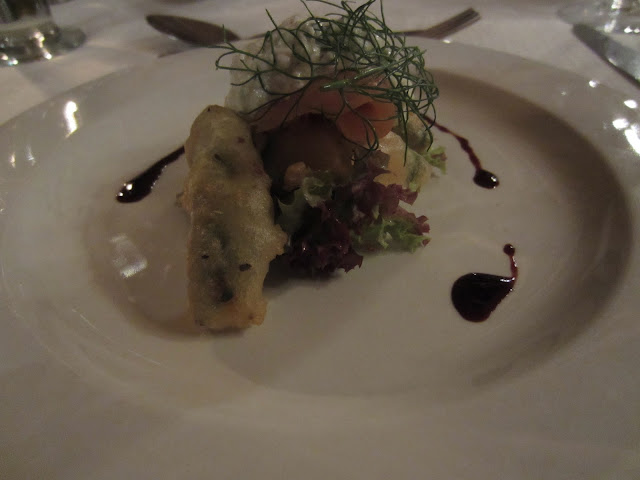 Dan ordered the tomato soup which was also pretty good. 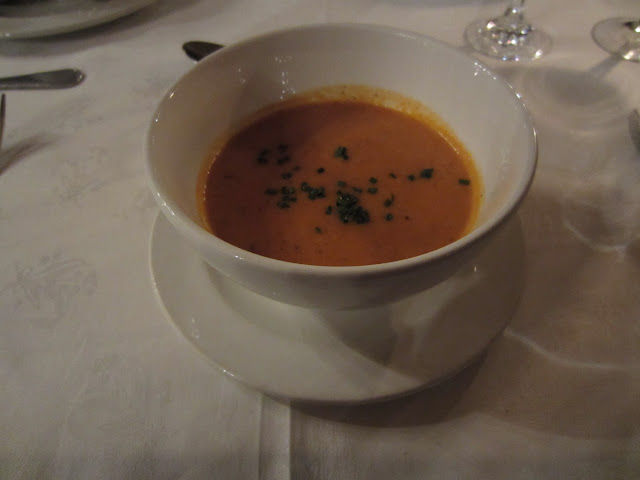 For the main dish, I ordered the pork belly which was served with vegetables. The pork belly was very crispy and reminded me of Chinese-style pork belly dish. It was quite tasty. 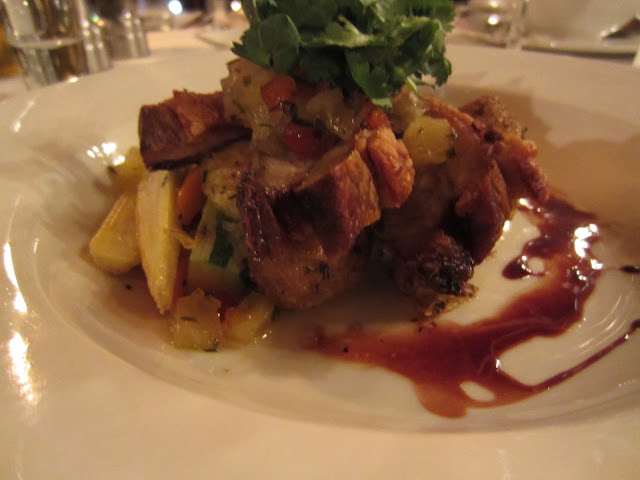 Dan ordered the Venison loin which he actually enjoyed.I didn't try it because I don't eat game meat. 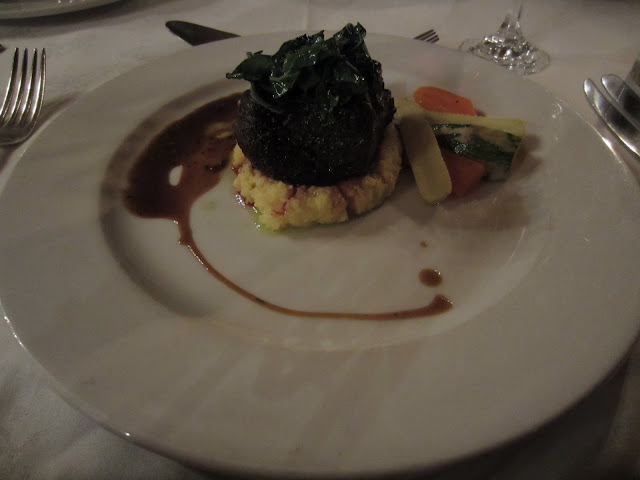 For dessert we shared the vanilla pana cotta, and Dan said this was his favorite dessert during our stay at kwandwe. It tasted like a soft pudding and wasn't too sweet, served chilled with strawberry sauce. 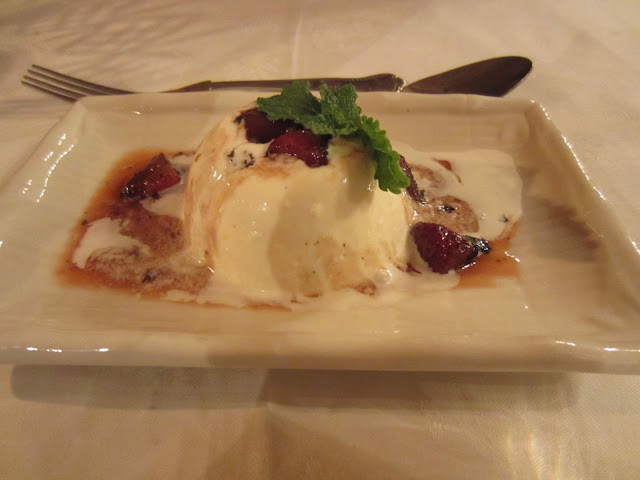 Today's snack was less elaborate than the day before. It was muffins with, of course, our favorite hot chocolate with Amarula! 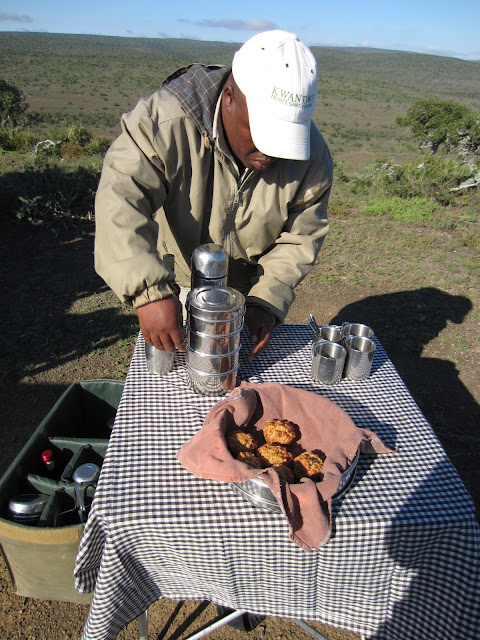 The breakfast spread was exactly the same as the day before. We ordered eggs and toast for our hot meal. This was our last meal at Kwandwe. :(

We were pleasantly surprised by the food quality at Kwandwe. It wasn't super amazing, but it was good. They definitely fed us a lot, and it's nice to know that everything was included (for the most part). There's always plenty of food, so we definitely did not go hungry. I felt that food was a big part of the safari experience since all we did was eat and then go on game drives, and eat more in between. :)