We checked out from Manor 38, and I had arranged for a transfer from Port Elizabeth to Kwandwe. Kwandwe was located by Grahamstown which was about a two hour drive from Port Elizabeth. The lodge does provide transportation at a cost, but it was pretty expensive, around $200 one way.  I did some research and was able to find a private transfer for half the cost. We used JC Shuttle for 700 Rand one way (around US$100). The car was a bit old and worn, but it did the job. I guess we got what we paid for. :)

When I was looking into safari options, I originally looked into the more well known Kruger National Park and lodges such as Lion Sands, which was featured on The Bachelor. However, after doing more research, I preferred a non-malaria reserves closer to Cape Town.  And since Kruger is considered a malaria area, that was out of the question. I started looking into Eastern Cape safaris and finally decided on Kwandwe.  Kwandwe is a private Big 5 game reserve in the Eastern Cape. It took me a while to decide to book here due to the pretty hefty price tag, but in the end we figured we would splurge on this stay. We got a pretty good rate from a specialized travel agent based in US.

Kwandwe was previously part of the "&Beyond" group, which is a well known high-end safari operator in Africa. It recently changed and now Kwandwe is managed by the Relais & Chateaux group. 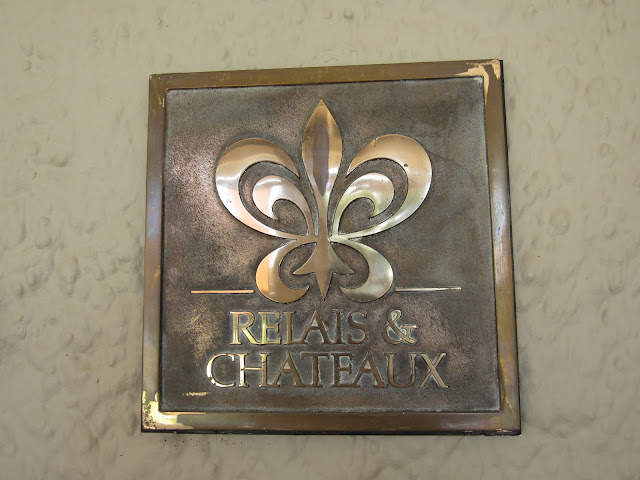 
We filled in some forms and also noted any food (dietary) preferences. We were then whisked away to the Great Fish River Lodge. The drive from the reception area to the lodge was around 20 minutes.


We were welcomed by Jure, the General Manager at the lodge. He was very friendly and showed us around the main lodge. He explained the daily schedule as well as what's included in our rate (which was pretty much almost everything with the exception of some premium, top-shelf alcohol).

The main lodge was where we met up for breakfast, lunch, afternoon tea, dinner, and where we would depart for the game drives. It was connected by bridge and walkways to the nine individual guest cottages.

There were several couches and seating areas to look out to a wonderful view of the Great Fish River. In the afternoon and before dinner, guests gathered around this area to have some drinks and chat. 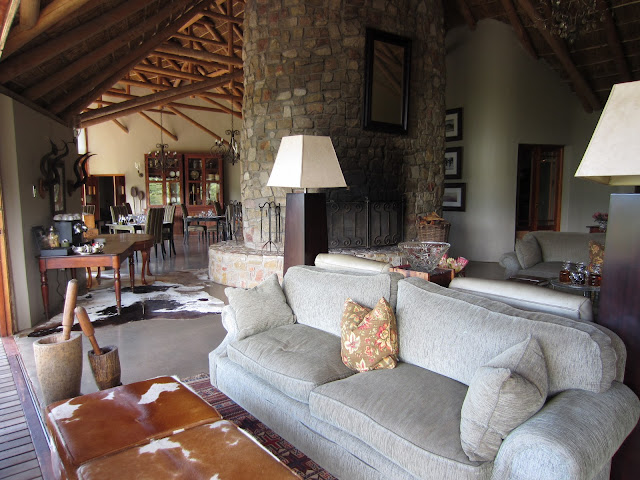 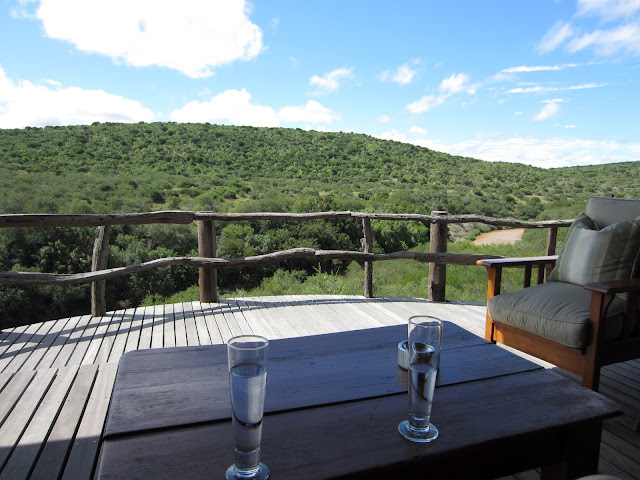 There was a library area which had computer with internet connection, as well as books to read. Wi-fi was free and worked well for the most part, though very slow.


I was so happy to found out that my favorite Grapetiser drink was available! :) Even laundry was included which we took advantage of, since by this time we have quite a load full of laundry already!


Our butler, Patrick, took us to our room. The lodge area was not fenced from the reserve, which meant wild animals may be found walking around, which was quite a scary thought. That's why I requested the room closest to the main lodge...haha.  During the day, we were free to walk from our room directly to the main lodge, but at night, a security person with a flashlight escorted us to our room.


Patrick, our wonderful butler, took us to our room and gave a mini tour. The room was beautiful with a colonial/traditional design. There was a personalized welcome note that was a nice touch. 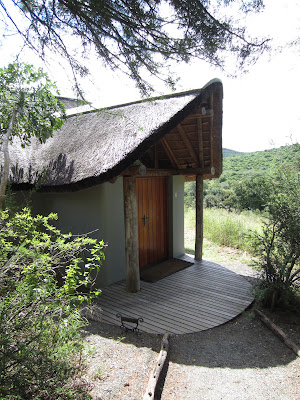 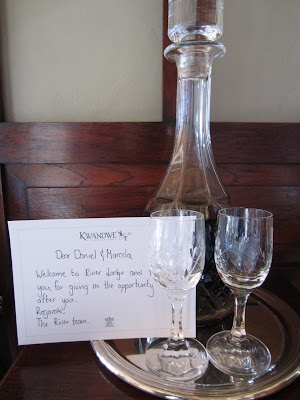 There was a king size bedroom, oversized couch, desk/office area, and a private plunge pool. The room had windows everywhere which gave it a very nice, open feel. 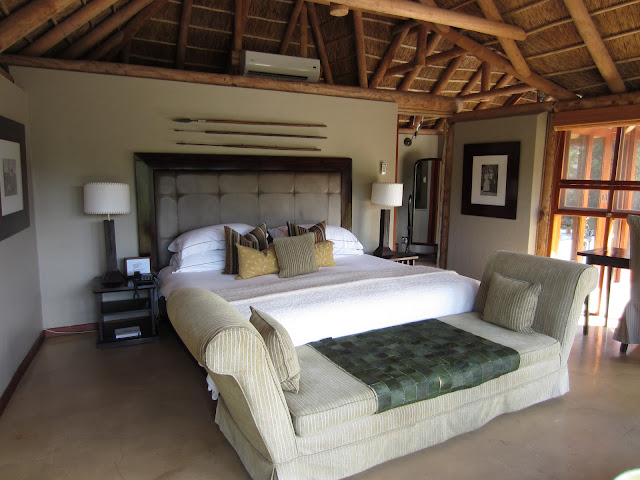 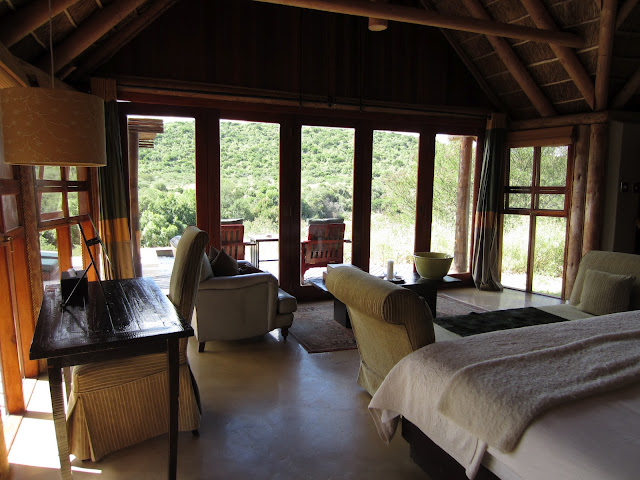 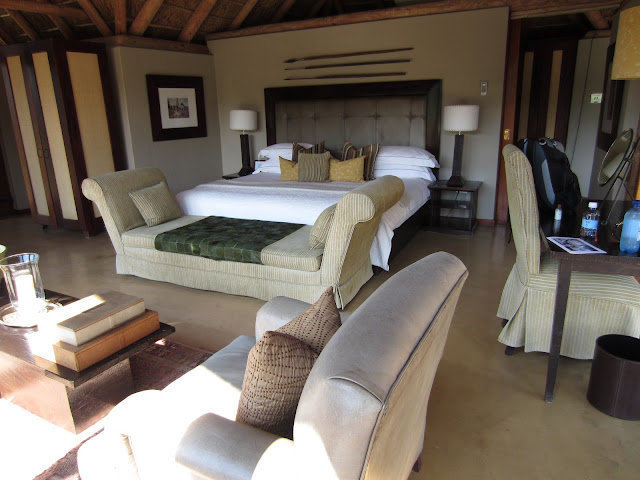 The bathroom included dual sinks, separate toilet area, a bathtub, and an indoor and outdoor showers. They even provided mineral water for us to use to brush our teeth.


The lodge was not brand new but was well maintained. Some areas could probably use some updating. One definite area of improvement were the towels which were rather worn and over-used. For a 5 star lodge, I think they could afford to provide some new towels. :) 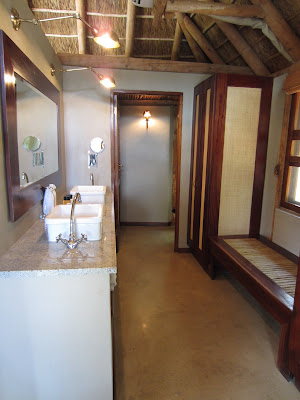 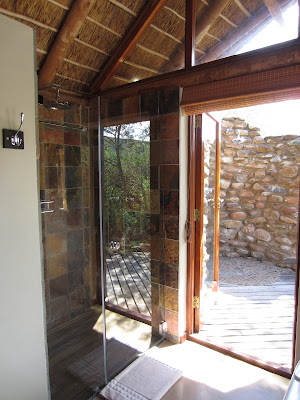 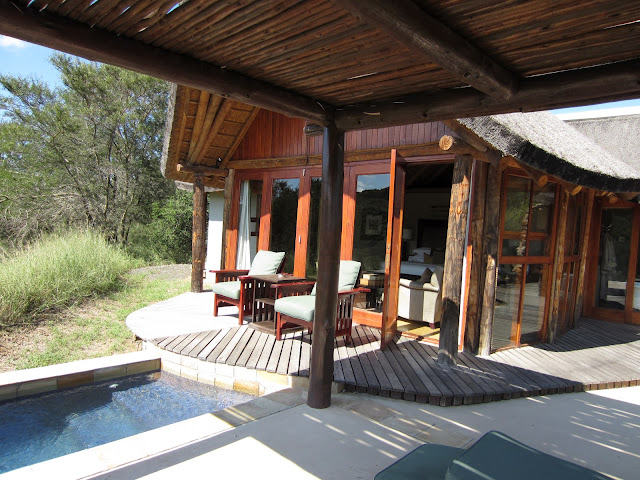 It was quite a treat to have our own seating area with vast views of the terrain, as well as our own private plunge pool. During our stay in March, the weather was around 70-80 Fahrenheit so it was nice to take a dip in the pool. The water was not heated and was quite cold but refreshing! 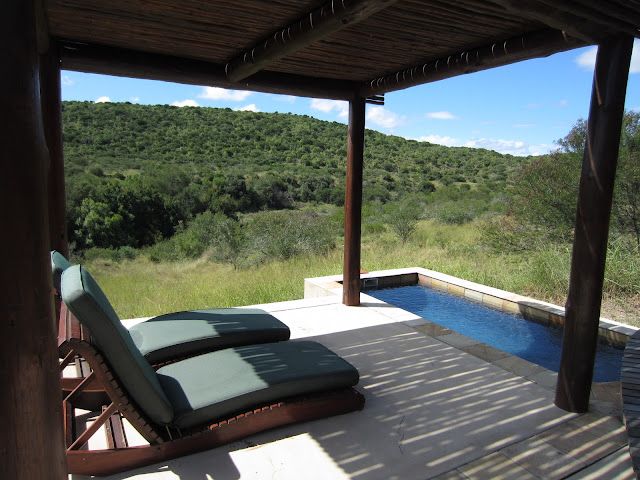 We were very impressed with the lodge and the service at Kwandwe. Actually, this was probably the best service we've had anywhere. Everything we asked for was always answered with "my pleasure"; they truly made us feel like royalty.

We loved our stay at Kwandwe Great Fish River lodge. We absolutely took in the slow pace of life while we were at safari. We were somewhat disconnected from the world (there was no TV in the room, which was actually nice), and it was really a great feeling to be in the middle of nature. It was scary at times to think that a wild animal could show up at our balcony at any time, but I guess that's part of the thrill. We thought that safari would be a once in a lifetime experience. But we are now looking forward to our next safari...someday. :)