One of the main reasons I tagged along on this trip to Chicago was because we wanted to dine at Alinea, one of the Top 50 restaurants in the world. I first heard about Alinea from reading a magazine article about the chef who battled tongue cancer and his 3 Michelin star restaurant in Chicago. The more I read about the restaurant and the cuisine, I became really intrigued. The restaurant was also recently featured on Andrew Zimmerman's bizarre food in Chicago.

Alinea is one of the few "molecular gastronomy" restaurants, which is a very modern style of cooking ingredients very uniquely, in a state that we're not used to seeing.  For example: frozen olive oil (vs. traditional liquid version), helium/gas candy (vs. typical soft chew version).

I made reservations about two months in advance by calling the reservation line and was able to get a table pretty easily, although only the 5 PM and 9:30 PM times were available. We took the 9:30 PM reservation since we weren't sure what time Dan will be done with his work. When I made the reservation, they also asked if we have any food preferences or allergies, since they typically serve a set menu.

We actually took the train from the hotel to the restaurant since the red line goes to Lincoln Park, where Alinea is located. The area seemed like an upper class neighborhood with various shops and restaurants. We walked a couple blocks and saw the small sign for Alinea. The building looked very unassuming from the outside. 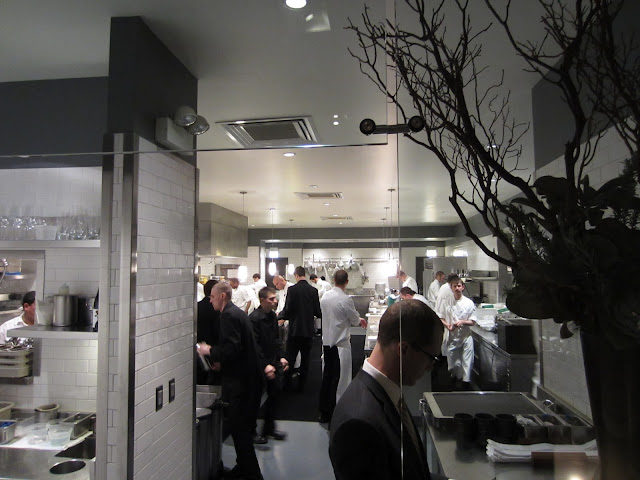 We were greeted warmly and the host took my coat. We came a bit early, so we waited around 10 minutes and watched the busy kitchen. I was surprised to see that many people in the kitchen.

We were taken upstairs for our dinner. All the servers wore jackets and looked very formal. The room decor was quite minimalistic and very modern. There were 6 tables in our particular section, and there were several more tables in other parts of the restaurant. What was interesting was that EVERYONE was taking pictures of the food. Usually Dan & I are the odd couple taking pictures before each course, but here at Alinea, everyone was taking pictures. 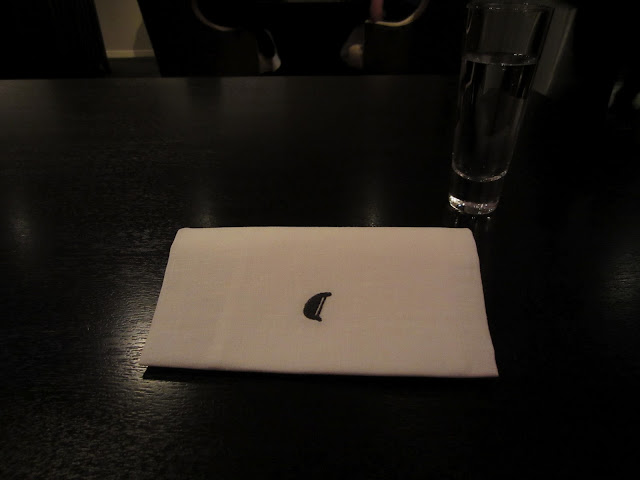 The sommalier introduced himself and asked whether we wanted to do a wine pairing, to which we said no. :)  We each did get a glass of wine though. The first item that was placed on our table was this ice sculpture with 2 holes on top. There was no explanation on what it was or instructions on what to do with it, so it just sat there for a while. 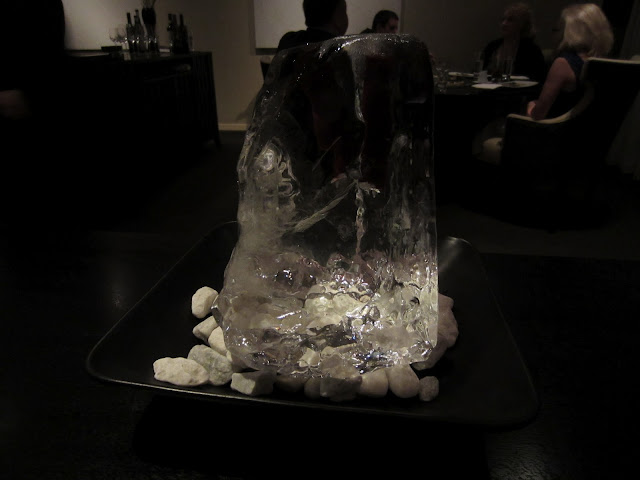 The waiter then came with our actual first course. The portion was tiny but it was very satisfying. The carrot was in a jelly form, and the combination of the sweetness of the carrot and the creaminess of the coconut jelly and the roe's pop was wonderful. We knew we were in for a great night!


The second course was actually four separate bites. The presentation was amazing! There were four shells with various things inside, and they were all set on this big piece of wood covered with seaweed.
Our waiter explained that the leaf tasted like oyster, which it totally did! The rest of the dish was amazing as well and each bite was unique and stood on its own but they were all similar in a way (seafood).


The waiter then brought this contraption that looked like something I used in my high school chemistry lab. The bottom part had boiling water and the top had dried vegetables. The water would boil and move up to fill the top part and then would drip down again and changed color due to the extraction of the juices from the vegetables. It was very interesting to watch!


Here's a video clip that we took:


So we wondered if the meal would be soup? But then the waiter brought out the actual meal which was mashed scallop that tasted like tofu, and the broth from the boiling water was poured over the tofu.The scallop was really good, and the consistency and texture was very much like tofu. The seafood smell was very, very subtle.


Our next course was this funny looking squid served on a metal rod with no utensils. Our waiter explained that we were to eat this by basically biting the squid off from the metal with our mouths. The squid itself was served a bit cold and didn't have a very interesting taste, so it wasn't very memorable to me.

Our next dish was inspired by a "fish bowl." From the presentation, it totally looked like one. :) The best way for me to explain this dish was a cold, green curry with tuna. The tuna otoro was served sashimi style, chopped in small cubes and served with curry foam and what tasted like creamy/cold coconut milk.


The next dish was probably my least favorite. In fact, I had Dan finish mine. The ice block with the beet/licorice drink had been on our table the whole time -- but it wasn't served until now. I guess they wanted to cool the liquid before we drank it. We were given this thick straw, similar to bubble tea straw but made from metal to drink the juice. I don't like beet or licorice, so the combination of the two was just not my thing :p


The next two dishes were probably my most favorite ones!! The burn morels was different mushrooms cooked in different ways. Every stone had a different taste. They all had a very smoky/mushroom flavor and were wonderful!!! I just remember savoring each bite and telling Dan this was SO GOOD!

The hot potato cold potato was probably one of Alinea's most popular menu items, and one that has been on the menu since it opened. The portion was actually very, very small. The soup was a cold truffle/potato cream, and to eat this, we were instructed to slide the metal out from the bowl so that the hot potato ball with the shaved truffle "falls" onto the soup, and then we eat both the "hot" and "cold" potato at the same time. The hot potato ball was very warm, soft, slightly cheesy, and the combination of that with the cold potato soup with the truffle was so amazing.

For our next dish, we were presented with this tray of 60+ unique ingredients to accompany our meat dishes. Each ingredient was unique, and so the thought was that we choose one for each bite, therefore creating unique flavors for every single bite. It was really cool visually, and the idea was great. But I actually didn't really enjoy this that much. I don't know what each one was so sometimes I got a "surprise" when the flavor turned out different than what I thought it...he he. 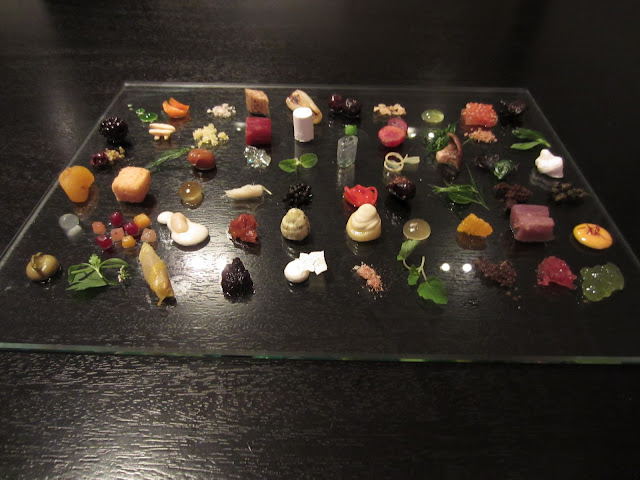 I had the chicken prepared 3 ways, and Dan had the lamb, also prepared 3 ways. The meat was cooked perfectly, and the dish itself was great. I just wasn't sure that I liked the tray with all the mystery ingredients. :)


Oh and if you noticed the interesting captions--"Chicken ?????????" and "Lamb ????????"--those were the actual names of the dishes printed on the menu. The question marks signified the mystery ingredients.

I love everything with truffle. This one was no exception. It was a small bite size ravioli, filled with this yummy broth--reminded me of an Italian version of Xiao Long Bao. The ravioli literally explodes in our mouth and we could taste the truffle, cheesy broth inside.


The waiter sprayed some fruit alcohol to wipe our table clean, and it was because the next dish was served ON the table. He brought out several spoons which were placed somewhat randomly (or maybe it was in a particular order) on our table, and then we were told to eat one right after the other with the squab at the very end. I liked this dish better than the "60 mystery ingredients." Almost everything tasted good, and it all blended well together. The squab was cooked perfectly and tasted amazing even though it was a bit rare for my usual liking.


When I heard the description of the next dish, I knew I would like it immediately. It's basically deep fried brie cheese!!! I love brie, and I love deep fried stuff. So this was the perfect combination. :) The fried brie was served on a cinnamon stick which served a dual purpose: as a stick to eat off of (utensil) as well as an aromatic enhancement to our meal. Needless to say, this dish was really good as well.

Ok, this next course was actually my LEAST favorite (tied with the beet/licorice liquid). It was five different fresh ginger, prepared in different ways. I am not a ginger person and some of it tasted very raw to me, so it was hard for me to enjoy.


Now we moved into the dessert courses. The first one was very interesting. There was a small bowl in the bottom filled with dry stuff that I couldn't figure out exactly, and on the top was a glass plate with blueberry, macadamia, and cream. The waiter then poured what I think was liquid nitrogen into the bowl which started to bubble up and become this "cold, sweet soup" to be eaten with the blueberry & macadamia.


Our next dish was a balloon!!! It was an edible apple taffy balloon. How cool is that? We sucked the helium out of the balloon, and then chewed the taffy to our delight.

The next dish was the dessert finale. The waiter put a rubbery table cloth on our table and brought out the ingredients.


A dessert chef then came out and created an art piece on our table. He "painted" and "painted" and at the end, he took the chocolate shell on the left and crushed it on the table 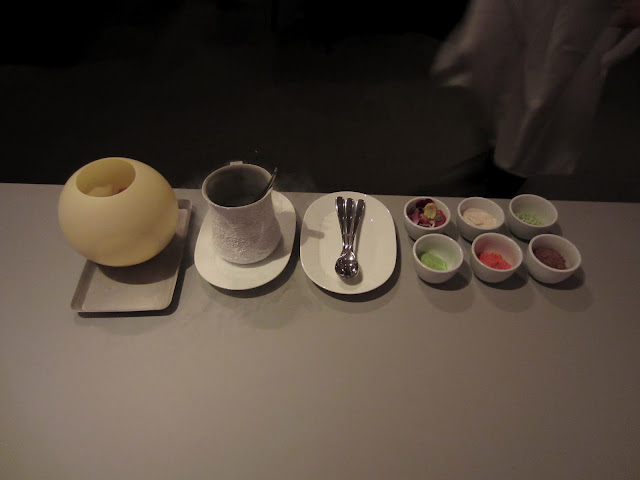 Here's a video preview to give you a better feel of the experience:

Here's what our dessert looked like at the end. Pretty cool, huh? We ate directly off the table, which was kind of weird. The strong flavors were the tangy strawberry and the subdued english pea. I just randomly grabbed stuff that I saw on the table: white chocolate shells, frozen cream puff, cotton candy, frozen cake, merengue, and flower petals.


At the end of our meal, we were each presented with our unique personalized menus. I counted and there were a total of 19 courses.

The dinner was fixed price for $210 per person ++. You can substitute stuff if you have any allergies, but other than that, the dinner was pretty much fixed. There's not a smaller course option.

Thoughts:
Overall we thought the dinner was excellent, and we both preferred it over the French Laundry. The majority of the dishes were excellent and very unique....of course there were some dishes that I didn't care for, but the overall impression was still superb. The presentation was just amazing, something that we had never seen before.

Our reservation was at 9:30 PM, which was probably the last seating. The dinner took around 3 hours total, so it was pretty late by the time we left the restaurant. I would recommend actually getting the earliest reservation if you can (i.e: the 5:00 PM reservation) as opposed to a later one. The reasons are two fold. First, you will actually finish dinner at a decent time. Second, you will be the first one to see all the amazing presentation and food. For us, being on the last seating, we saw everyone else get their food first, so it took the element of surprise away from us. Although, having read this blog, I probably have spoiled it for you also. :)

We were glad we got to try Alinea, and it was definitely a great way to celebrate our 2 year anniversary!