It was already time for me to head back to the US.  So my family dropped me off at the airport, and I checked in around 2 hours before departure. The lady at the check in counter commented how long my route was to get to SFO, since I was connecting through Singapore, Seoul, and LAX. Hehe..if only she knew I chose to take the longer routing because I wanted to try Asiana's business class.

The first leg was Jakarta to Singapore. Business class was actually full. Almost every single seat was taken. The actual seats were the exact same type as my Singapore to Jakarta flight, which was an older plane with the 2-3-2 configuration. The stewardess was very friendly and offered newspapers. When I said no, she offered if I wanted women's magazines and of course I said yes!

Even though the flight was only 1.5 hours, Singapore airlines always offers full dinner service.  I pre-booked the vegetarian Indian menu but wasn't sure if they got the order, so when the flight attendant walked around, I ordered the beef dish which she took. She then went back and asked whether I ordered the vegetarian menu and that they had it prepared, so in the end I ended up eating the vegetarian food. I am not a vegetarian but I do enjoy Indian food--that's why I ordered it. :)


The male attendant then walked around and offered bread and gave me 2 Indian roti that he said was prepared just for me since I was the only one who had an Indian meal.

The dessert was actually quite good and was served together with the main meal. There probably just wasn't enough time to serve dessert separately for such a quick flight. The dessert was a fruit pudding which I almost finished. Soon enough it was time for landing. I transferred to terminal 3 to catch the connecting flight to Seoul.


Terminal 3 looked pretty new and prior to this trip I have never visited this terminal. I didn't have much time so I just took a quick look around the lounge. 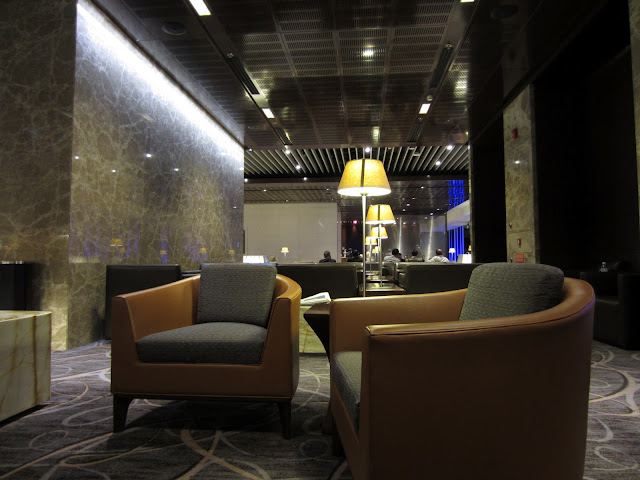 This next flight wasn't full--probably at 60 percent capacity. I noticed that there were no first class seats on this plane. The configuration was 2-2-2, and I was in one of the aisle seats.


This was a red eye flight, but I actually really liked the timing since it was comfortable enough to actually sleep. The stewardess noted my pre-selected menu item, slipper lobster thermidor, and asked whether I wanted it for supper or breakfast. Since I was still super full from the Indian meal, I asked for it to be served for breakfast, although the thought of having a lobster breakfast sounded a bit too heavy!

I watched the first 10 minutes of The Vow before falling asleep, not because of the movie but because I was genuinely tired. I was woken up by the stewardess 1.5 hours before landing for my lobster breakfast. :p  It was actually quite good; I really enjoyed the creamy sauce! I also had a piece of croissant but declined the yogurt since I was way too full! I finished watching The Vow and actually cried during the last scene. I'm such a sucker for chick flicks! I was dreading my 8 hour layover in Korea but at least I could rest at the lounge. 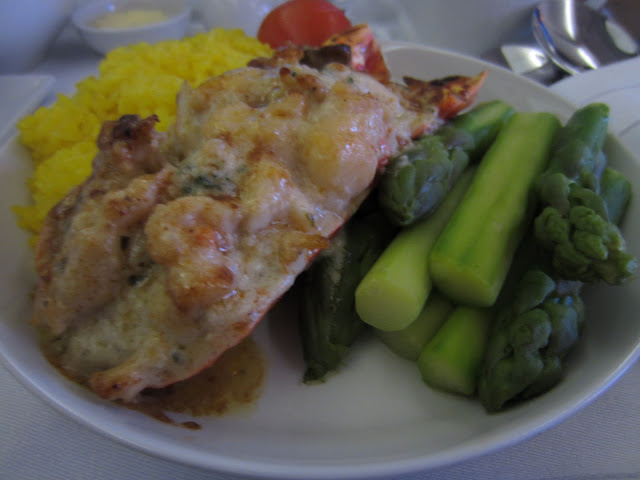